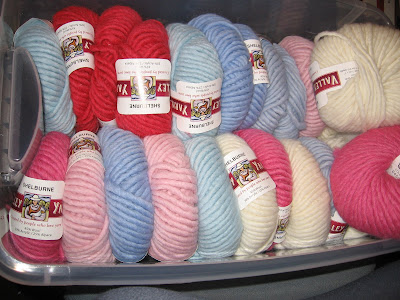 Remember when I said my Evil Twin had been shopping and I had no idea what she had bought? Well, it came today.
This mixed lot of Valley Yarns Shelburne. Very soft pastels--pink, blue, green, rose, red, and white. Gee, I wish she had at least left me a note as to what she expects me to do with this!
Wouldn't that have been sporting?? Simon thinks so! 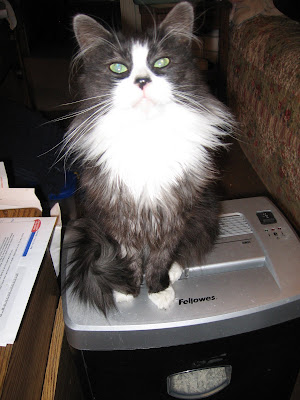 Of course, he also thinks he's much cuter than the yarn. I have to agree. Right here--this pose--is the reason I have to keep the shredder unplugged unless I'm sitting right here. He thinks it's a great perch. He's also been known to turn it on.
I don't want to shred even one hair of his lovely fur coat, so I keep the shredder off.
Check that paw action! Does this boy know how to pose, or what?
Anyway, there was more in the mystery package.
Lots more.
This stuff: 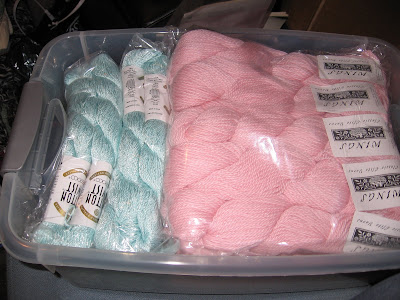 Classic Elite Wings. In pink... PINK!!! I so don't knit with pink!
Well, I guess ET has other plans for me, wouldn't you say? The other yarn in this container is another of ET's impulse buys, Berocco Cotton Twist from elann.com. At least it's a pretty ice blue. I can actually think of something I would make (and wear) in this color. I think maybe ET is searching for her inner girly-girl. I just wish she'd do it with her OWN credit cards! 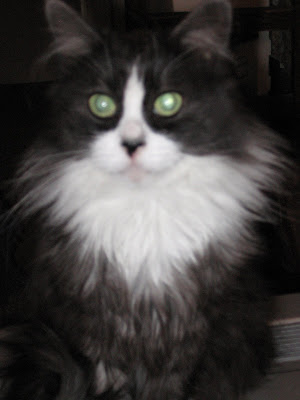 I have made a very startling realization. I'm sure this will come as no surprise to anyone else, but it was a shock to me. Here it is: I can only knit on one thing at a time!~
That's right. No matter how many WIPs or UFOs I have in process at any given time, I can only have my hands on one at a time.
No wonder I make such slow progress!
Next, I will probably start to figure out that it's impossible for me to knit while washing dishes, or folding laundry, or doing any number of other necessary but excessively boring chores. Why, yes, Simon, I also can't knit and feed cats simultaneously.
This kind of amazing insight will, I'm sure, serve me well. At least I can post and shred old bills at the same time. I think I'm going to go put a log in the fireplace and sit and knit and watch the news. Or maybe I'll just have a glass of wine. After all, I've done some heavy-duty thinking here!
(Note: I also did a pretty fair amount of heavy lifting today, as we got in lots of new books and changed out some displays. Book-hefting has to be good exercise!)
Posted by mehitabel at 8:50 PM 8 comments:

Move Along, Folks, Nothing To See Here... 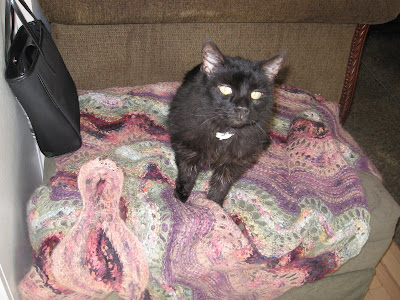 ...well, except for a rather gratuitous cat photo. This is Chucky, my grandkitten. He normally doesn't look like a fruit bat--I guess it's the overhead angle that did it. He's pretty fluffy and pretty big, also pretty old--we think he's at least 19 but could be 20. The afghan is my first Ab Fab, the English Garden colorway, still one of my favorites. It lives with Chucky, D3, her husband and The Grandcarrot. He's been a rock n' roll cat as well, had his picture taken with #1 Son's roommate The Rock God. When #1 married, his roommate asked if Chuck could stay with him, and that worked well until he (Rock God) was touring more, at which point Chuck moved back with #1 and family. When they in turn relocated to the East, Chuck stayed with the house, which D3 bought from them.

This has nothing to do with anything except as a reason for the picture. I have been pretty quiet lately but apparently my Evil Twin has surfaced and has been doing some heavy-duty shopping. The worst part is that she knows my credit card numbers and leaves me to pay the bills!

Why, just this morning, she ordered some yarn from Webs. She must have done it while I was in the shower. I forgive her, though, cause she did order my favorite colors and at $1.99 a ball, it's reasonably priced. I could also blame Dim Sum Mary but really, it's my own fault for letting my guard down.

ET has also hit Webs a couple of other times--she hasn't told me what she ordered, either, so it will be a complete surprise when it arrives. She did an order to Eddie Bauer, too, but most of that is going back. I keep telling ET that the name of the game is Reduce, Re-use, not Replenish, but she doesn't listen. Do you think she's related to Sheepish Annie's HM?

Anyway, the shredder has been busy again too. I found a great resource for record retention here which has given me the boost I need to clean out my paper monster. When I get done, the important stuff will go into the safe deposit box, the current records will be easily accessible, and I won't find myself at the beginning of NEXT year madly entering stuff into Quicken so I can get my taxes done! Oh well. That's what I said last year too. That's why everything up through March 2006 is already entered...

As if that wasn't enough new-brooming for one person (well, two if you count ET), we're also reinstating our family Biggest Loser challenge. The big weigh-in will be just before Easter and the stakes are $50 per person. Since the only one who doesn't need to (and shouldn't) lose weight is D5, she's the stakeholder, weightmistress, and general cheerleader. You heard it here, folks--now help me stay honest, and make a good effort to win this thing! At the very least, I can unload the 20 0r so extra pounds that have made themselves at home in all the wrong place.

Back to the shredder. Can I just say that if the bag doesn't open fully, or if it falls off the bucket, it makes a hell of a mess?
Posted by mehitabel at 10:24 PM 4 comments:

And a Happy New Year to All! 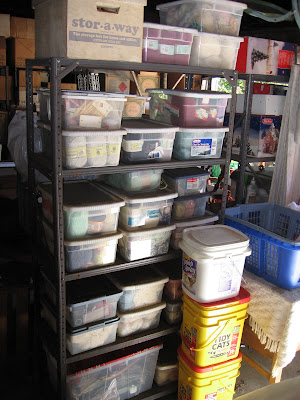 My stash runneth over. This is a shot of the garage stash annex. Some of those tubs have been there for, well, a lot longer than I care to think about. The box is holding squares for an afghan that my mother knitted, and which I really should assemble and finish. I really should. Except that I'm not fond of brown and orange. Or acrylic. But my mom made it. By the way, she died in 1991, so we are talking about a number of years here! This thing will be old enough to vote soon.
Question: do I count it as a UFO if I intend to finish it for her? Or does it NOT count because, after all, I didn't start it? Quite a conundrum, isn't it?
In other news, we here in the Greater Pasadena Area will be hosting our annual Tournament of Roses extravaganza. If you live outside of the country--heck, outside of SoCal, you may wonder what the big deal is about a rose parade and bowl game. It's a big enough deal that the main thoroughfare through Pas (aka Colorado Blvd, for reasons I have never known) is now lined with people camping out for the night to secure a good viewing spot. Most of them will be too tired and too cold tomorrow morning to really enjoy the parade--but it's the experience. (Personally, I think it looks like a gigantic homeless encampment, but what do I know?)
I will be watching the parade broadcast--or, more likely, rebroadcast--from the comfort of my living room. Might even put a log in the fireplace and have a toasty fire, there will be fresh coffee and cookies are baking as we speak. Oatmeal cookies make a tasty breakfast--just like having oatmeal with raisins and brown sugar on it, right?
Prime knitting time!! I'm hoping to get a few more tiers in on my Lady E's--#1 just needs about 4 more to be done, #2 has 10 tiers done, so they will be good parade companions.
And yes, I have seen the parade live and up close. In fact, for several years, my girls were volunteer float decorators, and we had the glue-stained fingers and sweatshirts to prove it! D1 even got to be a float escort one year, standing watch over her float during a torrential rain. Of course by the time the parade started, the usual sunshine was beaming and all the floats looked lovely. My current job is right on the parade route, as was a previous job--we would take the VW bus, back it up to the wall of the parking lot (conveniently, about 6 feet above street level) and the kids could stretch out on blankets in the back (or back-back, as they called it) and watch. And the quilt shop was right there for coffee, hot food, clean bathroom facilities...
Anyway, here's wishing a very happy new year to you and yours. May all your resolutions be good ones, and be achieved by the end of this year!
Posted by mehitabel at 10:17 PM 3 comments: