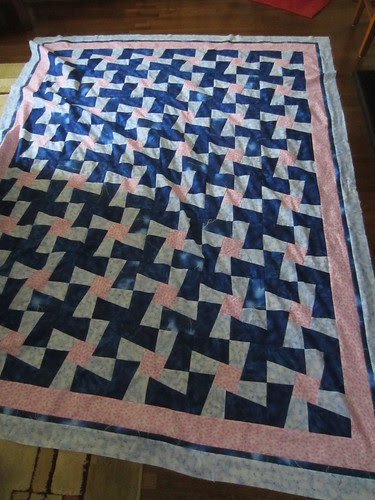 Been working on this quilt top for the last couple of weeks--there are more progress pictures on Flickr. Now the top is done; the binding is cut and ready. Just need to find a back for it--and, oh yes, quilt it!

This is a "legacy" project from Drs. Harry and Ellin--the notes in the package are dated 3-12-05 and I think may refer to this quilt, although the colors aren't specified and I know they made several using this pattern.

Most of the light-and-dark blue pieces had been cut, as had the pink squares for the centers; a couple of them had been sewn, but the whole thing had been set aside. Once I started working on it, I found I needed a little "intervention" with Jack (the ripper) to get it on track again. Then I found the real problem, and the reason there was another piece of dark blue almost-matching fabric in the box: it was short by 18 pieces to finish the 48 blocks.

A little cutting and sewing later, and the blocks were completed. I don't happen to mind sewing partial seams, so this went together very nicely. I'm not sure that this is the way I'd have chosen to do the borders, but it's what there was enough fabric for, so...

I like it. I'll get it finished and hopefully will be able to give it to Harry, along with the two "layered" quilts that I've already begun quilting.

Ellin, I hope you approve!!

Posted by mehitabel at 7:04 PM No comments: