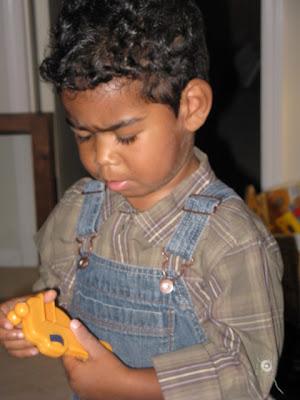 Also known as the day after Halloween.

So here's a few shots of the hijinks that went on last night. Construction Worker Garrett (gee, sounds like the name of one of the Barbie-doll family!) came complete with hard hat and tools. in this picture he is definitely sporting some hard-hat hair, which as all construction guys know, is an occupational hazard.

Next we have Auntie D4 and Garrett's dad trying to get pictures of the mini-burglar and mini-vampire.

You know, I take so many pictures of them all by themselves, and you don't get an idea of how little these kids really are. I think this picture does it. 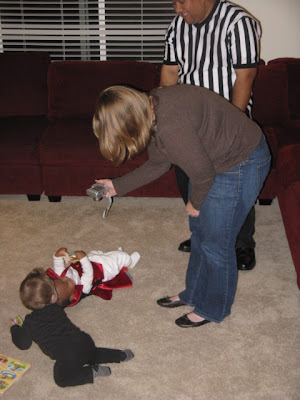 Pilot Scott, aka Audrey's daddy, is definitely the Halloween Freak in the family. 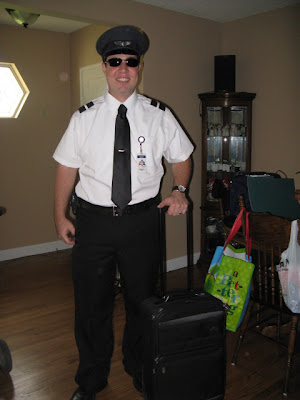 He's the one who orchestrates all this madness.

If you check the Flickr page (and his, which is linked from Audrey's blog) you will see some of the great decorations he put up. He was feeling bad because it wasn't as spectacular as other years--no air compressor, for example. Still. There was a full-on graveyard, complete with a vignette of the grave-digger who fell into the hole as he was preparing to inter a coffin (which was standing by) and the Grim Reaper waggling around gleefully. There was a spinning skull with a strobe light, a flying ghoul, a ghostly apparation--and the mummy. Which was rigged to a motion detector, and which flew up to a standing position, eerily lit by red lights and accompanied by noises.
Pilot Scott was so convincing that, when he went to lunch, someone asked him which airline he flew!
He's a fitting dad for the littlest burglar! She tolerated not only her burglar-hat and gloves but also the mask. 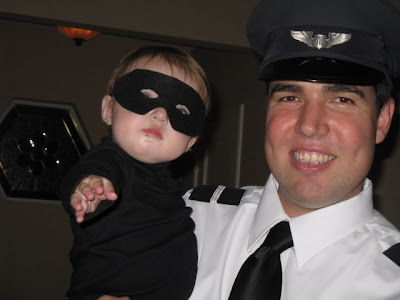 She and Vampire Cousin Nate had a lovely time. Lots and lots of adults to fuss over them, kids coming to the door--one little tyke was heard telling her smaller sister that, "See, it's a nice lady with a cute baby and a really scary house!" 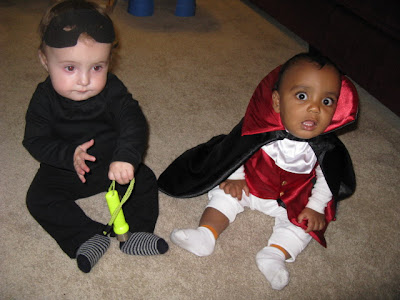 Nate's cape has little elastic bands that slip over his wrists so he will look as if he is "flying." The vest and jabot were just the finishing touches.
And that is his natural hairline, by the way. It, and the funny way his top teeth came in, are what inspired the costume. His upper two side teeth came in first, giving him that "baby vampire" look. Of course, by now all of the teeth are there, so he looks like a "normal" baby.
He is the happiest, giggliest baby (his only competition is his giggly cousin) but whenever he sees a camera, the eyes open wide and the mouth goes "O" and that's it. Hopefully one of these days I can post a picture of his dimples!
It's November and that means NaBloPoMo again. National Blog Posting Month--a can, er a post, a day is all we ask. I kinda flubbed up last year, and again back in August when I tried this, but you know me--never give up. So cheer me on, ok! (Got some yarn in the mail. Pics tomorrow!) 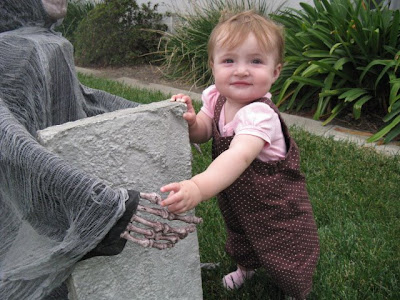 Just extending a hand of friendship to wish you a happy Halloween!
Hope you have a haunting good time, whatever you do. 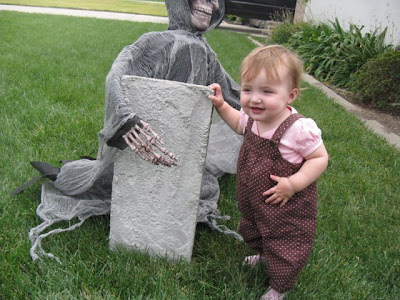 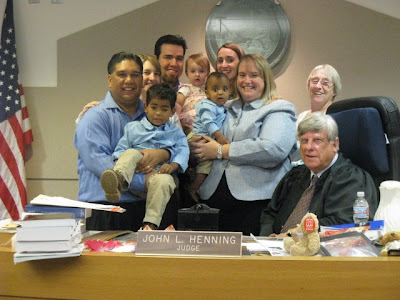 Normally going to court doesn't have the best connotation, but every once in a while, it means something good.

It means that little Nate is now Official.

That's the judge who signed the papers making him now and forever the child of D3 and hubby, brother to the Grandcarrot, and cousin to all those other kids.

I love the look on his face. It's as if he's saying, what am I in for now?

Not to worry, little guy, just more of the same love and attention and affection you've been getting since you were born! 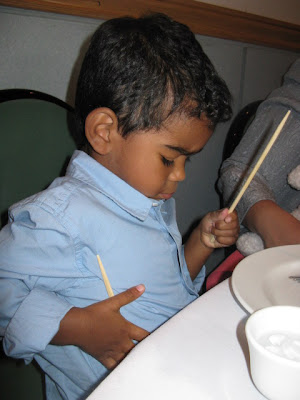 Since Blogger puts pictures up in kind of random order, you're going to be seeing them that way. I'll try to make notes to make sense of this.

And yes, I know I can reorder the pictures. Hey, how long has it been since I posted? And you want to make it harder for me?

Anyway, the celebratory luncheon after the adoption proceedings was at our favorite Chinese restaurant. Here's Garrett with his chopsticks. 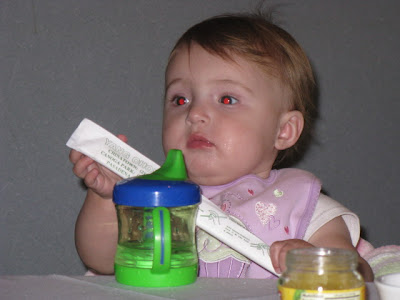 He has a little way to go before he's as good with them as Tori and Lizzie.

Audrey's trying to use hers, too.

I hate the red-eye. I really need to learn to use the camera software to correct that.

Maybe once the house is finished? All the boxes emptied? 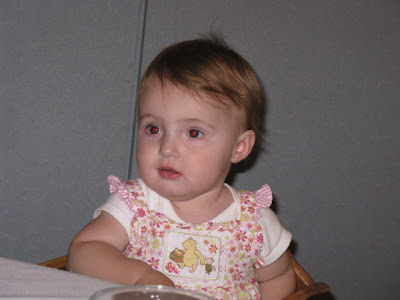 She really was enjoying the afternoon.

Garrett was playing with the blocks that Auntie D5 made. They were a gift to Nate, packed in that blue starry bag which D5 also made. 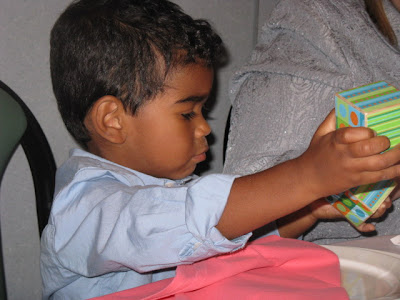 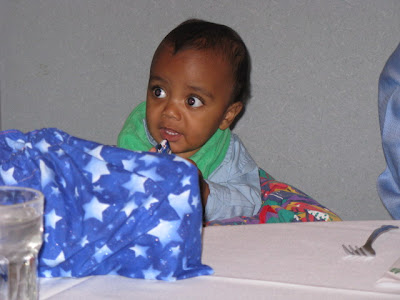 Here's another courthouse shot, this time just the family with the judge.
Hey, at least we didn't have to go to Utah this time! 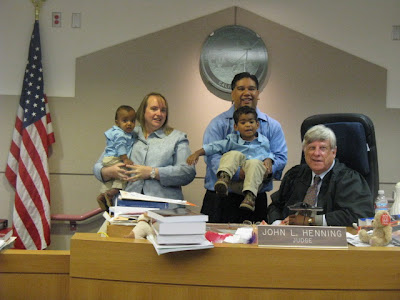 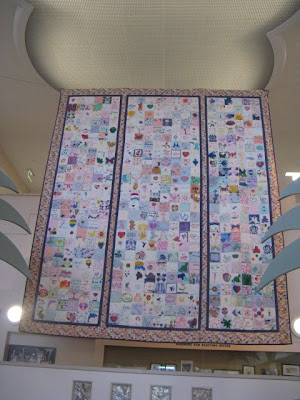 In the courthouse, as you walk in (after going through security check of course) there is this huge quilt hanging on the wall. Each of the 4" blocks was done by or for a different child--a reminder of what this particular courthouse is dedicated to.

We did some sitting around outside while waiting for our hearing time to come up.

Well, some of us sat. Some stood up and walked around. 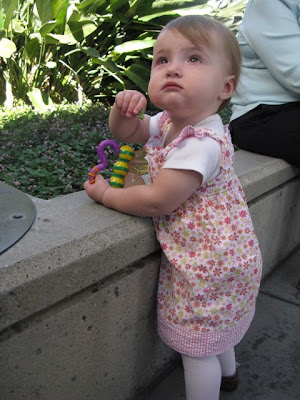 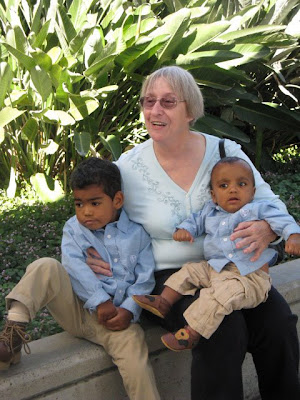 And some let themselves be wrangled by their memere. Yes, they would have preferred to be off and running. Well, Garrett can run. Nate has mastered the "Army crawl" although he can get up on his hands and knees. He will also stand up holding on to hands or something supportive.
All in all, it was a big day and a happy one. For a while, we were able to kind of set aside worries and troubles and all the rest of the everyday cares, and just focus on what makes us joyful: family. Near family and far family.
As usual, more pictures on my Flickr page; you know the drill!
Thanks to everyone for their good wishes and happy thoughts for us all!