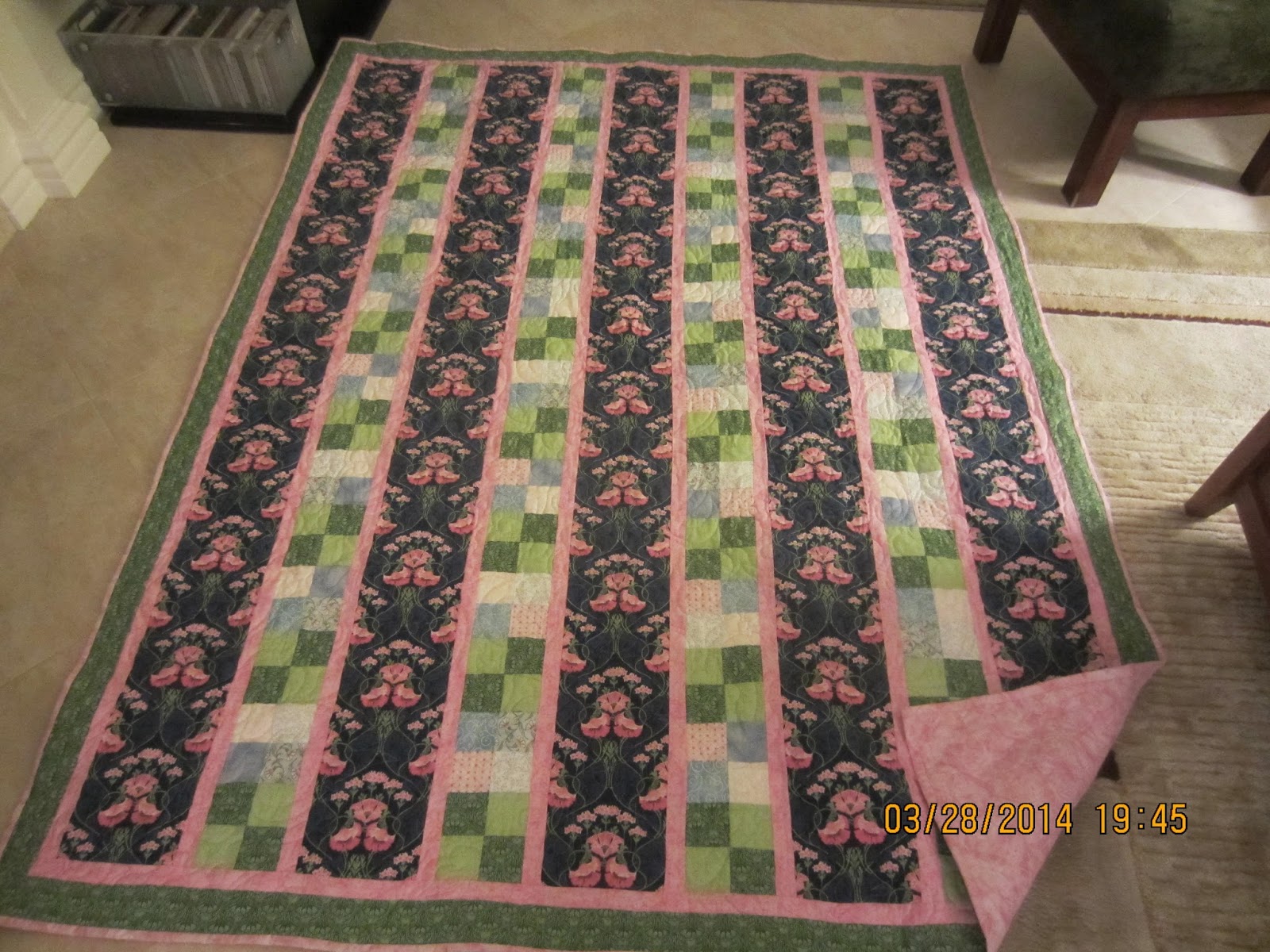 I'll tell you what's shaking--the ground! We're in the middle of a swarm of earthquakes, which are centered just a few miles south of me. There was a medium-strong one last night (5.1) followed by a series of aftershocks, the largest of which so far was a 4.1 today. One of my daughters lost a large mirror that was mounted over her fireplace, but other than rattled nerves we haven't had much damage. Closer to the epicenter, there have been water main breaks and some homes and apartments red-tagged to prohibit occupancy.

It's been quite a year so far, with fire, flood, and now earthquakes. 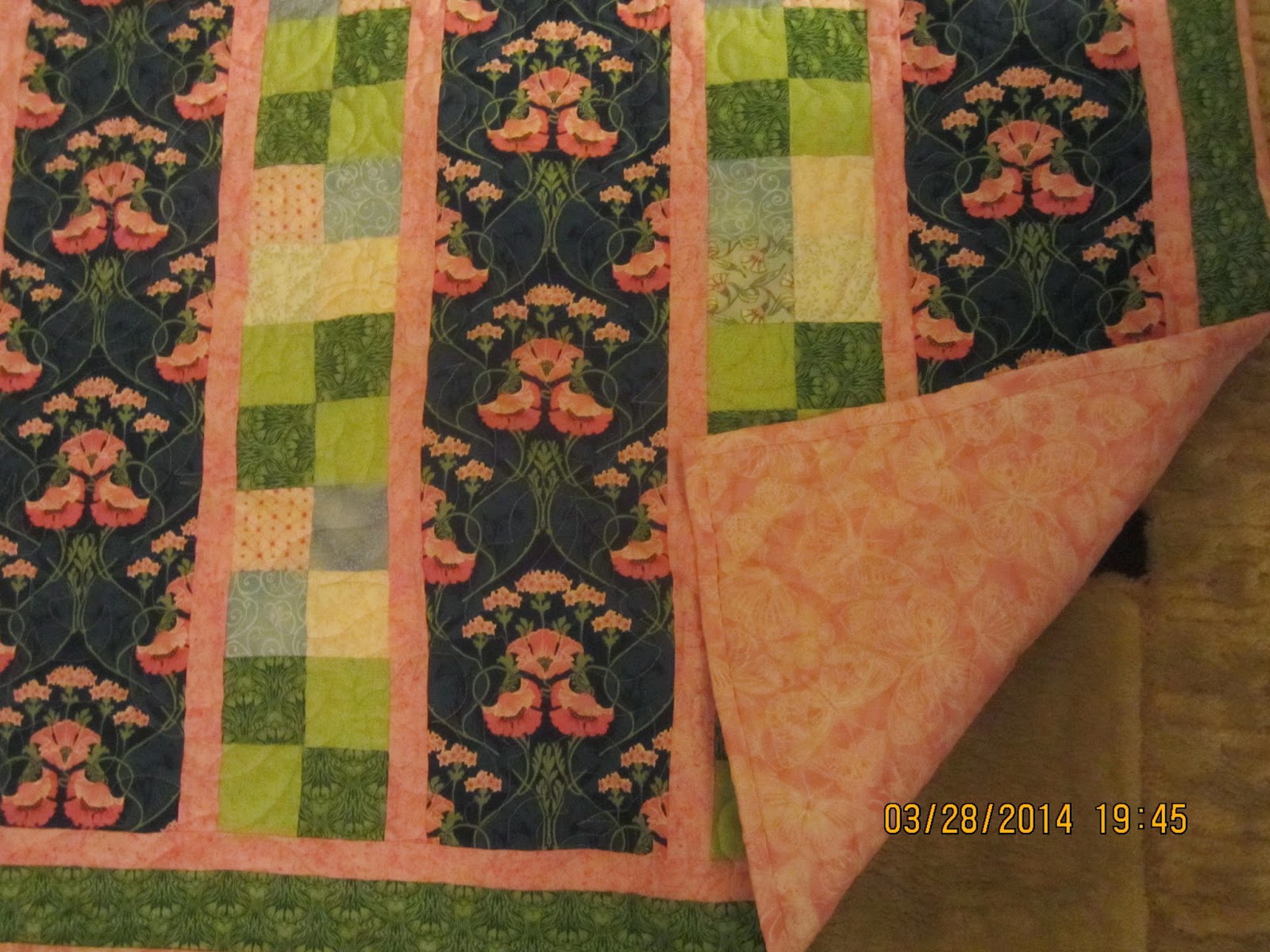 I was going to do a post about finishing up this quilt, but obviously my attention was distracted, so it's a bit late.

The color on the top picture is probably closest to the real colors--I took these in late afternoon so there's some artificial light issues. There's also some glare off the French doors. Whatever, it's done!

Added to the list of finishes for the month and the year. Now on to other projects! 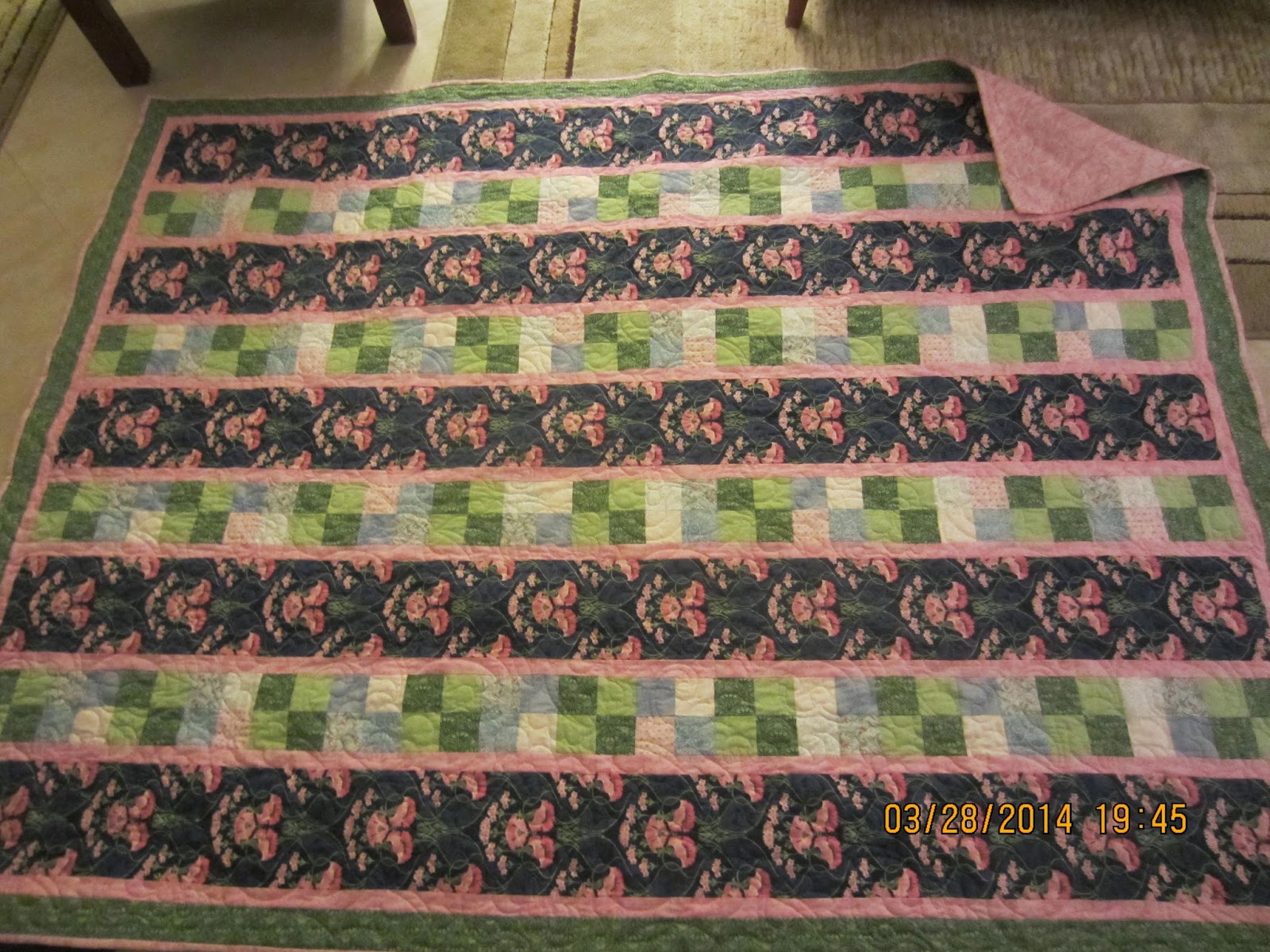 I really do like this pattern! It's from Judy Hopkins' book, Triangle-Free Quiltmaking, and she calls it Dandelion Wine.

I don't remember who made the blue Art Nouveau-feeling print. I do love the feel of it! The 4-patches alternate pink and blue with two shades of green; I altered the pattern slightly by putting a separator strip on both sides of the fabric stips. Judy only used one. For her design, it worked; for mine, I like the pink break better. 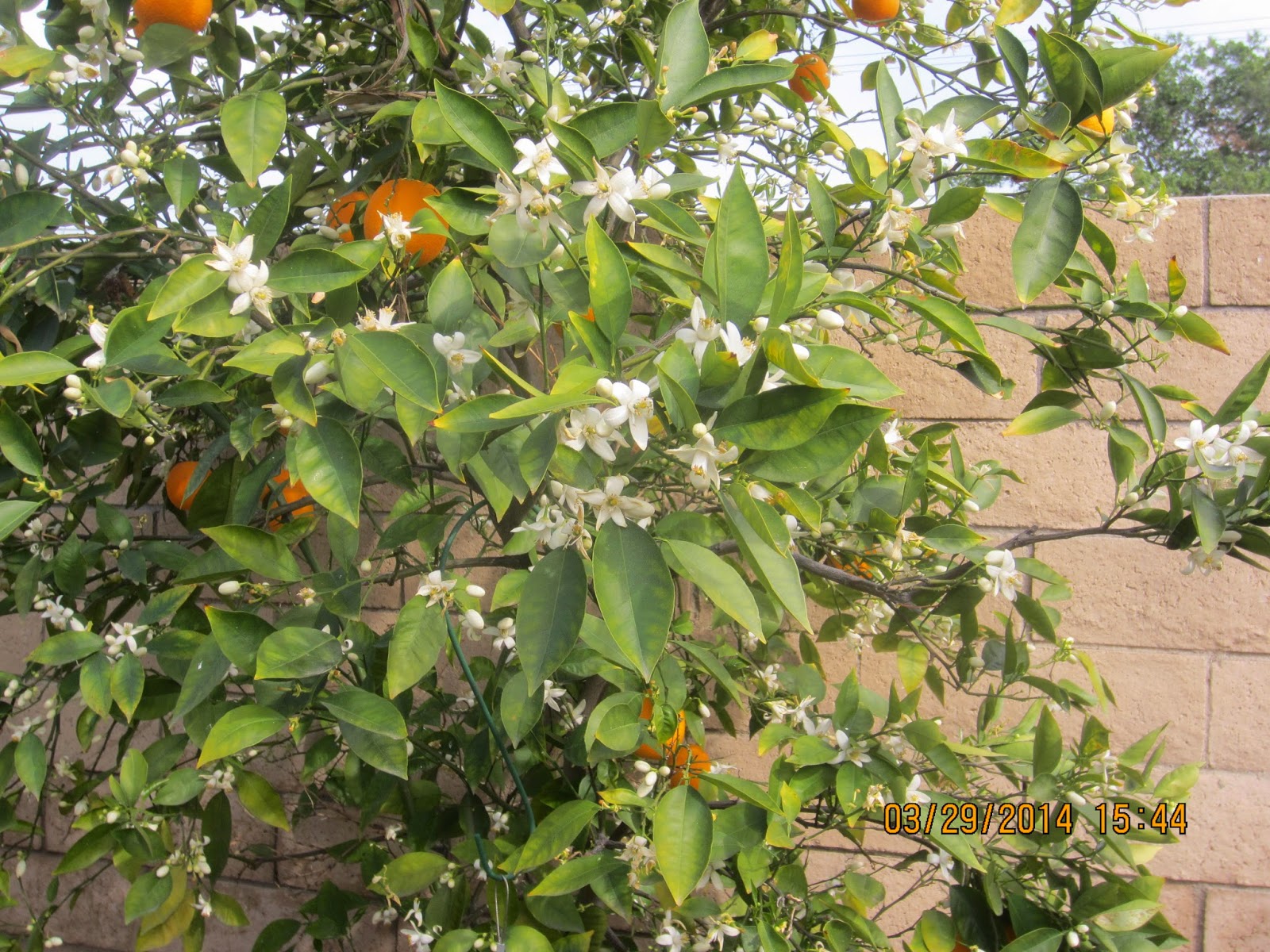 If the pattern looks vaguely familiar, you can hark back to one I finished last year that was made by my "quilting doctors" which I finished up for them. It had strips of Yukata cloth printed in indigo alternating with red and navy 4-patches. I can see using this design, or a variation of it, with a lot of fabrics that have a srong vertical repeat that you'd like to emphasize.

My orange tree is blooming! It still has oranges ripening on it as well, so I guess it's going to be a year-round thing? 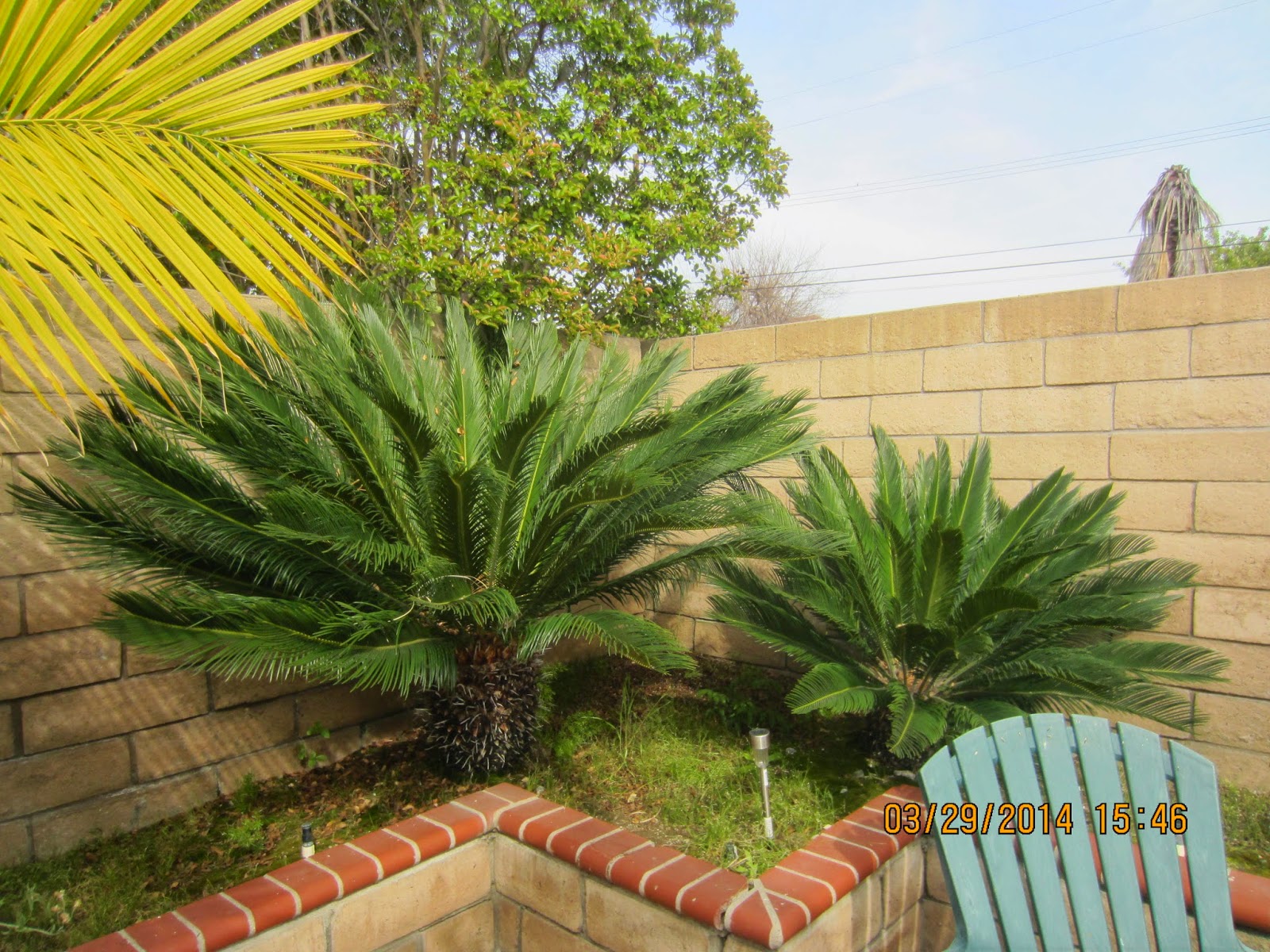 I've never had citrus trees before, although there were some next door. Guess I didn't pay enough attention since they weren't my responsibility! Now I have 3 citrus trees, two of which look sickly to me.

Time for a visit to the local nursery!

I've also got two tall palm trees, both of which are currently bearing fruit that doesn't look particularly edible. Then there's the smaller palm--you can see its yellow fronds there--and two sago palms. For someone who doesn't much like palms, I suddenly have five to care for! 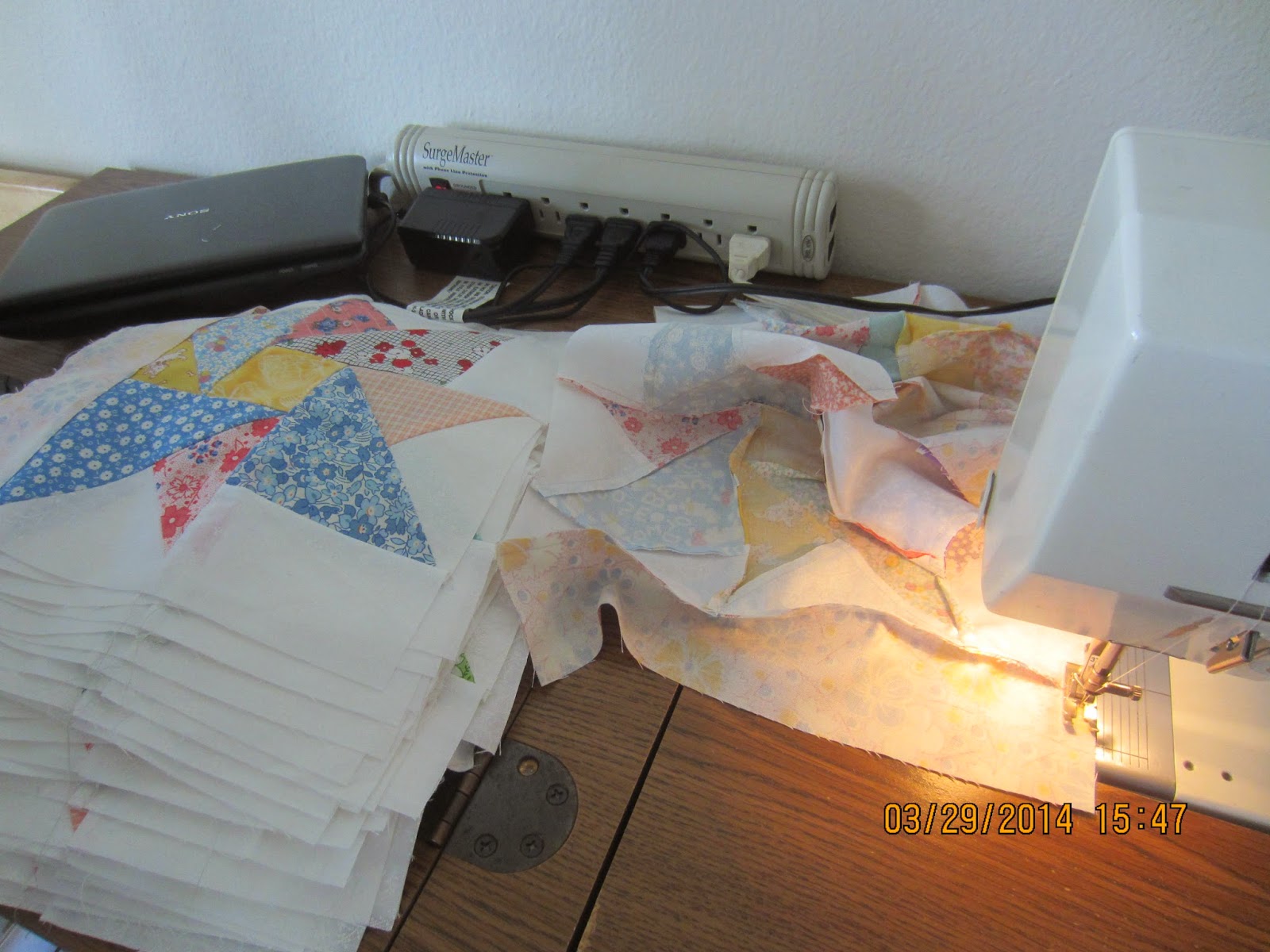 In between rocking and rolling, I finally managed to get back to the sewing machine.  Still plugging away at the pinwheels.

Managed to get 30 done out of the second batch of 150 today. It's a bit of a slow process because, although I'm adding the sashings in a semi-random way, I'm trying to make sure that each block looks aesthetically pleasing. That means choosing the sashing that complements the colors in the blocks. 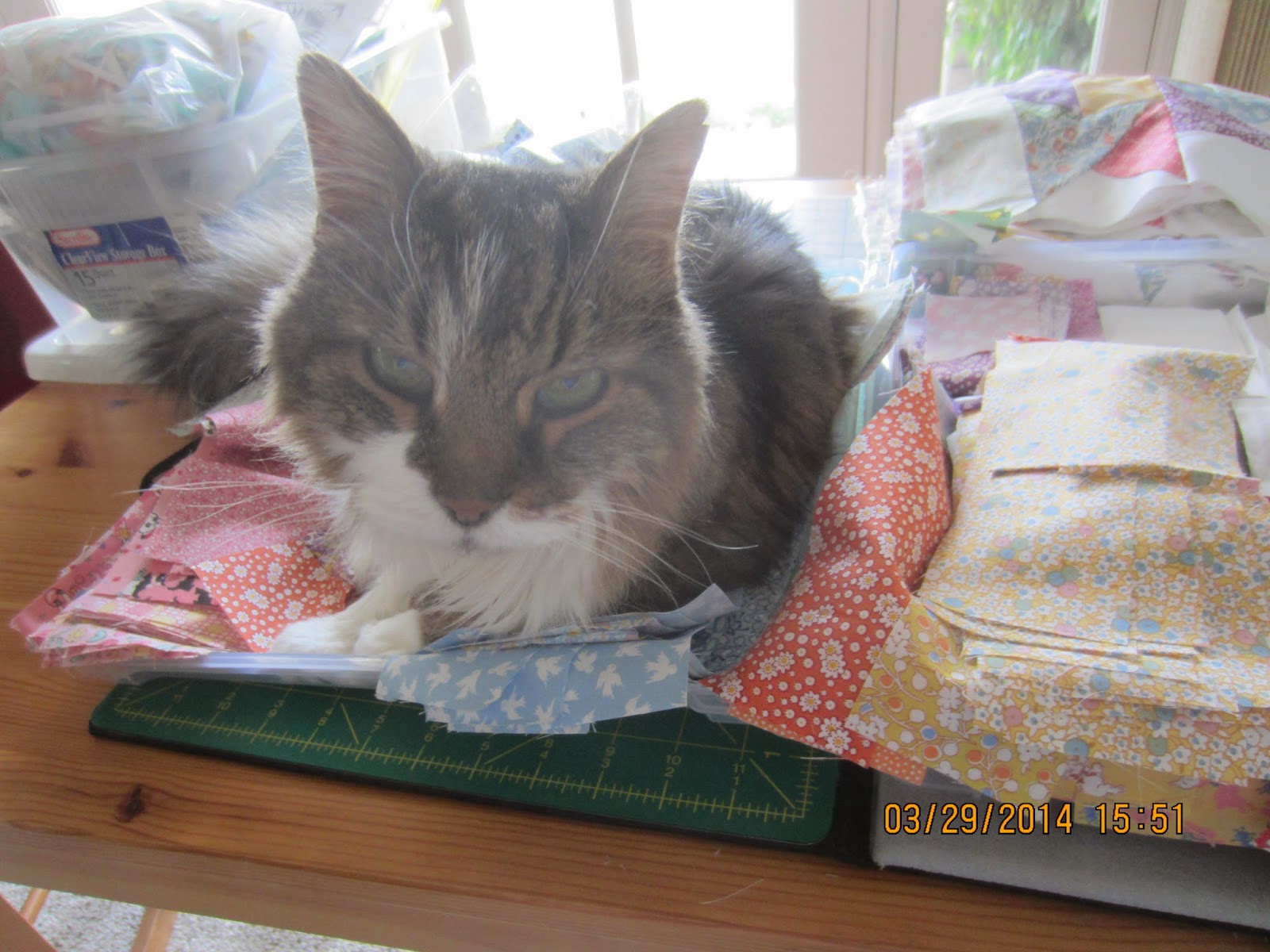 I have seven basic colors of sashings--red, pink, blue, yellow, orange, purple, and green, with lots of variation within each color family.

They're sorted into stacks so theoretically I can pick up a yellow or a pink strip if I think it will work, without having to ruffle through the whole mess.

In practice, though, I have to disturb my helper, who seems to think he's an integral part of this project.

When I pick a color that's under him, he gets up and moves to the other half of the stack. 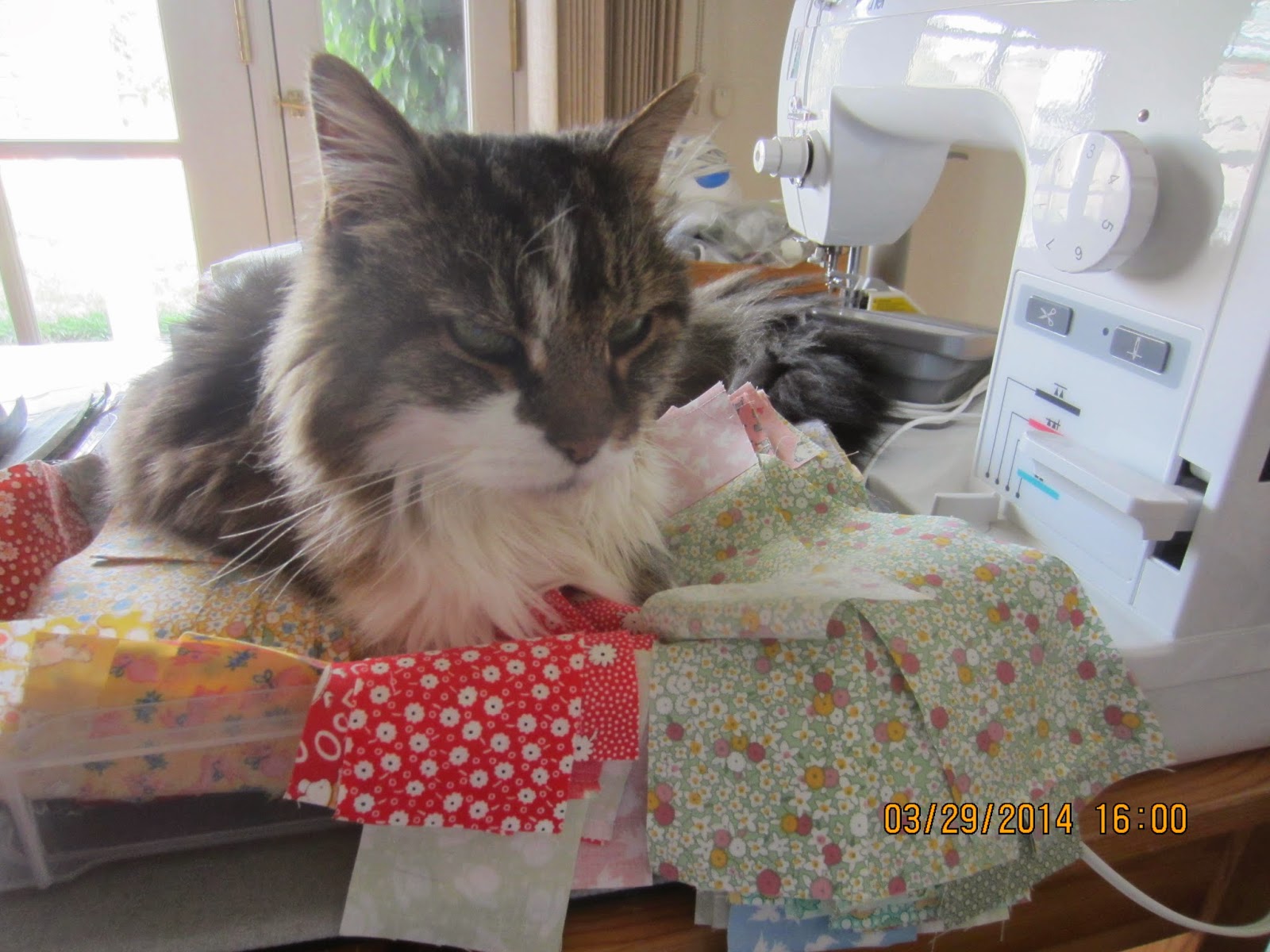 This is only good till I need a color he's now covering. Today it took 8 moves before he finally, with a very disgusted air, moved himself to the rocker, where he fell asleep. .

So much for accomplishing anything! At least I've made it through another day and another series of aftershocks--I don't know if it's reassuring or not that I can tell when the small ones are happening, and can then confirm my feelings on the USGS website. Whatever! I think it's going to take a nice glass of wine to help me relax and sleep again tonight!
Posted by mehitabel at 11:47 PM 3 comments: