An FO and a Conundrum 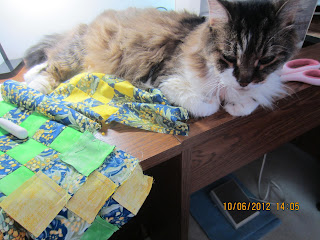 This is beginning to be a pattern. I turn on the machine, and HiHi comes running to see what's going to happen. Well, if he has any say in the matter, it's going to be skritches and pets and headbonks for the cat. He's not at all concerned that I had to rip out some blocks and put then in a different way. 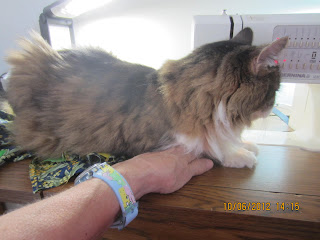 He's helping. Or thinks he is, or maybe he just really doesn't want me to sew. But I'm determined, and he gets bored pretty easily. So he wandered off eventually, and I was able to continue with this: 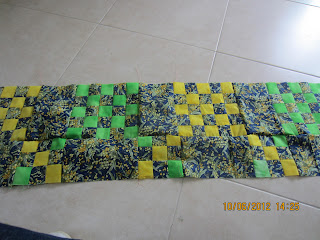 Here's the first set of blocks with the sashings and cornerstones, in the right configuration this time. I know, doesn't look that different, does it? 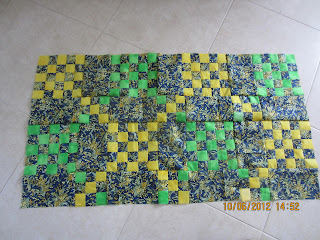 And that's when I made an interesting discovery, which led to still more ripping and re-sewing. You see, the sashing strips aren't all the same.  So there was more headscratching, and more work for Jack (the ripper), and more re-sewing. However, I got into the groove... 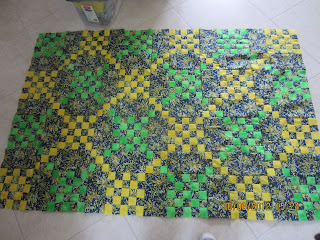 This is what it looked like before I put on the border and the final cornerstones. 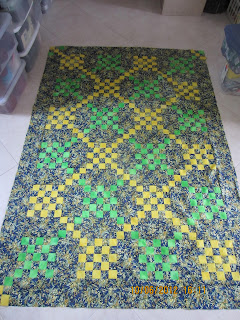 Here it is, all done. Pressed, too, ready for layering and quilting... 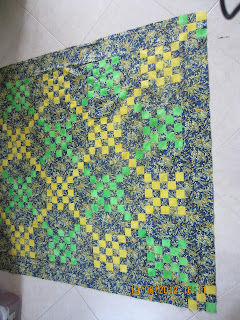 I like the way the colors work with the background fabric. Even though it looks pretty grey in these photos, it's not--it's a deep royal blue with bright flowers on it. 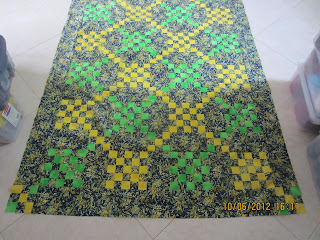 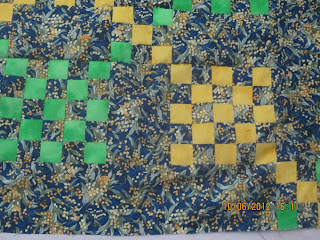 I think the strong green and  yellow, which are NOT solids, stand up nicely to the busy background pattern. It's cheerful, and I think it will be fun to quilt. 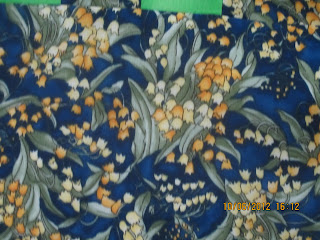 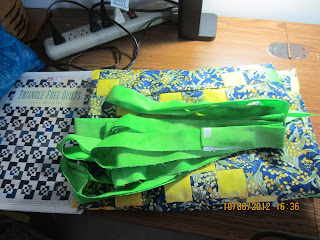 Figured while I was at it, I'd go ahead and cut and press the binding, too. That book is the one from which these patterns came--well, at least the inspirations. I do love Judy Hopkins' books--she gives very clear instructions, and enough leeway to allow for improvisation.

Now there's another problem: what kind of borders to put on the Art Nouveau poppies. Here's three of the fabrics--and yes, all of these are in the quilt itself. 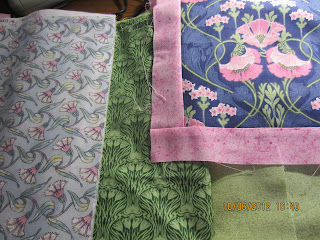 I was hoping to use that pale blue with the stylized carnations on it, but it's pretty wimpy next to the strong colors in the strips. The dark green is my favorite so far, but it's directional, and if I cut it that way, there wont be enough. The carnations are directional, too, but not as strongly. In addition to the greens and the blues here, I also have two more pinks, and plenty of that bright pink to use again. I'm thinking it would make a good binding.

Yes, I have enough of the poppy print to cut for a border. I also have 19 of the assorted 4-patches, which I thought about using in a border too. I'm concerned about them pulling too much focus. 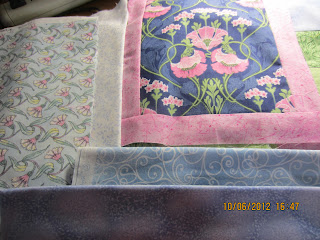 So... it's been put away for a little while, to marinate. It's not as though I have nothing else to work on...and after all this, I do want to get this quilt "right."

Posted by mehitabel at 7:34 PM No comments: 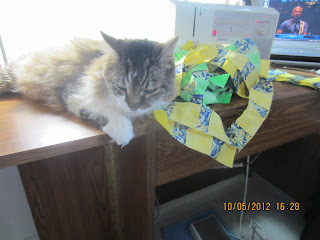 Ahhh, time to work on another elderly UFO. Got the video thing going on, got my partially-sewn 25-patch blocks ready to go. And of course, the Supervisor is on duty. This position? I could probably work around this a bit. After all, I'm only adding 2" block sets to this chain... 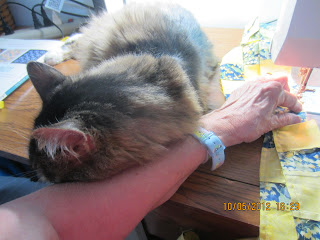 But apparently that isn't enough togetherness for someone. Okay, this pose works for me. After all, I've sewn with a cat draped across my shoulders (Bailey thought that was where he belonged, especially if I was sitting down. Loved that little furboy!) So a cuddly cat on the arm kind of works.

This was also my Photo A Day shot. The theme was "shadow." All I could think of was Stevenson's poem:

"I have a little shadow who goes in and out with me,
And what can be the use of  him is more than I can see."
--R.L.Stevenson

Well, I guess he's keeping my arm warm. After all, it got down to 80 today. 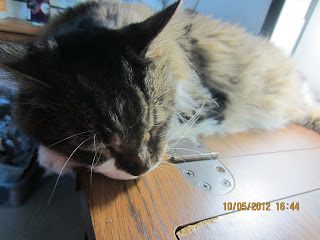 And then he moved over out of the way a little more, so I was able to get more done. 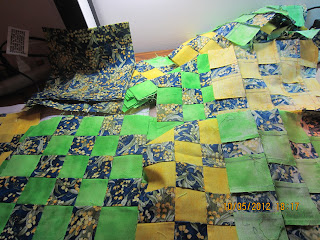 there are some 9-patch blocks to serve as cornerstones. Here's how the strip sets look as I'm getting ready to assemble them. The print doesn't show up very well on these pictures, but if you go to Flickr (just click on the picture) you can see it closer up. It's lilies of the valley--a reminder of the Hotel Muguet in Paris. 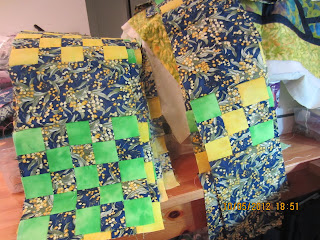 Sewed the first two rows together. Do you see the problem? Yeah, all the spacer strips need to be taken apart--the middle 9-patch needs to be turned 1/4 turn. Sure glad I noticed t his when I only had one of these put together--it's enough of a hassle to take one block out of the middle of a strip when it's attached on three sides. The other strips will be pretty quick. 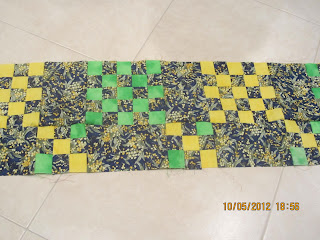 But this is sort of the problem with this quilt. That's why it was languishing for so long in a box in the garage. I had cut and sewn the strip sets for the 25-patches wrong, and at that time, the problem seemed insurmountable. Once I pulled the box out and checked the problems, it took only a couple of minutes to rip off  the "wrong" strip and a few minutes more to redo it so that it would work. (The pink carnation Art Nouveau quilt was its companion in the Box of Shame. Also turned out to be an easy, if slightly more tedious, fix. Ah, the joys of having some of my mind back!)

Tomorrow I plan to get out Jack (the ripper) and my little rotary cutter and get those 9-patches turned around. I've cut the border strips, so here's hoping I'll have something a little more finished-looking to show you tomorrow.  And now, it's time to go to the TV/knitting chair and work on finishing up the blocks for the Ships Project afghan. Of course, my fuzzy friend will be there to supervise--he approves of my pattern choices, at least!

Posted by mehitabel at 10:54 PM No comments: 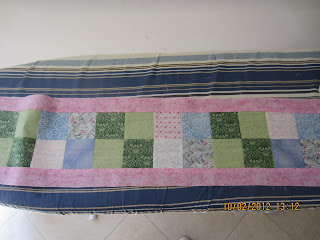 This is beginning to feel like an endless project... it's been a bit of a black hole of quilting! First, of course, this is part of the "box" of pieces that have been languishing in the garage because there was a fatal flaw somewhere.

Yeah. Funny how a couple of years distance, and feeling a lot better physically and with a clearer mind (now that the year+ of recovery from t he surgery is over) can make even an impossibly flawed project suddenly more doable. This one had a problem with the pink and blue 4-patches. No way I could get  them suitably random. Well, duh, no. Because they needed those green ones in between. I had the strips cut for the green ones, so that wasn't too difficult to accomplish.

The pattern (Dandelion Wine from Judy Hopkins' Triangle Free Quiltmaking) only calls for a separator strip on one side of the 4-patches, but I like the look better with 2. So 2 it is. I had a lot of that pink so I cut a few more strips and got them sewn on.  Pressing them in 100+ degree weather wasn't the most enticing idea, but hey, the ironing board sits right over the a/c vent for the room, so it was pretty doable. And I got a kick out of the light shining through the strip as it hung over the end of  the ironing board. 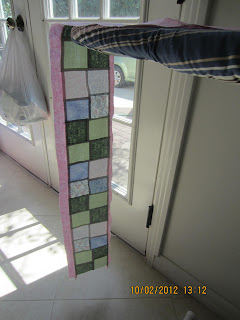 The blue strips of that wonderful Art-Nouveau looking print were already cut, so adding them to the strips of 4-patches went fast. 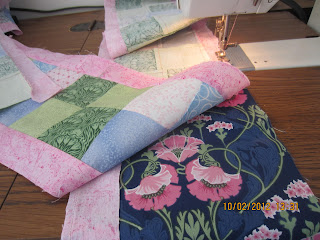 A teaser of how it will look. Needed a good press (again!) and then I trimmed the ends off evenly. 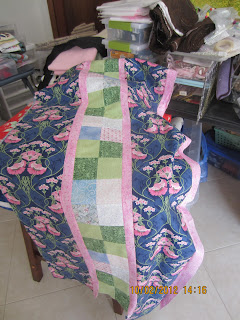 Whoa! These went together  quickly--just a question of matching the ends, centers, and halfway-to-the-center points. 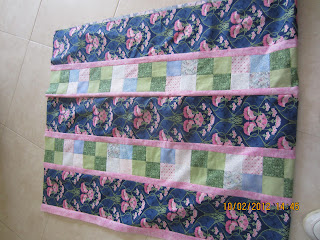 Naturally I had a helper for this part. He napped right through the easy parts, had to s how up when I was trying to juggle quilt-top halves and keep the stitching somewhat straight. 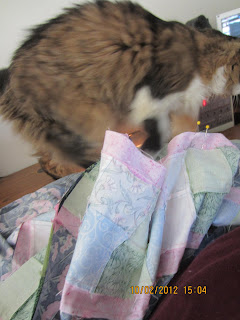 Yeah, he wasn't enamored of the idea of letting me just sew. Took a couple of strong hints and finally the bum's rush worked. Sorry, HiHi, but I was on a roll here! 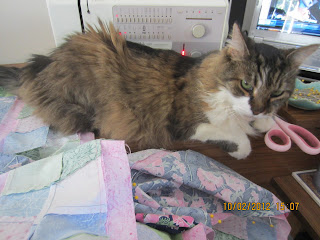 Sewed all the pieces together and then added pink strips to the top and bottom.  Now the major assembly is done, and that last little border stabilized all those seams on the ends. 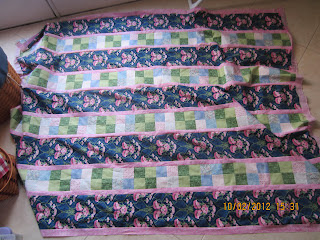 Needs another press to flatten out the top and bottom strips, and then it will be time to play with borders. I have a couple of ideas of what I'd like to do. Right now it's roughly (very roughly) 60" x 72" so I can play a bit. I have some more 4=patches that could be pieced into a border, plus there's a lot of that dark blue fabric left too. I want to do something creative but not too whack.  I think the next border might be the lighter green, and there's one of the fabrics in a light blue with a sort of carnation print that might work. Going to have to play with it though, and see what works. 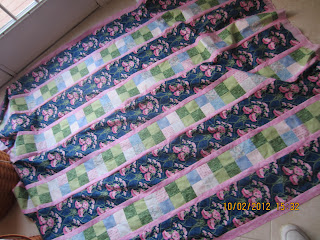 So this was a good project to keep me occupied today. Got a couple of things hanging fire and I feel as jumpy as... well, as me with too many things on my mind!!