Note: no pictures in this post. There is a reason for this. My trusty camera is sick! I had taken it out to the back yard for some photo shooting--you know, pics of roses and spiderwebs and such--and on my way back to the house, I got sorta kinda tangled up with an old push broom that LEAPED out at me and tripped me up! Camera went flying, and after I had picked myself up out of the tangle of old lawn chairs, I finally found it. Seemed to be all right, but then yesterday when I tried to take some yarn pr0n photos, I couldn't get the lens cover to open. I finally got it open, and then of course it wouldn't close. D4 finally got it closed, but it's going to need a trip to the Camera Hospital.

The up side of this is that I cannot take a picture of my bruise. Trust me, you don't want to see it, even if it is a deep rich royal purple. I would so love some yarn in this color...

So I'm trying a new tactic in my battle with Stash Enhancement. This consists of wallowing in what's already here, as opposed to going out to find more more more. Yeah, I told ET, this is like bolting the barn door after the horse is off and running, isn't it? But I have to say, it's amazing and awe-inspiring to see what's already here. I'm currently winding some of my treasures from Stitches West, with lots of help from Simon and kibitzing from Padua. (HiHi, on the other hand, is much more interested in his new feather-tailed mousie.)

So, tonight a little Train Wreck TV (the kind that's so bad you hate yourself for watching but can't tear yourself away) and lots of yarn winding. The a/c works in the living room, so it will be much cooler than outside!

And if I have to leave the camera at the CH, maybe I can persuade D4 to loan me hers for a few snaps. Just a couple of pictures...
Posted by mehitabel at 7:24 PM 10 comments:

There is seldom any kind of sky action out here--usually, especially with the kind of heat wave we're having, the sky is that clear hard bright blue that looks fake. Today, even though we've got severe weather warnings for the heat, we've also got clouds.
See? 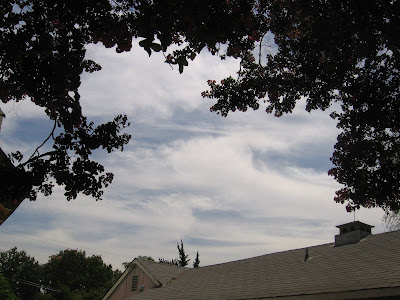 This view is looking south, over my neighbor's roof. From this angle, you can't see the holes that my poor late lamented oak tree punched in the roof. Holes that, 2 1/2 years later, are still covered with black trash bags held down with bricks and rocks. By the way, I'm not being snotty about the roof damage--I happen to know that their homeowners' insurance paid them plenty to repair it. 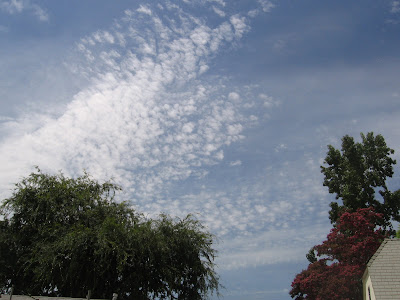 View looking west, with a corner of my roof and my crape myrtle and liquidambar trees.
Interesting cloud formation, isn't it?? 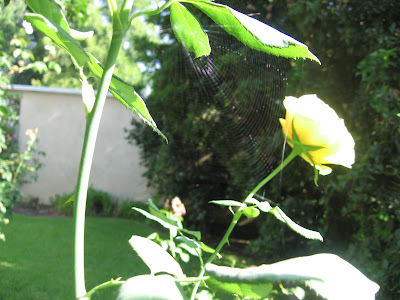 My green rose seems to have acquired a tenant--can you see the spiderweb? 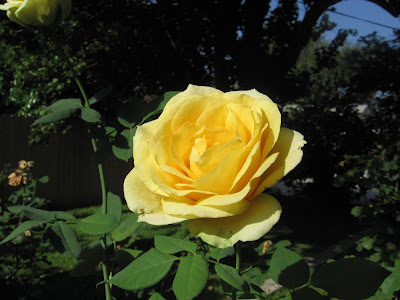 Yes, it's supposed to be a green rose. It turns yellow as it opens, but the petals get a touch of green as they age. 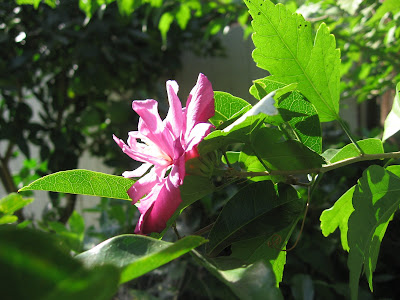 This is PURPLE for Project Spectrum. It's a Rose of Sharon that volunteered in my rose bed. Also known as Blue Hibiscus, it's a nice shade of magenta. 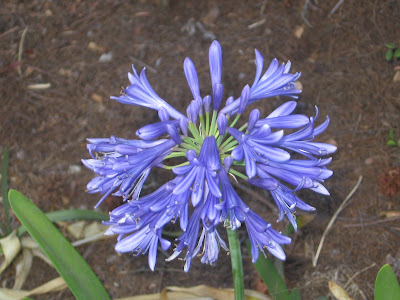 Agapanthus, aka Lily of the Nile. An extremely hardy plant with hummingbird-approved flowers. A very blue-purple!


Along with the morning glory, which is growing next to and amidst my combretum. I'll be out to take pictures of its blossoms as soon as they are ready, since they fit the orange part of this month's colorway. 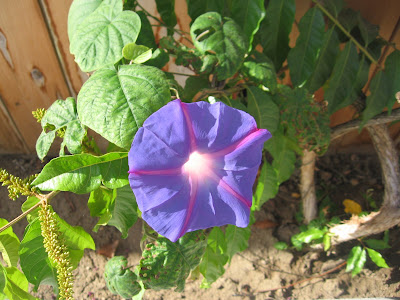 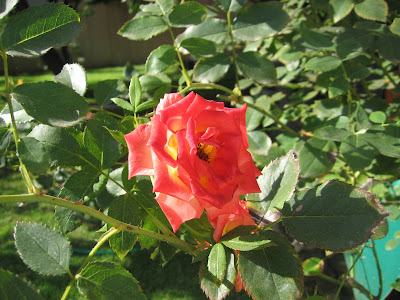 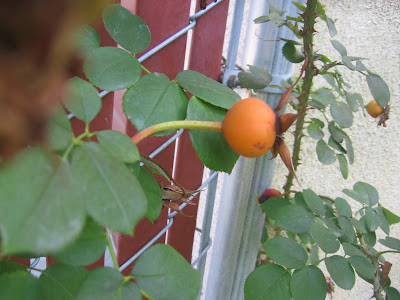 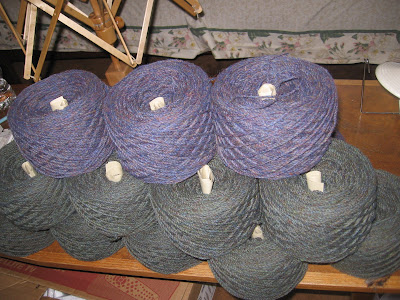 Hmmm... didja think there would be no yarn in this post? Think again! What does a person do while waiting (for the fifth time, folks!) for a freezer to be picked up?
One gets wound up, of course! Here's my "collection" of Black Water Abbey yarns. The green is Moss and the blue is Bluestack.
Now, here's an interesting bit of trivia. The green was fine, but the blue smelled really funky. Not only that, but when I had finished winding it, there was a fine layer of blue-grey grit all over the coffee table.

What's that all about??

Oh looky, looky! New yarn! Gee, I wonder where that came from? 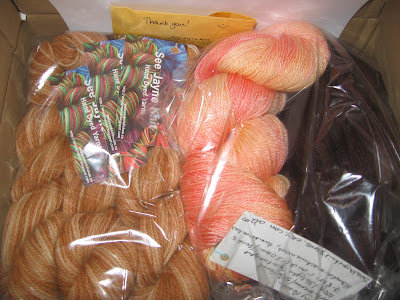 Well it says it's from See Jayne Knit. So I guess that's where it's from.
But how did it get here?

ET!! Phone home, and tell me what's going on here! 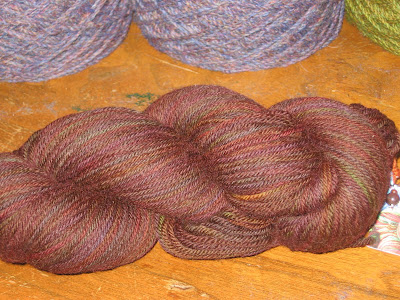 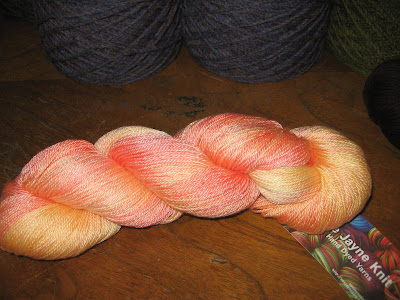 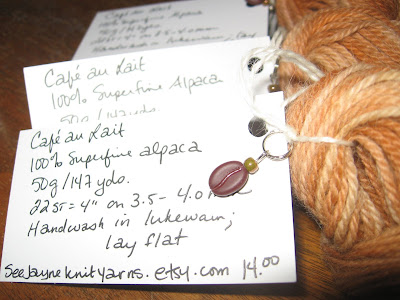 Check out the adorable coffee bean stitch markers that came on the Cafe au Lait!
Ah well, they're all PS colors, aren't they?? And that alpaca is sooo soft... I can hardly wait to get it knit up into a nice cozy shawl. Then I'll need some cool weather to wear it...


One last look at the sky. 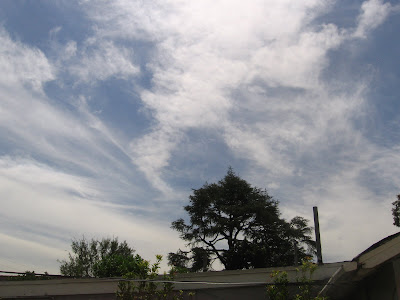 Looking due south again. Sure wish there was some rain in those clouds, and not just humidity to make the heat more uncomfortable!

Ah well, at least it's a pretty interesting sky! 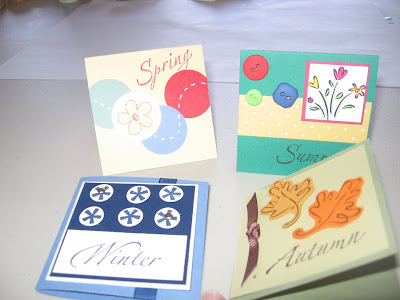 What does one do when it's Sunday and hot out? How about visiting one's local stamp pusher...err, demonstrator, yeah, that's it!--even when she's not super-local. Maria was having an Open House, with some super-fast and quick projects to make. So over the river and through the freeways we went (yes we do have rivers out here, even though they are all encased in cement troughs and are bone dry this time of year!) and a good time was had by all. Can I just mention that it was 104 out in Rancho Cucamonga?


So I came home to a cooler project. When the knitting mojo has wilted from the heat--and trust me, driving almost 100 miles round trip in that heat will wilt anyone's mojo--there are still yarny things to do with the fan blowing. 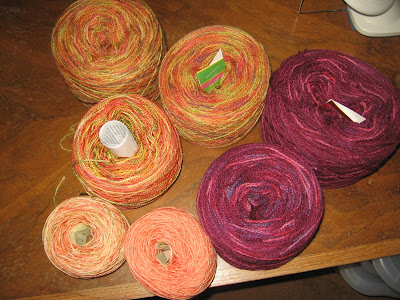 These are some "previously acquired" skeins: the two big ones are Fleece Artist BFL, one skein each of Blackberry and Autumn. The middle-sized on is Sea Wool in Autumn, and the two small ones are the skeins of Lori Lawson's handpaints from the trip to LPK on Saturday.

It can take a long time to wind this much yarn! The BFL is laceweight and has 1000 meters per skein. I think they will become shawls--I have some Fiber Trends patterns marinating in my stash that I think will work just beautifully!
And yes, MS3 is still in Time Out. I moved it around this morning but haven't made a final decision about it. We'll see how things go later today!
Meantime, there are two tubs of Black Water Abbey waiting for me to wind them. I was looking at pictures of Celtic Dreams and getting the urge to cable... Yeah, it's almost 100 here today and I'm thinking of heavy wool and cables. I think the heat has melted my brain. Either that, or the a/c is finally working!
Posted by mehitabel at 2:09 PM 7 comments: