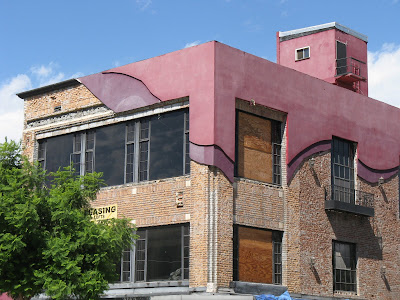 Decided to take a little break yesterday, since I got off work early, and went to Antique Row in downtown (or is it Old Town?) Pomona. Hadn't been for a long time, and I've been a little curious about how the antique business was doing during the economic downturn.

While walking over to the main "malls" I spotted this interesting building. It's one of the old brick buildings that line that street, and it's apparently in the process of renovation. I was amused and amazed by this treatment of the building--it looks like an overlay of smooth stucco has been applied to parts of the building, so that it looks as if it's emerging from a shell. A candy shell--like a Jordan almond--was what it made me think of.

Looking down the street there's another building getting the same treatment. 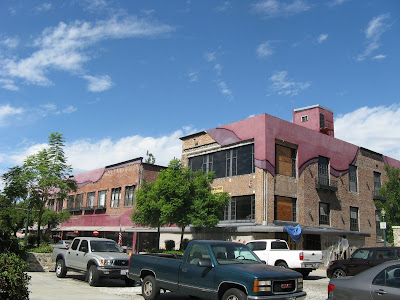 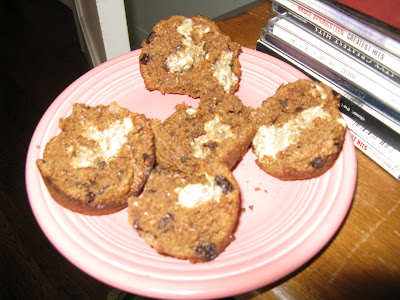 I'm so glad to see these wonderful old buildings being restored and recreated! Now I'll have to make a point of going back a few more times to check on progress, and see what's going to be going in there. 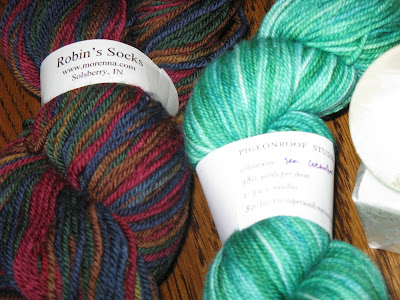 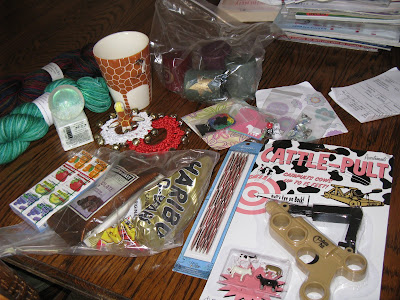 The whole street was pretty lively for noon on a Friday afternoon. There were a number of people in the different malls, and I overheard a couple of calls that were apparently buyers asking to reserve particular items. Most of the shops in the one building I really toured (it used to be Robbins Antique Mart, now it's just "Antique Mart" with a big blank on the sign where Robbins used to be) were having sales, which is par for the course especially this time of year. I know there were certain dealers who always had sales, back when Bob and I used to go for a Saturday or Sunday outing. They'd mark their prices way up and then discount them to the "normal" asking prices.

Hot buttered muffins for breakfast today. I've been looking at the raisins and wishing for something with raisins in. Earlier this week I made (and eventually ate) gingerbread with raisins in it--sooo good!

So muffins were the next thing. They did hit the spot, too.

Looking at my "new" Fiesta reminded me of the dealer in Pomona (or as my son-in-law says, "P-town") who had a whole double display case of original Fiestaware. I'm glad to see that the re-issuance (in lead- and cobalt-free glazes) doesn't seem to have hurt the market for the originals. He had some lovely stuff. There was a set of 8 ivory cream soup bowls that I could easily covet. At $40/each, however, covet is all I will do! I'll keep using my all-purpose bowls, thanks!

The new yarn is from a swappypack I received this week, from CyberFiber on Ravelry (who is also my Facebook friend Elizabeth). Although swaps tend to sometimes get mired in drama, the RR swaps have so far been pretty drama-free. I did this swap, as well as a Magic Yarn Ball swap, and I'm signed up for a Books and Yarn swap. The idea of that one is to pick a book (or two depending on whether they're paper or hardbound, new or used) and yarn to go with the theme.

I've got an interesting partner, and I'm looking forward to putting together a really amusing package for her.

The last picture is the contents of my swappypack spread out for maximum viewing. There are also more pictures on my Flickr page if you want to see the stitch markers or granny-square earrings or other goodies up close.

Yes, that is a "cattle-pult." Did I mention this was a "shop local" swap? That's why my yarn came from Indiana, which apparently has cows too. All I remember from driving through it is many many cornfields, rush hour traffic in Indianapolis, and the sign that said "Do not spit on the monument." Obviously there is much much more!

And now I must go find my super-glue and do a little surgery on the Shun Giraffe, who had an unfortunate accident on the way. Maybe he just lost his head from the yarn fumes...
Posted by mehitabel at 5:19 PM 3 comments: