Sometimes, things begin to snowball, and all you can do is hang on for the ride. That seems to be the theme with my UFO collection this month. I've suddenly been inspired to dig in and get them rounded up and on the road to FOs!

To back up just a bit, I've had a couple of tubs in the very back corner of my sewing area that got moved in there after I started settling down. One of them was full of batting, mostly leftovers from other projects and one big roll of something I'm not too crazy about. The other was mostly finished tops that just need quilting, and they--plus a couple of containers of pins and some batting--had been packed up to take to my ill-fated class on machine quilting at Asilomar. Really through no fault of the instructor's, it turned out to be not what I'd been told to expect, and secondly was thoroughly monopolized by a rather loud, rude, and clueless person who seemed to think it was all about her.  One good thing about it was that I was able to finally unpack my Brother 1500S and get acquainted with it.

Anyway, the tub came home, and what with one thing and another (like a couple of back surgeries), it stayed packed up. These were all quilts that for different reasons I wanted to quilt myself.

Well, the stars seemed to align in such a way that I needed to go through that tub and make some choices. Herewith some of the results of a very productive Monday! (And thanks, Anne, for the encouragement!)
The batik Magic Squares are from a class with Sylvia Einstein at Asilomar--2010, I think, same year as the quilting class. It's mostly batiks with a few standard wovens in there. It's small and offers a lot of good prints that will lend themselves to free motion quilting. It's also busy enough so that any mistakes won't show too badly.

Yes, my quilting is very rusty. Except for sewing on bindings and a couple of very small bits of walking-foot quilting, I could say I have barely touched the machine since that class.

The Mariner's Compass was made in a class with Judy Mathieson--the last class she taught at Asilomar before she retired. She teaches a method of paper piecing that uses freezer paper templates that aren't sewn into the fabric. It was the first time I was able to actually paper piece!


I love this quilt. Another small one and with lots of possibilities for the quilting. I think the batiks look very "watery" and the background fabric is a whimsical nautical print. (I also need to take out all the pins I put in, because the back decided to wrinkle and pucker. Wish I'd found that before I closed the pins. I always teach people to check the back before closing the pins...)

The cat quilt turned up in another box. I did manage to get all the appliques sewn down before I moved--buttonhole stitch with invisible thread. This one should be fun to quilt and even more fun to embellish. Buttons or beads for cats' eyes? Tulle or eyelet for the ballerina's skirt?

There are two more quilts waiting to be pinned, one from the box and the other is my Jumping Jax Flash quilt, which you've seen on the blog before.

Then there were five more tops in the box which, for various reasons, I decided I might just as well have longarmed. Boxed them up and sent them off! The top one on the stack is the Colorado Log Cabin, which wasn't a "tub quilt" but the rest of them are. I will say that part of the inspiration for doing this is that Anne was wearing her Stashbuster's tee, which reads "done is better than perfect." A mantra also espoused by Brenda Papadakis in our Dear Jane class.

Here's the rocker that sits next to my sewing area. In it are stacked a couple of quilts that need to be layered, two quillows which have since been stitched together and are now waiting to have the batting sewn to them (it's pinned in), and my Grand Illusion formerly-mystery quilt, which just needs the binding sewn down.

Who knows, one of these days I may make it to the bottom of the pile and be able to use the rocker to--gasp!--sit in!
Posted by mehitabel at 10:57 AM 2 comments:

Sometimes, you just have to wonder how and why certain projects got set aside at a specific point. At least, I do! This project is one of them.  I mean, look at this:

It's a complete top. In the box also was a 4-square block and a good chunk of the green fabric. Not so much of the red, and almost 3 yards of the light print. Hmm...

Here's the box...
So once I put my mind to it, it took only a couple of hours to get it to this point: 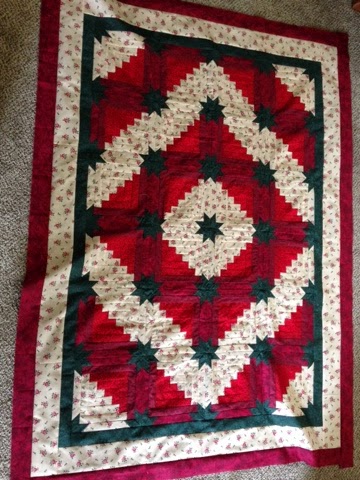 From here, I put a back together and got it bundled up with the request sheet for the longarmers.

After 20 or so years in the box, it's going to be a finished quilt soon. I figured 20 years at a minimum: the book in the box is Trudie Hughes'  More Template Free Quiltmaking and the printing date is 1988, but a couple of the fabrics are from Jinny Beyer's first collection of backgrounds and blenders, which came out in 1990. That was the year that the 100-piece collection was debuted at Quilt Market in Houston, which was the only time I went to Market with my boss from Bearly Stitchin'.  She really liked Trudie's books and methods, and we did a lot with them at the shop. I'm sure this may have been destined to be a shop sample originally, but then things changed direction. (She, my boss, was definitely one to assign the same project to a couple of people and then decide that she wasn't going to feature it after all. She had a real flair for shop decor and for projects that would catch people's imaginations, and I guess the feeling was that this was going to be a little too complicated for her two-day-class format.)

Anyway, I've had to update the sidebar--this quilt wasn't even on the radar until I brought that box into the house. Not sure what the takeaway is from this...except that I'm going to have a nice Christmassy quilt ! (Unless someone decides to claim it. That's always a possibility!) 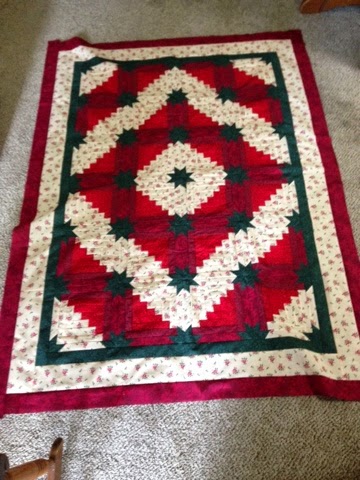