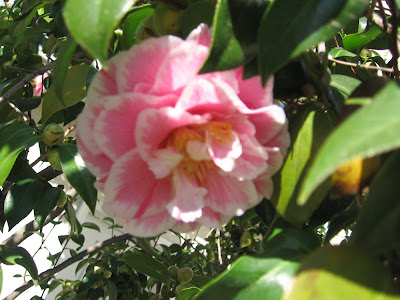 First, the usual camellia eye candy. This bush has an interesting history, sort of. It was growing next to the "old" back door of this house, along with another one. When we added on, it was obvious that the other one would have to be moved, but we thought this one could be left in place. Sure enough, the deck was built with a nice opening for its trunk. It's been thriving, and even outlasted the first version of the deck. Its sister, a deep red peony-flowered variety, was moved--Nurseryman: you can't move camellias in September! Husband: It's that or cut it down. Nurseryman: here's how to do it. Success!


Now, here we have something much less successful. Way, way, WAY less! This got frogged as soon as it had been photographed. And no, it's not my version of a thong--it's the start of a Candleflame shawl. So unsuitable in this yarn! 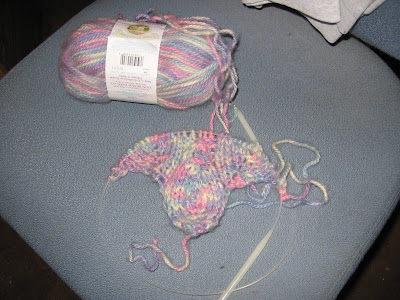 Version #2: much more successful. This is great waiting-room and "coffee" knitting! 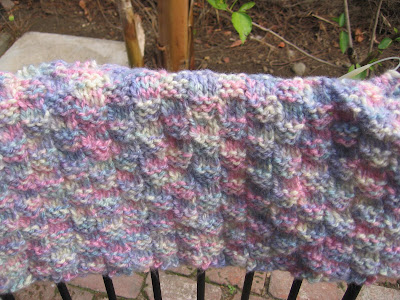 Finally, some snowdrops looking as if they'd much rather be in the snow than in the hard-baked clay that is my yard: 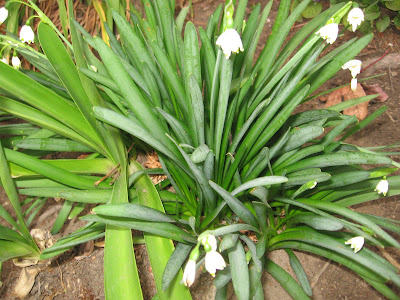 Knit Devil (fiendish person that she is) sent me a letter for her meme (read all about it on her blog) which basically asks you to list 10 things that are important to you that start with that letter. She assigned me C. (If you want your own letter, leave a comment on her blog, and she'll send you one of your very own.)
So here are mine, in no particular order.
1. My maiden name begins with a C. Which, of course, means that my dad and brother have the same last name. They are both known as Chick or Chicky.
2. Caitlin, aka D3. Obvious, no?
3. Courtney, aka D5. Ditto. When my husband called my mom to tell her that she had a new granddaughter and her name was Courtney, he said there was a long pause. Finally my mom said, Well, we'll love her anyway.
4. Cats. Love them furball critters!
5. Connecticut. My spiritual home, I think.
6. Cobalt blue glass--Royal Lace pattern especially.
7. Children's books. I have loved to read ever since I was a wee little thing. The family story is that I taught myself to read from the newspaper, which would have been a neat trick since it was an English-language paper and I didn't speak English till I went to school.
8. Craftsman-style houses. No, I don't live in one; my 1921 house is a pseudo-Tudor. I still love the style!
9. Chilly weather. I don't do well in the heat; I'm one of those people who, like my favorite flowers, needs a winter chill to thrive. If I don't get it I have a very cranky outlook.
10. Chocolate Candy. Nuff said??
Hmmm... there are a lot of things I love that didn't get on this list. Who could believe that not a single one of my grand-darlings has a name that starts with C??
Posted by mehitabel at 8:26 PM 5 comments:

Presenting... the UFO of the Month!

This month, I hereby resolve to work on... Birch! Hmm, she's not blue, grey, or white... but she sure is a weight on my conscience, so she's getting the nod. I love the pattern, I love the yarn, but as a knit, I'm having a doozy of a time working on her. I've had her on so many different needles it's a miracle she's still OTN!! She's going to come traveling with me, and I'll see if I can't get her done. 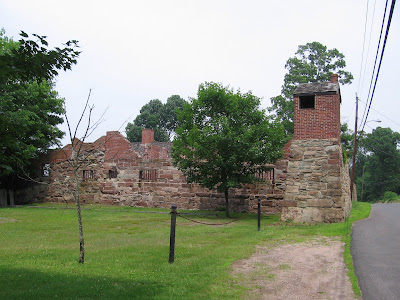 Anybody want to guess where this building is?
Short-ish post today, as I have a list of things to do as long as my arm--longer, actually. Part of the "fun" of leaving town for a couple of weeks is all the prep it takes, especially when the two weeks are going to be taken up with fibery pastimes. (Yes, the family will hold down the fort at home, and the fuzzballs will be well cared for. I, however, will be in fur deprivation mode. After all, I can talk to the people, but I can't pet cats from far away!) So I'm trying to get the sewing machines ready, the fabric and gear for quilting, and then the knitting to take to Stitches with me. Yes, I am going to lose my Stitches virginity this year.
I don't know how much blogging I'll be able to do from either of these venues. I do have a laptop now, and I'll be taking it with me, so there is every possibility of finding someplace to connect from. Stay tuned--but don't hold your breath!
Posted by mehitabel at 10:07 AM 3 comments: Is it wrong to dislike plants? I mean, to the point where, when something like this happens to them, you say, good job Jack Frost!

I mean, I like a lot of plants, and some I love. These, I detest. They are my neighbor's and grow on the other side of the fence, but their big ugly rubbery leaves hang over and drop all over, and they just make me unhappy. So when the frost came, and all of them (she has 5 of the things, in varying sizes) got frostbitten, I was not unhappy. Of course now there are dead brown leaves falling in my yard, and as you can sorta tell by looking at this one, the whole plant isn't dead. I imagine that by summer, they'll all be back to their repulsive glory. 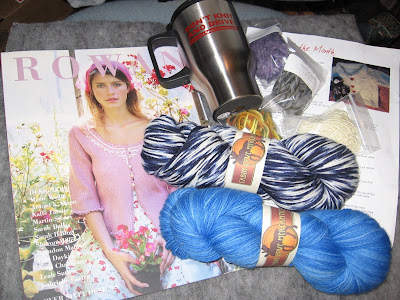 When you have a bad day at work, what makes you feel better? Coming home to a front porch bearing treasure, that's what! Here we have the new Rowan 41, which on a quick leaf-through looks to be full of yummies, beginning with the cover. Now, I don't always knit much from the Rowan books, but I love them for the inspiration they provide. Yeah, I'm still chugging on Birch, which is from # what, 30 or something? Hey, a girl needs all the eye candy she can get, some days! then there's my bundle from Yarn of the Month, and a Don't Knit and Drive mug (all the way from Seattle, thanks Marie!) because while I don't knit and drive, I DO drink (coffee) and drive. Lastly, my 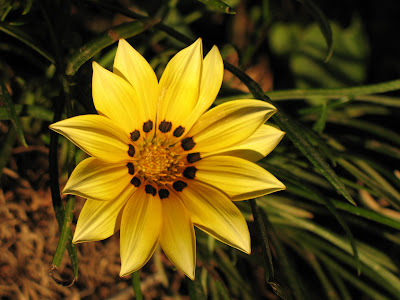 big treat--and I did it, I cannot tell a lie--some yummies from Dave Daniels at Cabin Cove Mercantile. Note the very Project Spectrum-like colors!

And here's a splash of sunshine (speaking of which, it's been in the high 80's here for the last few days, and I'm doing some serious watering to try to counteract it!) courtesy of a very tough little gazania. This plant used to live alongside my driveway, back when the driveway was blacktop. It survived the giant trucks and tractors that hauled away the tons of oak tree; it survived being moved before the new driveway went in, and it has survived the heat and dryness of this past year. And still has the courage to bloom this effusively.

I'm going to try to take a lesson.
Posted by mehitabel at 5:07 PM 5 comments:

On the bandwagon again...

What Kind of Knitter Are You?

You appear to be a Knitting Guru. You love knitting and do it all the time. While finishing a piece is the plan, you still love the process, and can't imagine a day going by without giving some time to your yarn. Packing for vacation involves leaving ample space for the stash and supplies. It can be hard to tell where the yarn ends and you begin.http://marniemaclean.com
Take this quiz!

A little grey/blue/white in this snap I took last night on my way into work: 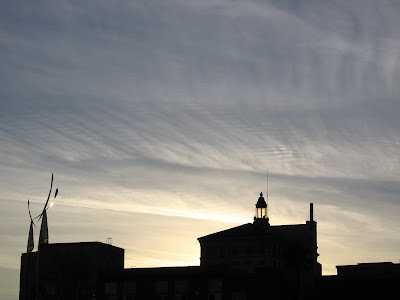 There are some very interesting buildings going up around town--I like the way the light worked on these. Definitely not a generic skyline!
The camellias are from my yard. I don't know their names, but the house was built by a nurseryman and there are a lot of "experimental" varieties around here. Seeing how slowly camellias grow, I have no problem believing that these have been here since the early days--house was built in 1920. 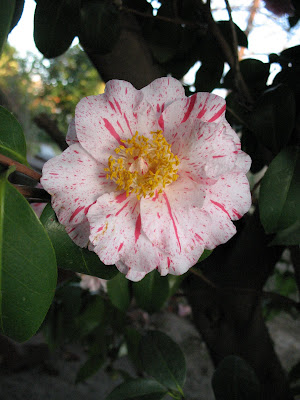 And it shows. Everywhere. Especially the kitchen. Don't let me get started on that; let's just stop and smell the flowers. 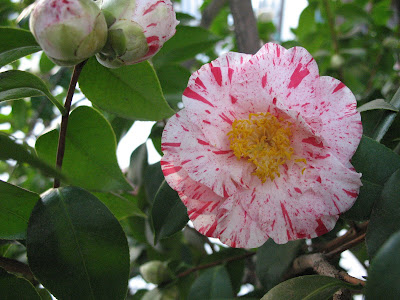 Oh, that's right. Camellias have no fragrance. That's why they are such great corsage flowers. Yeah, my very first corsage ever--college freshman, fixed up with someone's buddy Rudy. Pink camellia. Gorgeous thing, loved the flower, wasn't too keen on the guy. He never called me back after the Sunday afternoon when he called and my cousin Richard gave him a real hard time. Who needs a big brother, right? 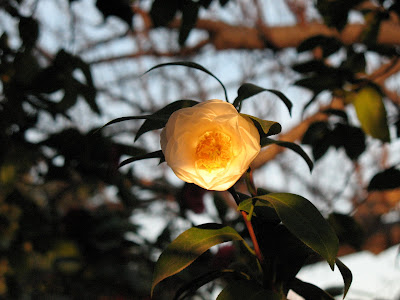 This last one is actually a white blossom, with the sun shining through it. The quest for a yellow camellia is ongoing, but so far it's not happening.
My town is "famous" for its annual Camellia Festival, but the only thing camellia-related is that the floats for the parade have to be covered in camellias. Nothing else. So you're basically working with a palette of pink, red, white, green leaves, brown (you have to cook the leaves, or pick nice fallen ones), and yellow from stamens. It is amazing what the kids can do--yeah, these are done by kids, some grown-up help allowed but all the flowers etc have to be pasted on by kid hands.
It was great training for my kids--when they worked on floats for the Rose Parade, they already knew how to keep the glue off their clothes!
More info on the Festival here if you are interested!
Posted by mehitabel at 1:35 PM 3 comments: