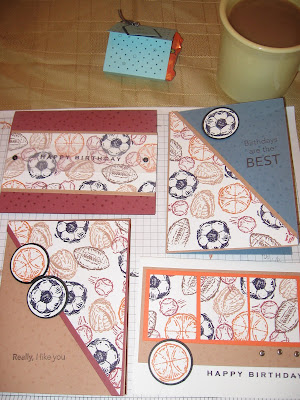 First, a little Paper Art from today's stamping session.
This is half of a "one sheet wonder" project, which consists of s-t-r-e-t-c-h-i-n-g your papers to go further. We stamped the sports balls onto this particular one, but I could see this working nicely with one of those heavy expensive handmade papers, or a really pretty calendar page... All of this was done with a 1/2 sheet of 8.5 x 11" paper. 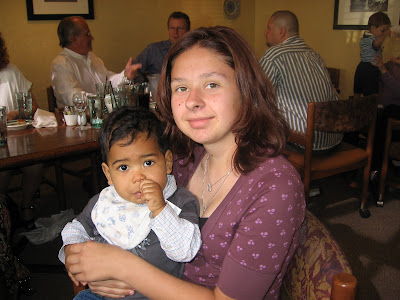 These pics are for the "what's on your fridge" theme that's been making the rounds. In my case, obviously, there's wayyyy too much stuff on my fridge!

I guess that's why I needed a big one, huh? 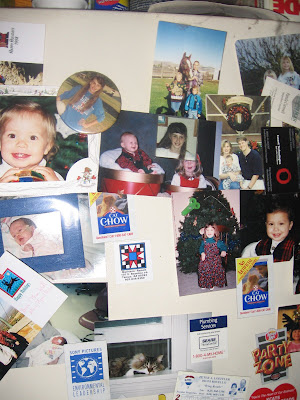 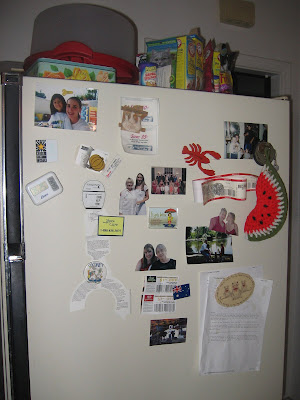 So for next time, I will try to have at least one FO picture ready. The Salem shawl is nearing the end of its "creation time" or should I say, I'm getting heartily sick and tired of hefting its weight around! It's about 5.5 feet long and, I am thinking, that's going to be plenty long enough. I think it is going to be nice and cozy, though, and the pastel colors are perfect for spring.
Posted by mehitabel at 7:44 PM 2 comments: 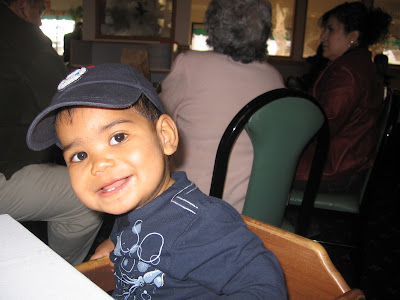 What's a week without Grandcarrot pictures? Here's the boy, eating his dinner in a local Chinese restaurant, and having a lovely old time of it.


Chopsticks are good. Especially when you get rice and egg and green peas on them! 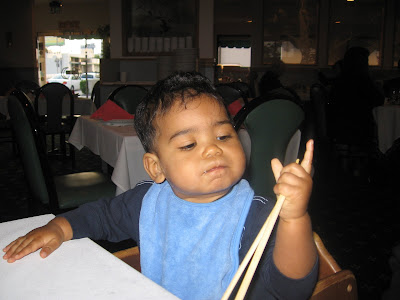 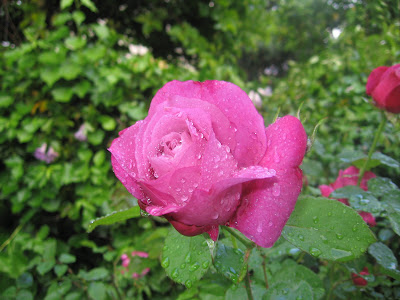 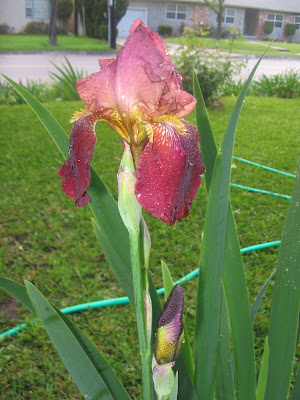 Rained here today, so for your enjoyment here's some rather wet flora. First, a purple rose--Heirloom, I think. Deep purple color, very rich fragrance. Lives next door to my Double Delight and between the two of them, the back yard smells strongly of roses!

Here's a giant bearded iris. I don't know the name of the variety--it's a rescued rescue, which has lived alongside my driveway till we had to move it to make way for the new driveway.
The color on this one is a deep burgundy--quite striking against the wet green grass. 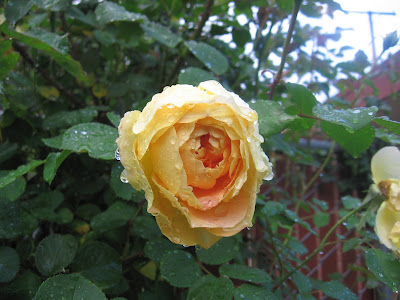 just for Project Spectrum, a nice yellow rose. This is one of my David Austins, her name is (I think!) Tess or d'Urberville. She's one of the series with Thomas Hardy names.
Gotta love that "wet look." So glad we finally got a little rain!

This brilliant orange bush grows alongside the back wall of the garage. The bush is all the way up to the eaves. The flowers just glow even on a darkish day like today. 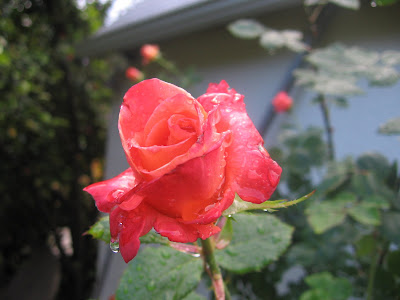 And no, I can't remember her name either. Sigh. 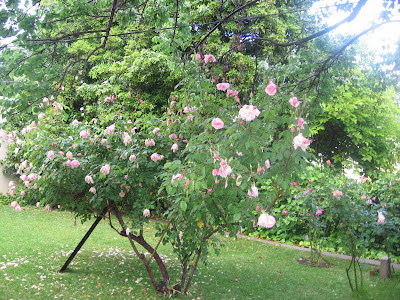 Never did know the name of this bush--it's a very very old one, was here and already elderly when we moved into this house 36 years ago. The blooms are too fragile to make good cut flowers--they are rather similar to my Queen Elizabeth (she's not blooming yet) but QE's hold up better. This one is definitely the queen of the yard, though! 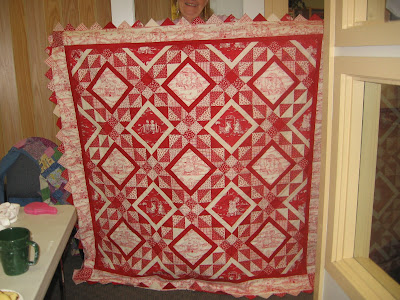 Some quilty goodness--here is Louise's redwork quilt. The centers of the large blocks are a Mary Engelbreit red/white (or white/red) print and the setting triangles, which form stars in the alternate spaces, are different coordinating fabrics. It's finished off with dozens of prairie points. Altogether charming--all it needs now is a good stretching and quilting, and it will be off to its new home. (I think it's going to one of her nieces but don't quote me!) 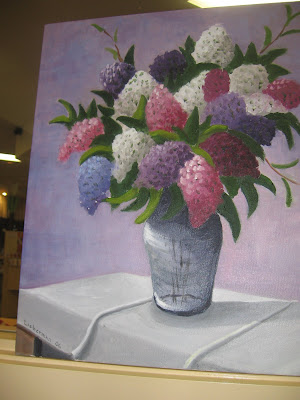 One of my Tuesday quilters is also an artist, and this was my gift from him just because he knows I love lilacs. (If you go back a few posts there are pics of him and his grandson, working on a quilt. Grandson has since made a second quilt!) 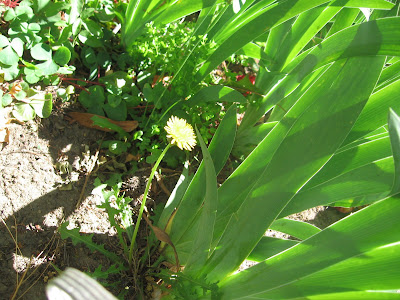 Lastly, here's a photo I wasn't able to delete from the post. It's a dandelion, growing in amongst the irises. I remember that the blossom was glowing in the sun (obviously not taken today) and it looked pretty chipper there in the dry brown dirt. What happened was, I uploaded some pictures the other night, but Blogger would only show me red x's instead of the photos. So today, the pictures were there, and I no longer thought the dandelion was quite as charming, but Blogger says, there she stays.
So there.
Yes, there has been knitting going on. I'll have pictures soon as there WILL be an FO shortly!
Posted by mehitabel at 11:27 PM 8 comments: