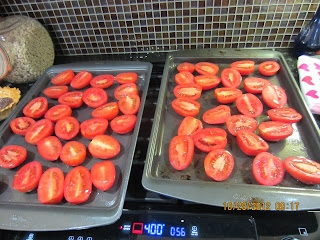 My morning started out fairly early, with a couple of trays of Roma tomatoes going into the oven. Today was Soup Day, a sort of almost-annual tradition where the Daughters and I get together and spend the day cooking. 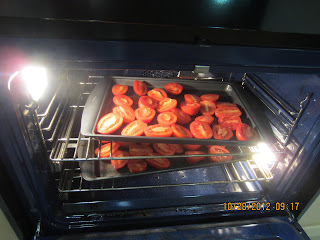 Tomatoes roasted while I showered, dressed, and ingested some coffee... 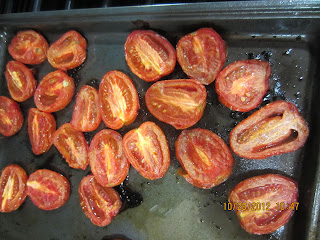 and then mixed up a batch of cranberry-orange muffins. After all, t hey bake at the same temperature the oven had already reached for the  tomatoes--and by the way, don't those tomatoes look yummy? 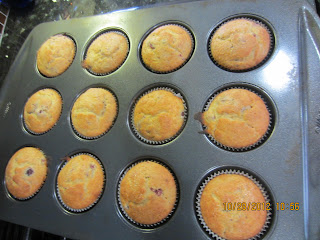 Tomatoes, muffins, and I made it over to Youngest Daughter's, where we were shortly joined by Middle Daughter and the boys. The cousins had a great time playing--they really enjoy spending time with each other. Here's G playing with trains, while A1 tries out the double-umbrella maneuver. 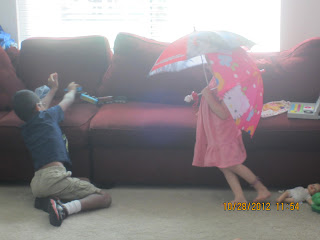 The stove was pretty busy! That's cauliflower in the back, cooking for a cheddar/cauliflower soup; meat for the Taco Soup; those tomatoes have made it into the soup pot. 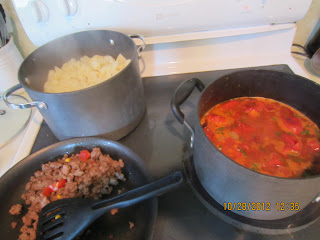 Aren't they looking tasty? The basil was freshly picked from the herb garden about 2 minutes before it went into the soup pot... 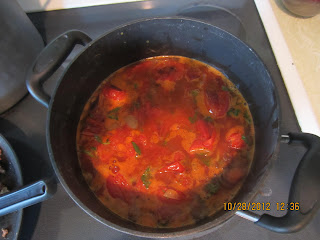 Split pea soup simmering in the big crock pot--it spent all day in there till the peas disintegrated! 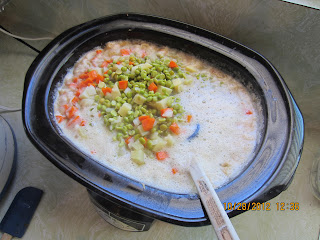 The other crockpot held the taco-beef soup. 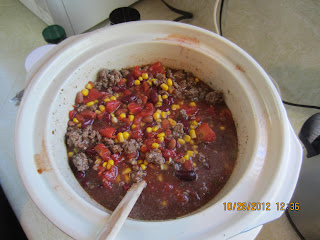 Courtney, the organizer of this cookstravaganza, making sure the crocks are doing their thing. 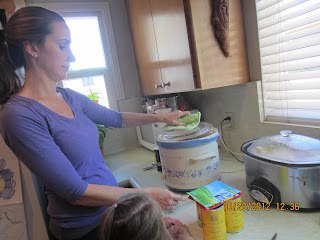 The cauliflower/cheddar soup, pureed and ready to put into containers. That's a second batch of taco-beef soup on the stove. 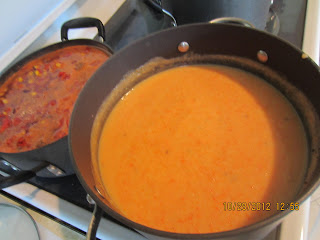 First soup ready to go... labeled for distribution. Caitlin thought it was very funny to call it "cali" soup since we're in, you guessed it, California. 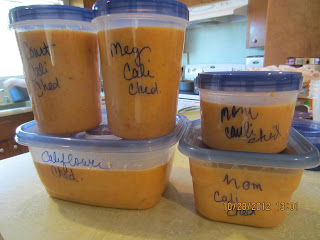 Tomato soup, taco soup, and California cauliflower soups, ready to go. And then the chicken-tortilla soup and the beef vegetable soups were done and ready to go out. Luckily, Courtney has an extra fridge in the garage, so this could all get a quick chill while we kept  cooking. 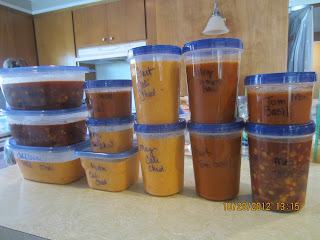 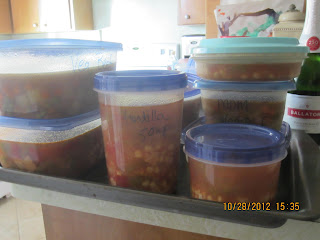 Here's Caitlin, stirring the Roux That Wouldn't, for the clam chowder. The pot in the back has the potatoes, onions, celery and garlic simmering in clam broth; she's stirring up a roux with cream and half-and-half, which eventually did  thicken up so it could be mixed in with the potatoes. So good! 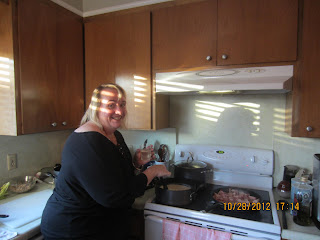 Getting things ready for the last soup of the day, a loaded baked potato soup. This one was the hit of the Halloween party last year, so it was a natural to make. 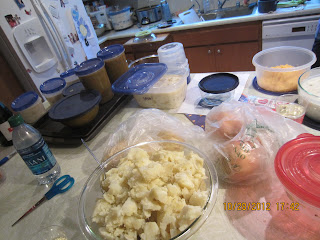 Here's Meighan stirring another Roux With Attitude--somehow, when it's got 12 cups of milk in it, it seems to take a while to thicken. 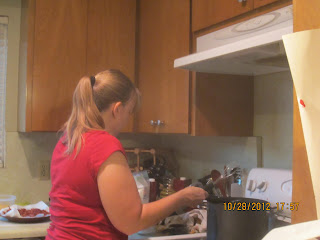 At the end of the day, we divvied up the containers--I think we used every available container, including a whole box of freezer baggies. I have soup in my freezer and fridge, as do all three daughters.

The irony of spending the day  making lots of hearty and delicious tummy- and soul-warming soups is that it was really really hot today. Figures! The kids didn't seem to mind playing inside, though, and they got lots of samples of what was cooking. Nate's big question: is it spicy?
Posted by mehitabel at 10:04 PM No comments: