In Celebration of Standard Time! 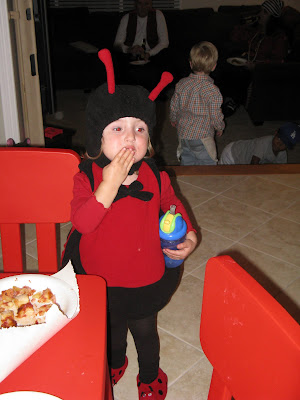 Presenting a couple of cute critters that were encountered last night:

a ladybug clutching her sippy cup and eating pizza;

and a rather unhappy dinosaur. He doesn't like things on his head, and his expression clearly states: You can make me look adorable, but I don't have to like it! 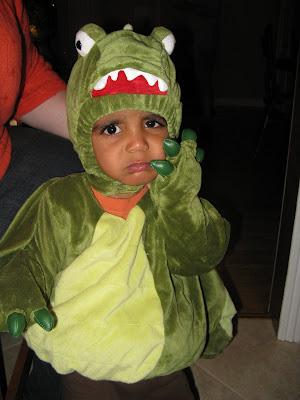 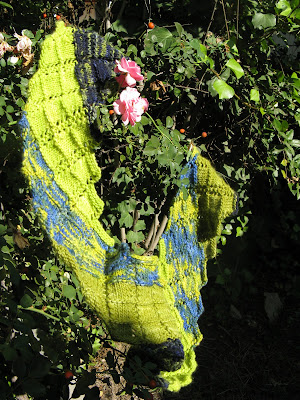 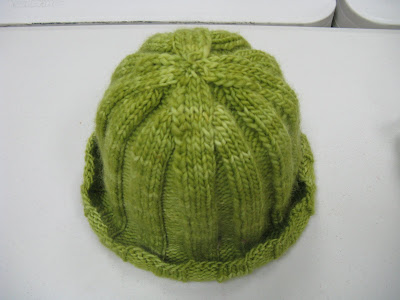 Would you believe I have actually been knitting, and even finished a couple of things? 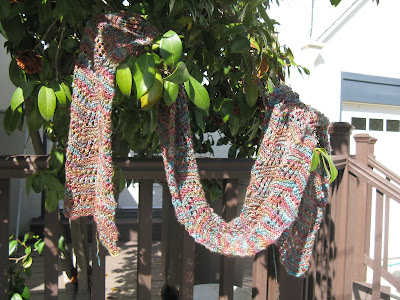 Of course it doesn't take a full skein of each to make the scarf, so I've been making hats out of the remainders.

See that? There's the Lettuce one, all done. As I write this, the Apple Green is a little over halfway to the top decreases.

Not sure if I'll keep using the same pattern--it's quick and easy. It's the Boy Hat which I found on Ravelry. Easy enough that I was able to copy the directions onto 2 post-its. Because, of course, my printer is still among the missing.

One of those projects for a cool weekend. Apparently, the Universe does not want me grubbing in the garage, since we've had nothing but hot and miserable weekends.

Anyway, this little hat is not really meant to have a turned-up brim; I posed it on top of a little basket at the quilt shop, and had to roll it to make it stand up.

However, since I'm a bit of a pinhead, I have to roll it on my head, too.

Have I mentioned that Mmmmmalabrigo is soft and squishy and feels nice and warm?? It's also loosely spun, so there's a thick-and-thin quality that makes it look very rustic.

And lastly, here's an FO that I for one never quite believed in--yes, the Paris Scarf is finished!

Well, except for running a couple of tails in, and giving it a good wash and block. After all, it's been all over: on airplanes, trains, buses and cars; in France, and New England, and up at Asilomar; not to mention innumerable coffee shops and other knitting venues!

It's also been on more needles than is reasonable for anything that's this (relatively) simple: the original set, Bryspuns, fell apart on the TGV between Nice and Avignon, and were replaced by some that a French shopkeeper found in the depths of her stockroom. Those were kind of skanky aluminum, but needs must when the devil drives sort of thing, you know? Once I got back to the Land of Multiple Needles, I tried it on Options--too slick; bamboo--too sticky; an old Balene--perfect needles, horrible elderly cable that wouldn't play well with me. Sigh. Then I bought a set of Zephyrs, and oh my, they are perfect for Sea Silk! I've also moved Birch onto them and they are perfect with Kid Silk Haze, too. (Not so good with Mmmmalabrigo; the Options are working much better!)

Now, if you will excuse me, I have a hat, and some baby sweaters, and a few other projects to go work on.

And can I just say how very happy I am to be back on Standard Time? It was so nice to wake up this morning to sunshine and the knowledge that the day wasn't already half gone! Tomorrow will be the test: on a workday, having a little extra sleep time is a real blessing!

Where do I sign the petition to abolish hateful nasty Daylight Saving Time??
Posted by mehitabel at 10:10 AM 4 comments: