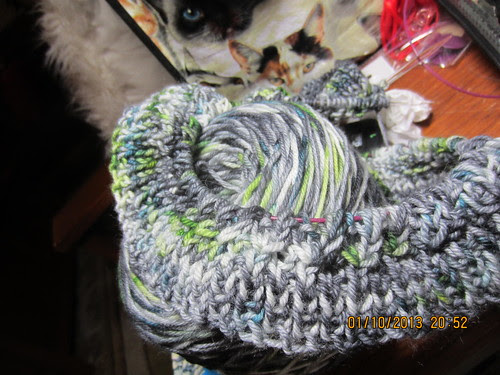 Denver Cowl, a photo by marie watterlond on Flickr.

Because I didn't list enough UFOs on the sidebar over there, I just HAD to cast on something new! Well, I had t he yarn, and while the enthusiasm for the pattern was strong, I figured, why not? A girl needs lots of "group knitting" projects, n'est-ce-pas?

Posted by mehitabel at 8:48 PM No comments: 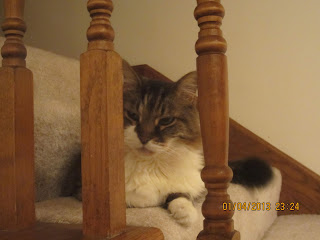 His Royal Catness is supervising operations from the stairs. He hates being given t he bum's rush when I'm quilting and usually after being moved three or four times (hey, it's hard enough to maneuver a big quilt around, without adding 12 or so lbs. of cat to it!) he'll retreat to the steps and watch me from there.

You see, it's close enough so that I can reach through the bars and give him a couple of ear-skritches for being such a good kitty. 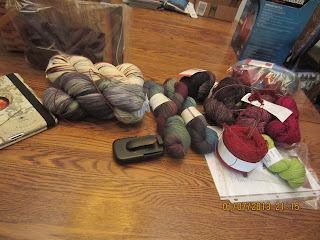 I can't get caught up on my knitting without winding some yarn. That's my story and I'm sticking to it.

there just might be a couple of new projects in there, though... those two skeins of Miss Babs Yowza could become Denver Cowls.

Well, a girl needs a "group project" or two, doesn't she? At least this one does. Something that, once established, is easy to work on while chatting or waiting around for whatever. 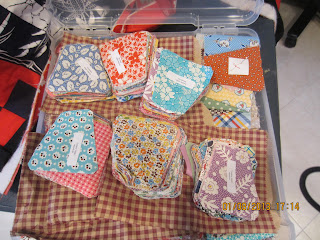 This will get the Tumbler quilt closer to completion, too. The last packet of precut tumblers has arrived, and joined its siblings in the project box. This is a lot of fun to piece--all the pieces being cut for me really made it easy!

Besides, there is something so satisfying about sitting and sewing row after row of strips and then putting them together.

We'll see how soon I get to it. In the meantime, you can see that t he yukata cloth quilt is on the machine... 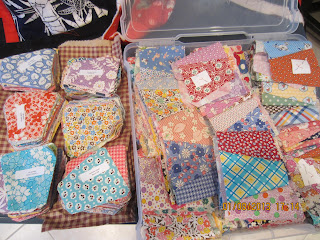 Posted by mehitabel at 4:48 PM No comments: