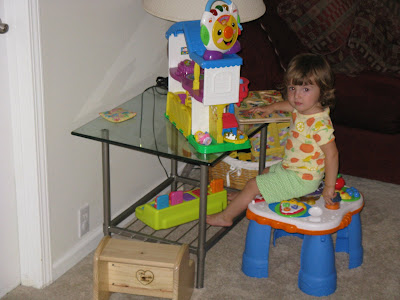 First off, let me point you to a new link on the sidebar there: John and Ryan are heading West, and will be blogging about it. You've seen John on this blog before, he's also known as #1 grandson.

I will be looking forward to reading about their travels. It reminds me of my own journey West, back just a few years ago. Picture in your mind's eye for a moment: me, age 20, with a fresh new college degree (ink not quite dry on it!) and a contract to teach in Los Angeles for a year; friend with same. We set off in a '53 Chevy with $300 between the two of us, and actually made it all the way on that. (Did I mention that in 1962 gas cost, oh about 25 cents a gallon? That a night in a pretty decent motel was less than $10, and the fleabags ran $5?)

The rest is history. Although my contract was only for a year, I met someone who convinced me to sign another kind of contract--that one lasted 42 years!

And led, sort of indirectly, to John and his cousins... 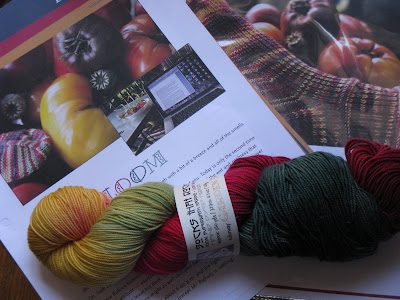 If you're tuning in for the yarn pr0n, here's a bit of new stuff for you. 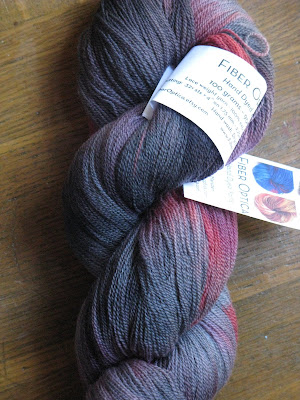 This is the newest from the STR club. Inspired by heirloom tomatoes and all their glorious colors, Garden Daze has reds, oranges, greens and a nice sort of tealy green. I was (shhh!) a little underwhelmed with the sock pattern, but then I don't knit socks, so it's kind of a moot point.

IF I were to want to knit some socks--and, it's always possible, if someone I love enough wants a pair badly enough--and I wanted to use this pattern, I'd probably do it in a semisolid instead.

Who, me? A rebel? Whatever gave you that idea?


I'm a little disappointed in how this picture came out, because the yarn itself is so much deeper and richer in color. There's also a lot more red than you'd think from looking at t his view of the hank.

It's from Fiber Optica, laceweight, hand dyed in the Rekjavik colorway. It's one of those things--I was on Ravelry, just quietly reading away, and there it was at the bottom of the page. I had to click through to the Etsy shop, and well, that was that.

I'm busily chugging away on my granny squares for our Summer of Crochet Love GCA and have rediscovered the seductive power of crochet. Couple of things are helping this new addiction (or should I say, revival of an addiction) along: I have a hook that doesn't make my hand cramp up, and I'm using Noro Silk Garden, which has so many variations that it's just tantalizing to see what will come out next.

I mean, I'll be going along, crocheting from a ball that is showing bright turquoise, magenta, and deep green--and what's under my hook is grey, brown, dull olive. Some of it is underspun and very thick; some of it is overspun, and almost the size of fingering weight; there's VM (vegetable matter, for you Muggles, meaning bits of straw, grass, etc that didn't get cleaned off in the processing), there's bits of thread--it's an adventure in a ball of yarn! No one knits or crochets with Noro expecting perfection; the rusticity is a major element of its charm. My count as of t his afternoon is 57 squares; I'm on the 14th ball of the stuff. My goal is either 99 or 108 squares, which will make a pretty good-sized afghan (or two lap blankets). We'll see if I can finish this before the lurve wears off! Pictures next time, or hit my Flickr page to see the beginnings of this.

(Explanation: I'm writing this post on Firefox, which doesn't cooperate very well with Blogger, so I can't add pictures part way through a post and then move them to where I'd like them. So I think that tonight my squares will have their own photo shoot, and they can be another post.)
Posted by mehitabel at 4:25 PM 4 comments: