A Surprise, and some sprouts 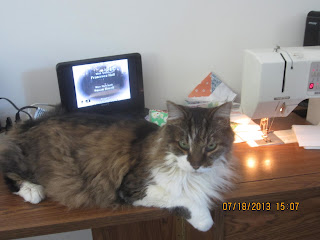 Busy few days around here lately, although as is usual with busy-ness, there isn't a whole lot to show for all the moving around.

But the house is clean, and I took the poor filthy car to the car wash, and lo and behold, it's green again! It was sort of mud-brown and it was hard to tell if the windshield was dirtier inside or out. Now I've got laundry going, so soon there will be clean clothes as well.

Spent well over two hours at the doctor's this morning, and all I can say is, it's a good thing I had my knitting with me. Whoever has the bright idea of putting TV sets in doctors' waiting rooms should be taken and forced to listen to the noise for two hours or more. It was a relief to get back into a quiet exam room!

This was just a regular checkup with my PCP, no big deal. But I was so tired when I got home that I had to take a nap. I hate taking naps. I always have a hard time waking up in the morning, and it's the same thing after a nap. Except that it's usually too late to start mainlining coffee  if I hope to sleep at night. 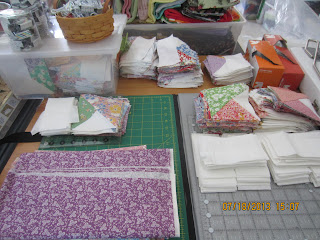 Anyway, it was nice to have the rest of the day to just sort laundry and start the machines, and get back to my precious pinwheels.

Just look at those tempting stacks!

The supervisor was on duty, as usual. He expressed his dislike of Mr. Campion, although I quite enjoyed this series. I wish I had more of them!  Next up will be Peter Wimsey.  I do not think he will be any more fascinating to the cat. 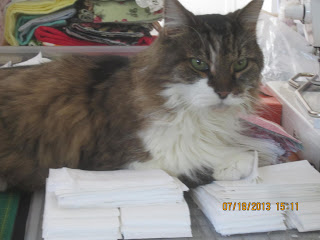 He's holding down the squres and rectangles so they don't escape.

By the time I quit for the night (I have to get up early tomorrow for PT, sigh, and this guy wakes me up every morning to let me know the sun came up) I had 450 of these done. If all goes well, I should finish them up soon and be ready to start sewing on yellow squares.

I also need to finish cutting sashing strips, but I have a lot of those done from Monday. 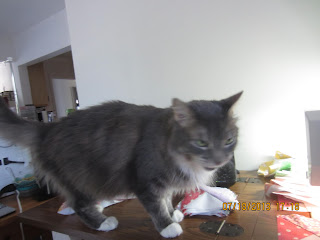 And here's my surprise: another feline visitor to the sewing machine!

She's not a frequent visitor to the blog, because she's been such a shy little thing. This is major progress for her!

She's "come out of the closet" at last and spends a good part of her time hanging around me. She likes a few pats and will purr if I stroke her or talk to her.

But this is active exposure for my "closet cat." I think she likes being a pet! 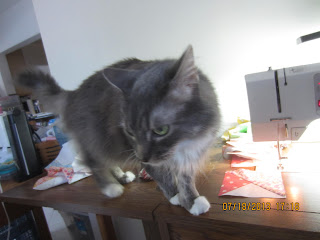 She did a lot of checking it out, and she has a long way to go before she'll be a really good "sewing supervisor" but it's a start. 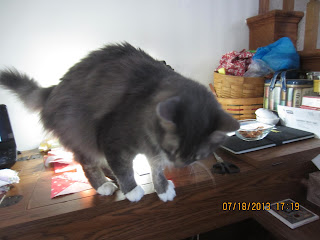 She seems to be wondering how she got here and how she can escape, doesn't she?

Oh, Shyla, we'll make a sewing cat out of you yet!

The last picture here is my pathetic excuse for a pot garden this year. Well, okay, it's more than I've had some years! Most of the bulbs I planted didn't even sprout, so that was a bust. However, I have a nice little volunteer Tradescantia which I'm hoping is the blue-flowered variety, and I planted some seeds my brother sent me. 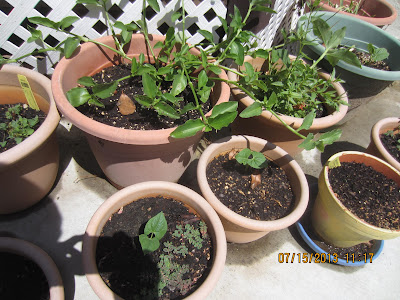 And they've sprouted! They're a variety of pole bean called McCaslan so of course both my bro and I have to grow some! (McCasland is a family name. Supposed to be Scottish, but my brother's research seems to show that it's in fact Irish. Or Scots-Irish.)

So we'll see how well the beans do in the pots, and if they'll bear fruit at all.

And yes, I have since pulled that spurge out of the front pot. Nasty stuff!
Posted by mehitabel at 10:21 PM 2 comments: 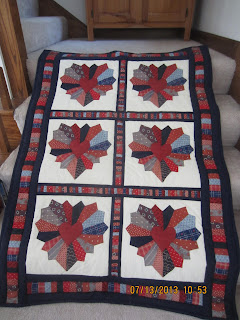 Back a week or so ago, when I was digging around for my Dear Jane supplies, I found a baggie with 6 partially completed Dresden Hearts blocks. Then when I was assembling things to take to my Friday night once-a-month quilting night, I thought of them.

So I did the sewing on them and then took them to trim and turn during the session. They're done with "faced" applique, an old technique that has been revived sporadically over the years. One person teaches it using iron-on interfacing instead of fabric.

That works about as well as you'd think it would. Which, depending on what you expect in a finished product, varies from "just passably okay" to "outright horrible."

Well, I never said I didn't have an opinion! 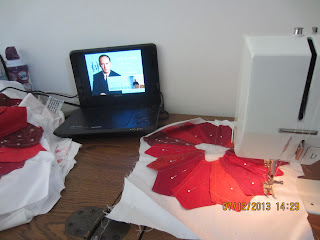 These are backed with a lightweight solid white fabric, tightly woven enough to hold together when trimmed really closely (a little less than 1/8") to make a sharp turn line. Then they'll be appliqued by machine to the proper backing fabric.

The red/white/blue one is the original class sample I made many many years ago--the copyright date on the pattern is 1989 so my guess is probably 1990. Some of the fabrics have faded horribly, as many of the fabrics from that era did. Combination of non-lightfast dyes and setting methods that didn't work all that well. 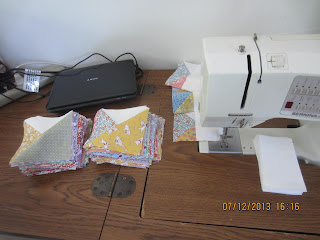 I did get them all sewn down and turned,  ready for a good press one of these days when I feel up to it! Maybe I'll have to work on it for a Christmas quilt. That would be fun.

My little DVD player has been quite helpful in keeping me happy at the sewing machine--though I must say, I'm really enjoying this part of the pinwheel project! Chain piecing, especially when all the pieces are cut so they fit nicely together, is very pleasant. Reminds me of my mom sewing dozens of doll clothes! 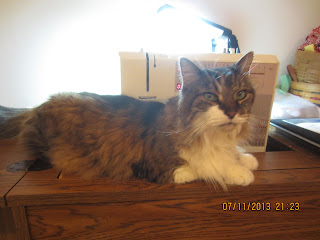 I've been running through some of my DVDs at last. It's so much nicer to be able to sit there and change the DVD when one is done instead of having to get up and do it on the TV box. My TV will stream videos but it's not in the same room as the sewing machine, and my laptop just doesn't have the capacity for it.  When I'm doing something (like the hearts) that needs closer attention, I put in a music DVD and then I can listen but don't need to watch.

The supervisor, of course, doesn't approve. 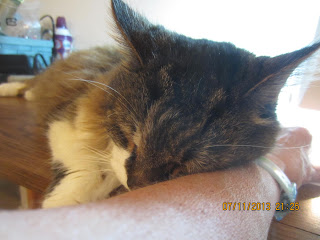 Poor baby. He feels very neglected and has to let me know exactly what I can do about it.

Though I must say it's quite endearing when he lays his head on my arm and purrs madly at me. (Right now, he's alternating meowing at me to go upstairs and feed him RIGHT NAOW!! and exchanging cat-curses with Shyla.)

So this last picture is kind of what it looks like in the middle of all this chain piecing. I had counted the white rectangles out into groups of 50, so I'm doing each set, then cutting them apart and stacking them. 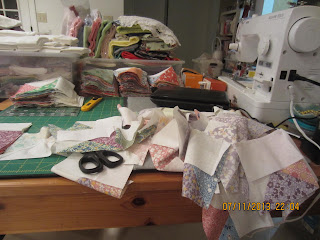 Latest count is something like 850 done. Very good progress... considering.

Today was quilting at Sandy's house, so I took my cutting-out-the=sashings project with me. I need 720 (planning to cut a few extras) and managed to get 600 cut today.

I will not run out of fabric, thank goodness.

I also got to meet Sandy's sweet new little foster pug, Lottie, who is 14, blind, and feisty! She's already learned her way around the house and where the doggie door to the yard is. All of the  pugs seem to enjoy quilting days, lots of hands to pet them and people to talk to them.
Posted by mehitabel at 11:04 PM 1 comment: