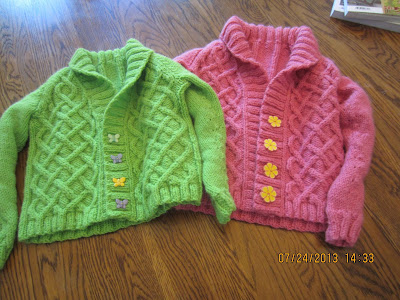 I know it seems to be all-quilting (well, all-pinwheels) all the time around here lately, but I do still knit occasionally. Took advantage of knitting group time this week to tackle sewing the buttons onto the two sweaters at the left.

Pink is for Audrey, aka A1, and the green is for Abby, aka A2. There are two more in progress, for the two boys.

Those have reached Sleeve Hell. The sleeves, you see, are worked on DPNs. 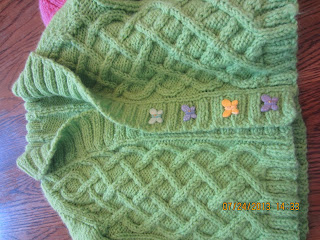 That's double-point needles if you don't speak Knitspeak! Kind of fiddly, and there seems to be a problem with my house and DPNs. As in, it eats them.

Seriously, it's now happened twice. The "spare" needle suddenly drops out of my hand and/or goes flying. I hear it hit the floor. And then I can't find it anywhere. So frustrating.

I have moved my chair, and the end table, and looked behind the curtains (there were ants, so now there is ant bait there too), moved the ottoman, moved the sofa, checked the edges of the rug. Vanished. 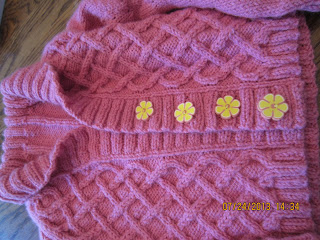 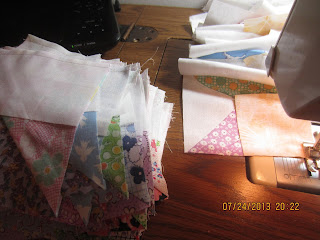 But the sweaters are done, and will be collected by their new owners this weekend. Just in time for a hot steamy August!!

And in the meantime it's back to pinwheels. This part of the process is going to look a lot like the last one, so if you want to see how they go together just check a couple of back posts.

The main difference is that these pinwheels will spin in the opposite direction. 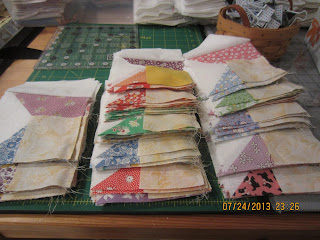 This was where I left off last night--at this point, all 150 have their yellow squares attached, and I'm sewing the second square onto this assembly.

Have the first 50 done and working my way through the second 50. Progress would be much faster, but my neuropathy is acting up and when the pain in my feet is too bad I can't sew any more--at least on the machine.

So tonight is turning into a TV/knit/hand sewing night. That's okay, it's Project Runway and some other DVRd stuff. Tomorrow we'll have to see what can get done! 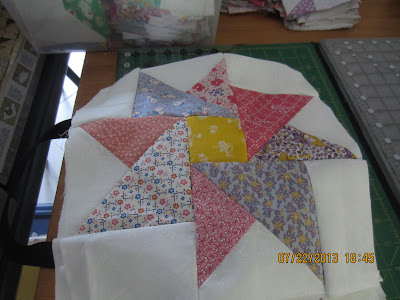 I'm beginning to feel like a one-note song, chanting about pinwheels all the time! But it's a project I'm really having a lot of fun with, and this batch of blocks have reached the stage when they really are looking like something!

Here's the first 50 finished blocks. I'm piecing them very randomly and trying hard not to duplicate any fabrics in any one block. Mostly I'm succeeding, but a few have slipped by me--probably due to the exciting programming I'm watching on my little DVD player! 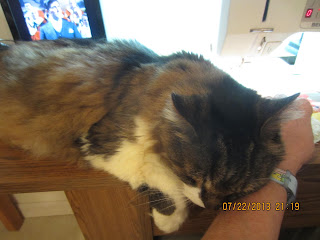 The supervisor is, as usual, making himself indispensable.  However could I mange to sew without an arm warmer?

Especially when it's very warm and very muggy out.

He does get up and walk around a fair amount--I think he gets bored, at least when he's not sleeping.
Luckily this stage doesn't require a whole lot of manipulation. 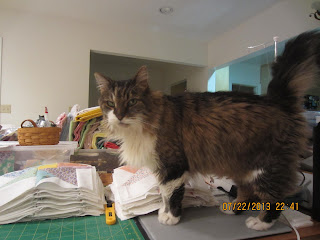 He is inspecting these stacks of blocks, probably noting with disfavor a distinct lack of cat hair on them. He'll remedy that soon enough!

The last two pictures are the blocks in stacks as I've finished them--first, two stacks of 50 each, and then 3. That's the first 150 blocks done!

Just a refresher, each quilt will take 50 blocks. I have another whole set of these to start sewing together now. 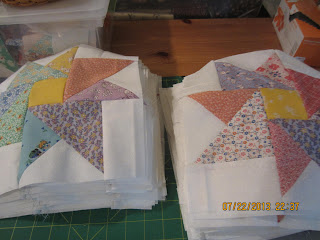 I've debated about whether to start making the quilts, or go ahead and sew the next 150 blocks. I'm opting to sew the other blocks, because I know my Oooo Shiny! syndrome all too well. I really want to get all of these quilts done more or less simultaneously, because if I don't, well, there may be a few more UFOs to add to my list over there ---> and I really don't want to do that! 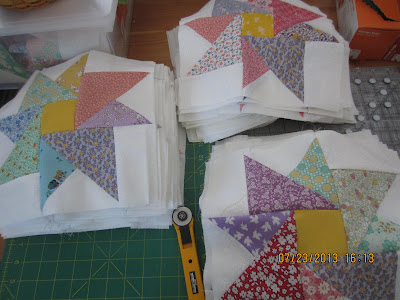 So it's onward and upward, and tomorrow is another day and a fresh stack of blocks and yellow squares and pinwheel assembly!

Oh, and I have to finish cutting those 750 sashing strips, too. Not sure if I have enough cornerstone blocks, but I'll soon find out...
Posted by mehitabel at 11:33 PM 1 comment: 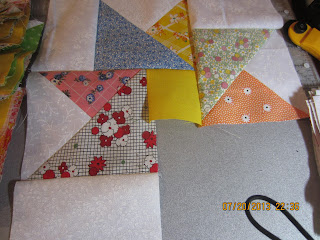 Starting just a little out of order here, because to me this is the most interesting picture--it's my current stage of "pinwheeling!" When I quit for the night, I had the first dozen of these up to this stage.

I've been busily sewing most of the day, a good thing to do when it's hot and muggy outside. I kept getting reminders of the outside temps whenever I would venture out to the garage, which is where the laundry lives. Yes, sewing and doing laundry are pretty compatible activities. 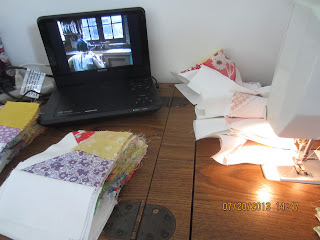 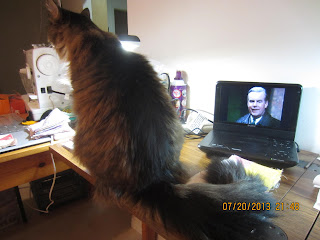 So one of the first things I did today was to finish sewing all the yellow center squares to the first 150 blocks. I had counted the yellow squares and the pinwheels both, but I wound up having to make some adjustments anyway.

Apparently my math failures extend to counting to 50; With these, I set them up in stacks of 10 and then groups of 50. I'm pretty sure there are now 150 of them.


The Supervisor was giving me a bit of the old "turn the back on the annoying woman" routine. That tail makes a great brush for whipping blocks out of the way.

I really did not want to sew any tail fur into the quilt blocks. He finally got fed up and left. 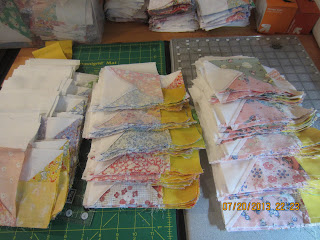 Here's my 3 stacks of 50 blocks with yellow squares attached, with a second square added.

Today's entertainment was provided by Lord Peter Wimsey, who sadly is not nearly as entertaining as Albert Campion or Inspector Alleyn.

I had to take a break for a quick viewing of Wyrd Sisters, a cartoon version that's really only fair to middling. However, it was a gift from a friend, so the price was right. 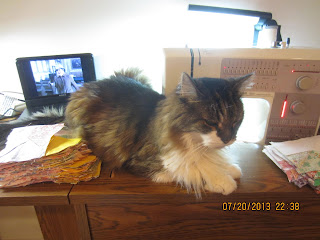 This was just before I quit for the night. I had run out of thread and had to put a new spool on the machine, which seemed like a good breaking place.

Especially since the Supervisor was putting his foot, er, his butt, down. My DVD had reached the end as well.

This one was The Nine Tailors, and while they took a few liberties with the story lines, I think it worked all right. In a book, long stretches of exposition are okay, but in a film it can tend to drag. 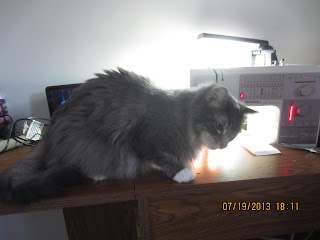 I seem to be getting frequent visits from the second cat, too. She's very curious about what's going on up here that is more fascinating than petting the grey cat.

She's really hard to work around, because she wants attention, and petting, and she's determined to get it.

She's also fascinated by things that go up and down, and I really have no desire to sew into a cat. I've sewn into my own fingers (twice) and we're not doing that again, ever, not to me or anyone else. 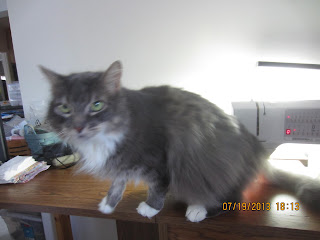 I can't decide if this look means she's daring me to turn on the DVD player and put some fabric on the machine, or if she just wants to be snorgled.

She really is a pretty little girl, though like most shy and skittish cats, she's a little unpredictable. I try hard not to scare her--don't want to mess up her progress! 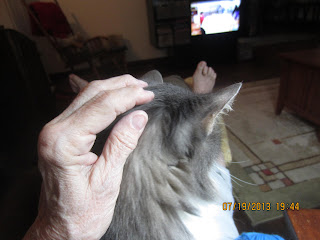 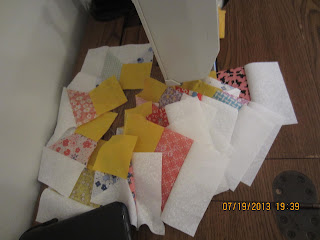 Last night while I was watching Project Runway and knitting,she came and curled up next to  me in the chair and purred away.

Then she climbed up onto my lap for some skritching. This picture is proof that she lets me actually touch her.

I think she was bored with the opening episodes of PR. (I DVR'd them  so I could watch when I wanted to. I am doing that more and more often now.)  I thought it was interesting, and there were some pretty decent designs, though some of the others stank.

But I love Tim Gunn to bits, and he even managed to make that awful plaid jacket look natty and stylish.

So, a couple more pictures of sewing yellow squares to their first units. I told you, I'm doing this upside down today.

By the way, Math Fail reared its ugly head again on me. However, I was able to catch my mistake in time. 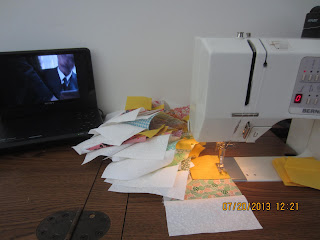 What happened was that I had used up all the white fabric I had in cutting the triangles and the rectangles, so I needed to get more for the setting triangles on the quilt. Tuesday seemed like a good time to do this, since I was at the shop and they'd just gotten in some new white-on-whites.

I need 27 squares*, each 17.5", for the setting triangles for all 6 quilts. Round that up to 18"--I'd rather have my triangles a little larger so I can trim them down or "float" the piece--and I can get 2 out of a half-yard of fabric. I was preparing to buy 14 yards of fabric--cut the first 7 yards and started cutting squares when it hit me.

Two squares out of half a yard means 4 squares out of a yard. Seven yards will give me 28 squares. Oops! I did wind up getting another yard and a half to cut the corner triangles** out of since there wasn't enough left from cutting the other squares. But I ditopsdn't have to buy 14 yards...

* and ** for those of you who don't quilt, the setting triangles and corner squares are cut differently to avoid having bias edges on the quilt. Squares are cut diagonally and then again on the diagonal to yield 4 setting triangles--the square used is generally 1 1/2 times the size of the blocks in the quilt--and the corner triangles are a square, the size of the blocks or a little larger, cut in half. All will be clear when you see me starting to put these tops together.

I'm confident that I will get there. So far I've been able to avoid the "Ooooh---shiny!!" temptations. But it's hard!!
Posted by mehitabel at 12:14 AM 2 comments: