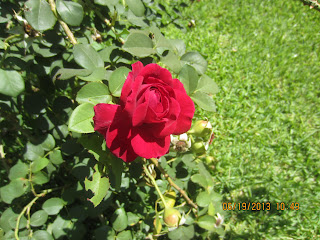 Today I spent some time out in the yard moving hoses around to try to get things watered. I try to deep-water once or twice a week rather than do a more shallow sprinkling, because I think it probably is healthier for the plants.

The rosebushes are having another bloom cycle. I love this deep red one--these top three pictures are the same bush, with the top one being a little more true to the actual color of the blossoms. 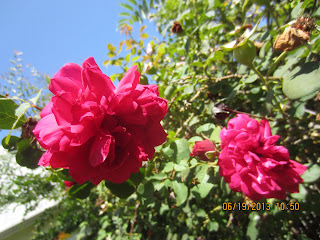 I really need to get out there and do some pruning. It's hard because I am still not able to stand for very long at a time--even on the grass. Plus, the back yard gets morning sun so by 8 am it's hot out there and I can't stay out very long.

Yes I am a delicate flower! Actually, two of the meds I take specifically say to avoid prolonged exposure to sunlight.  Plus, I don't like being hot.

Oh well. Maybe just a few snips at a time and eventually they'll look a lot neater! Plus I could cut some flowers to bring inside. 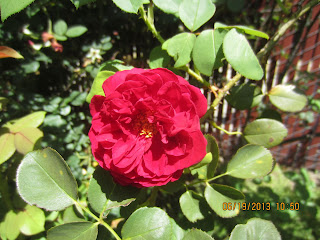 I only have a couple of hybrid tea roses, though, and the David Austins really are better enjoyed on the bush rather than in a vase. 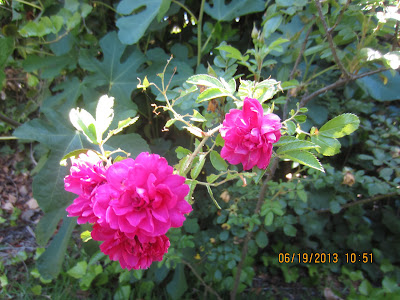 I spent a lot of time on line tonight trying to get the right variety for this bush. I have two of them--one red, one pink. They have small leaves, exceptionally thorny stems, and fringed petals.

It makes me sad that I can't remember the name of the variety any more, because I had made a point of getting these two bushes because they were fairly rare. 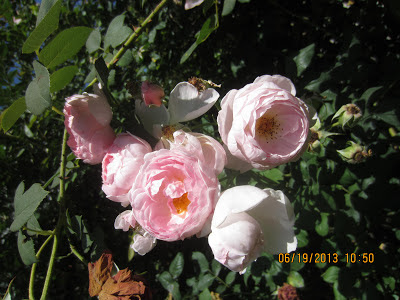 This pretty pink charmer is a David Austin called Sceptered Isle. Yes, I've taken a lot of pictures of it, because I really really like it!

The white bush is Iceberg, which is a very popular variety out here--it seems to thrive in this climate. I have this one and a climbing Iceberg which isn't too happy with me at the moment.

Well, neither of my climbers are. They should have wire or something to support them. 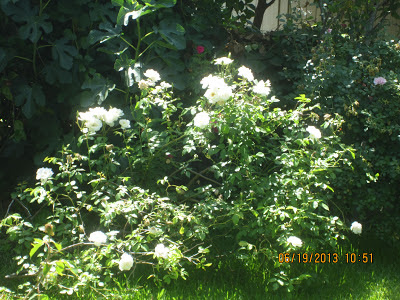 When the old fence came down, so did the wires for the roses. I haven't replaced them--it's one of those jobs I can't really do myself.

Last rose picture is the little pink thorny one. I am going to find my Sunset garden book tonight and see if it has any information. 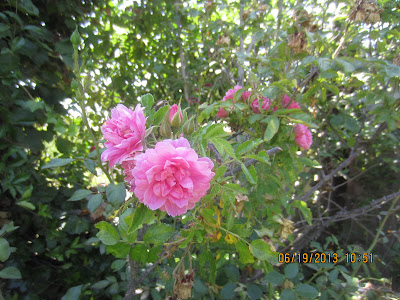 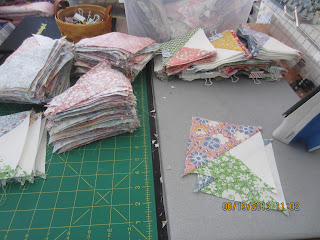 In between moving hoses around and doing some laundry, I finished pressing the first half of the pinwheel blocks, and spent some time trimming them.

I couldn't resist--I had to count to see how many blocks I have! Care to guess?

Well--this batch, the ones that spin in this direction, numbers 537. 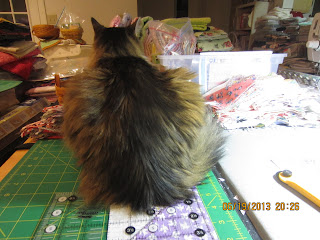 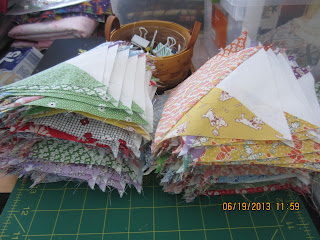 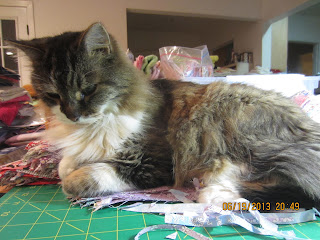 So double that, because of course there are just as many that spin in the other direction too.

One quilt takes 200 of these squares, to make 50 blocks. So I can make two quilts from each directional spin, plus another one with 34 blocks.

All because of my little math fail a few weeks ago. Let that be a lesson to me, I guess.

So the quilt I really wanted to make for all this time, has now become 6 quilts. Sigh. Yes, I will go ahead and make them all.

Remember I'm the woman who has 7 kids, 6 kids-in-law, 8 granddaughters, 5 grandsons... and 3 great-grands as well. I don't think there will be a problem finding homes for 6 quilts--and if one or two go unclaimed, well, there are lots of charitable groups that will be happy to have them.

Of course my Quilt Supervisor has his own opinions on the matter.

He really believes that the proper use of my time is to feed and pet the cat. That's why he parks his furry self on my projects.

In fact, right now I'm getting The Glare because apparently blogging means less time to pet the cat. He's curled up where the hot air blows out of the laptop, and has to keep turning around because he overheats.

Guess I'd better go pet the cat before the laptop overheats!

A Finish, and Some Progress 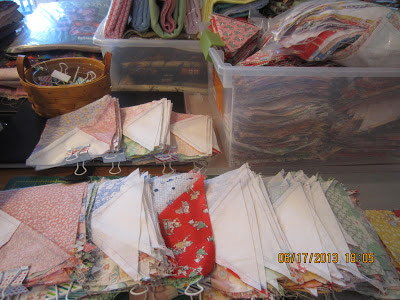 So the pinwheels are coming right along. I had pressed a bagful on Friday night and clippied them into groups of 25--I have a total of 225  from that bag.

Tonight I finished trimming the last 100 blocks. It was a quiet night at class, just right for this kind of activity. 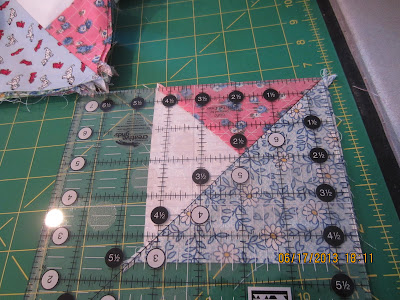 Here's a quickie view of the ruler I'm using. You can see how the diagonal lines up with the seam line on the larger half triangle; I just trim away everything over 4.5".  Not too difficult.

Even the blocks that I had paired with the 5" precut squares have enough leeway to let me square them up.

Next task will be to press and square up the rest of the baggies-full. It actually goes pretty quickly, and I'm planning to set up my little video player and then I can watch a movie while I press and cut. I can also do some of my exercises while sitting there--so definitely multitasking! 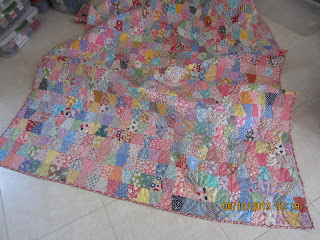 The Tumblers quilt is done. The first picture was taken just before its bath, which happened today.

The next two show it laid out across the guest bed.  I haven't measured it, but I think, based on the width of the mattress, that it's probably 60" wide and maybe as long as 90" or a little more.

So an extra-long twin, or a throw on a larger bed.

I admit to being a little surprised that it came out so much narrower and longer than I expected, based on how it looked on this same bed before quilting. 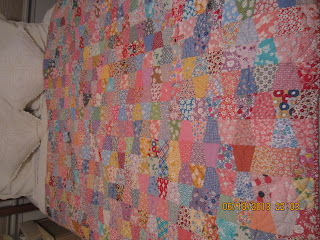 But, it's still a pretty quilt and should be fun to use. I'm hoping it will find a happy home soon!

There are a LOT of different prints in it!  Probably a few more duplicates than in the pinwheels, but still an enormous variety. I love it!

And yes... I did start sewing down the binding on another quilt as soon as this one was done. I'm working on the Lily of the Valley quilt now, which is quite a bit smaller. It's the third of six that need binding. 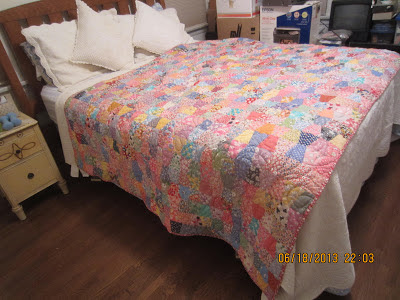 What's In A Name?

Another day when Blogger is playing with my pictures and my mind... I may need to redo some of this post because it's not going to make much sense otherwise!  Oh well... forging ahead!

I read an article this morning (can't find it right now and not sure I want to give it more publicity) talking about blogging which made some rather condescending remarks about "personal" blogs and how, of course, anyone can write a blog to express their personal thoughts, but no one really wants to read those. The key to identifying "those" blogs?  They have "musings" in their names.

So tell me, please--do you get turned off by my blog name?  What else could I have called it? Am I wrong to feel this was a put-down?

Okay, moving on to happier things. Just in case I haven't Double Wedding Ring'd you to death, here's another in-progress photo that my son found and scanned in for me. This was taken at a friend's "cabin"--two story, five bedrooms, not exactly "little cabin in the woods"--back around oh, 1988 or so. Four or five of us had gone for a sewing weekend away, and I got the first strip of rings assembled. 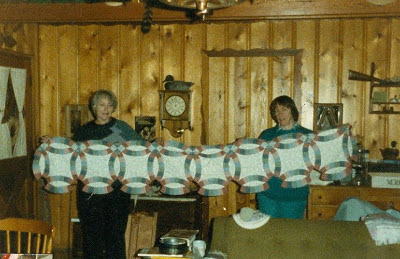 This quilt was done using a pattern that Mary Ellen Hopkins had done, and it had you setting the corner squares into the spaces after the rings were added, rather than making them  a part of the melons as most other patterns do. It actually worked very well, because it was pretty easy to make them fit.

I even had hair back then... 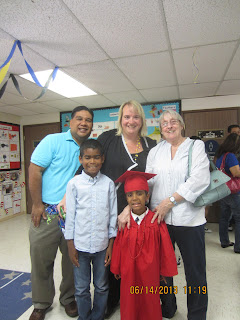 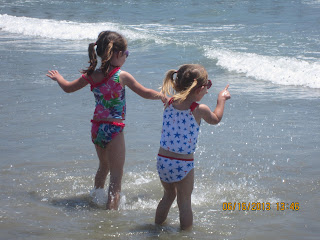 Fast forward to this weekend, which had some good grandma-time for me.

Started on Friday with N8's preschool "graduation" at his daycare. He's been in with the kindergarten class, although he'll be starting "real" kindergarten at the local elementary school this fall.

Had an interesting conversation with G, because I tried to tell him he's now a second grader, and he kept insisting that he wouldn't be in second grade until fall.

I love talking to the kids. They have such a unique take on things.

Sunday was Father's Day and a great day for the beach. So  I got to accompany these two cuties and their parents. 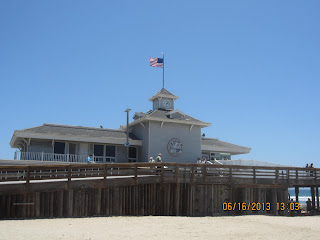 Lots more pictures on Flickr if you want to see more sun, sand, and fun.

I discovered that I can apparently walk barefooted in beach sand without too much pain, so I enjoyed that part of it particularly.

The water was cool but not uncomfortably cold. No, I didn't go in any deeper than my knees. That would require that I actually own a swimsuit, which I don't currently.

May need to remedy that soon. One thing at a time. I have new shoes, and am now working on breaking them in for my upcoming trip. And, you know, that thing called "walking" that I need some practice doing. 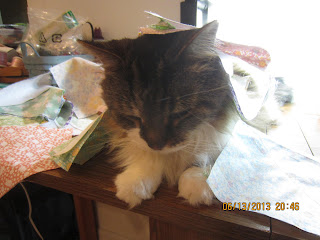 Ready for another update on the pinwheels?

Here it comes, ready or not.

The supervisor kept insisting on helping as I was trying to finish sewing the last of the blocks, so I tried draping them over him.

It was a cute effect, and it didn't discourage him. I didn't really think it would! 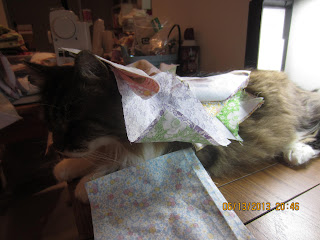 So at this point, all of the blocks have been sewn and they've all been cut apart--in other words, each "square" is now two blocks.

I spent most of my time on Friday night at Quilknittys pressing one stack and trimming them.

I didn't bring all of them with me--at that point some of them were still not cut apart.

I'll try to get a picture later today when I set up the workroom to get going on the rest of them. I've been clipping them together in groups of 25 just so I can keep track somewhat of the ones that are done. 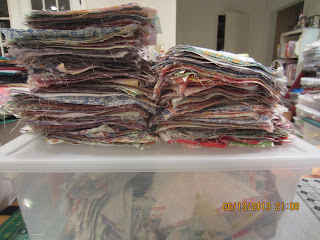 I have 75 pressed and trimmed. Of the batch I brought with me on Friday, there were 204 blocks of one direction, which means there should be over 400 just in that group.

It takes 200 to make one (large!) quilt. I have no idea how many are in this second grouping, but I think I'll be making at least 4 quilts out of all these pinwheels--maybe more, if I make them a little smaller.

I guess I;d better stop blogging and get busy with the iron and the squaring up, huh?
Posted by mehitabel at 12:17 PM 4 comments: