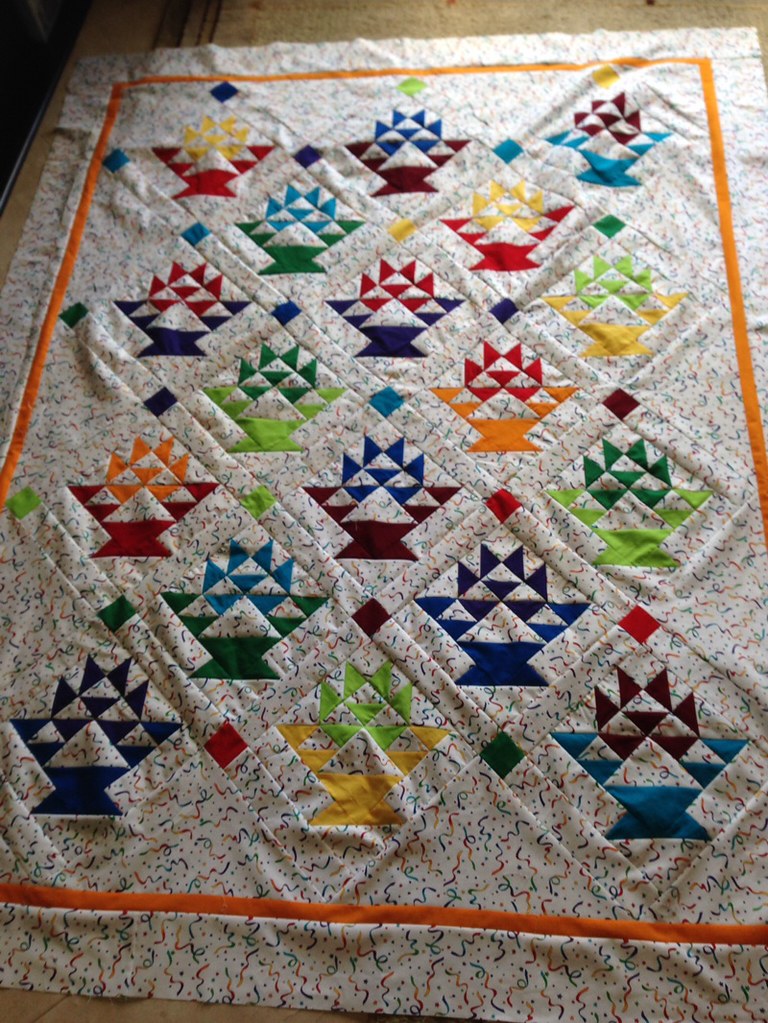 The basket quilt top is done! Now to find it a back, and send it off to be quilted.

I opted for a 4" border of the same background fabric. The HST (half-square triangle) idea didn't work out: it pulled too much focus away from the baskets, so in this case plain is better!

The quilt is much larger than I originally thought it would be, but then it was also originally supposed to be 2 smaller quilts, so I guess I should be glad that it isn't big enough to upholster all of Glendora!

There are two more blocks that I've pieced into a strip for the back. Both of them are orange and red, different reds (one leans toward orange and the other is more of a blue-red) but they look fine side by side and they'll jazz up the back. Assuming I can find what I want to put on it! 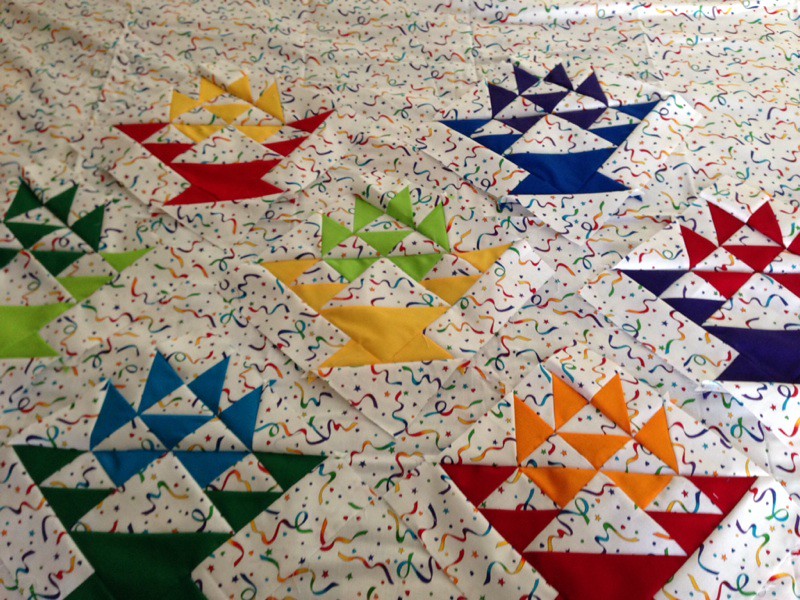 Wrapping u with a couple more pictures of the quilt top. These were taken when I was experimenting with layouts--you can see that if I'd gone with the large squares in between the rows, I'd definitely have had a much larger quilt! 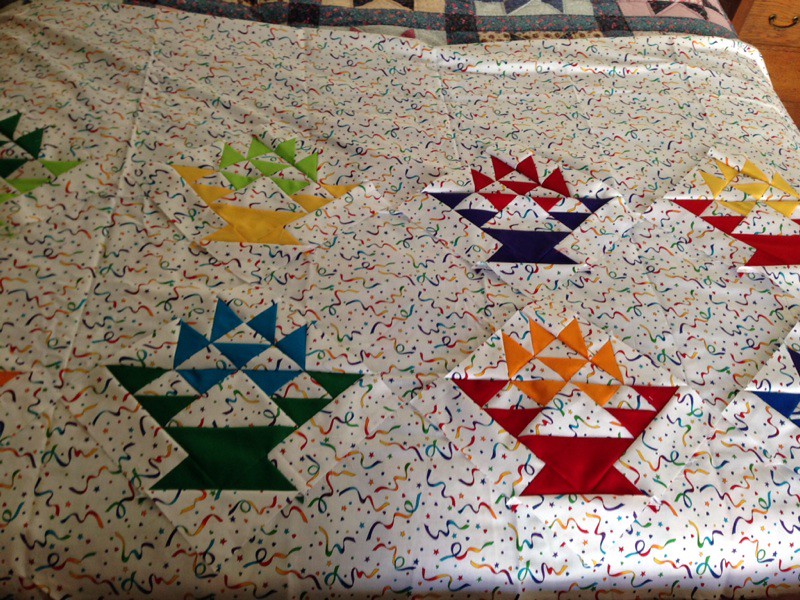 This post is a bit of an experiment--I was trying to find a way to post pictures that I've taken with my phone that works well. So I used the iPad to load the pictures using BlogPress, but it only lets me upload 5 pictures to a post.

I haven't done much with the cats here, so here's a shot of Shyla being not-so-shy any more! She actively seeks out attention and affection, especially if I'm on the bed reasing or playing games on the iPad. There have even been a couple of times when both cats have been up on the bed with me at the same time. However, since I then have to be petting a cat with each hand, I can't get pictures.  Still, it's progress! 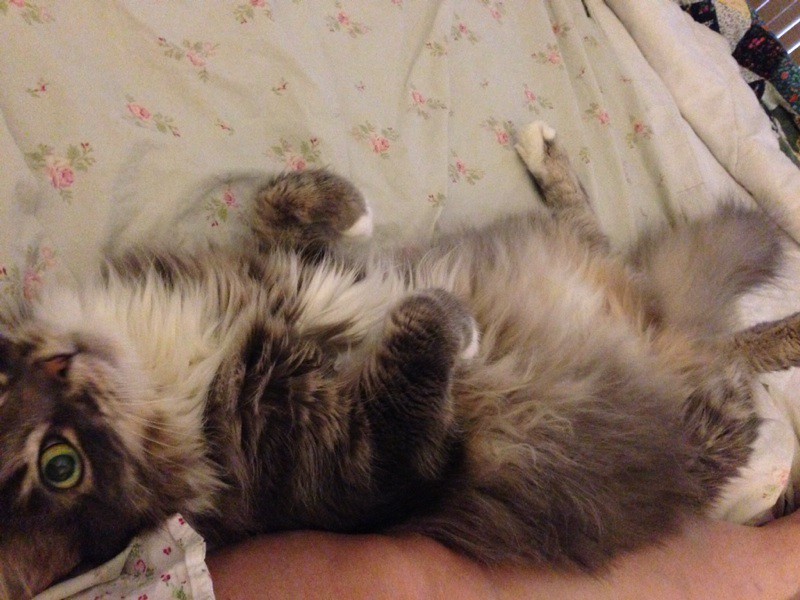 The last picture is of the 18 (!!) bags of templates and newsprint piecing papers sorted and prepped for my project for Asilomar next year. I kind of hate to have to wait that long to start sewing on it, but it may take me that long to round up and prep all 22 fabrics for the quilt.Yes, you heard that right--there are 22 different fabrics used in this pattern!

I supposed I could have bought the kit--but while I do like the colors in it, mostly, they're not my favorites. So I'm audtitioning fabrics from my stash to see how many I can find at home! 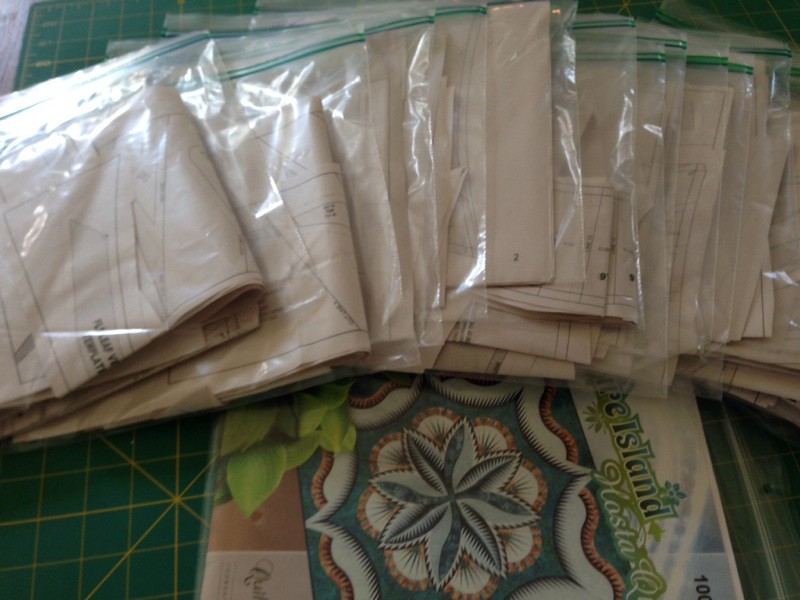 Back to "work" here--I'm hoping that my feet will be up to at least letting me get one of the pinwheel tops pressed and trimmed--I'd love to get those done too! Also need to do some spelunking to find backing for the baskets and one other little batik quilt, then I can box them up.  That would be so cool!

om my iPad
Posted by mehitabel at 12:40 PM No comments:

The basket quilt is coming right along! The blocks have been joined, and the top now needs a press and to have the corners trimmed down. The first border is going to be orange--I think I have just enough to make a 1" border. Then I'll audition a couple of ideas I've been playing around with. Default is just to put about 3" or so of the ribbon fabric for the border--but I have a LOT of half-square triangles cut out of the print, so if I can get enough to match them out of the solids, that might be cute too. 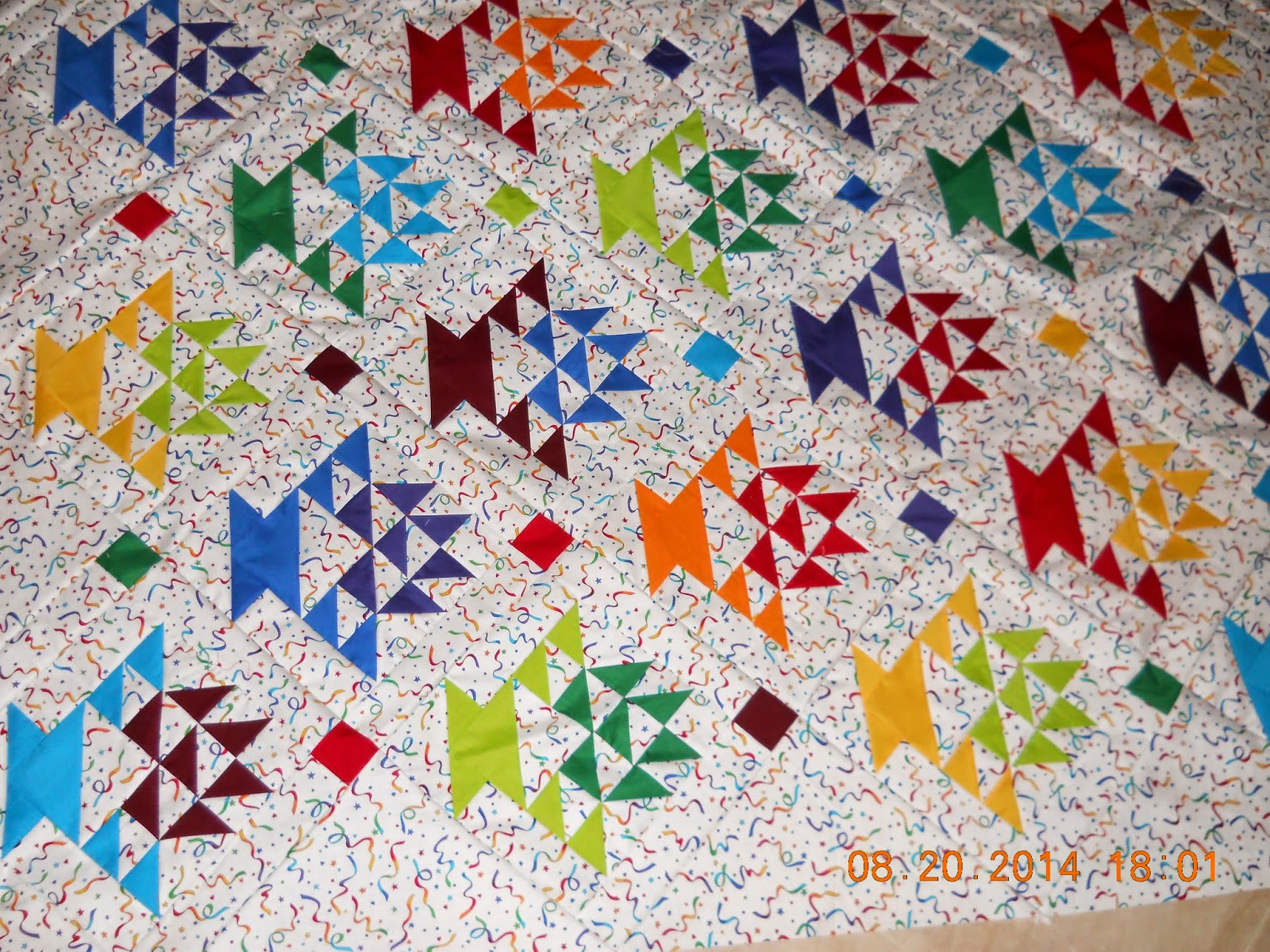 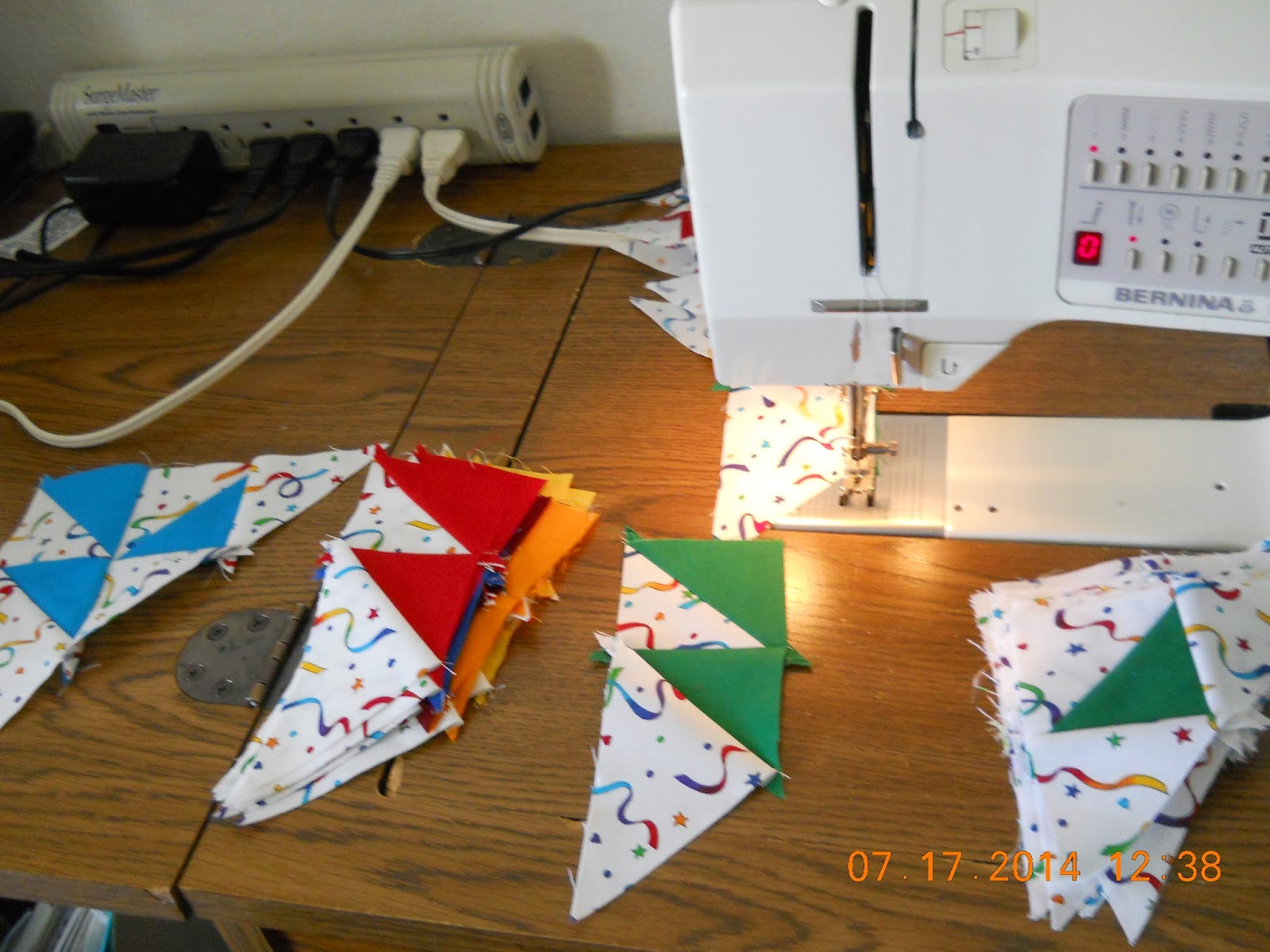 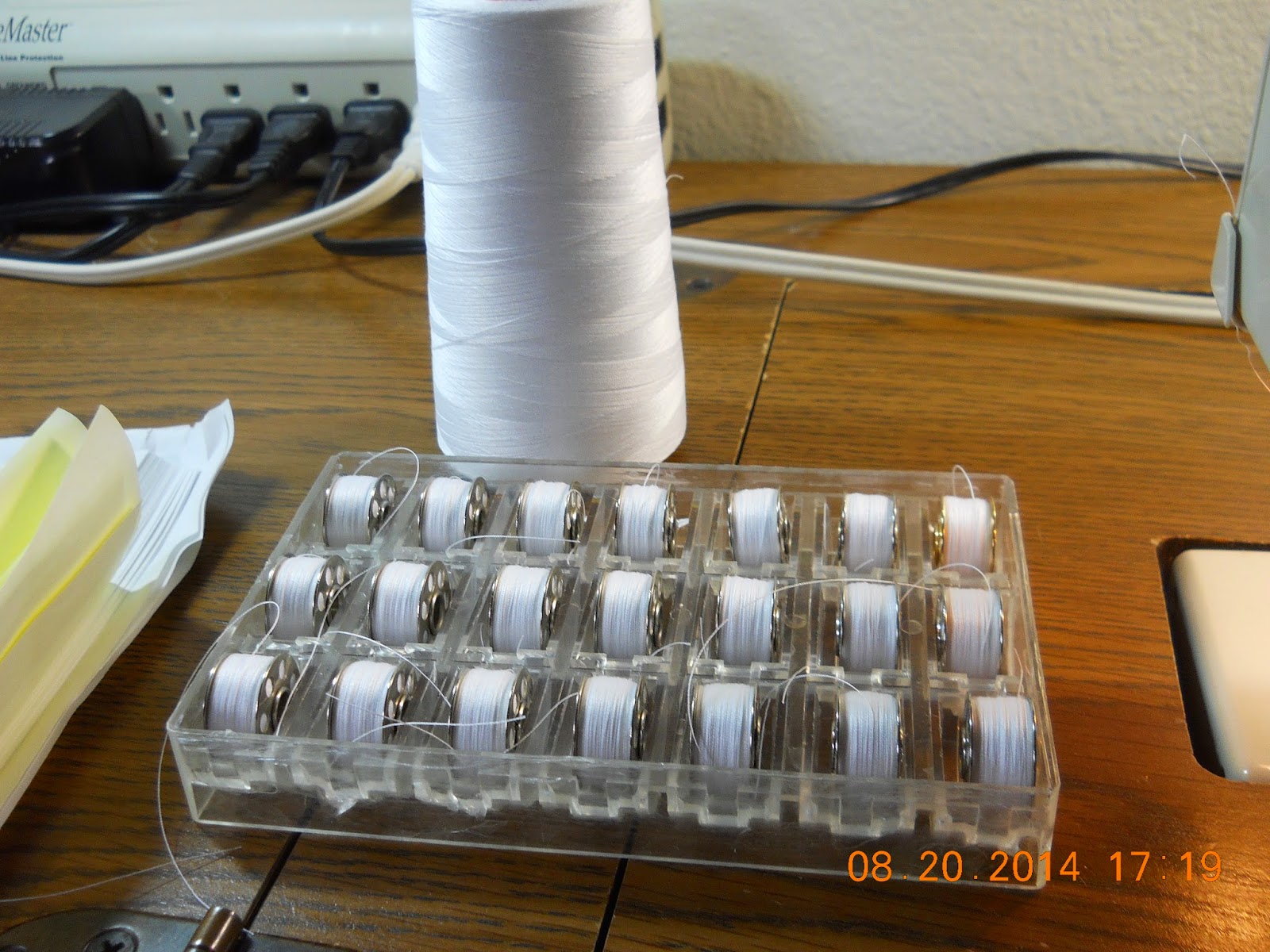 This project has been a lot of fun. Finding the pieces all cut and ready to assemble was a good break from the pinwheels, which have reached the stage where they need to be pressed and trimmed so the borders can go on. A big job made worse by a persistent nasty pain in my back (it's right at the base of the incision from my surgery so probably nerve damage, though the doctor says the muscles are really tight.) That makes it hard to stand for a long time, which pressing 6 queen-sized quilts with lots of seams involves.

Oh well. I had to take a break to wind another set of bobbins. I got a cone of white Aurifil 50 wt, a thread I really like for piecing, so that made the bobbin winding go really quickly. Now I'm ready to rock and roll knowing I have a good supply of bobbins! 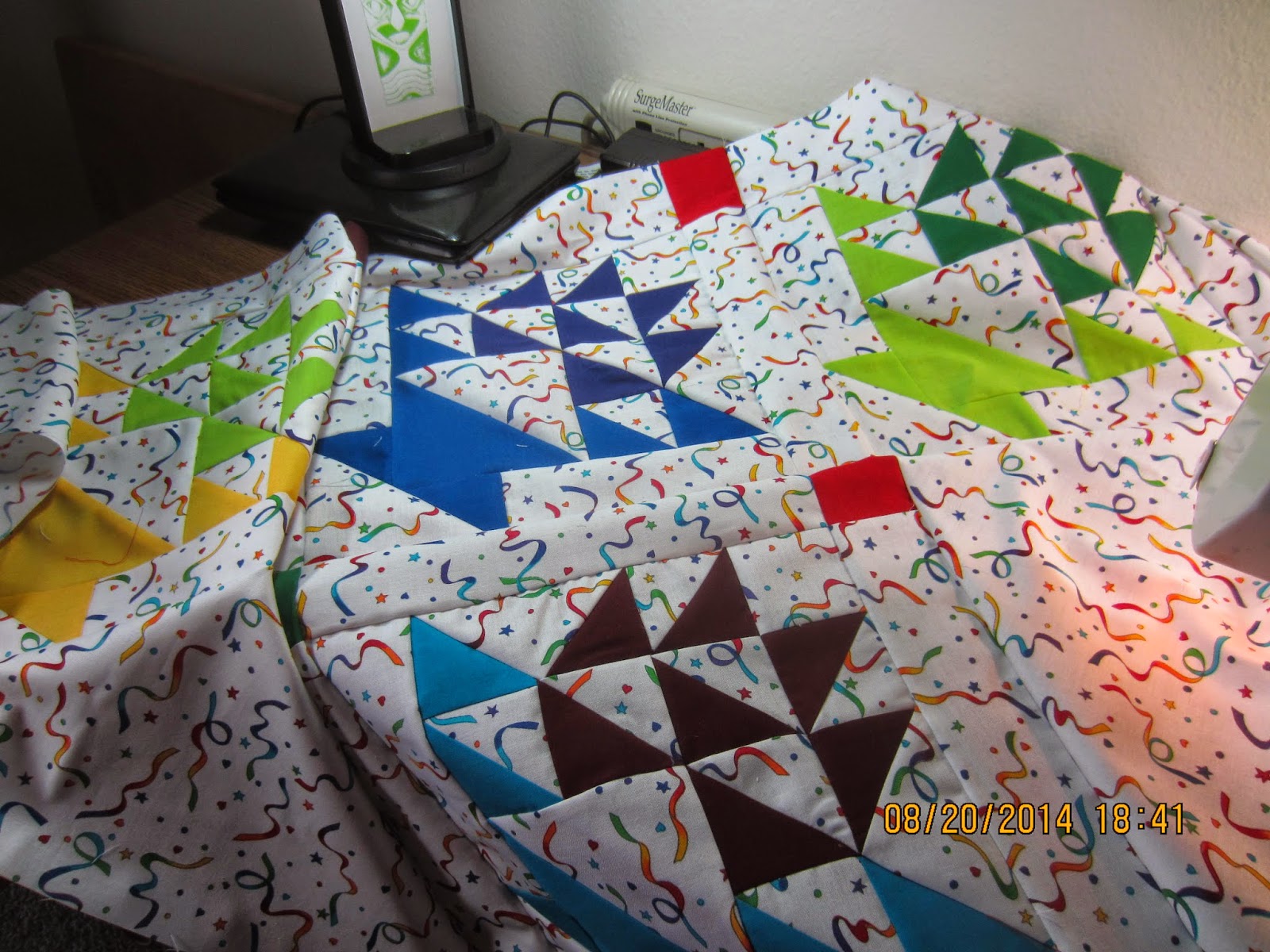 Some progress pictures of the assembly process.

I have two blocks left over, which I'm planning on putting on the back of the quilt. Somewhere.

The pattern is the Grape Basket from Judy Hopkins' Around the Block.  It gives cutting measurements for five or six sizes of blocks--these come to 10" before the sashings are added.

I really like the book. It's an oldie but a goodie! I've used it for other projects, too. Fun if you wanted to make a sampler quilt. 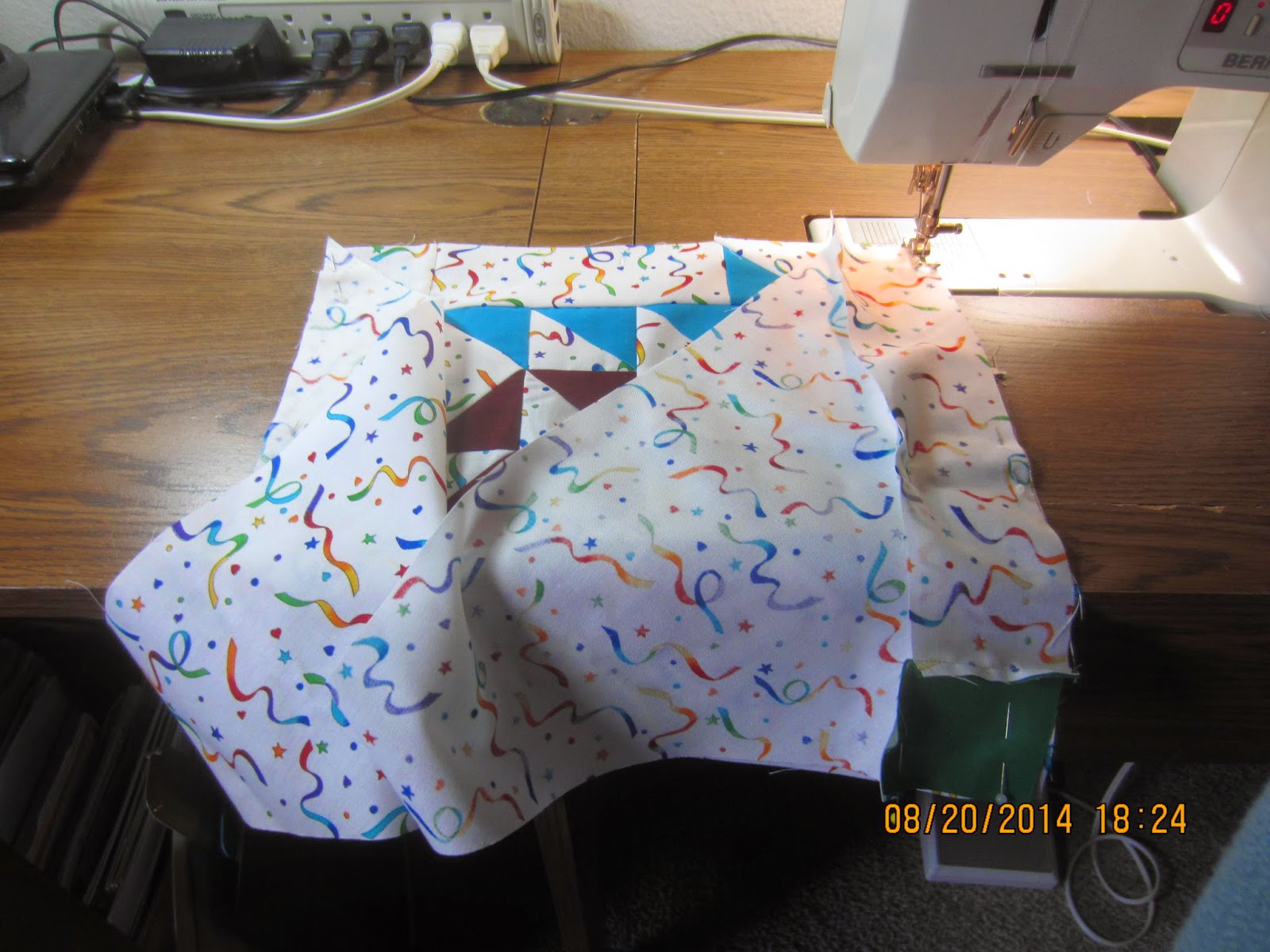 I'm still working on organizing and categorizing all the tubs and boxes in the garage (and the storage unit, oops. You remember that--it was just for "staging" the move. Sadly, there isn't room here for everything so there's going to be some more culling going on. Just takes time and effort, and summer is my least favorite time for working outdoors.

It's been very humid the last few days. We've had some spectacular clouds, which is pretty, but no rain and little relief. Even in the house, with the a/c running, it still feels sticky. 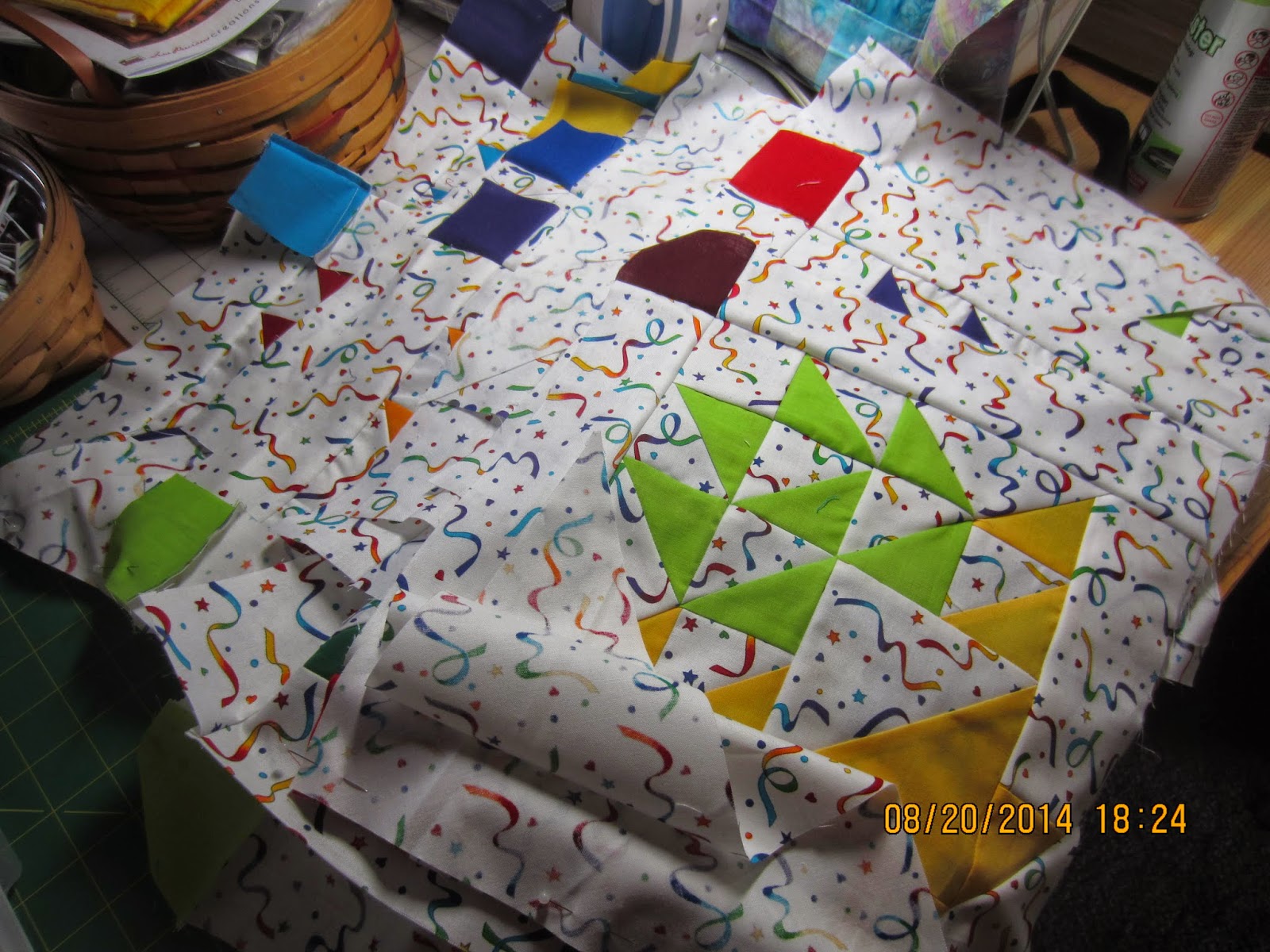 Anyway I found another tub of mysterious objects. A couple of panels--the kitties are for a doll quilt and matching pillow.

I think that could be a very quick little project--and Robin just brought me (along with a trunkful of projects, two big bags of yarn, and a huge tub of fabric) a small roll of batting--Mountain Mist poly. Perfect for a dolly quilt, and to help me get my machine quilting chops back up to snuff! 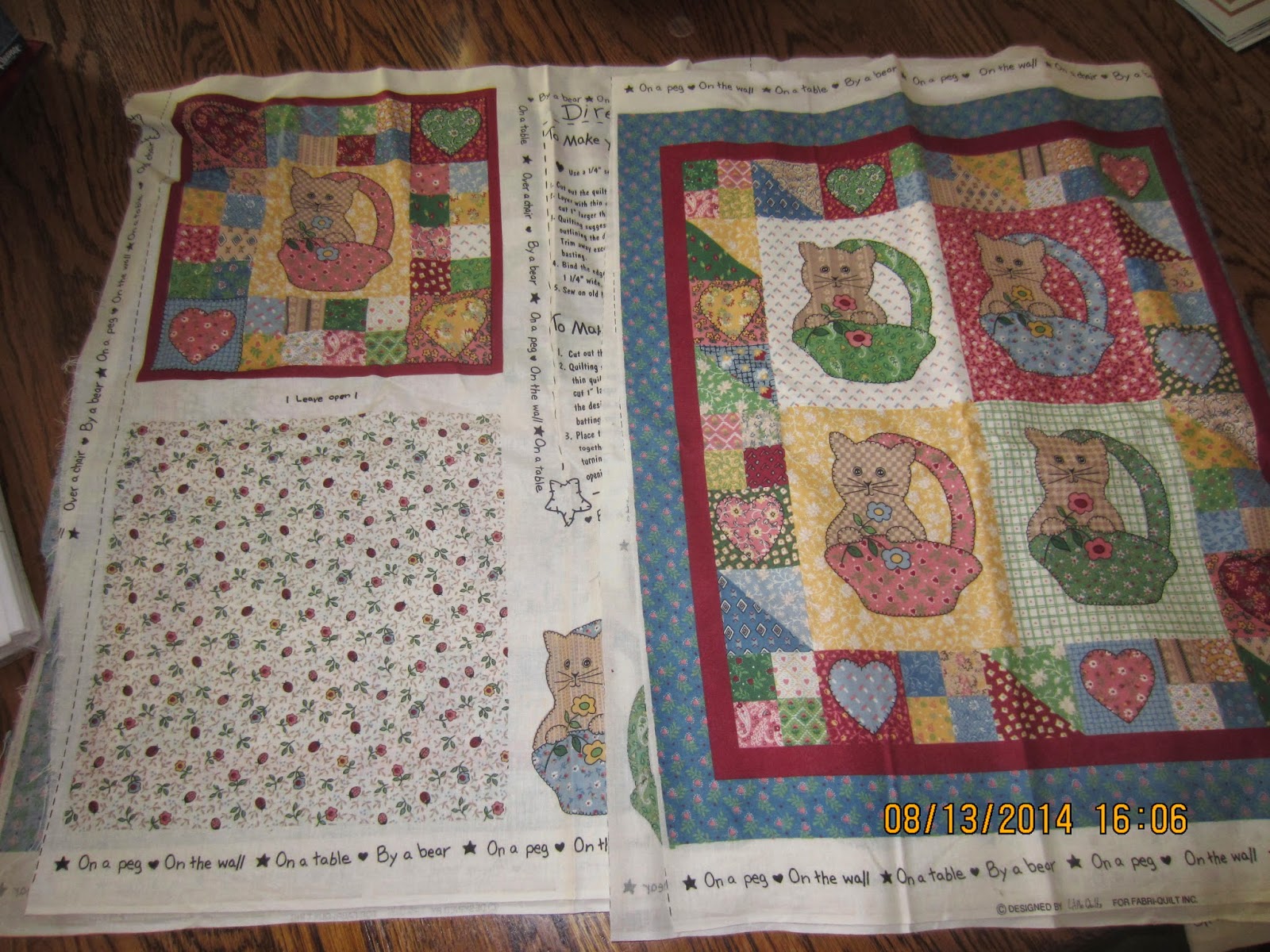 Because the baskets, along with a couple of other quilts and the pinwheels, are getting sent to the longarmers. I've got a dozen or so projects I want to quilt, so I need to send some of these out. 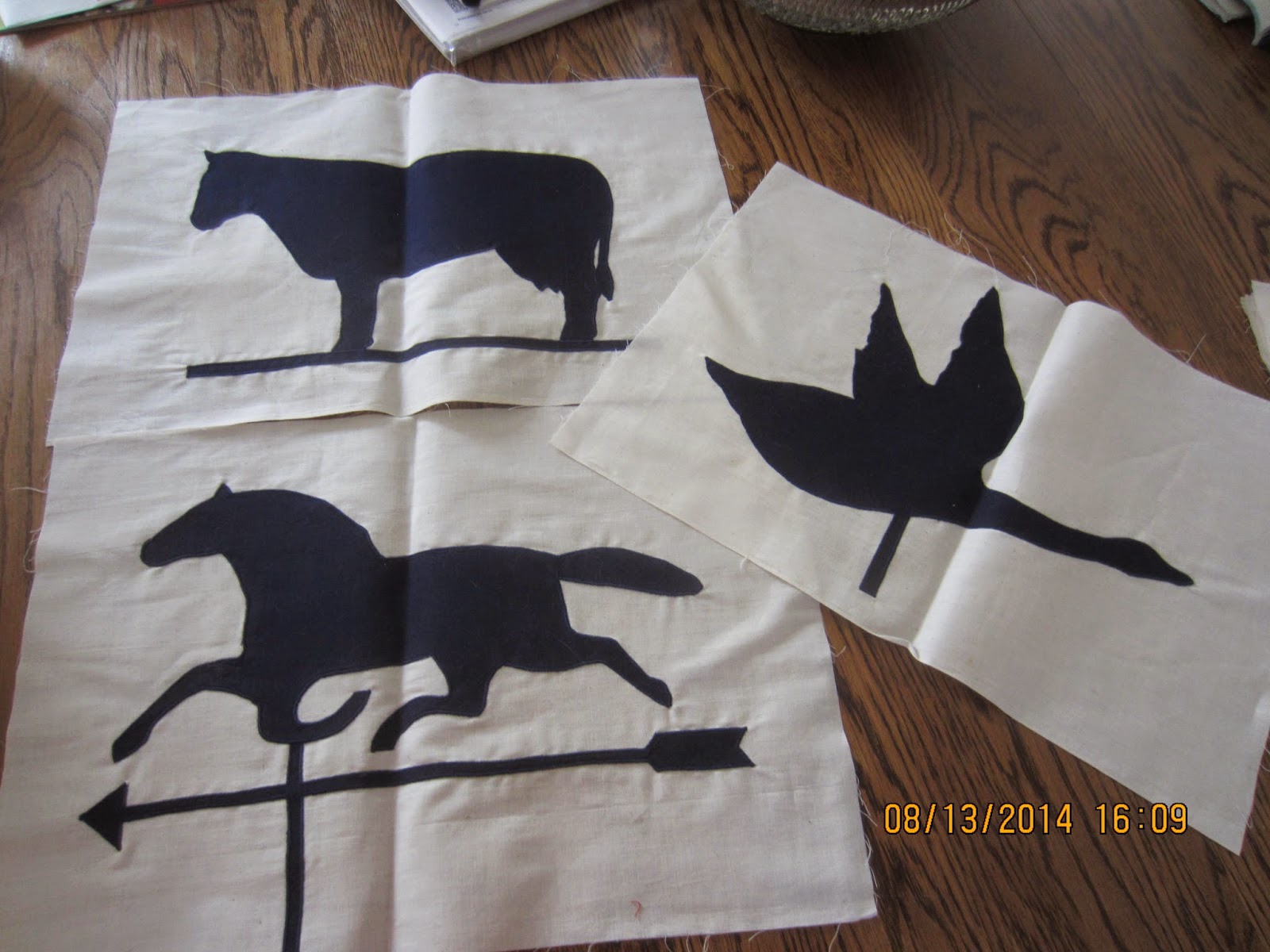 The weathevanes are an older project--really nicely done, back when I was doing a lot of machine applique and had great control of the machine. Helps that the 1230 has a nice satin stitch, too. There are 4 other blocks--not sure what happened to the picture! Originally they were supposed to go with some red-white-and-blue sampler type blocks, but I decided that I didn't want to do that. I think they will just get some kind of alternate blocks--maybe Log Cabins?--and borders, and keep it all in the navy and white. Should make a decent size wall hanging. 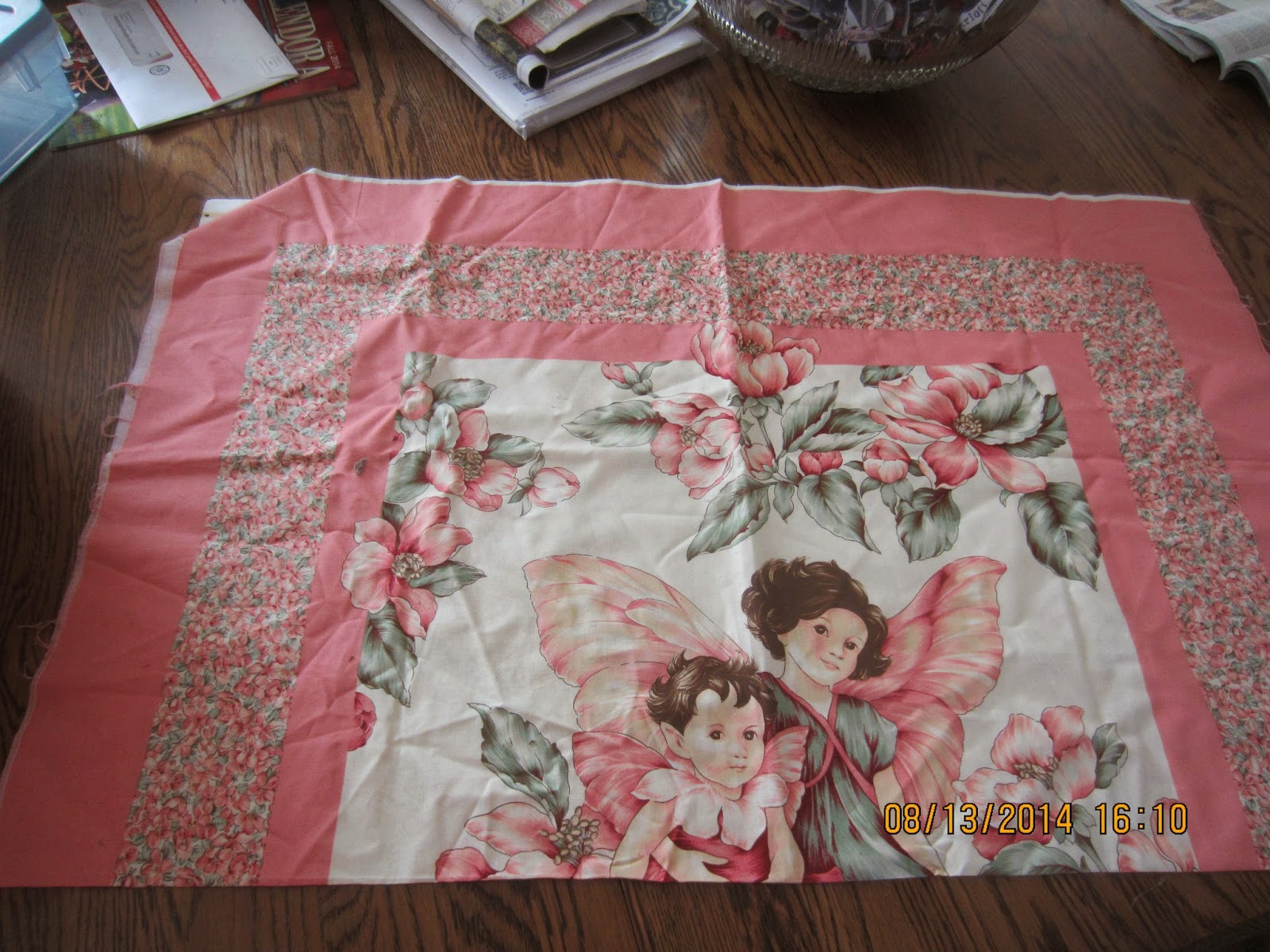 The flower fairies panel has a price tag in pounds sterling and a Peter Jones label. Guess I got it in England, huh?  Might be a good practice piece for my FMQ skills. I'm pretty sure that somewhere I have something that will work as a back and binding.

Then there's the assortment of black/white/color blocks. I'm pretty sure these were from a swap. They are different sizes so my thinking is maybe angled borders--that kind of wonky look. 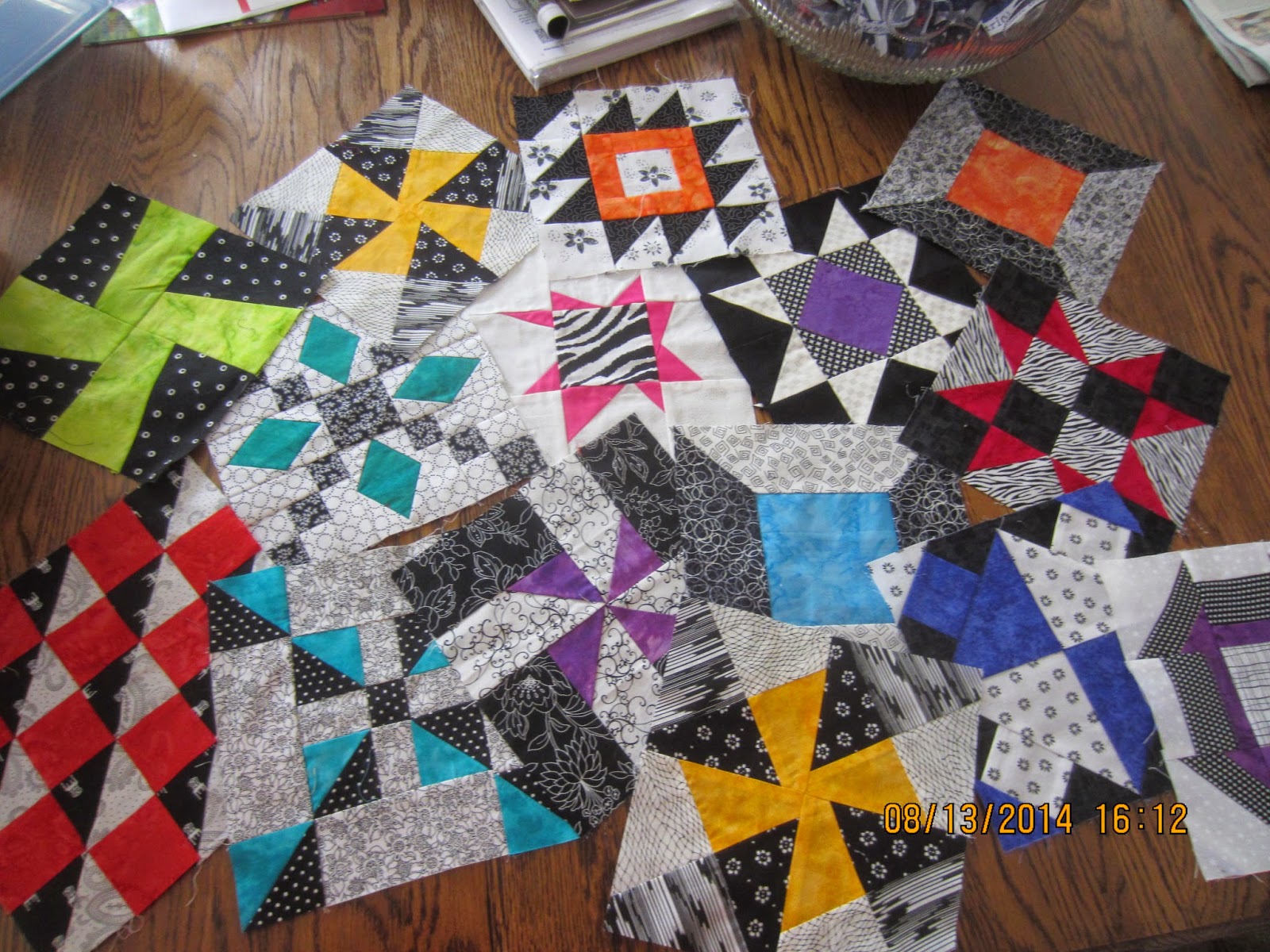 Anne thinks she has some of the Christmas blocks. If she does, she'll get these to go with them. If not, well, we know a lady in Fresno (waves to Gerry) who will do something with them!

Anne and I have been kind of using up some of our theme fabrics--the pictures I have of them are from my phone, so I'll need to do another post with those.  It started with Ethel and her fruits and veggies quilt. She had a bunch of leftover fabric, so we thought they could go into a Yellow Brick Road-type quilt. 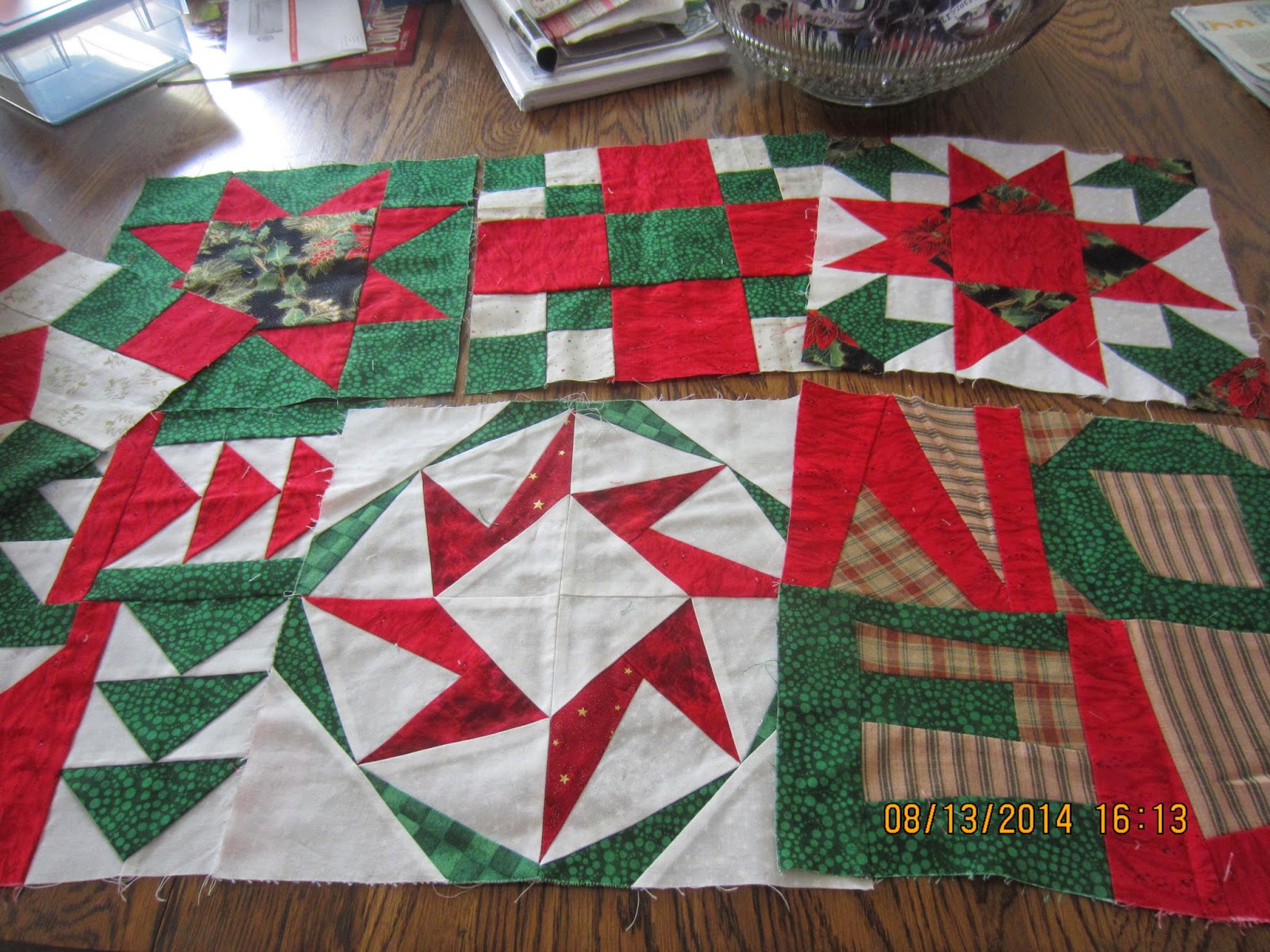 Yeah. Anne had some of those fabrics too, so we spent a Monday cutting them up. She's made 6 quilts out of the pieces!

Then as she was finishing up the last one, she mentioned that she had some patriotic prints that might work too. If I had been a good friend, or a sensible person, I'd have told her to forget it--but no, I had some patriotic fabrics too. Another marathon cutting session, and she at last count had 317 blocks. That will make anywhere from 6 to 10 quilts depending on size...  But, they can go to Quilts of Valor.

Have I mentioned that Anne is a quilting fool? Her description! Between her dogs and her quilting, she's always busy! A good thing...
Posted by mehitabel at 9:51 PM 1 comment: