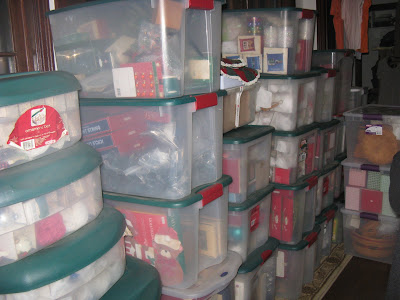 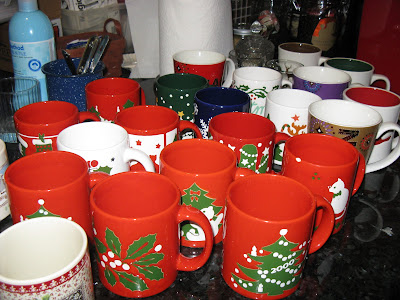 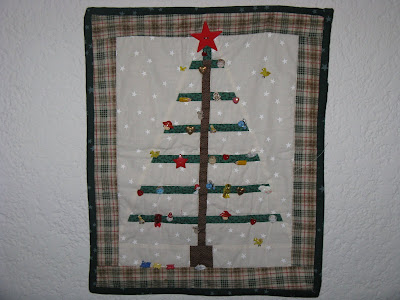 ...and walls, and every other surface that will allow it! Not much done so far, but here's the beginning:


The Great Wall of Rubbermaid has been reconstructed! This is 6 trips from the storage unit; doesn't include the trees, which are currently out on the front porch, or some of the Village houses, but you can get the general idea. Yes, there is such a thing as excess.

Although I don't think Susan would think I'm excessive!

Christmas mugs are fun. Yes, there are a lot of these; I probably won't be keeping every one of them, because I have others that I like better. But they will definitely have to go to good homes.

Then there's the feather-tree quilts. I made these little guys many many years ago; they are trimmed with buttons, many of which came from my mother's button box. Yes, there are two; they look very similar, but one is more muted colors and has more vintage buttons. The other has a brighter red and more of the "new" buttons I've collected over the years.

There are pictures of both of them on my Flickr page if you want to compare.

I have a couple more Christmassy quilts, which are still among the "missing." I can't tell if they are in the Great Wall or not, but it doesn't look like it. I'm sure they are here somewhere, because they were out last year.

More updates as we make more progress. The manger scene has now been set up; the Baby Jesus is hidden away (he comes out at midnight on Christmas Eve) and the Wise Guys have started their trek, although right now they are on the mantel, clear across the room. (They will arrive on Epiphany, unless we just can't stand it any longer!)
Posted by mehitabel at 1:58 PM 5 comments: