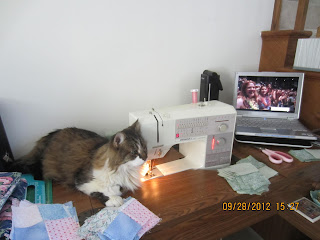 Seemed like a perfect opportunity to get some serious sewing done. Laundry going--just a few steps away from here, so I can get up and shift loads periodically. Video on the computer, just a music one that requires minimal attention (okay, okay, it's a Jimmy Buffett concert video, now you know!). Four-patches in two varieties ready to sew together into strips--all the pieces for this quilt were cut a few years ago, so it requires little now in the way of mind power. You can't see my glass of ice water--it has a lid and a straw.

But there's an extra added attraction, a cute little helper. If a cat who weighs over 15 lbs can be called "little" that is. Cute, yes, and definitely in Velcro Kitty mode since I was rude enough to go away and leave him. (My cat sitter spends half an hour a day brushing him, and they watch TV together. Rough life!)

But he does like to be where the action is! 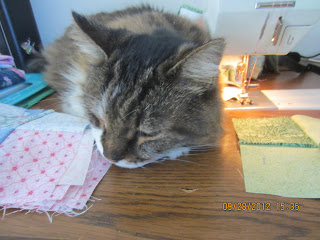 You can see there's a lot of action going on here. He's doing his best to keep those blocks from running away. Also to keep me from taking them away from him.

I got up to shift some laundry and came back to this: 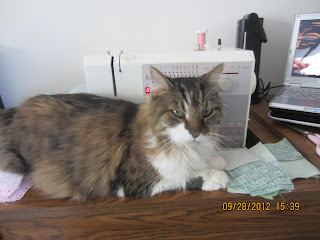 "You aren't planning on moving me any time soon." I thought this picture was so cute, I used it for my Photo A Day posting. (See my photo blog or Facebook or Flickr for the whole set--I've really actually been able to do one a day!)

Well, I did manage to convince  him to move, but not far. And he sulked. 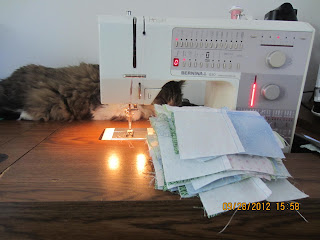 Look at this poor, pathetic, abused kitten. At least he's got a good place from which to supervise. If he doesn't get too sleepy... 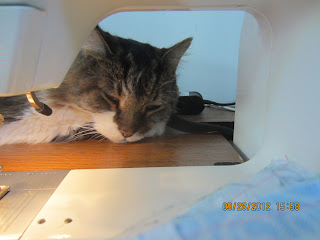 Ah yes. Sleepy cat eventually turns himself upside down. That paw is perilously close to the moving parts of the machine, but he seems to understand that a needle is a good thing to stay away from. After all, this is a pretty powerful machine! 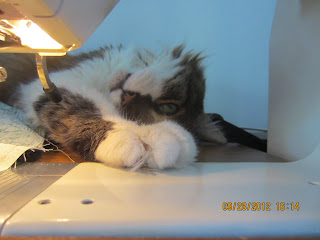 It's just all too much. Borr-ring. Just squares of material coming through...the urge to nap is overwhelming! 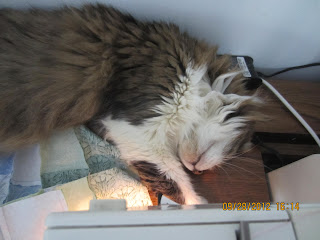 View from the top--upside down and curled happily on my piecing! I did eventually get all the 4-patches sewn together, into 4 long strips, and one strip has its bordering strips attached. Pictures when it begins to look like something! 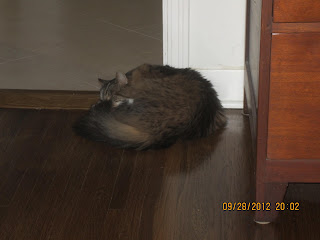 End of the day--"cat meat loaf" time. Worn out from all his efforts! He's in the doorway between the computer room and the "mud room"--the hallway to the back bathroom, back room, and outdoors. He can guard a whole lot of area from here.