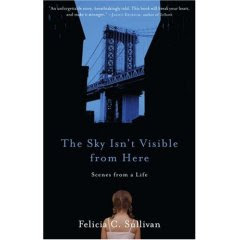 I've just finished reading Felicia C. Sullivan's The Sky Isn't Visible from Here, Scenes from a Life. It's a book that I can imagine re-reading, because it was like sitting down with a good friend and letting the talk and ideas flow. It's not a straightforward memoir--you know the kind. The ones that start with "I was born... where I grew up... vignettes from my childhood... yadda yadda." I don't mind reading that kind of memoir, mind you; but I found this much more enjoyable, as a format.

It's no surprise to anyone who knows me that one of my favorite things to do is to sit with a friend (or two or more), a cup of coffee, and some good talk. That's exactly the feeling this book gave me--a series of chats where you gradually learn more and more about each other's lives.

And what a life Felicia has had! Living with a mother who was by turns overprotective and neglectful, with a series of men who were in and out of her life--some attentive, some abusive--Felicia watched her mother go down the spiral of drugs and alcohol. Ashamed of her mother, embarassed by her home life, she tried always to be the "good" girl and learned to protect herself by assuming the manners and lifestyle of the friends who seemed to have the "good" life she so desperately wanted.

But she couldn't keep it up for long, and the stress of trying to maintain the facade made her escape into drugs and drinking almost a foregone conclusion. She wanted so desperately to fit in, to be a different kind of person, and one way to get there was to find friends who would accept her. Didn't matter if they were "coke friends" or drinking buddies--what mattered was being accepted.

As she spiraled downward, she was able to catch herself and work her way back up toward self-acceptance, embracing her past with all its imperfections and horrors and misery, putting her journey down on paper as a way of coming to terms with it. Her writing style is very personal, very intimate, very revealing. She uses the immediacy of the present tense to good effect, making the readers feel as though they are a part of the vignette she's relating, watching the action and yet observing from an interior vantage point. This kind of manipulation of time works well in this context, providing a "now" experience that is lively and active rather than a passive narration.

There were several times while reading this book that I flashed back to episodes of my own life, both as a daughter and as a mother, drawing comparisons and making analogies. To me, this is part of the value of a book like this one, in that it helps one to put one's own life into the context of other lives and other people's experiences. I've had real-life friends who have lived through horrors and traumas, and after reading this book I feel as if Felicia is another one of them.
You can find this book here at Amazon, or at your local independent bookstore. You can also check on Booksense.com if you aren't sure where your local independent is. I love the convenience of online shopping as much--actually, ET probably loves it even more than I do--but I also know that there's no substitute for the "real thing" and that means buying local whenever possible. You can also check out the author's blog here.

Okay, off my soapbox now. I hope you've been inspired to at least look for this book and give it a try. You won't be sorry!
Posted by mehitabel at 9:26 AM 2 comments:

Or, if I'm not already, I soon will be! I've just put something into motion that has been on the longtime wish list, and while I'm having second and third thoughts about it, I'm going to go ahead with it.

Last night, D4 and I had a meeting with a remodeling contractor, to discuss the restoration of this house. We're going to start ASAP, as in meeting Monday night with the contractor and the job foremen and going ahead full bore.

I was going to post some "before" pictures but I've chickened out for now. I will take some, though, and show the world what I'm dealing with here. I have to admit to being a bit of a packrat--as if my stash-flashing hadn't already proven that!--although not totally down that path. I mean, there is a lot of stuff in this house. A LOT of stuff! But you can walk through the house without having to turn sideways; there aren't big piles of paper and trash everywhere. It's just that there's a lot of stuff. After 37 years in one place, things kind of accumulate.

Plus I tend to have the kind of obsessions that require a great deal in the way of supplies: knitting, and quilting, for example. Knitting doesn't require much equipment, thank goodness, but the quilting is a little different. Gotta have a sewing machine. Which has to have a place to live. And its own travel case. There are rulers and cutting mats and books and patterns and...

Anyway, over the years, there have always been other things to do with the time and money available, and other needs that took precedence over the house. Deferred maintenance, we used to call it when I was in the real estate biz. My mantra has always been that people are more important than things, so faced with the prospect of painting a room or spending a weekend doing things with the kids, well, no contest. Ditto when my husband was ill. But now, it's all about to change.

This is an old house. As in, built in 1921. Got a lot of character--Bachelder tile in the fireplace, interesting lines. The ceilings in the older part of the house are all curved into the walls; the living room ceiling is arched and high, and there's an archway to the dining room. Outside, there are high peaks to the roof and clipped gables--we made sure, when we added on, that the roofline of the new part echoed the roofline of the old part.

Now we're going to rewire the house (bye-bye, knob-and-tube wires!) and upgrade the electrical service (no more flipping a switch to turn on a light and having the bulb go "pop"); paint the outside and inside both; remove the carpeting and refinish the hardwood floors underneath. Oh, yeah, and remodel the kitchen, too. I am hoping that the guys will let me swing the sledgehammer for the kitchen demolition--something I've wanted to do for 37 years!

I figure if nothing else, this will provide lots of good blog fodder. I'm ready to part with a lot of the "stuff" and really, my major worry at this point is how my cats will handle all this upheaval. I think in the end there will be a much better environment for all of us--including the grandbabies and the furry ones--so it will be worth it.

Knitting is going to be my sanity, I have a feeling. Going to work on some of my Mission Possible 2008 projects--less stress than trying to do anything new! There's also going to be lots of Audrey-time as I take on my new "job" this week. She's such a cutie--we're going to have fun.

Hmmm. Wonder how Audrey will enjoy bossing the contractors around?? Ought to be interesting!
Posted by mehitabel at 9:04 AM 7 comments: