...and I don't mean the Disneyland version, although I must say I am looking forward to taking these two on it! (All together now... can you get the song out of your head? Can you say earworm??) 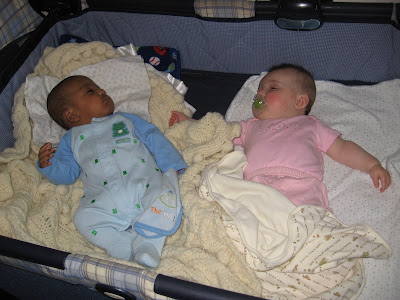 Actually I had a surprise of the "very small world" variety today. As I may or may not have said, we're having the house remodeled. I found the contractor via a newspaper ad, which I followed up online and checked out all the licensing information with the state before I ever called them.

Well, they've been working really diligently so far. Yes, there have been glitches and problems, but on the whole it's been moving along. I mean, the house was built in 1921 and it has seen a lot of experiences in that time.

Anyway, I've had several conversations with the office staff at the contractor's, as well as many visits with the man himself. Today, one of his assistants called me. Seems that something came up yesterday when she was talking to him, and she mentioned that her father had worked for "Giant Wine Co." for many years. Contractor mentioned that he knew my husband had worked for the same company. She immediately recognized the name--her father was my husband's boss and friend for many many years. I mean, we went to her wedding. Her dad was responsible for Bob and I getting our first house many years ago--he arranged a short-term "advance on earnings" so we had a down payment. I could go on and on, but I'll spare you.

But what are the odds, in a megalopolis like Los Angeles, that this would happen?


Today was a day for cousins to get together. We had half of the Connecticut Cousins visiting, and of course the babies were among the major SoCal sights they came to see!
At one point, both of the little ones were asleep and sharing the same portable crib.

Nice when they are so teeny, huh?

For the record they are now 3 months (Nate) and 5 months (Audrey). 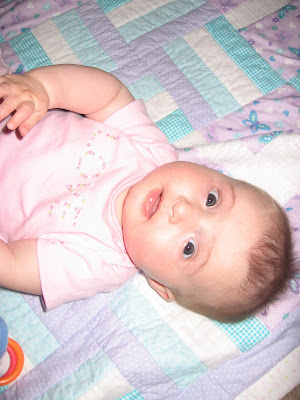 Miss A likes to play on her quilt on the floor.

She is learning to roll over which means she is no longer safe on sofas, or on any bed smaller than a queen.

It was quite warm today and the Japanese iris decided it was a good day to open. They went from tightly furled buds in the early morning to a full-blown display by afternoon. 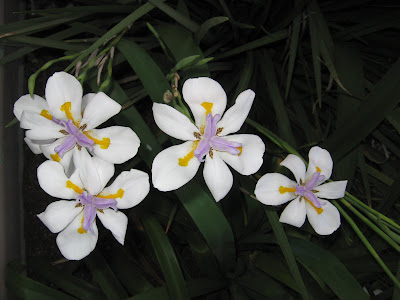 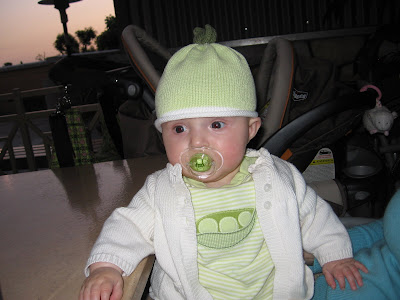 Can't see her green socks, but they are there! 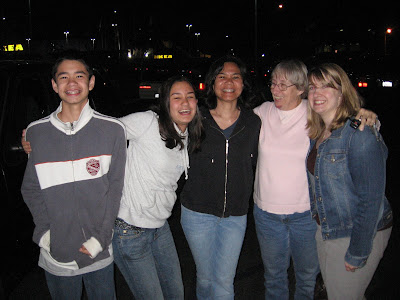 Here's a group shot of the "clan" after dinner last night. The adults are shorter than both of the kids!

Yes, I've been knitting. No pictures, though, because the latest inch on Shedir and the latest two inches on the Very Warm Hat look a lot like the last ones. One of these days!!
Posted by mehitabel at 9:14 PM 5 comments: 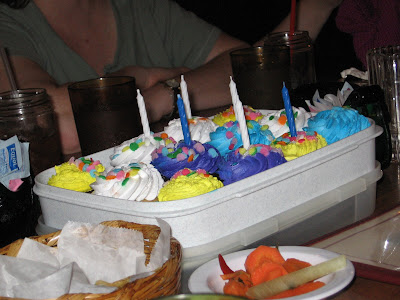 When the temperature outside is frightful--as in, 103 degree readings, and it's only April--there has to be a way of making the best of it.

So a knitters' gathering and mini yarn crawl is one of the better ways! A group of us got together on Saturday to have lunch and visit some notable sites and sights on the West Side. Ellen calls us the Eastside Goils, which is as good a name as any for us! She took lots of pictures and they are on her blog. I didn't get as many as I would have liked, and they are not great, so I'm only going to show you one--the cupcakes!
Because after all, Ravelry is celebrating Bobmas, and cupcakes have been designated the Official Holiday Food of Bobmas.
If you aren't a Raveler yet, what are you waiting for?

After the yarn crawl, there was a gathering of a different sort. 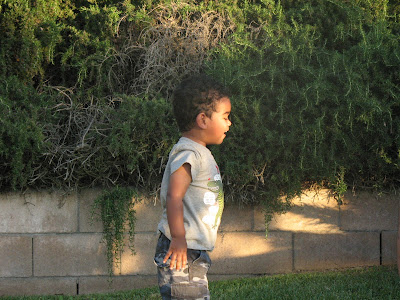 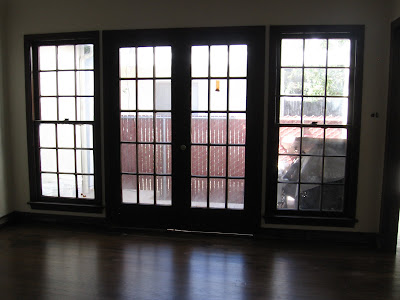 This one involved babies. Big ones... like the Grandcarrot... and little ones. Big brother was wearing his Dodgers shirt, cause there are some major Dodgers fans in the family. Little brother was wearing his BoSox onesie, because there are also some major Sox fans in the family.
Some of them are the same people! It's quite handy that the Dodgers and the Sox play in different leagues. We think a Dodgers/Red Sox World Series would be great fun.

I'm having some problems realigning these pictures in today's post, so I'm going to skip around and let you see them in whatever order they came up in, ok? My time is sorta at the disposal of one Little Miss A, who has been having a bit of a fuss today. The picture just above is the wall of windows in my dining room--now visible due to a lack of stuff piled in front of them, and reflected nicely in the newly refinished hardwood floor. 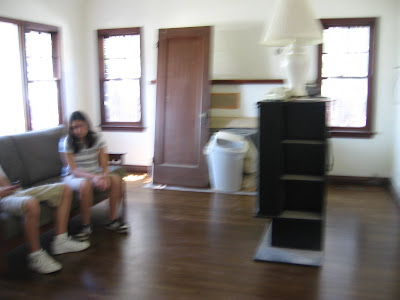 Looking from the front door through to the back of the house, you can see the dining room and the doorway to the guest room (the door that belongs in that doorway is the one that's leaning against the fireplace in the blurry photo) and the kitchen. 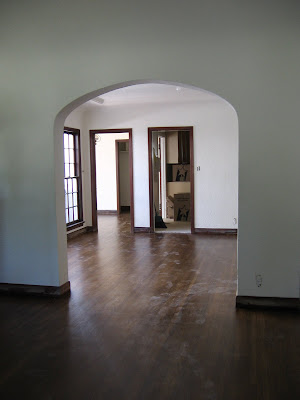 The dusty footprints belong to the workers, and are the clue that it was going to be okay to walk on the floor!


Miss A in her sunhat and sundress. She'll be 5 months old on Tuesday--already! 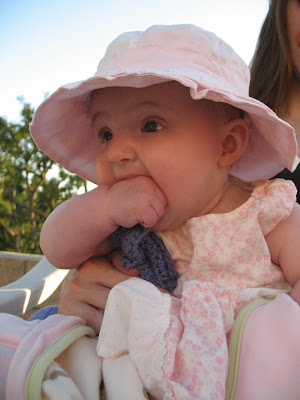 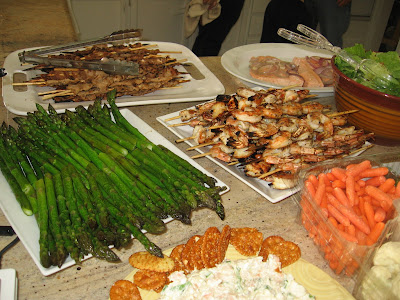 Some of the food. We had what D3 was calling a real Filipino barbecue, meaning that there was a lot of food (she said she estimated everyone's portion at around 4 lbs. per) and lots of it had an ethnic flavor.

For instance, the marinated pork sticks (mmm mmm good) are a secret family recipe from my daughter-in-law's family. The marinated shrimp is a variation.

Fruit. Yum.
Too bad I couldn't get a shot of this before the vultures descended. 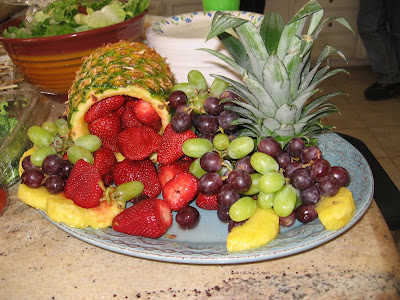 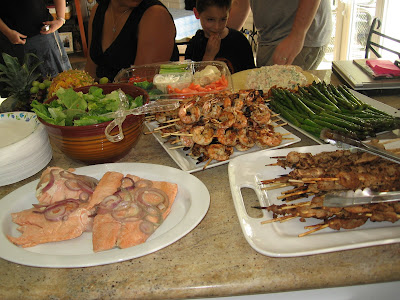 Salmon: also good on the BBQ! 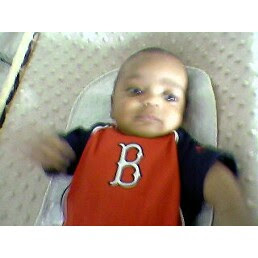 Little Nate, ready for the game!

One of the new projects in D3's area is something called Big League Dreams. The gang (which included all the aforementioned baseball fanatics) checked it out and then went back last night for a game. The park features replicas of famous baseball stadiums and apparently last night, Jose Canseco was there and autographing baseballs!
Today the Easterners are off to San Diego for a few days with their "other" grandparents. Good way to spend their spring break!
Posted by mehitabel at 12:20 PM 5 comments: