Whoops, time to back up. All the way up, to the packing stage: 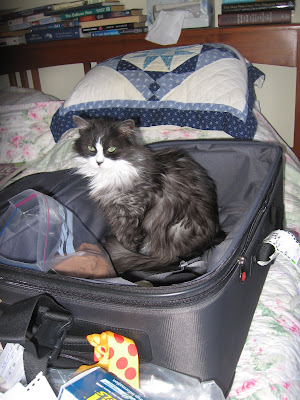 Take me along this time??

The boycat has a good idea of what should be the first item in the suitcase--him! 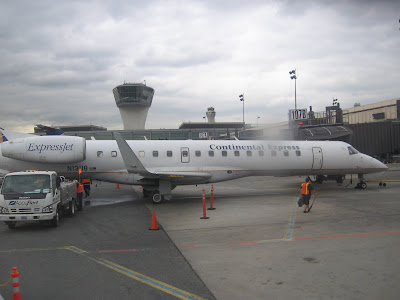 Actually, I don't mind the little Embraer 145 jets--they are pretty comfortable! They have less than 50 seats; one side is a row of single seats, the other side is two. And the seats are comfy and cushy, and there's enough leg room.

How come they can't do this on the big jets, where your flight lasts more than 28 minutes?

Oh, and why do they cancel flights? I was not a happy camper, having to wait in the airport for almost 6 hours for a short flight. I could have driven there faster! (Except that I was so tired and groggy that I couldn't even knit. Bummer, huh? Hours of quality knitting time, and the body won't cooperate!)

A good night's sleep, a little sleeping-in, allowing for the 3-hours-earlier time change, and I was up for a road trip. 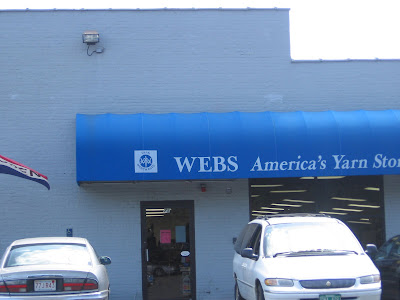 Yeah, I was here. 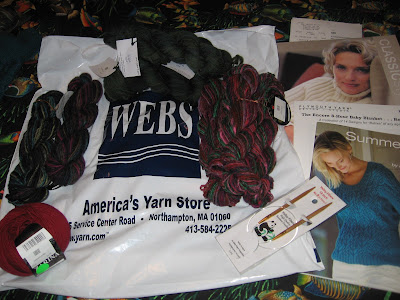 After all, it's just up the interstate from my dad's residence (more on that in last year's June posts, if you want to know!).
So here's my haul. I really didn't plan to buy anything.

I guess ET came along, huh?

I shouldnote that the colors are much truer--at least on the laptop's monitor--in this group photo than in the individual shots. The flash tended to wash out the colors. 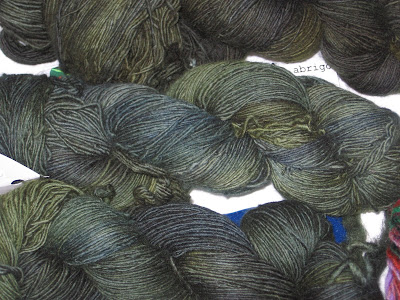 Some Malabrigo Laceweight, for the Mystery Stole 3 KAL. The color is called "Vaa" and it's a deep dark rich navy/deep green combo. Of course, I also fell in love with Zarina... it's the solo ball of red up there in the group shot, bought it to do some swatching. It's probably a little too heavy for the lace stole, but it feels really yummy.


Then there's the Noro.

Enough of two colorways to make a couple of chevron scarves. I need a mindless kind of project, for the car and for visits to the Male Parent. (Family joke. My brother refers to our father as "your MP" and I refer to him as "your MP." I didn't say it was a funny joke, just a family one. You'd have to know the family.)

Anyway, it's part cashmere and all nice and soft and yummy.

I had uploaded other pictures but the laptop isn't playing nice with them, so I'll have to try again later.

Next report will be about Road Trip #2 which is planned for tomorrow...

Meredith posted this contest on her blog, which I found via Knit Devil's charming little fantasy. In a nutshell, the challenge is to write about the three yarns that you'd want if you were going to be stranded on a desert island for a long long time. Herewith follows mine:

First of all, my desert island would be in the cold latitudes--maybe one of the Shetland Islands, or the Faroes, where the people have all gone but have left their old stone houses and crofts behind. That way, I can have a cozy house with a big ol' fireplace to sit and knit by on the long wintery evenings when the winds bluster and blow. That way, I could knit all kinds of thick cabled sweaters and complex Fair Isles, and wear them too!

So the first yarn I'd want to take would be a nice thick aran yarn, a creamy white Blue Faced Leicester. I have some of this yarn and it's just so wonderful to take it out and pet it and imagine it turning into one or more of those great cabled sweaters, like Alice Starmore's Inishmaan and Inishmore. Could I also have a couple of BFL sheep for company and to provide spinning material?

Next, I would want to have a nice selection of either Jamieson's or Jamieson & Smith's shetland yarns, to be able to do lots and lots of colorwork. If I can't have a case of assorted colors, I will just have to take white and dye the colors with the natural plant dyes and other materials on the island. Hey, a stranded-on-the-island girl has to be resourceful, right?

Lastly, lots and lots of Kid Silk Haze. Enough to make allthe shawls in Victorian Lace Today, and as a bonus, could I have the book too? Once I've run through all the patterns in the book (it is a LOOOONGGG time, right?) I'll start designing my own. But the main thing is the KSH. It's the best, soft, silky, strong. And a little ball goes a longlong way, too. Petting KSH is one of my very most favorite things to do. I think one reason I haven't been able to finish Birch is that I spend more time petting the yarn than knitting the shawl!

As far as other accoutrements for my island, well, I don't need a cabana boy to bring me drinks, but I'd love a big strong silent type who will hew wood for the fire, ride a bicycle to power the generator for the Ott-light and the computer, and cook good meals to keep us both healthy and strong.Hey, wielding those pointy sticks takes lots of energy!
Posted by mehitabel at 2:47 PM 5 comments: 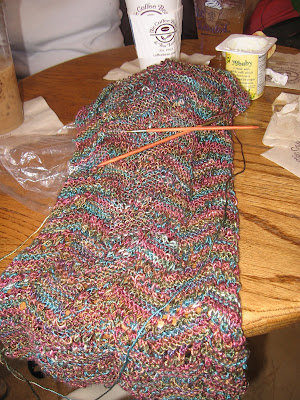 Update on the Paris Scarf. It's still traveling, even though today it was "only" to Montrose. It's growing, and it has survived yet another "meltdown moment."
Word to the wise: don't try to knit with silk (sea or otherwise) when you're a passenger on the Pasadena Freeway. It's the original thrill ride, twists, turns, swerves, hills, dips, and the scariest part? It's all for real! One of those twists knocked several stitches off the needle, whereupon they immediately began to ravel downwards.
Yes, the eagle-eyed knitterati were able to find the "bad" spot. But I doubt it will affect the wearability of the piece overall, once it's all done and blocked. 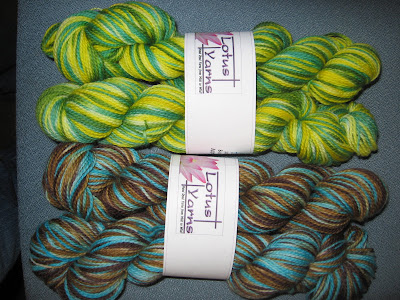 ET has been busy.
Never ever trust your ET when you've been away from yarn and fiber for a while, even when you've been having a wonderful time.
ET was feeling very deprived apparently, because look what showed up in my mailbox!
Oh well. Lovely colors, nice soft yarn... ET does have good taste, I'll give her that! 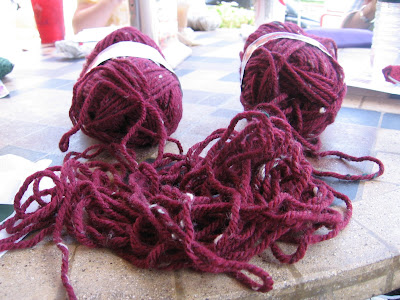 For some reason, both of these skeins of yarn decided that I needed to hassle with yarn guts instead of just smoothly knitting away on the CPH.
The sleeves are nearly done, though, so at least it was a productive day.
In one sense.
In another sense, it was a very bad, truly awful day. Some time during this idyllic knitting session-- 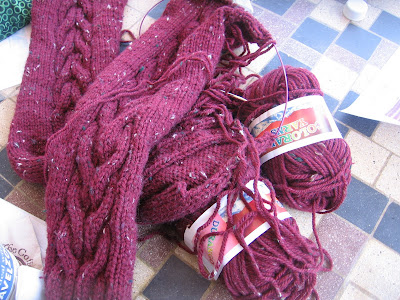 I mean, knitting outdoors with soft breezes? Even when they were strong enough to knock over a glass of iced tea, or blow a ball of yarn halfway across the patio?
Still, it was a nice day for knitting. Till I realized that my cell phone was missing. A quick call to the number and my worse fears were confirmed: the phone had been turned off, meaning the thief knew that the rightful owner was nearby--or worse, knew who the rightful owner was and just wanted to get away.
Trying to report a lost cell phone, when you've lost your cell phone, is an exercise in frustration. I drove to the nearest Store Where My Phone Came From, to be met with a lazy obstructionist whose line seemed to be, our computers are down, there's nothing we can do for you. Oh, I can give you a number to call. Ummmm--on what? My cell phone is gone! On your home phone? Oh yeah--the one the squirrels have eaten all the wiring to. Besides, how do I get a new phone and get it activated?
He eventually condescended to let me dial Customer Service from one of their demo phones, and then vanished. Almost a half hour later--apparently it was a busy day in Phone Hell--I got what is probably the dumbest CS rep in existence. Took me a while to convince him that no, I didn't want to upgrade my service--I wanted to report a stolen phone! Sigh. I could go on and on. And will, with the slightest encouragement. Suffice to say that once we got a (different, and relatively intelligent and efficient) store rep involved, I was able to get a new phone--full price, of course--and get it activated. First, he activated my new phone with some random phone number--heaven only knows where it came from, it sure wasn't mine--then it took several tries to get that erased. Then he activated my number on the store's demo phone. Sigh. I finally left the place, two hours later and a whole lot poorer (and several years older) with my new phone. It's not nearly as nice or as much fun as my old one, but it's mine. And it works. And it has none of my contacts in it, which is a major bummer.
I just hope that whoever has my lovely red phone doesn't decide to crank-call all my friends and relatives. That would really make me angry. Actually, if I could get my hands on the guy, I'd run him through with my KP Options. Pointy sticks make good weaponry! 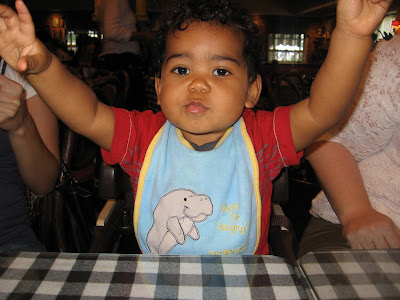 Recognize this? Well, I wouldn't expect you to unless you're living in or have been to Southern California. 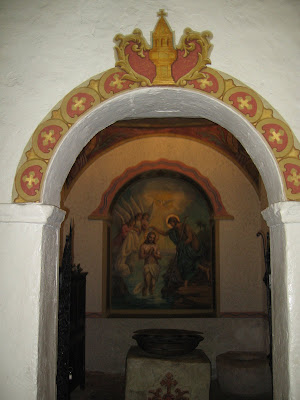 This is the baptistry at the San Gabriel Mission. It's had some restoration work, but in the main it's pretty much the same as it was in 1771. 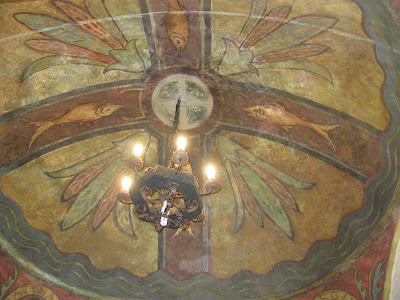 Looking up at the top of the dome, this is what you see. I'm sure in the 1700's or so the candelabra was lit by actual candles, but nowadays it's light bulbs. Bare bulbs like this were quite a style statement in the late 1800's--early 1900's when electric light was brand new. 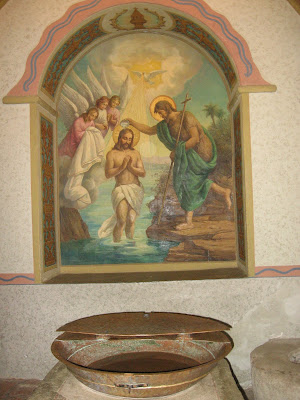 Inside the baptistry, you'll find the original hammered copper font, and a painting that has definitely been restored more than once. 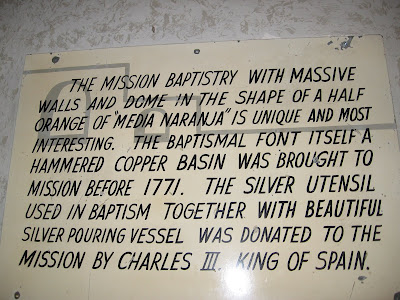 In case you wanted more details about it, there's a plaque at the side of the entrance explaining all the details. 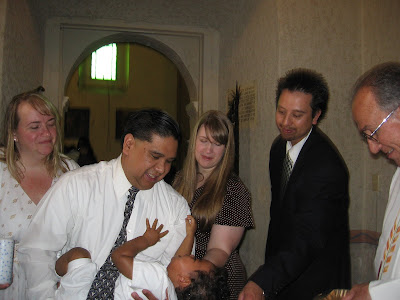 This is where all my kids were baptized, and now the latest in the line: the grand-carrot, oblivious of the history, family and otherwise, did not enjoy this part. However, it was all over soon and he was able to dry off and return to his nap. Celebrations followed, of course, including lots of yummy food.
Want to see pictures? Of course you do! (If you don't, then you can stop reading here.) 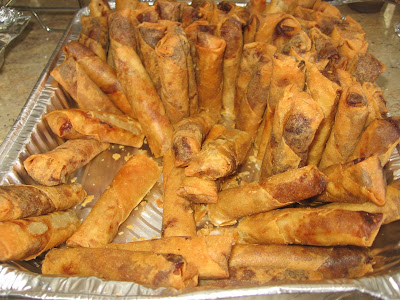 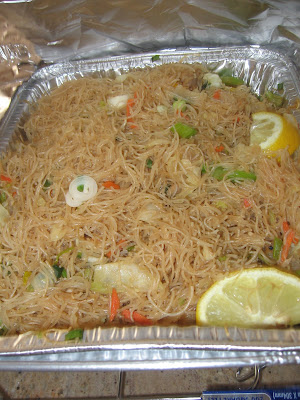 Pancit noodles.
Lechon and adobo chicken.
Veggies with sauce and quail eggs.
Yes, there was a definite Filipino flair to the food! 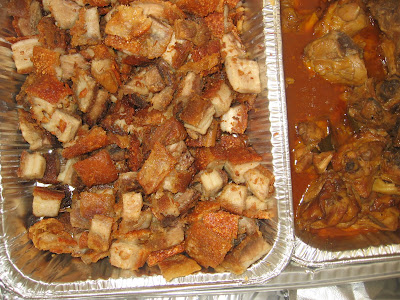 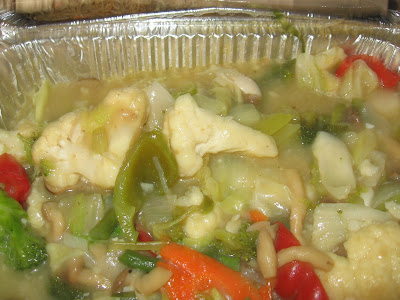 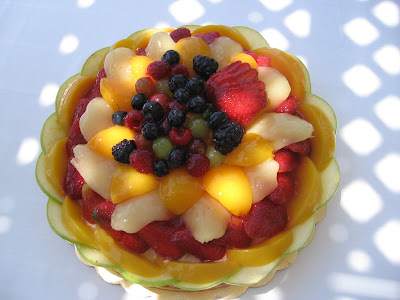 Finishing touch: fruit tart. This came from a Cuban bakery, as did the cake. Mmmm.
Tomorrow there may actually be knitting content. I have some new yarn, and I'm going to try to work on CPH some more and take pics of "where it's at," and then I'll even tell you about my newest crazy-making project.
Too bad there wasn't any of that fruit tart left over!
Posted by mehitabel at 10:21 PM 3 comments: