Catching up on the last few weeks of quilting activity! I believe when I last left off I was working on the Quiltville Mystery Quilt, Grand Illusion.

Well, some of my quilting friends decided against doing that one because it had 280 half-square triangles in the first clue.

So they picked out another one--whose first clue included over 1000 squares cut at 1.5'. Oh yes, much much better.

Not. And I wasn't going to do that one, no way. By the way, you can find Flowers in My Windows over here.

But then I got caught up on the Grand Illusion clues, and (erroneously as it turned out) thought that, since clues were released on Friday, the last clue would come out on the day after New Year's Day.

Under those circumstances, of course it made sense to join in the New Year's Eve Mystery Quilt too. 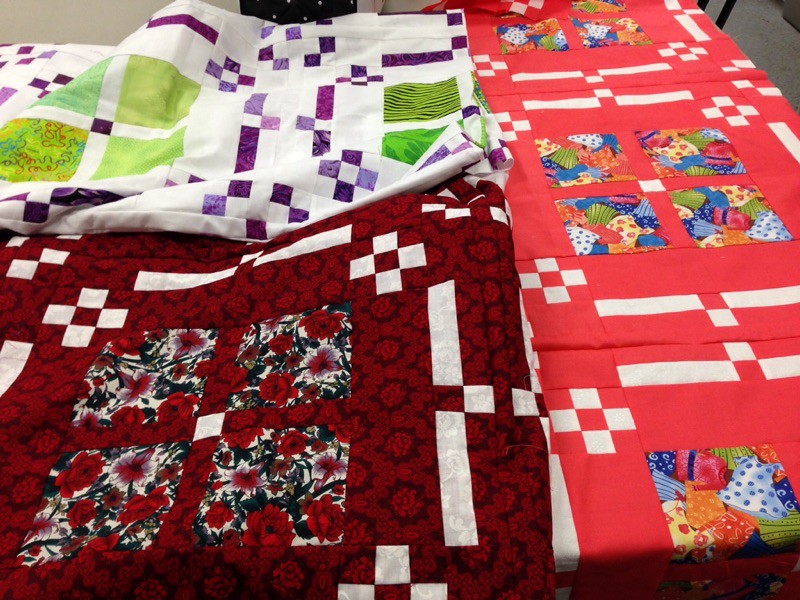 I mean, I had some great fabrics in a tub--a wonderful deep red, with a Hoffman floral and some white that all went together. A little math (danger, danger...)  and I strip-pieced the little 9 and 4 patches called for. So technically I avoided those 1000 little squares, right?

Jumping ahead a bit, here's our fraternal triplets. All the same pattern, but what a different effect from the  colors we chose! 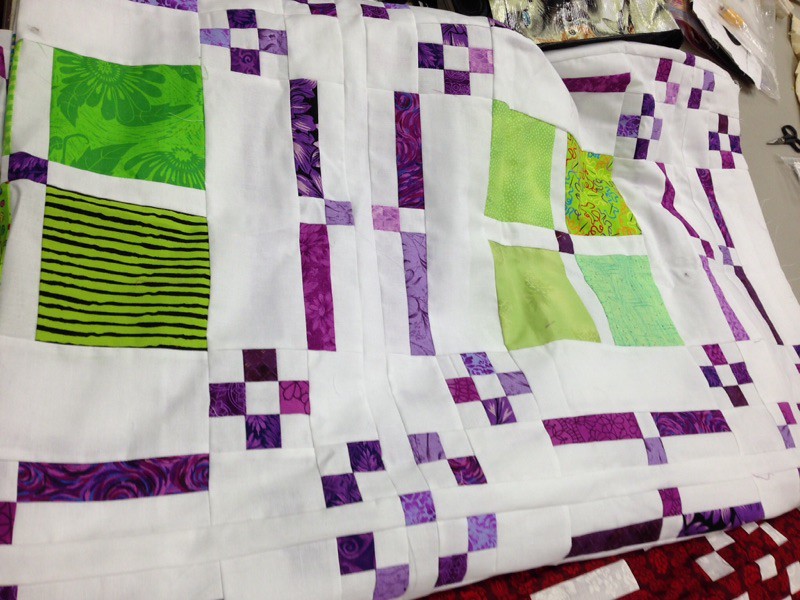 Anne picked a white background and  used scrappy purples and greens for hers.

It's light and bright and very springtime. She decided--through a series of choices that almost rivals my pinwheel saga--to make 12 blocks instead of 9. This would have been a good choice except for one thing:

she forgot that she'd need an extra row of sashing. That meant a whole lot more itty bitty 4- and 9-patches.

Fortunately, she doesn't curse. Much, anyway. 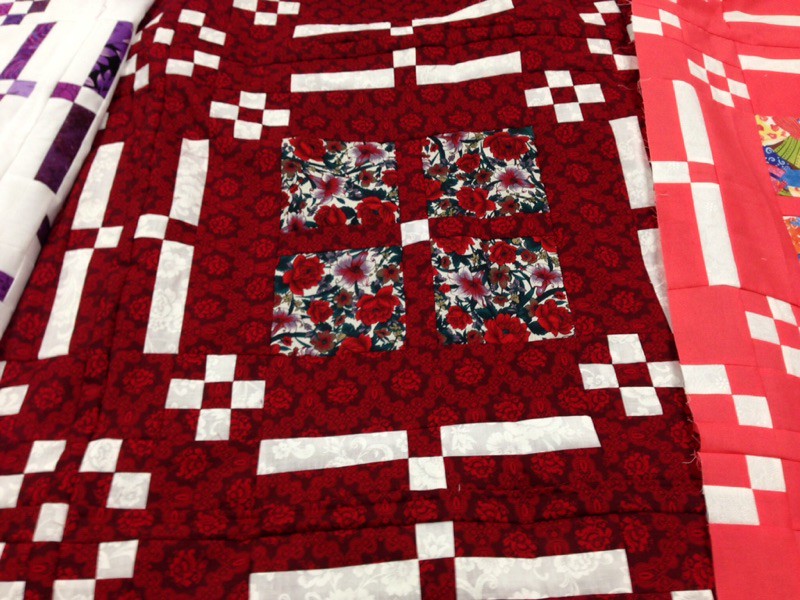 Here's a closeup of my red one. The print matches better in "real life" and the red isn't quite as burgundy as this photo.

Red is notoriously hard to photograph, especially in artifical light.

I just need to put a border around the edge and it will be ready to send off for quilting as soon as its backing gets here. I had something that would "do" but the quilt is too pretty to just slap any old back onto. 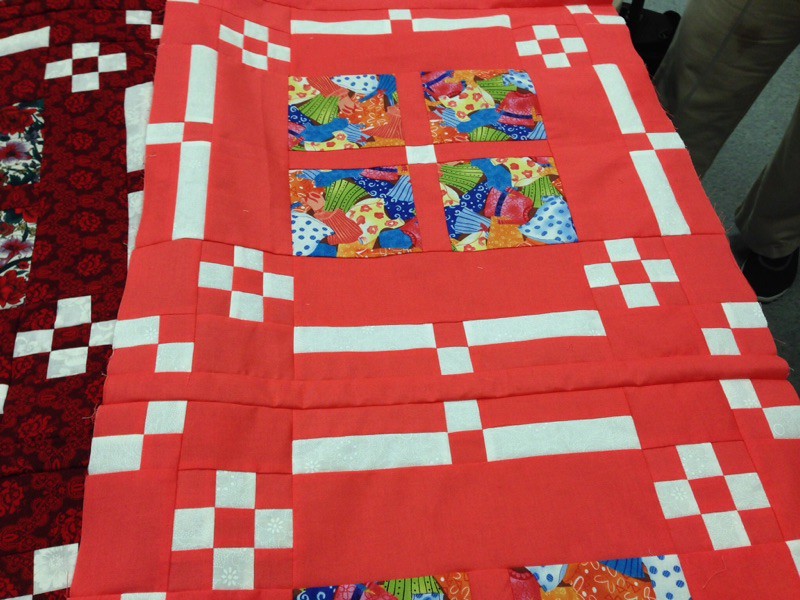 Ethel really likes orange and the brown/warm side of the color wheel. So she also raided her stash and came up with this great orange-coral-salmon color.

Her "windows" have a cute print of little dresses.

Anyway, I was glad I was able to get all three of these quilts together for a "family portrait" before they go their separate ways! 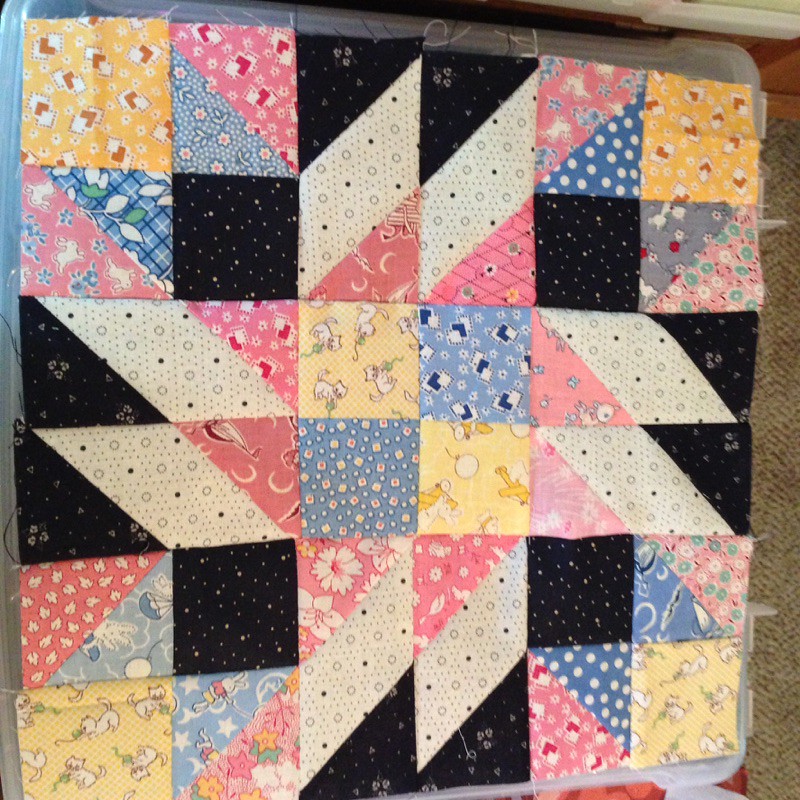 So what about the Grand Illusion, you may ask.
Well, as a matter of fact, it's coming right along.

Here's the first block (of 25) pieced and pressed. 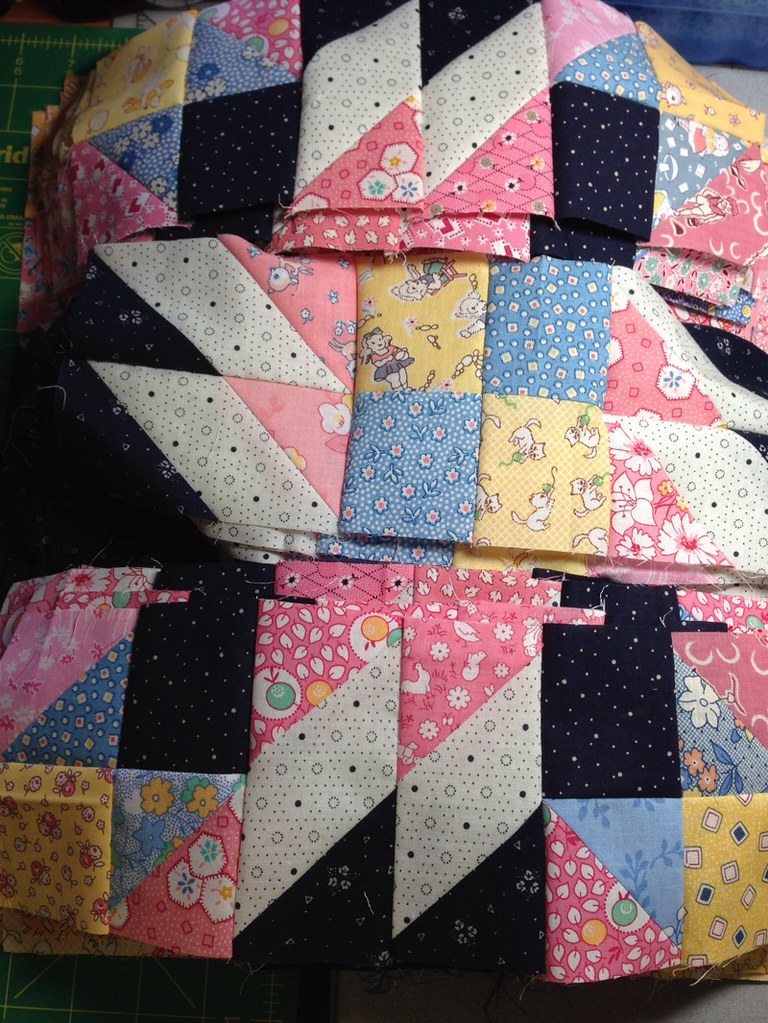 The last clue was released early, so I got to see lots of pictures of the finished blocks and even some quilts long before I expected to. I have to admit that my first reaction was to be a little disappointed. Some of the versions have a very strong buzz-saw look to them, and I'm not fond of buzz-saw looking paterns. I have the same problem with the Pineapple quilts--some of them look very angry and have lots of vicious teeth!

But, just as color choices can soften a pineapple, so can they soften this pattern. 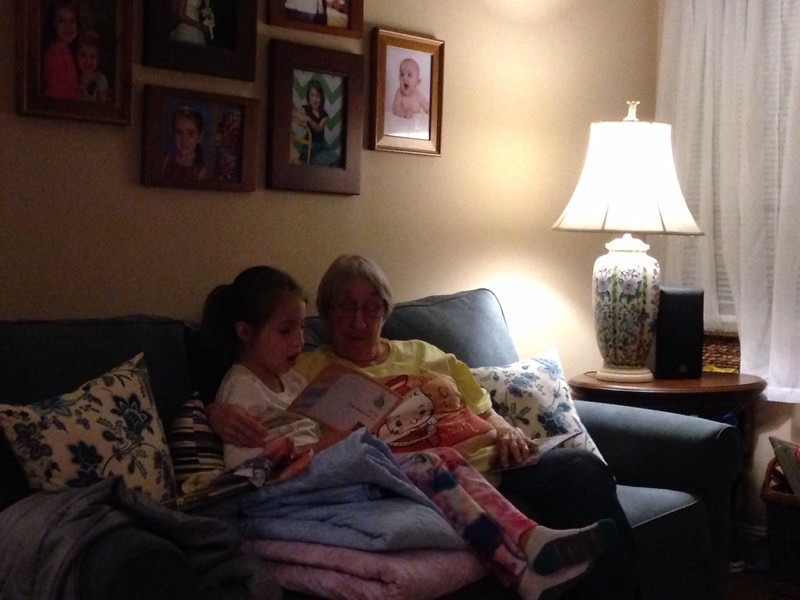 While working on the red quilt, I had time to see lots more Grand Illusions, and I began to warm up to the pattern. Now that I'm assembling it, I am even happier with my choice of colors and fabrics. The 30s prints are much softer and I like having the same white and only 2 different blacks--which are really similar anyway.

The pattern is meticulously drafted and goes together like a dream, so I would highly recommend it if you're looking for a great scrappy pattern. Bonnie Hunter is a wonderful designer and teacher!

Grand Illusion will be available on her website till June, when it will be "retired" until it comes out in a book or as a separate pattern.

I'm hoping to be able to post more progress pictures soon! However as the next two photos show, I do have something else to do sometimes.

Listening to Audrey read, and having Abby tell me about her favorite books! 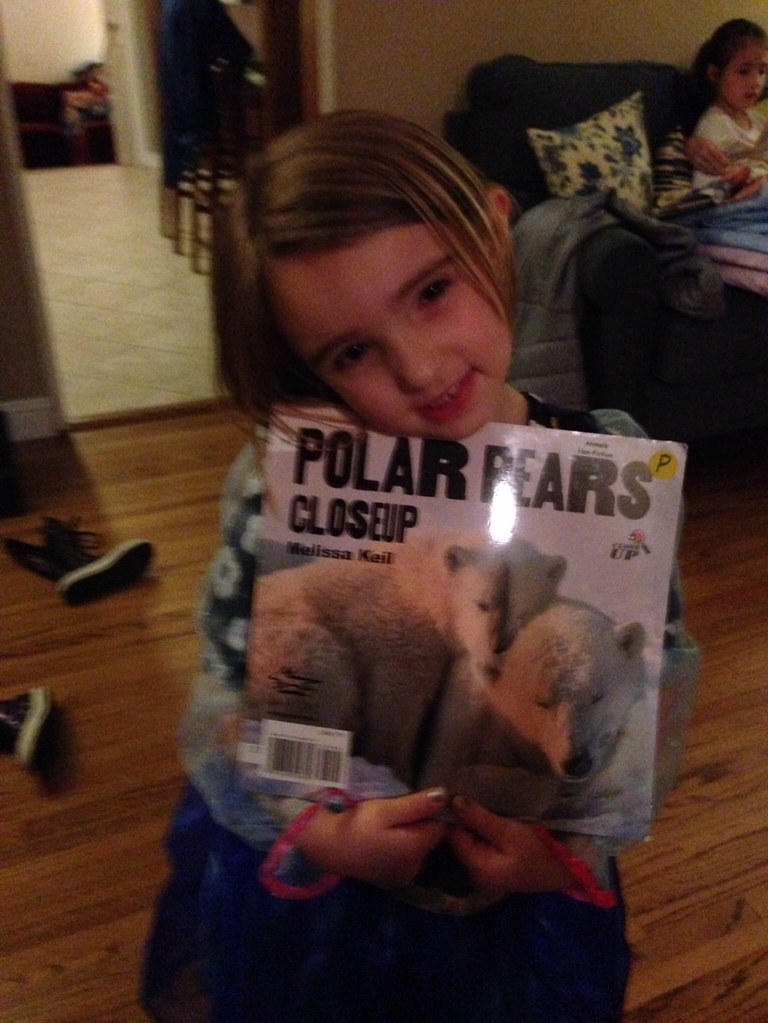 Last but certainly not least, the final four Pinwheels have come home from the quilters and are ready for their binding. The first two are headed out shortly for their new homes in Connecticut and Colorado, two places that can probably use a nice warm springy-looking quilt!
I can't believe these have gotten this far... I'm not even remembering when I started them, though I know I could look it up.
And in the meantime, Anna has found a wonderful pattern and I'm almost convinced that I need to do it too...

- Posted using BlogPress from my iPad