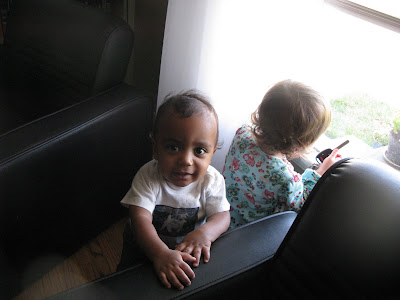 Not the best picture I've taken of the little cousins, and I'll work on getting a better one. However, as anyone who's ever had a toddler in this age bracket already knows, they are perpetual motion machines, and getting even one of them to stand still this long is a major feat.
I did get several pictures of blurs. Sigh.
Anyway, time does seem to be marching on, and March has marched its way into history. Time for some new blog resolutions, or maybe just trying to do a little better. Let's see how I do!
There are some interesting and exciting things coming up this month. First up, tomorrow morning D4 and I will be on a plane to spend 4 days with D1. While we're a Mile High, there will also be the opening of signups for the much-anticipated Mean Girls Yarn Club, on Friday. Then at the end of the month, most of the California contingent will be on a plane headed for the East for #1 Granddaughter's wedding and college graduation--talk about a busy weekend!
Oh, and Great-Grandaughter #1, aka Paige Nicole, made her appearance last week. So instead of having a "lucky 13th" grandchild, #13 turned out to be a "great" instead. Pictures are on her great-aunts' Flickr pages, since my phone has stopped accepting pictures. (Yes, I know, it's probably time for a new phone. Sigh.)
In yarny-goodness news, there's a new Yarn Club in town, and the signup frenzy will be happening on Friday April 3! The club is being organized by Laura from Dizzy Blonde Studios and Knitty Knitterton of the House of Awesome. (Did you see my Awesome yarns in previous posts? Yeah, those base yarns are sooo soft, and the colorwork is to die for.)
Club details:
I'm encouraging you all to head over there and sign up, just please please leave a spot open for me! If I don't get in, there will be some sort of major tantrum going on, probably with a triple back flounce and a touch of acid reflounce too! (Okay, that might not make sense, but if you're a Ravelry Rubbernecker, it definitely will. And if you're not, why not?)
So, that's it for March, and looking ahead to April, it looks as if it might make for interesting blogging.
Especially if I don't get into the club... because we all know I NEED MORE YARN.
Posted by mehitabel at 10:22 AM 6 comments: