Some days, it seems as though the blog has a mind of its own. At least that's what's happening with the pictures today! I hope that they'll kind of tell a cohesive story--but no guarantees! 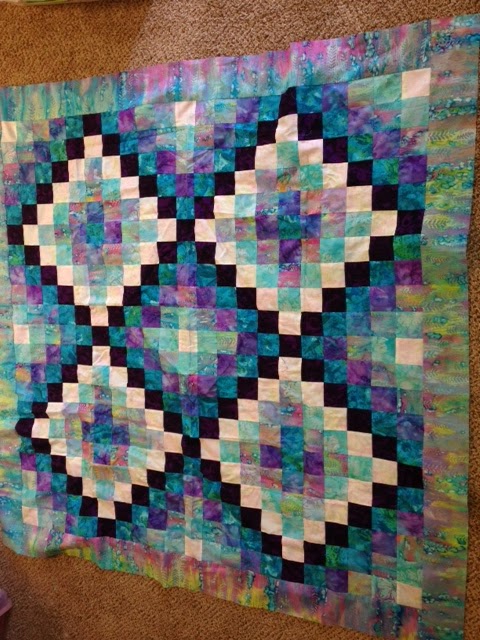 I had been noticing that there was a box in the garage with a broken lid. I'd moved it a couple of times so it wouldn't fall over and dump the contents all over the floor, but I hadn't paid too much attention to what was in it.

I could see a few squares pieced together and some plastic bags, but that was about all. So this morning, while waiting for Anne to arrive, I brought it and a couple of other boxes inside.

One was a box of bindings, mostly left over from other projects, and since I had some other pieces of binding hanging around in the sewing room, I wanted to get them all together.

Did that. Also pulled out the red floral binding for the Tumbler quilt, which is going to have a little surgery to separate it into two quilts. Long story and pictures when it happens. 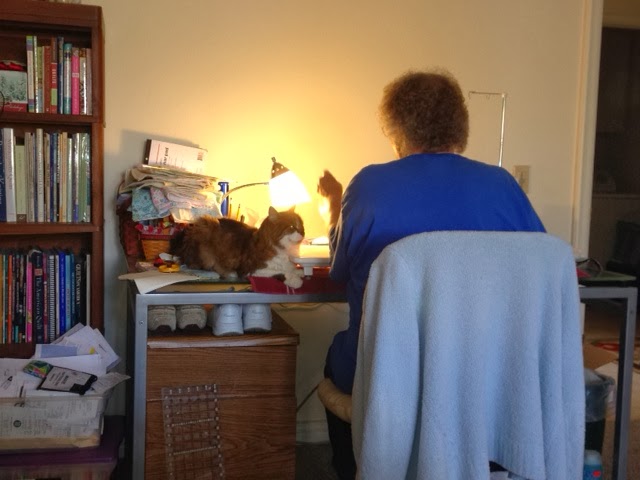 Anne came over to sew today, and had some help and supervision. No one is immune from this treatment!

I cleared off the top of my desk--which just happens to have my big cutting mat on it--so she could cut some squares and then it seemed like a good place to set up her sewing machine.

HiHi thought it was great fun having a visitor today, and spent his time supervising us both. 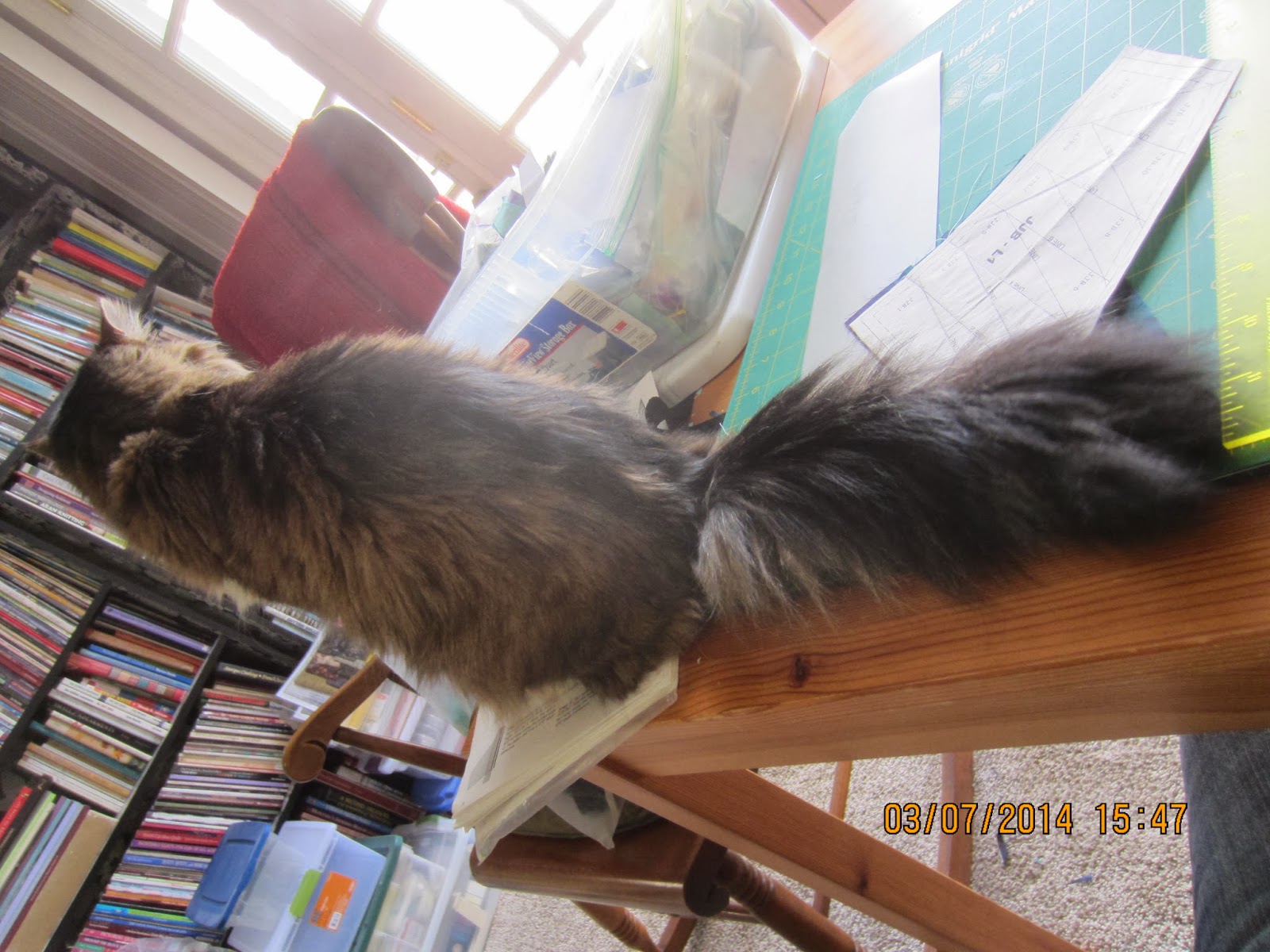 He really thinks he's a great asset to my sewing. Well, maybe not completely an asset...

Please, woman, you have one job. 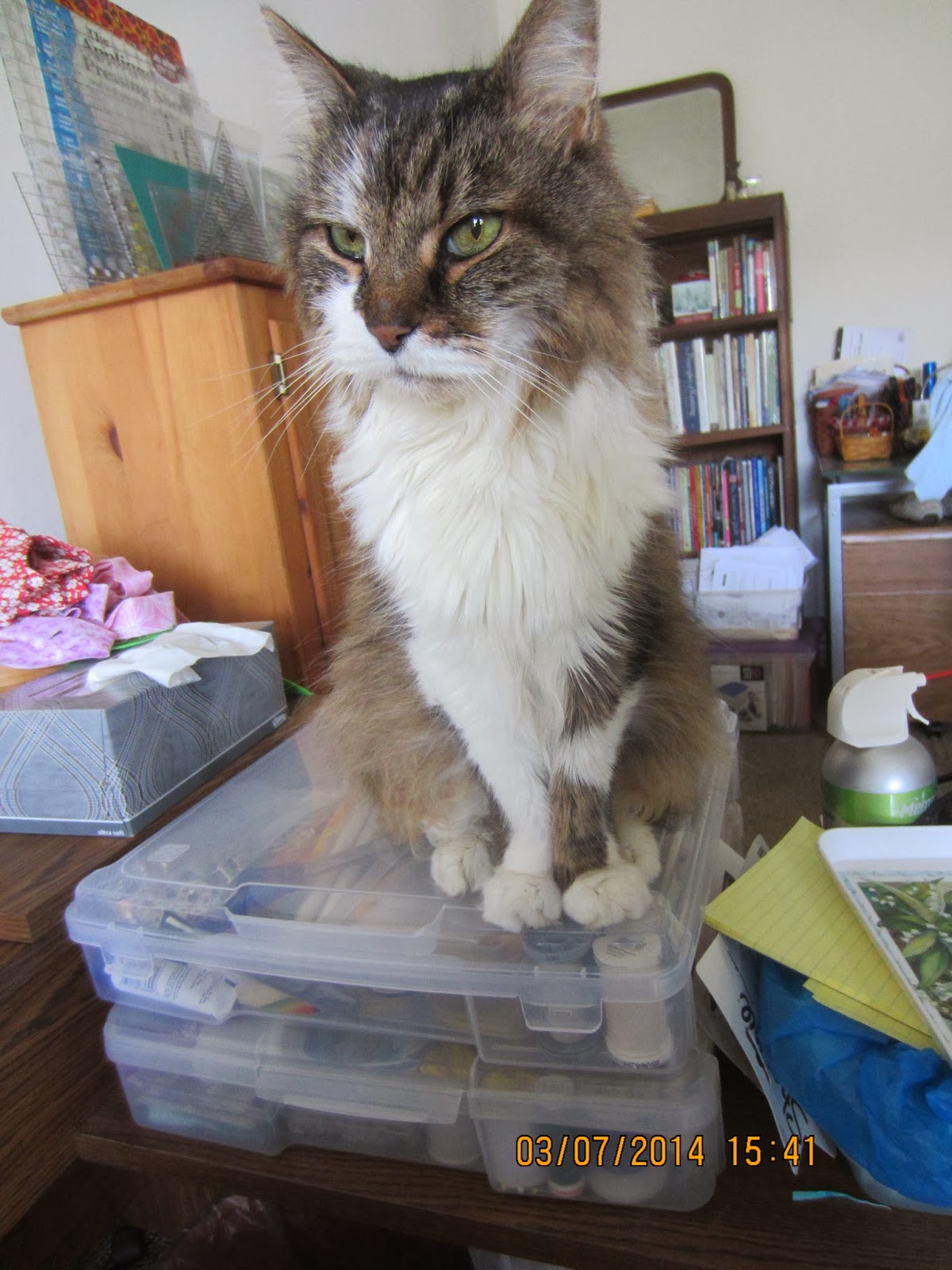 Disapproving cat disapproves of being relegated to a side table.

Okay, so back to the box. It had a most eclectic collection of random "stuff" in it.

One thing was the quilt top up at the top of this page. That picture was taken "after"-- after I'd pressed and cut the piece of fabric that was folded with it, and put it on as a border.

I know I made this top. I kind of remember doing it, and I'm also kind of thinking I did it in a workshop with Blanche Young. It's definitely one of her patterns. Anyway, it's now ready to quilt, so I guess I need to add another UFO to the sidebar. 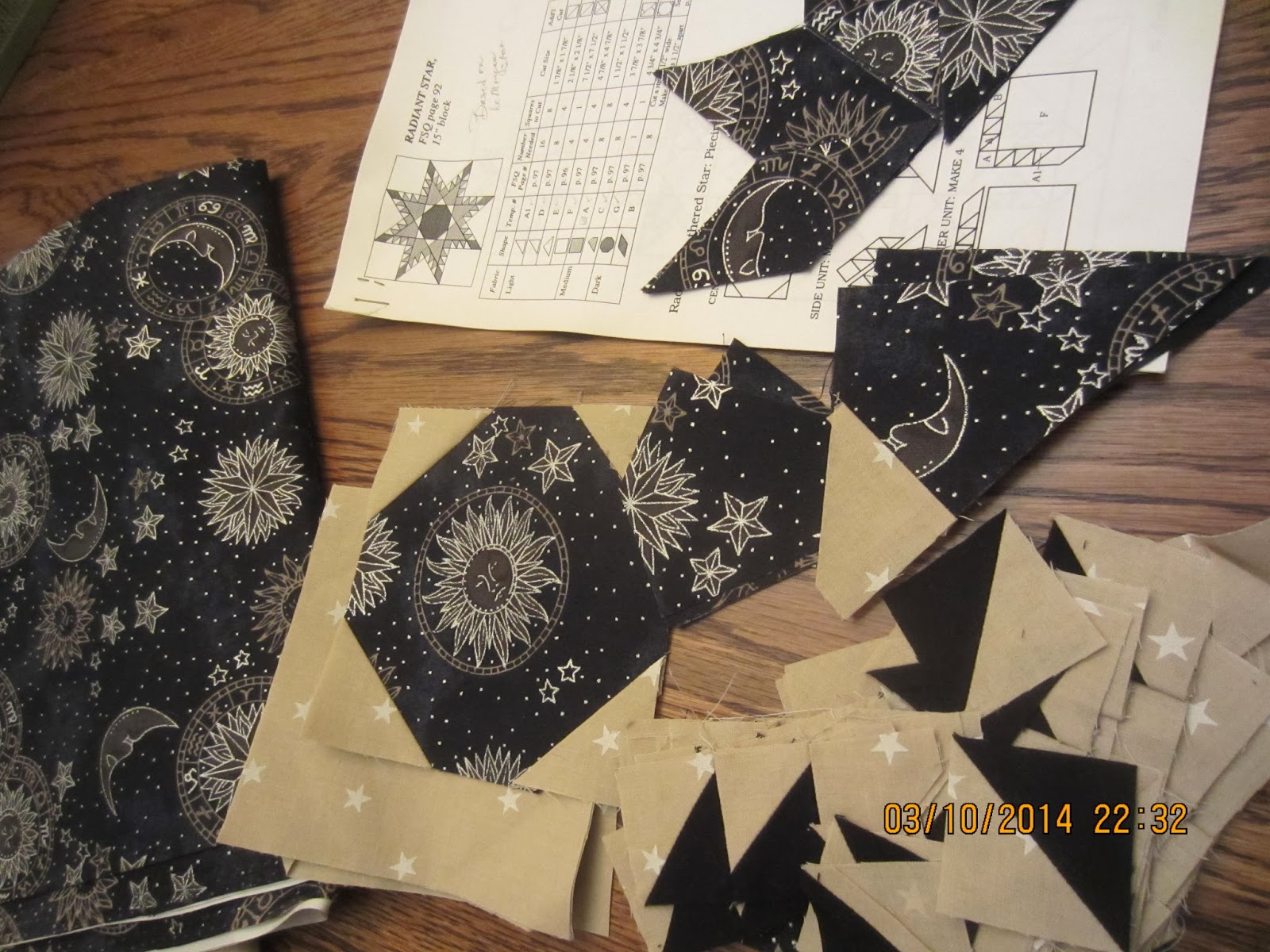 This was also in the box. I am pretty sure this was from a workshop with Marsha McCloskey at the Glendale show many years ago.

I can remember that much. Whether I did this in class, or worked on it later, I haven't got a clue. I do still like the fabrics, and I might be tempted to put this star together. 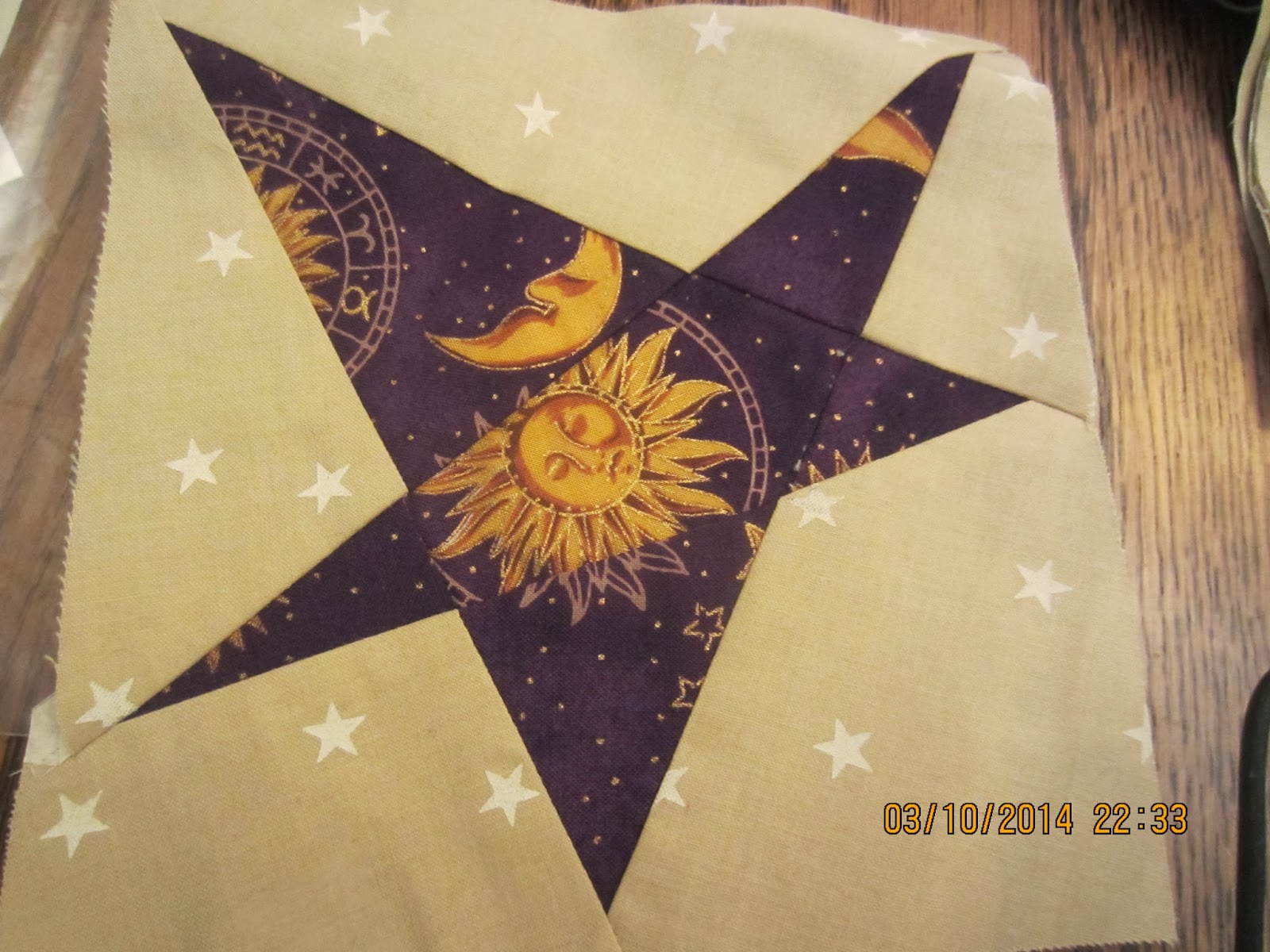 Paper-pieced star. Same background fabric as above, and probably from the same time frame. Also a different colorway of Hoffman Celestials.

I loved those fabrics and had some chunks of them in all the colors--black, blue, purple, and red.

This was probably just a test piece to see how to put the star together. It's peiced onto tissue paper. 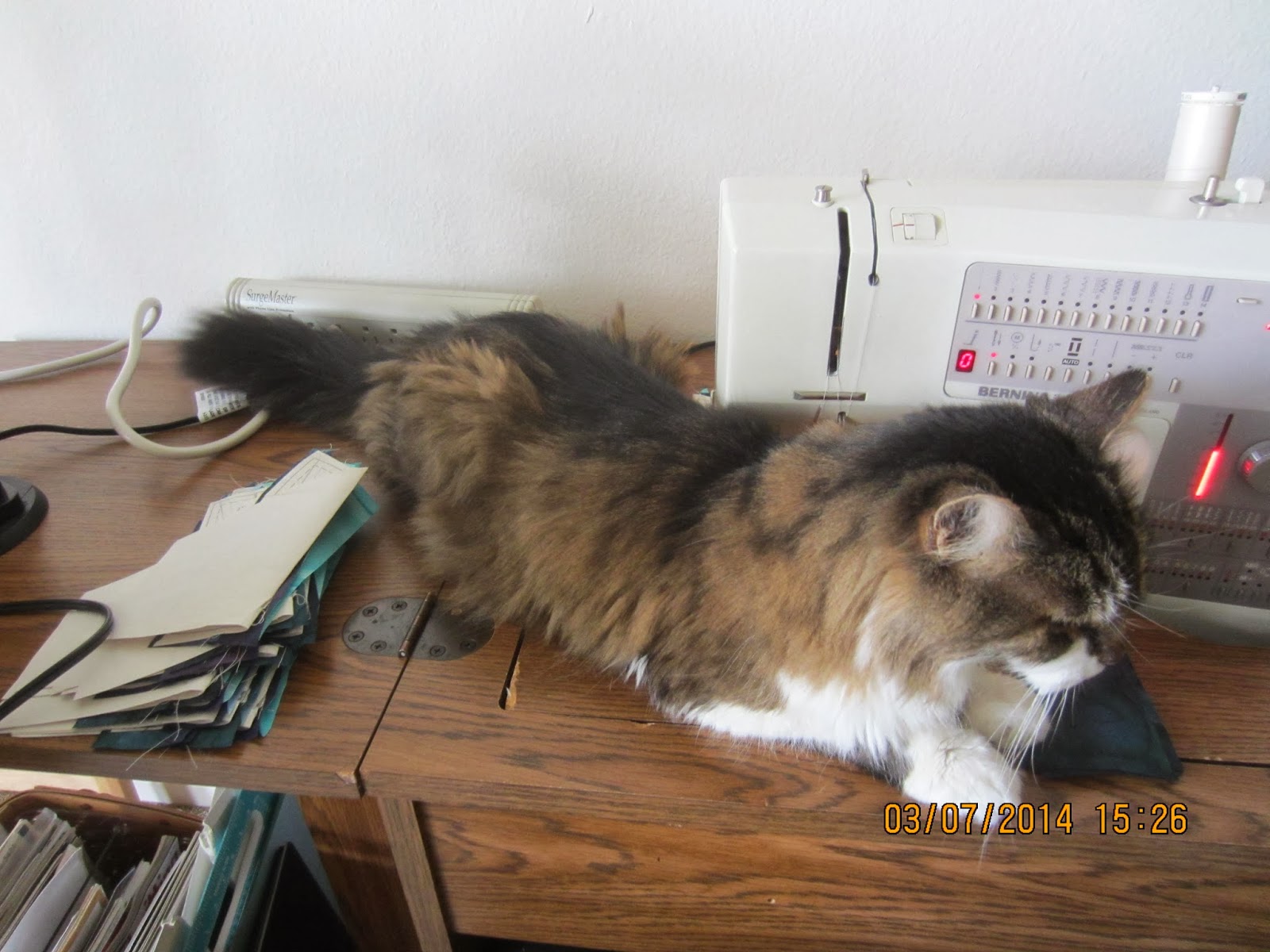 More of my feline helper.

Really, it's a good thing he's cute and cuddly, because he's also pretty annoying when I want to focus on doing something.

More of what was in the oddments box. A whole lot of srips, cut into different widths, and neatly tied with fabric strips. 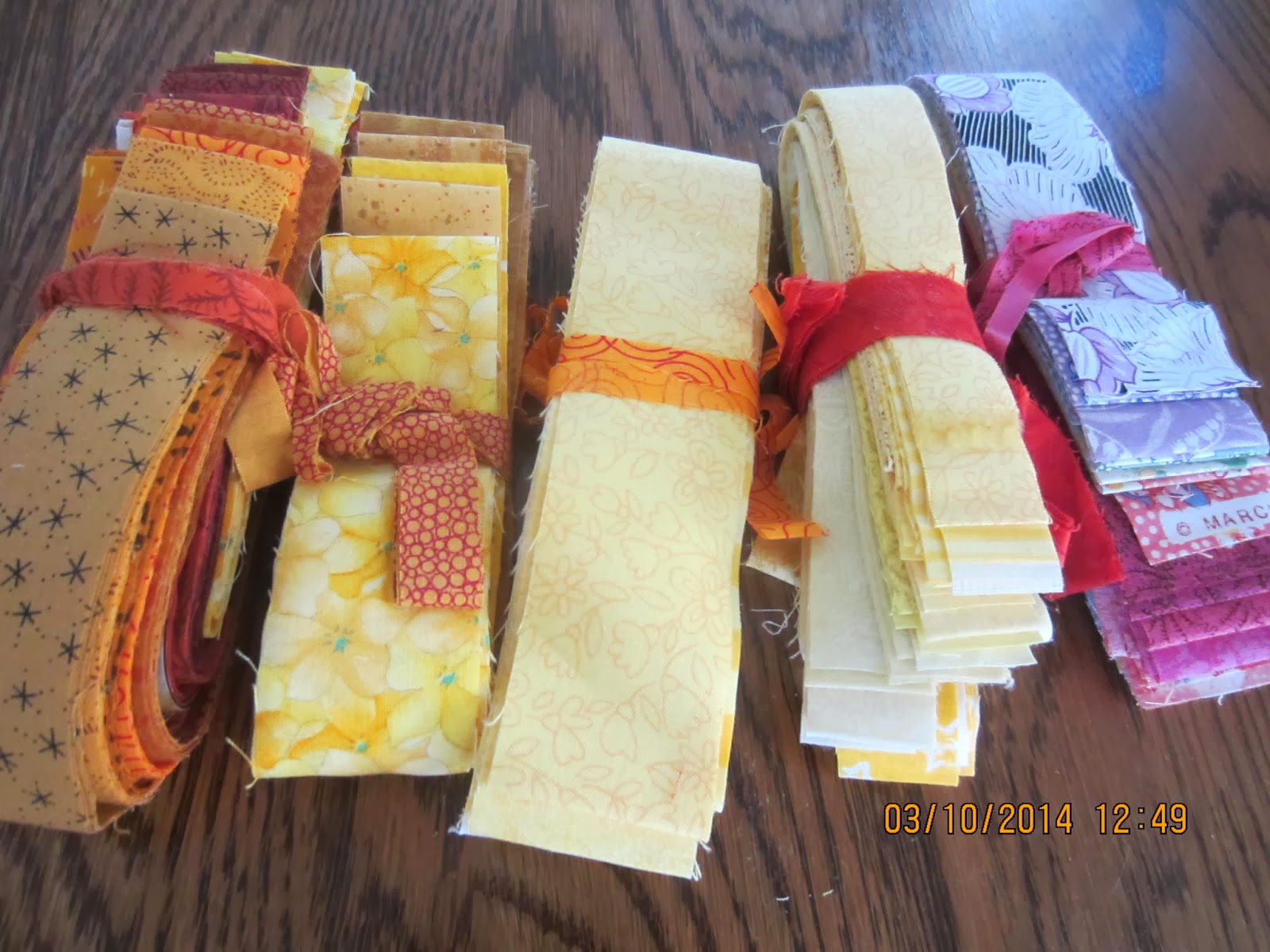 No clue at all what this was meant to be. I'm thinking perhaps a bargello design would work with these.

The colors are much more vivid in person.  The shading is pretty true, too. The prints on the right are all different colors and many of them are 30s prints.

Like I said, no clue. They are all back in their little bag, waiting for inspiration to strike. 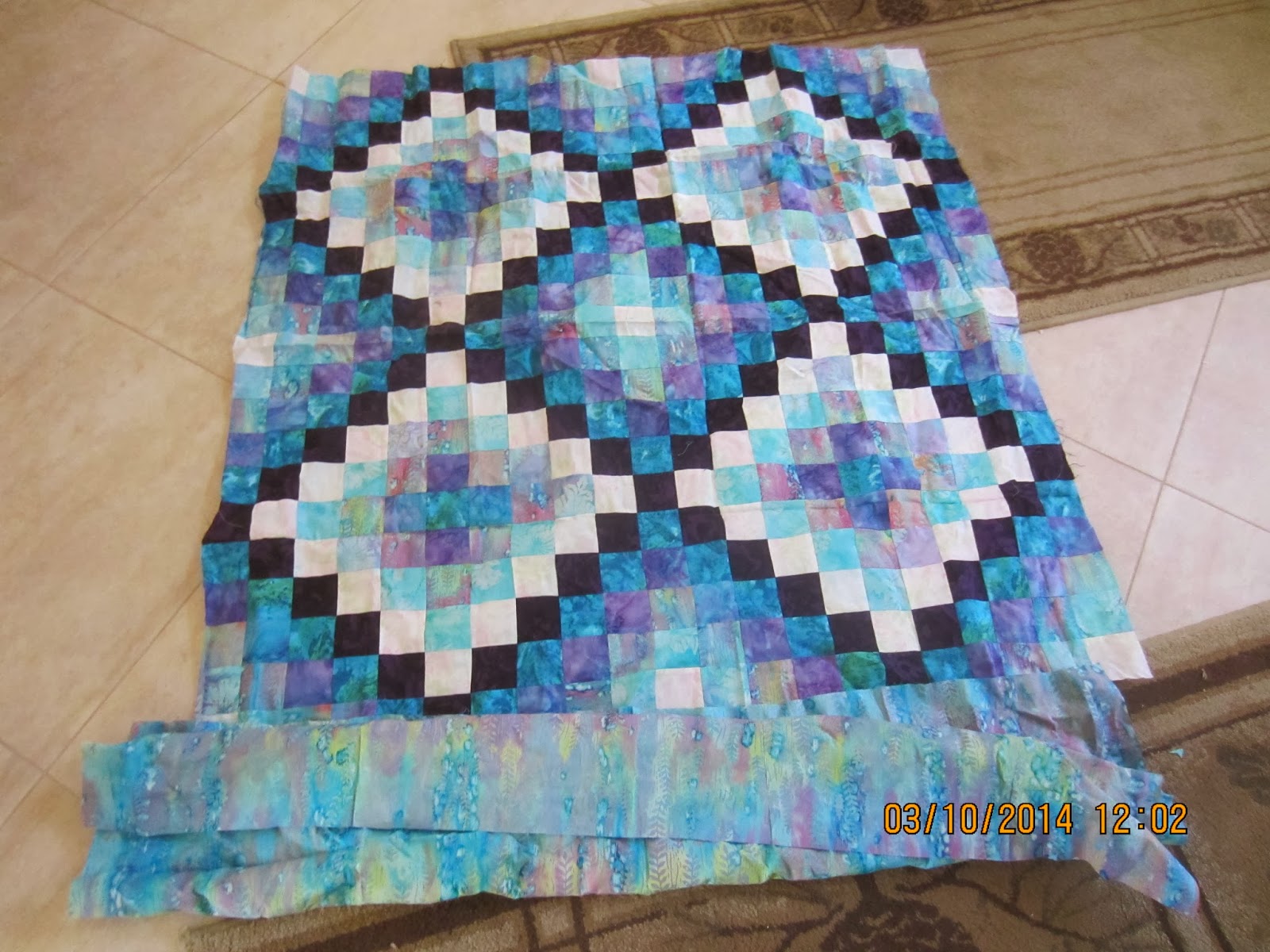 Lastly, in reverse order, the pieced top and the fabric trying out for a border.

That fabric is in the quilt, though it's a little hard to isolate it. Parts of it are very pink, other parts are very lime green, there's some yellow, and a whole lot of turquoise, including some blotchy spots.

I called it psychedlic. However, this quilt top really works in terms of the shading and the interplay of colors. It pops. 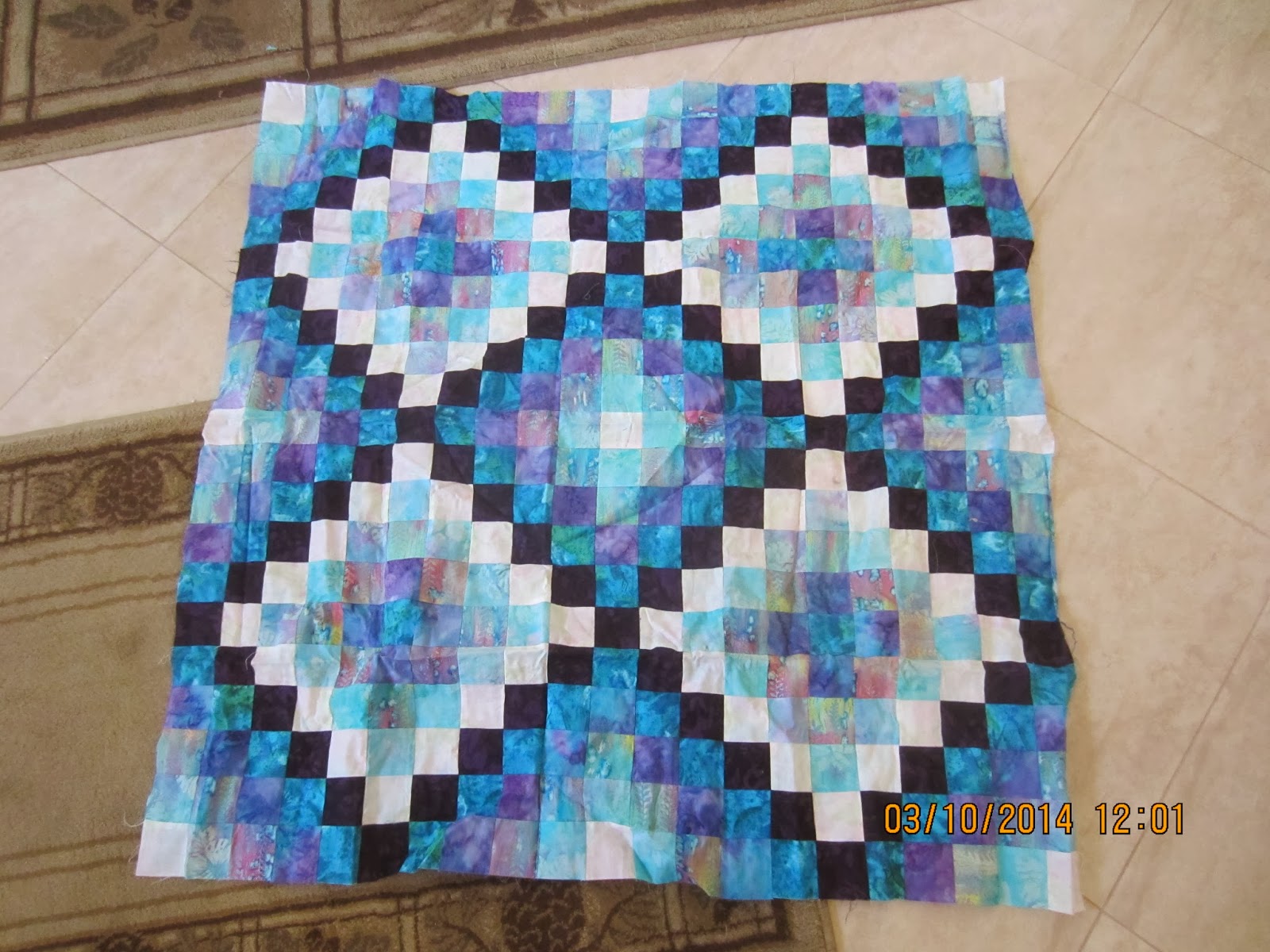 And as soon as I find my box of quilts that are waiting to be quilted, it's going to go in with them. I'll probably quilt it myself--it's only about 47"square.

Back to my Jumping Jax stars, and if I get a chance, I'm going to try to hunt out the rest of the pinwheel blocks. I really feel he need to finish something.
Posted by mehitabel at 11:55 PM 1 comment: