August really has never been my favorite month, but this year it might be a little different. For one thing, I actually live in a house with decent a/c, so keeping comfortable hasn't been the huge problem it was in the past. Not that it's been a record-breaking August, just one more in a drought-stricken state.

We did have a heat wave, but during the worst of it, this is what I was doing: 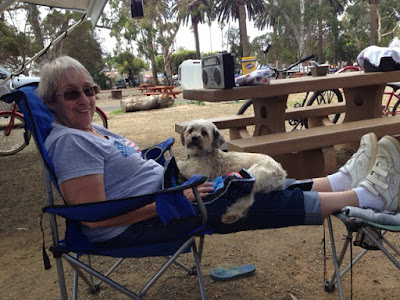 "Camping" at the beach with my daughter, her husband, and their two girls. Oh, and Trooper.

He's such a cutie! And really a very good dog. Likes to hang out with his grandma and snuggle into the quilt she's trying to bind.

Hey, it already has lots of cat hair on it, why not a little puppy love too? 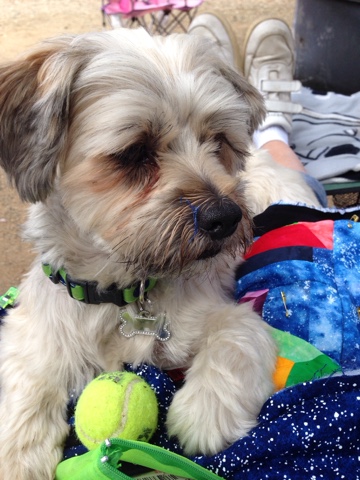 Just look at that face...

I must say camping has come a long long way from the earlier days! They have a trailer with all the mod cons and even dry camping with no hookups was very easy. Of course, as Elderly Honored Guest I really didn't have much to do except entertain the dog and enjoy the kids.

Then I came home, did a little laundry, petted the cat--she didn't seem to think I smelled like Dog, so that was a good thing--and then back to the ever-present binding project. 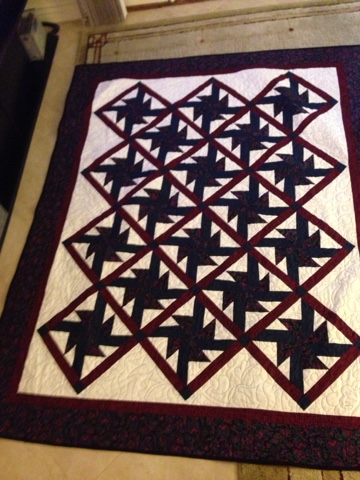 Which racked me up another UFO finished this month! This is the one I called Plum Pinwheels, and which was languishing in my "to be quilted" bin for a very long time. It was one I decided to send off to the longarmers' because, well, because otherwise it would have continued to sit there, unquilted and unloved.

Closeup of how they did, with a peek at the back. You can almost, if you look really hard, see that there are two fabrics in those pinwheels. I made this back in the days when I didn't step back far enough to check that there was enough contrast, so the pinwheels aren't as crisp as they might otherwise be.

Too bad. I like the way it came out and the way the other fabrics pick up on the tones in the print. 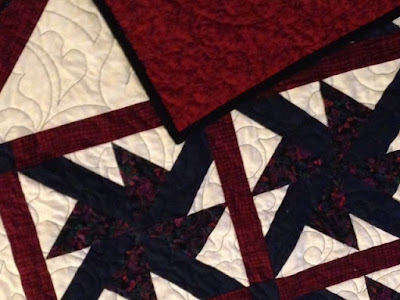 We had the last day of Camp Grandma and the girls got a good rummage in some of the fabric. They loved the flannel print and wanted it spread out so they could enjoy it. Then they got the red-rose swirly minkee and the black sherpa (I'm going to make at least two throws out of them, with the red on one side and the black sherpa on the other) and made themselves "nests" to snuggle into and play Metamorphabet. Thank goodness for apps that work on the phone and the iPad both! Sneak in a little reading practice and letter recognition while they're having fun. 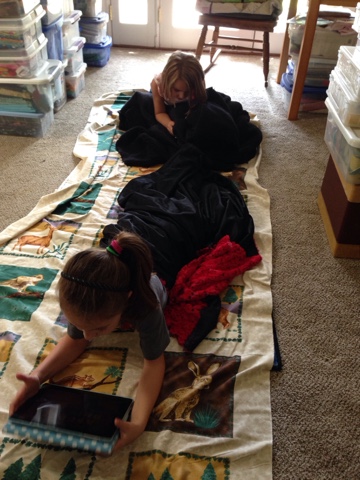 Later on, the nests got expanded by using every pillow from my bed, the sofa, and every throw and small quilt they could find. I couldn't get a good pic of that--nowhere in the room to stand.

And yes, all those plastic tubs are holding fabric or projects of some sort. Or supplies--the ones on the far right are all boxes of spools of various kinds of thread. I thought I didn't have to buy thread again, ever, until suddenly I needed black thread--and had none. Black glittery, sure. Shiny black. But no plain old workhorse black. Luckily I work in a quilt shop...

So on a quiet evening at the end of hectic week, I was able to sit in my comfy chair with my comfy cat-buddy and sew a little more binding--this is the Cats All Year quilt, and like a couple of others, it needs to be quilted. But I decided at one point that I'd feel better if I put the binding on all three of them and then finished the quilting. 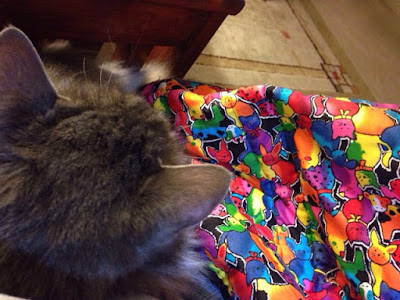 One more week of August, although for my crew, summer vacation is over. The grandgirls go back on Monday and the little grandboys have already been back for two weeks. Oldest Denver granddaughter is off to college--Colorado State for my vet-to-be.