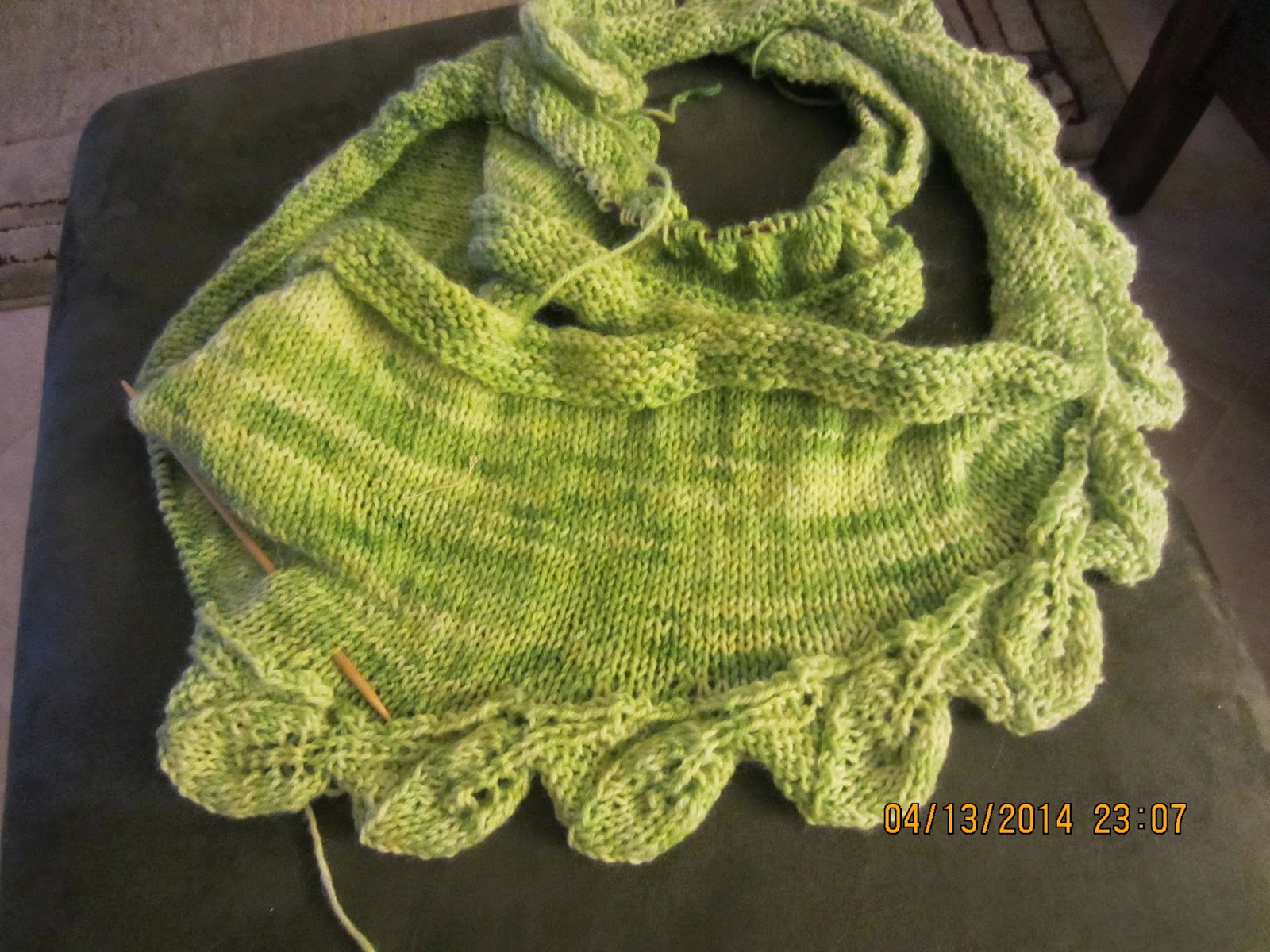 Why yes, I am still knitting! Now that all of my quilts that needed binding sewn down have been done, I've been able to pick up a knitting project or two. This is the Cedar Leaf Shawlette, in Araucania wool.


But I'm still plugging away on the pinwheels, though I have reached a milestone today. 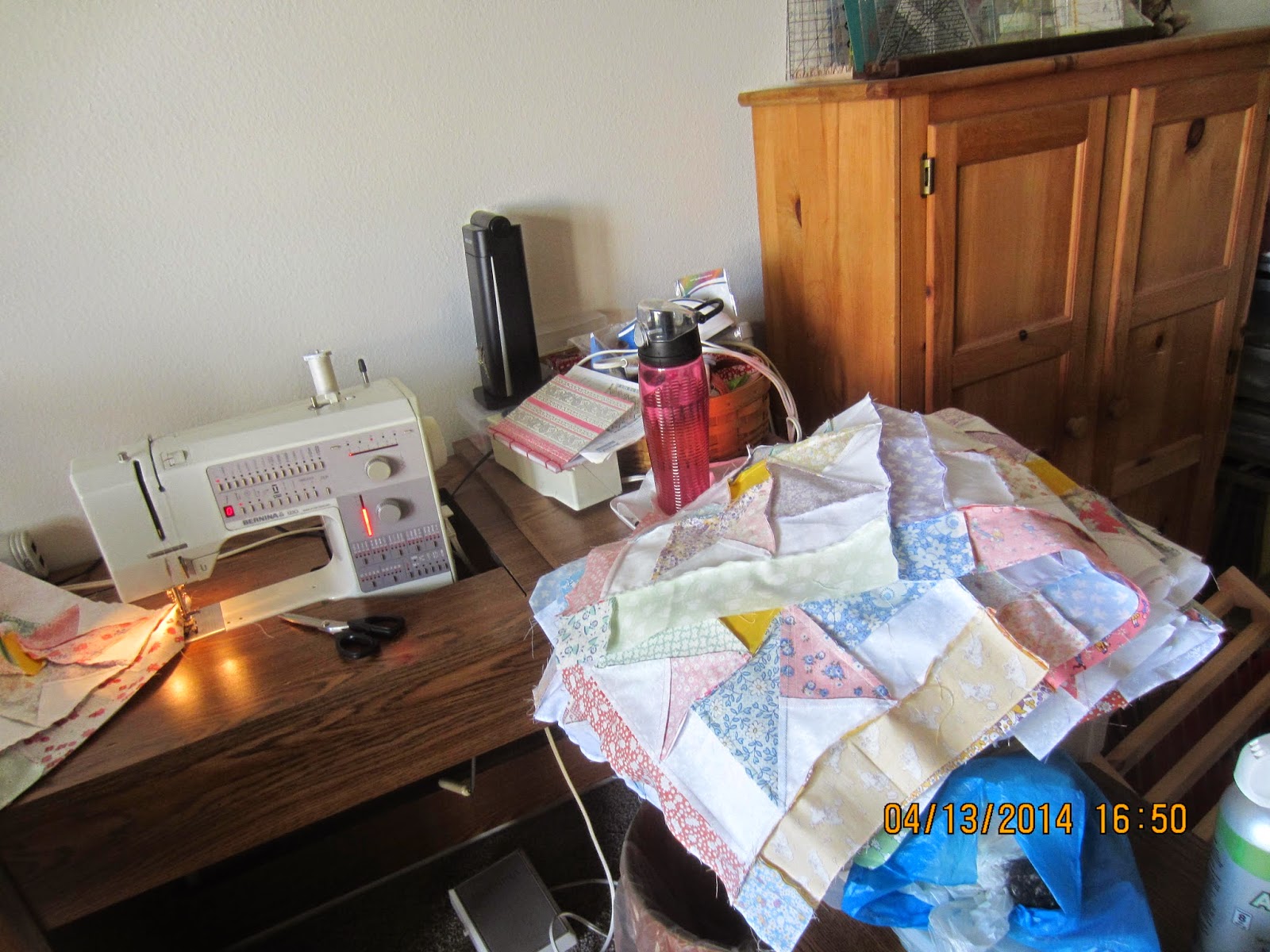 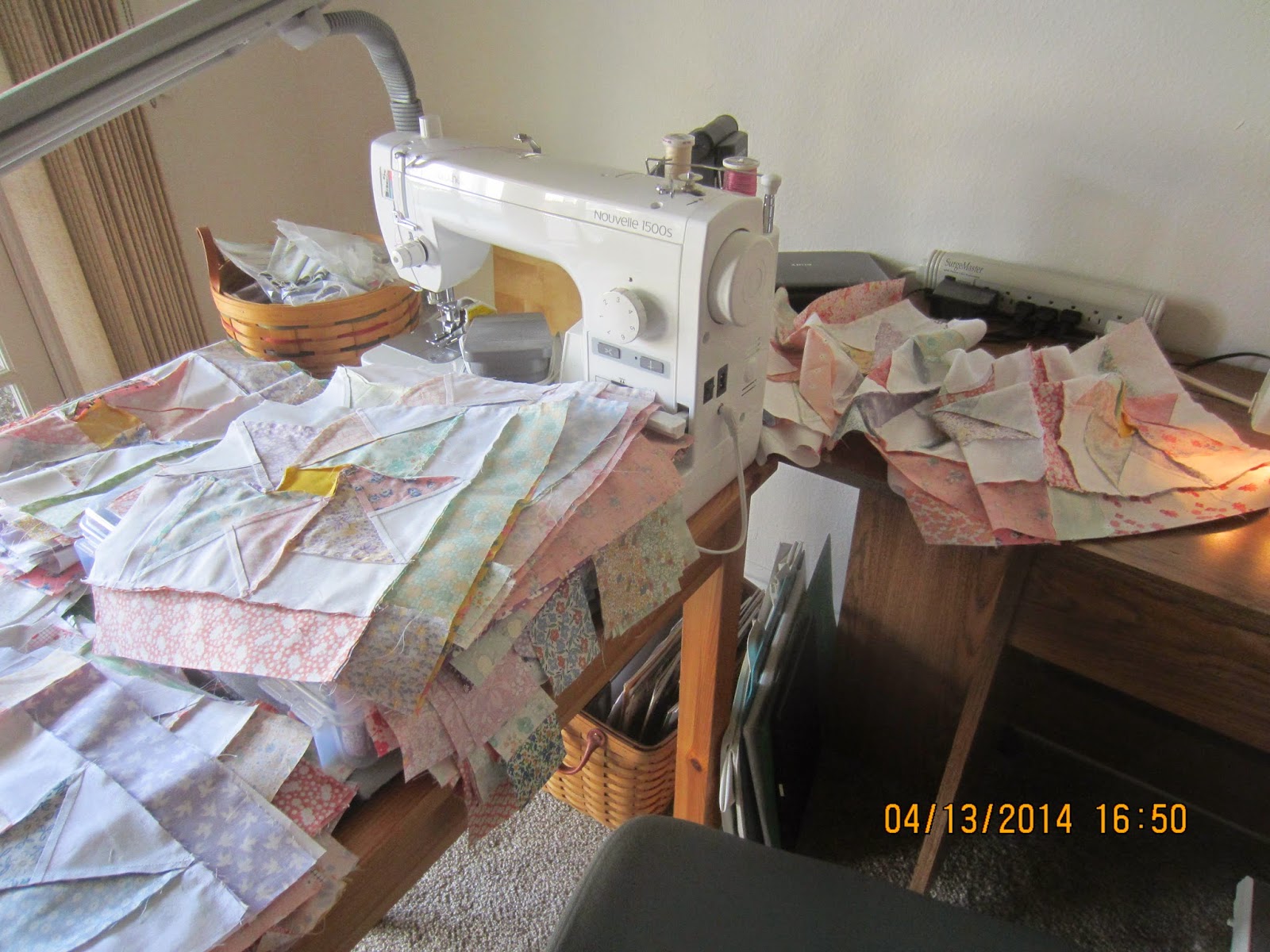 I think I left off on my last blog post with all of the second set of blocks having had their second round of sashing-and-cornerstone added. This put me in line for the next step, assembling the rows.

Ten rows per quilt, three quilts in this batch. I learned a few things assembling the first batch, so this one went a lot quicker.

First I picked out six blocks for the first row, which is one block with sashings and cornerstones on 3 sides. Those were quick to do, and made me feel as if I was off to a good start.

Then I counted out 24 blocks for the next 4 rows. Yes, I counted them three times. I do not trust myself with math where these quilts are concerned!

I took all the rest of the blocks and sewed them into pairs. I then divided them by the color of the leftmost sashing strip, since that's the side that would be sewn to the  row-in-progress. 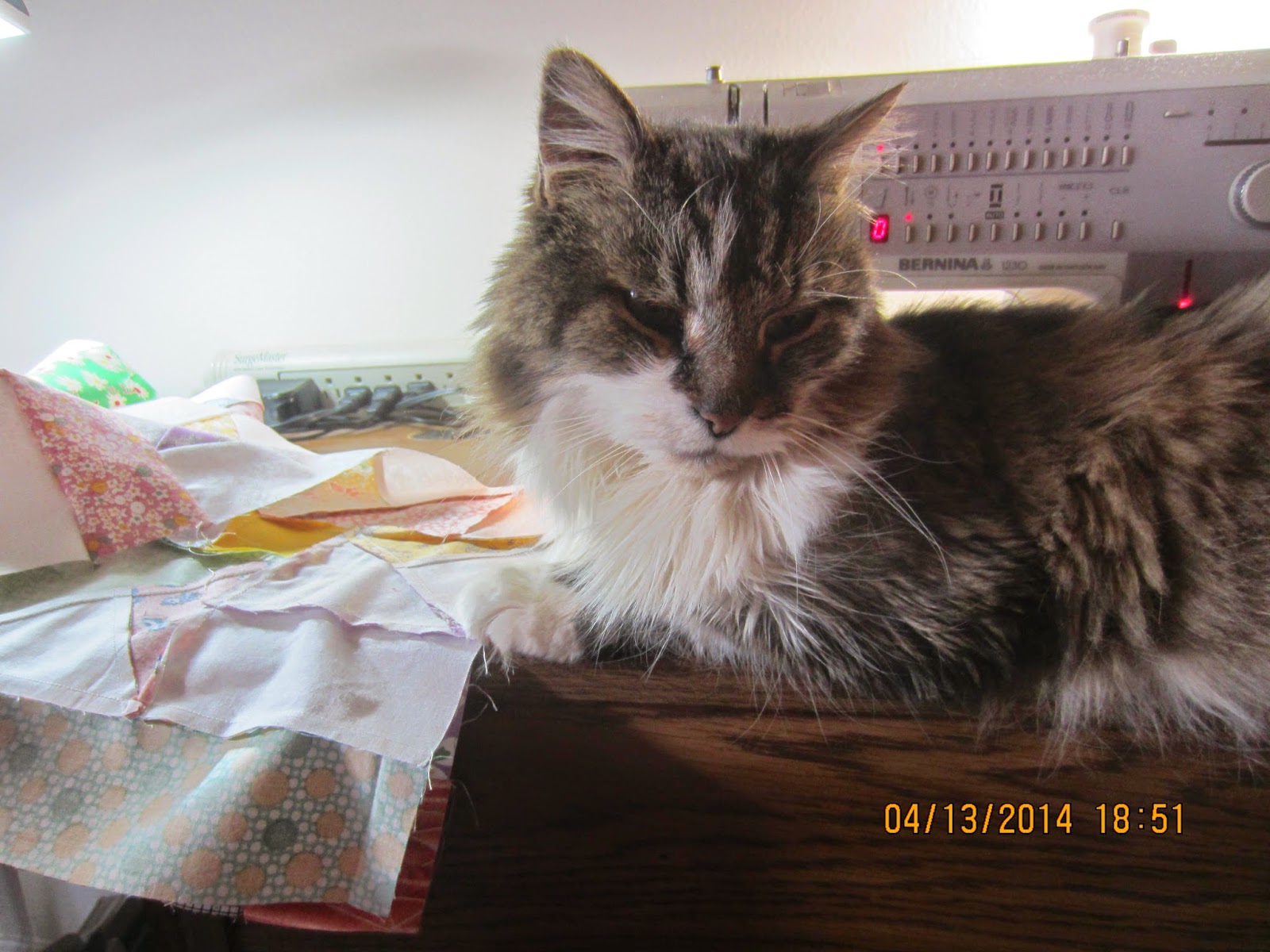 The quilting supervisor was not amused. However, I thought it was rather funny that the blocks had ended up that way, since I'd tried to be really random when sewing them.

It actually worked out really well. I had a lot of reds and those mostly looked best sewn to a purple, so the other colors--pinks, greens, yellows and blues--mostly wound up sewn to orange blocks. 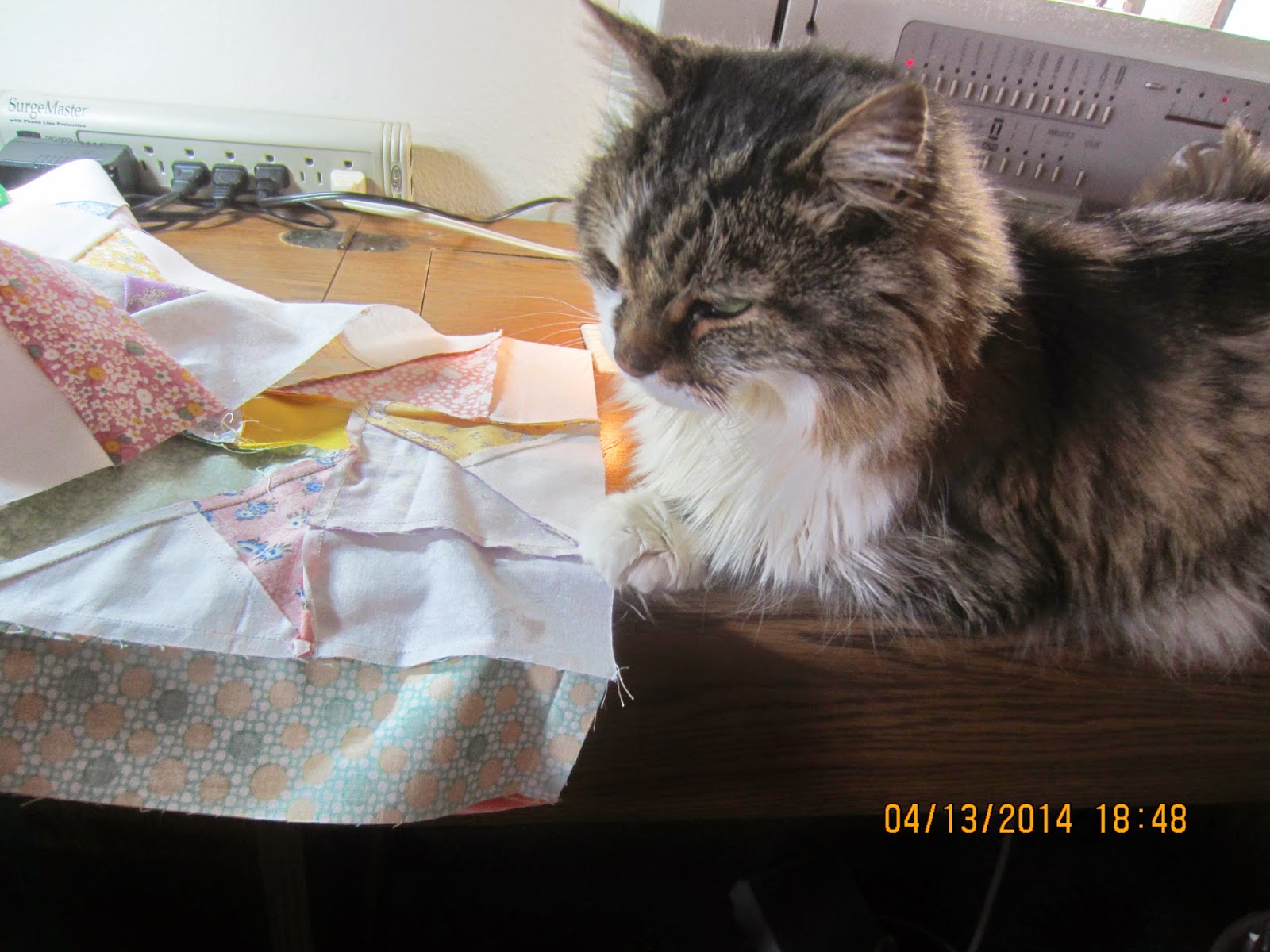 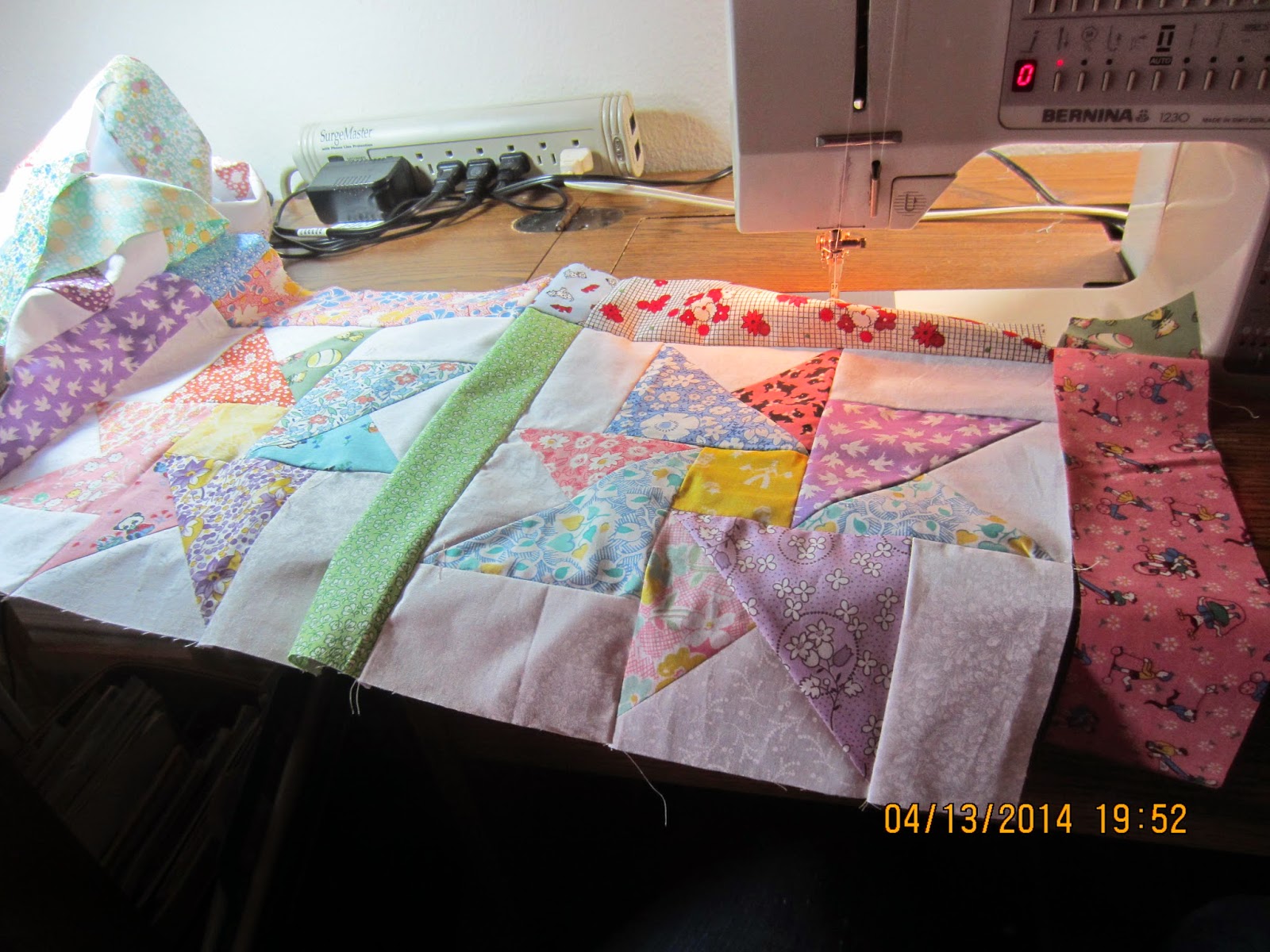 After that it was a matter of sewing a pair of blocks to each of the 24 I'd reserved. Once that was done, 6 of them got a second sashing and row 2 was done.

Lather, rinse, repeat. The good thing is that each round meant 6 fewer blocks to sew, till I was down to the last set, which contains 9 blocks.

HiHi was not very happy because this all involved a lot of blocks spread out everywhere. He'd get himself comfortable on a stack, and I'd need something from it. I was almost feeling guilty every time I made him move. He's been working on my sympathy anway because he's so thin under all that fur, and I alternate between worrying about him and then realizing that he's eating plenty, still able to jump up onto my (very high) bed, and has the lungpower of a mountain lion. He's also 17 years old.

So here's the last sashing strip getting attached to the last of the rows of blocks. 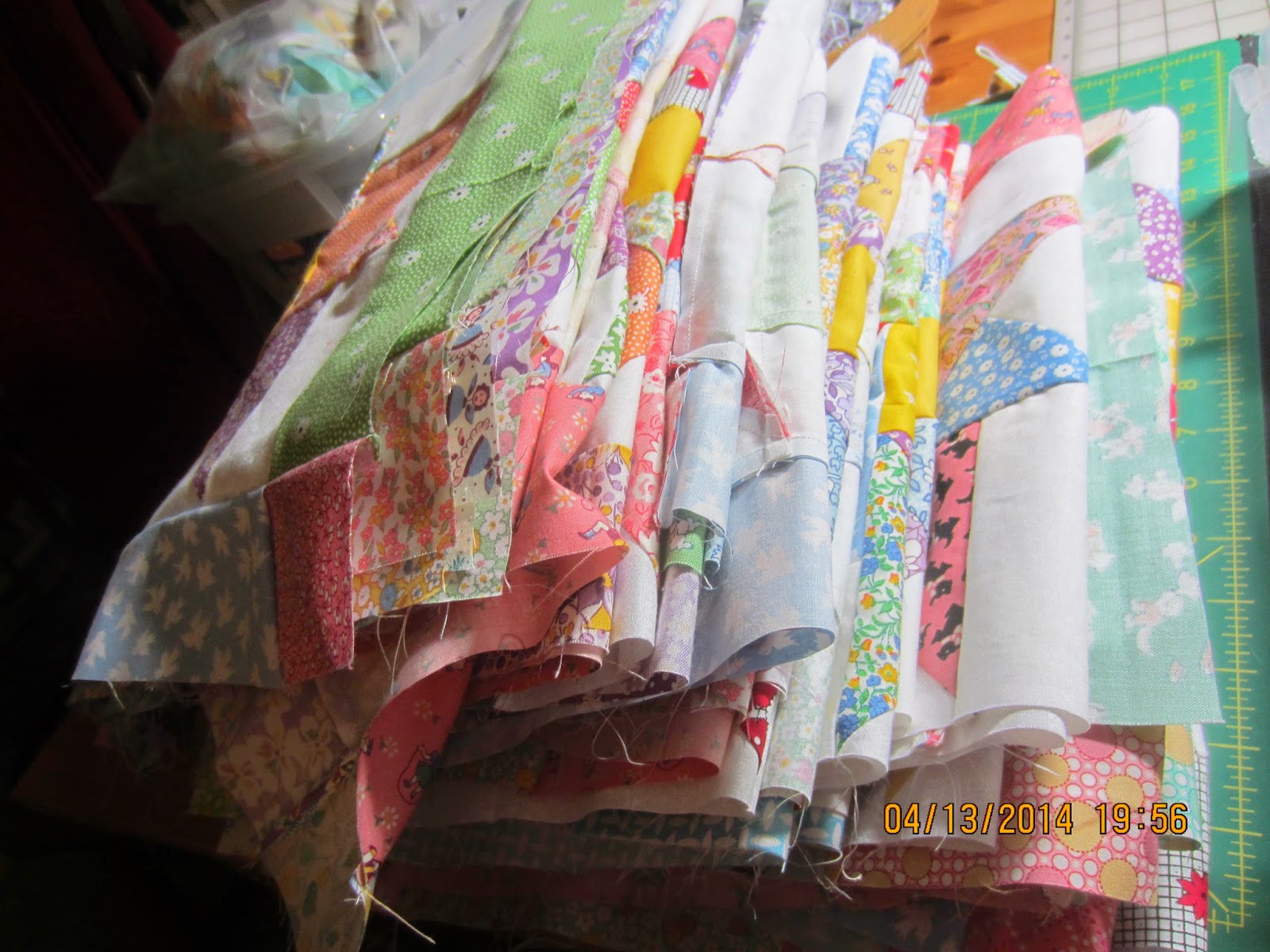 And here's the second set of 150 blocks, all ready to be assembled into 3 quilts. I need to find the white fabric I'm pretty sure I bought to do the setting triangles with--I've looked for it, but if it exists it's not readily accessible. Tomorrow I'll look again, and if I don't find it, I'm going to buy more. The shop has white-on-white 108" wide fabric and that would be a really efficient way to cut as many triangles as I need. Yes, I need 18 per quilt, plus 4 corner half-square triangles.

More math, but I'm pretty sure I can manage it this time. 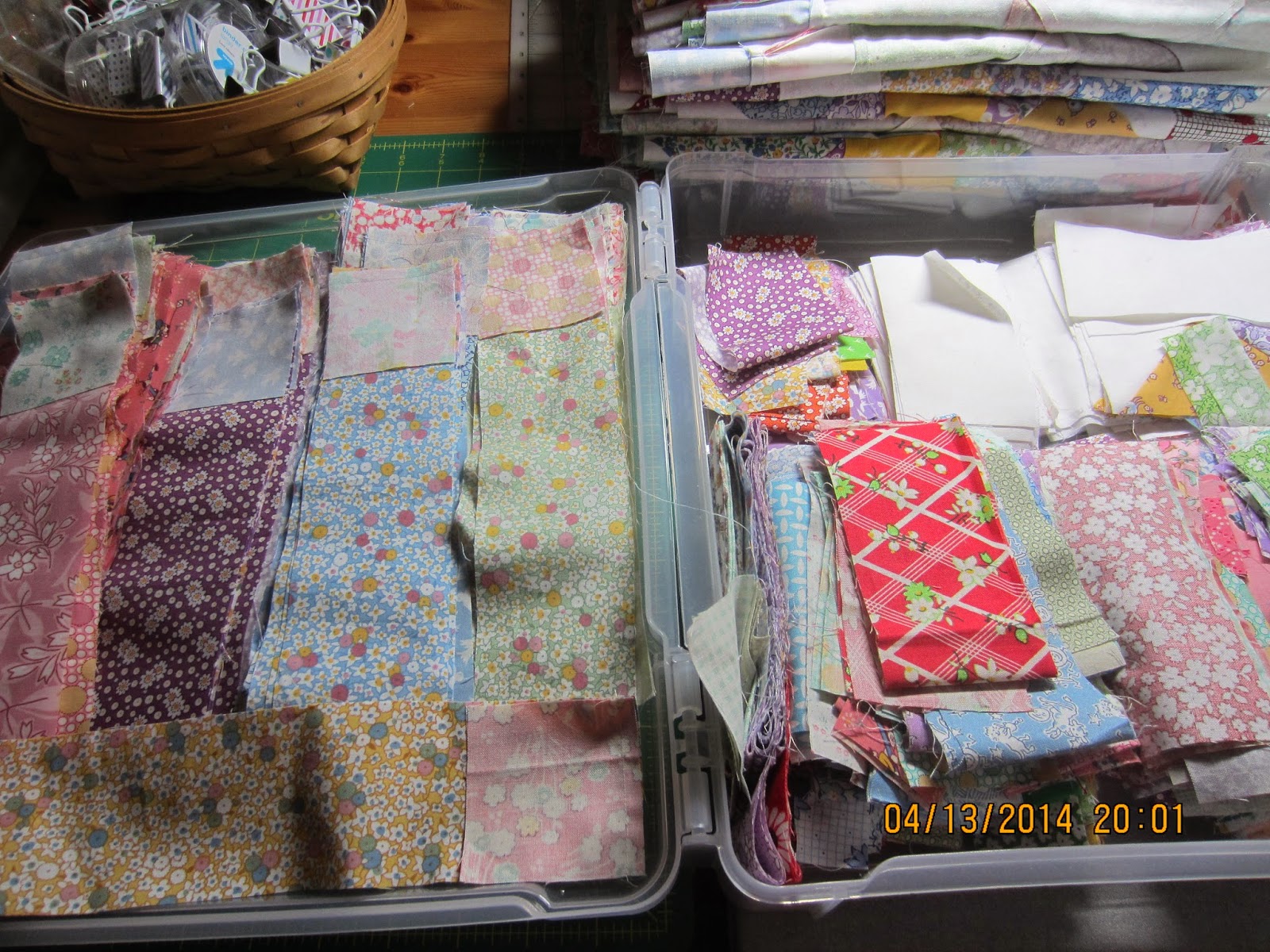 This is my box of leftover sashing and leftover strips from cutying out the blocks. My next big task (other than putting on the setting triangles and assembling the rows) will be putting borders on all the quilts. I really would like to have some different styles and I've been playing with ideas on how to best use these pieces. I think it could be lots of good creative fun. Scrap happy rules!

I'll leave you with the view I finally had when Mr. Fuzzball had had enough of my shenanigans! 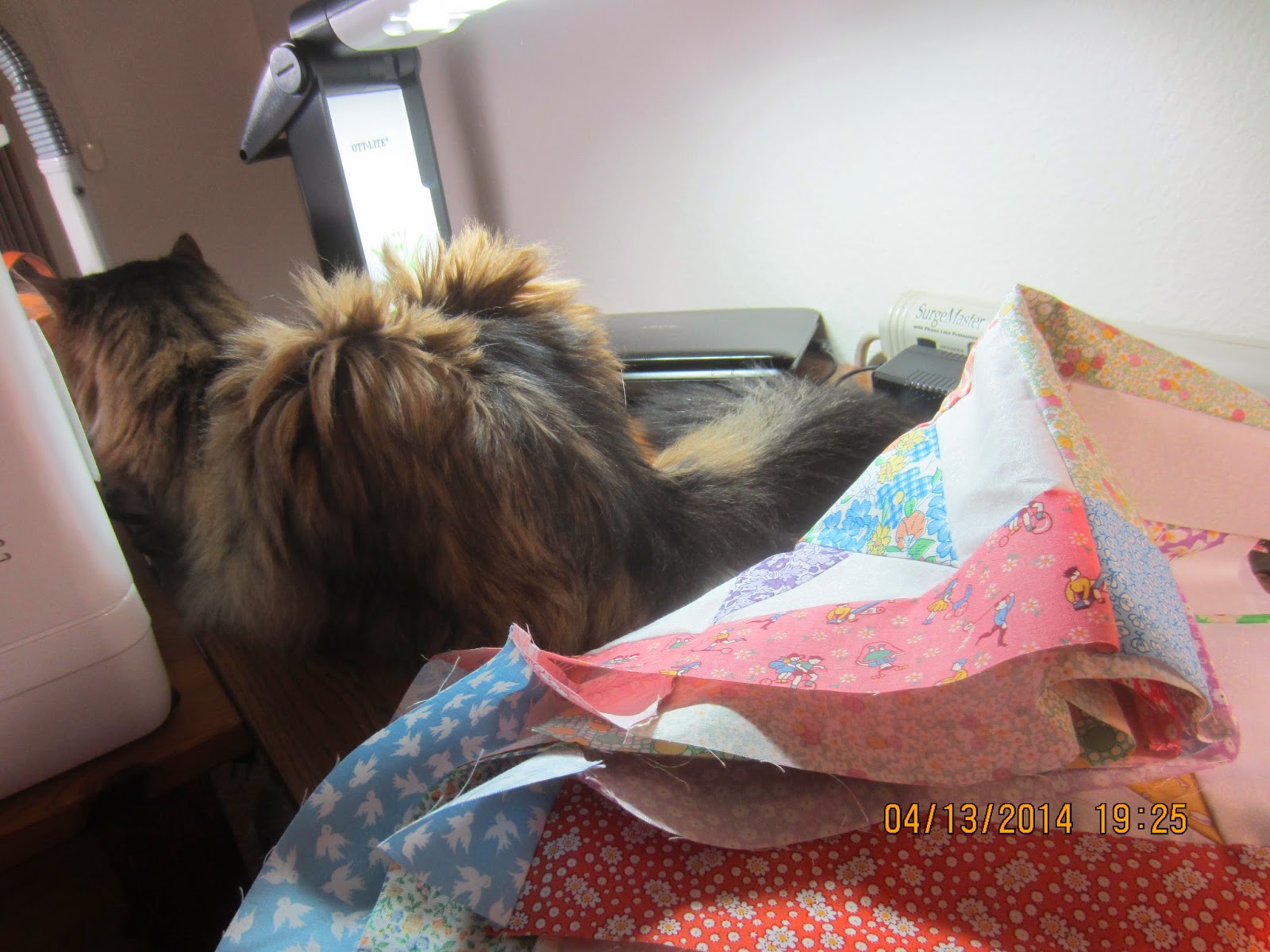