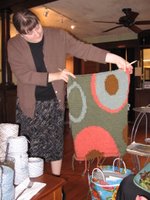 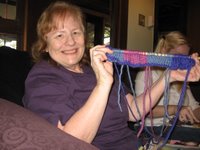 Wobblies of the world... presenting a couple of in-progress wobbly circles totes! Madge is on the second side of hers... Joan is moving a little slower, but that's because she's been otherwise occupied recently:
Yarny goodness! Joan was a winding machine... by the time we left, the pile looked quite a bit smaller! 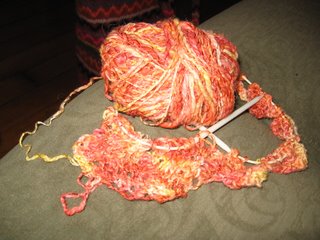 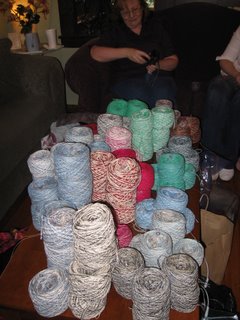 This little bit of orange and yellow knitting was the start of an entrelac piece. Un-hunh. The color runs are too short, and the yarn is too uneven to look good in entrelac. Now you see it... but now you don't, because it's back to being a ball of yarn in my knitting bag. I'm sure that this yarn can be something wonderful (right, Junie?) but this sure isn't it. This is the only bit of new knitting that even survived this long; this particular ball of yarn has been knit, frogged, and reknit so many times it's beginning to come unspun. And, no, none of those balls of yarn on the table came home with me. I'm really trying not to add to the bulk of the stash. Luckily Robyn mentioned that she "has no stash"... well, now she does!
Posted by mehitabel at 4:05 PM 5 comments: 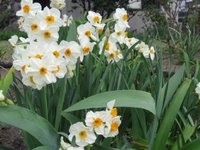 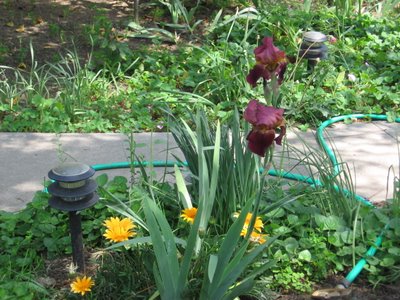 In honor of May Day, here are some pretty flowers from my yard. It's been a hard few years on the place, but as you can see on the right, the irises and gazanias took the move well. They were on the strip of garden along the driveway, which is slated for urban renewal soon. Saving them from the construction was a Good Thing. I was also pleased to notice that my lilac bush--which got an extemely heavy pruning last year, in fact almost came out--has a few buds. So tonight, it's the MD knitting book for me, to see if there is a pattern there for my B&B yarn. Oh, and the hunt is on for the mystery-fiber orange and yellow, too!
Posted by mehitabel at 4:30 PM 2 comments: 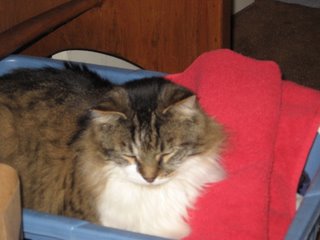 This is another of my furry babies--his name is Highland, aka Hi-Hi. He's (part?) Maine Coon, very densely furred, no voice, adores curling up in baskets and wrestling with Simon. Since he's almost twice Simon's size, you'd think it would be no contest, but this guy is so sweet and gentle it' almost no contest! The gratuitous kitty-cuteness is because I spent two and a half hours last night casting on, doing a couple of rows, and then ripping out four different projects. First I tried entrelac, with some lovely lovely Bullfrogs & Butterflies in the Happy Valley colorway. Really pretty yarn. Really really ugly entrelac. Rrrrrrip! Okay, try the basketweave pattern. Well, the edge isn't that pretty with cable crossings (3 over 3) on the second row; even less attractive, by row 6, is the striping of the yarn which covers up the pattern. Rrrrrrip! Ohhh...kay... let's see, I have some loverly yellow/orange variegated stuff that I think has longer color runs, is it nearby? Of course not, it's hiding and cowering in fear. But here's a nice seaman's scarf pattern in cables and lace, in a wonderful yarn. Cast on the temporary caston, do a row. Second row? Doesn't fit. By this time, it's dawned on me that I should probably just rrrrrripppp that out too, and go back to WIP-working. Done. Got a few more rows done on the "found" blue hairy stuff and went to bed early. Sometimes it just doesn't seem to be the right time to start a new project, does it? Hi-Hi followed me up to bed, the way he always does, and we all had a good night's rest.
Posted by mehitabel at 4:05 PM No comments: