Of Endeavour and Paris Snapshots 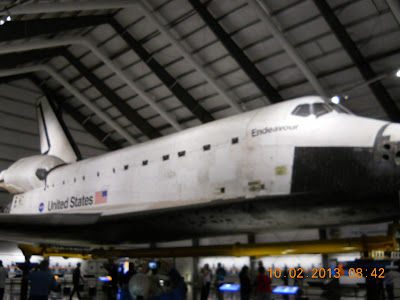 Probably I should have uploaded these pictures in reverse order, since the Parisian ones predate the space shuttle shots--but oh well. Please bear with me.

I returned from Paris on Saturday night, and on Monday night my brother arrived in town for a very brief stopover. He likes to drive out (from Mass.), spend some time in Arizona with his kids, come to visit me, and then head back home, generally stopping either in Vegas or Denver to visit with my daughters and their families. 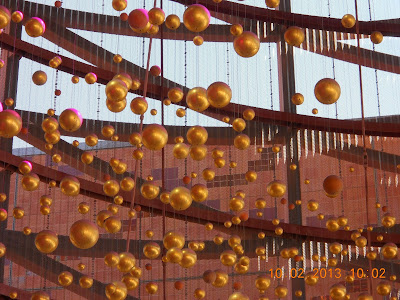 This time wasn't much different. We like to do one kind of "touristy" thing whenever he gets out here, and this time he wanted to see the space shuttle Endeavour, recently arrived in L.A. where they are building her a magnificent new home. Meantime, she's housed in a giant hangar at the ScienCenter (their spelling, ugh) as part of the Exposition Park/LA Coliseum complex.

The floating space balls are in the rotunda of the building. The magenta color is due to the magenta skylight at the top of the structure. Lots more pics on my Flickr page if you're interested in seeing more of the rotunda, or a space potty, or some planes, or maybe a few closeups of the shuttle. She's still covered in space dust. Pretty awesome, and it's amazing to me the sheer size of the thing. I mean, I've seen the pictures of her stately progress from the airport to her new home, but dang, that thing is BIG.

One thing that really disappointed my brother is that you can't go inside/see inside. There are lots of displays with scale models and pictures, but I think he would have liked to see the real thing.

Then last night we had dinner with The Daughters and their families, which was about as raucous as y ou can imagine with 4 kids 7 and under! Fortunately, Islands in West Covina has a nice outdoor patio with a fence all around it, and it was cool enough and breezy enough (and maybe totally noisy enough) to discourage anyone else from joining us out there. They did turn on the heaters and it was just right, warm enough but not so hot that we felt cooked!

Now my brother's on his way home, with his little SUV loaded with goodies for the Denver and Conn. branches of the clan. I had him almost talked into taking the blue recliner home with him, but he'd have had to lash it to the roof and that was just too much hassle. 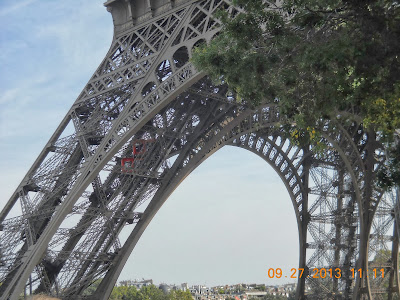 So just a few pics from France--if you want to see the 1600+ that I took, you can go to Flickr. Most every day has its own set, except for the days when we were in St-Remy-de-Provence and were limited to the lobby computer for wifi access. I asked the girl at the desk if she could reboot their server, but she only knew to reboot her computer. Which did nothing. Oh well, a couple of days in, and "someone" figured out how to fix the problem! Minor glitch really! I think this whole wired world has sorta spoiled me, but really all our hotels had great rooms and great access. 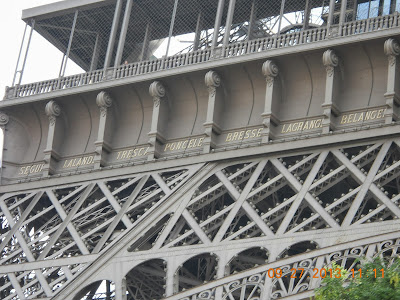 Not that a lot of time was spent in the rooms! One thing about traveling with Jeanne is that  she plans lots and lots of things to do every day. Of course one can choose to opt out of something that might be too strenuous or even dangerous, but for the most part the pace, while brisk, was eminently doable even for someone like me with some mobility issues.

Our hotel in Paris, the Muguet, is just a few blocks from the Eiffel Tower, and from our room we had a lovely view of the gilded dome of Les Invalides. That meant that we could take a short walk in the evening to see the tower light itself up and sparkle for a few minutes. Quite impressive. Of course the whole edifice is impressive. There are lots of details that don't always show up until you get close, like the names along the frieze that runs around the first story. I assume that they are scientists, but I don't really know, and should make a point of finding out. 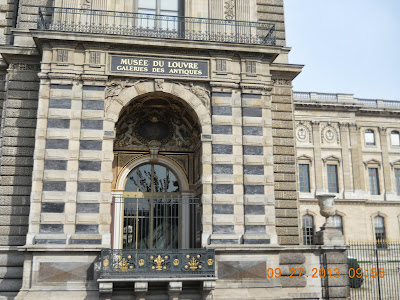 This was as close as I got to the Louvre this year. The crowds in the forecourt were truly awesome in numbers, and this is outside of normal tourist season. However, it was Fashion Week in Paris and there were lots of venues set up all over, so perhaps some of that was overflow. I think one of these years I will plan a quick visit to Paris in the dead of winter so I can tour the Louvre with fewer other folks. We'll see how that works out!

Meantime, still working on plans for the purchase of a new place to live and the sale of the old one--I came home to a broken water heater and an inch or so of water in the basement! Not a good situation when one is tired and smelly from traveling! I also seem to have a bit of a cold, sigh. However, I'm feeling cautiously optimistic that things will proceed well and all these problems will be resolved.

Just a cockeyed optimist!
Posted by mehitabel at 1:46 PM No comments: