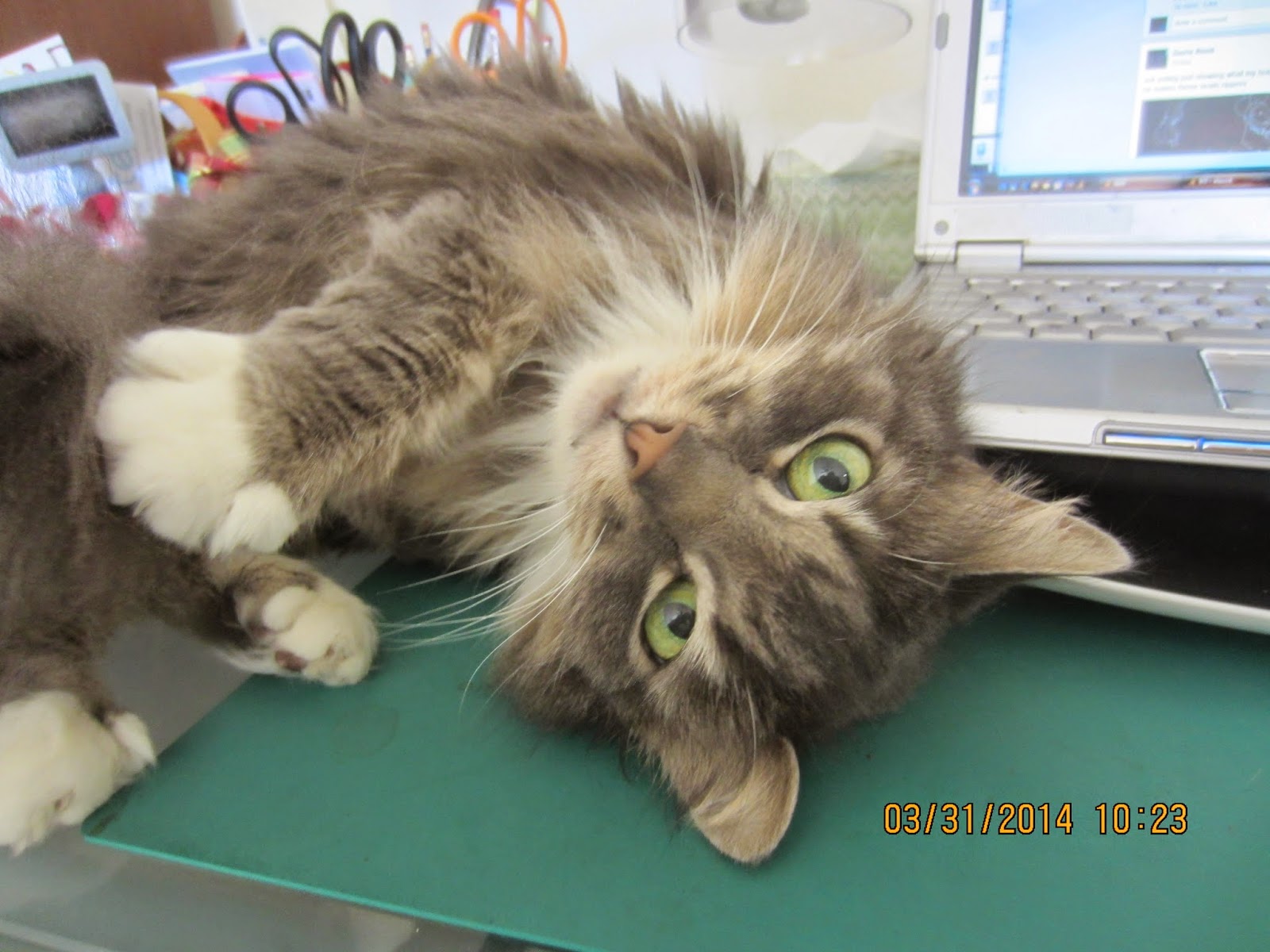 Kind of been a busy-ish week around here, but there's been time for sewing.

And of course, there is a sweet little grey girl cat who wants to be petted.

And then maybe a little more petting?

Cause look how sweet... 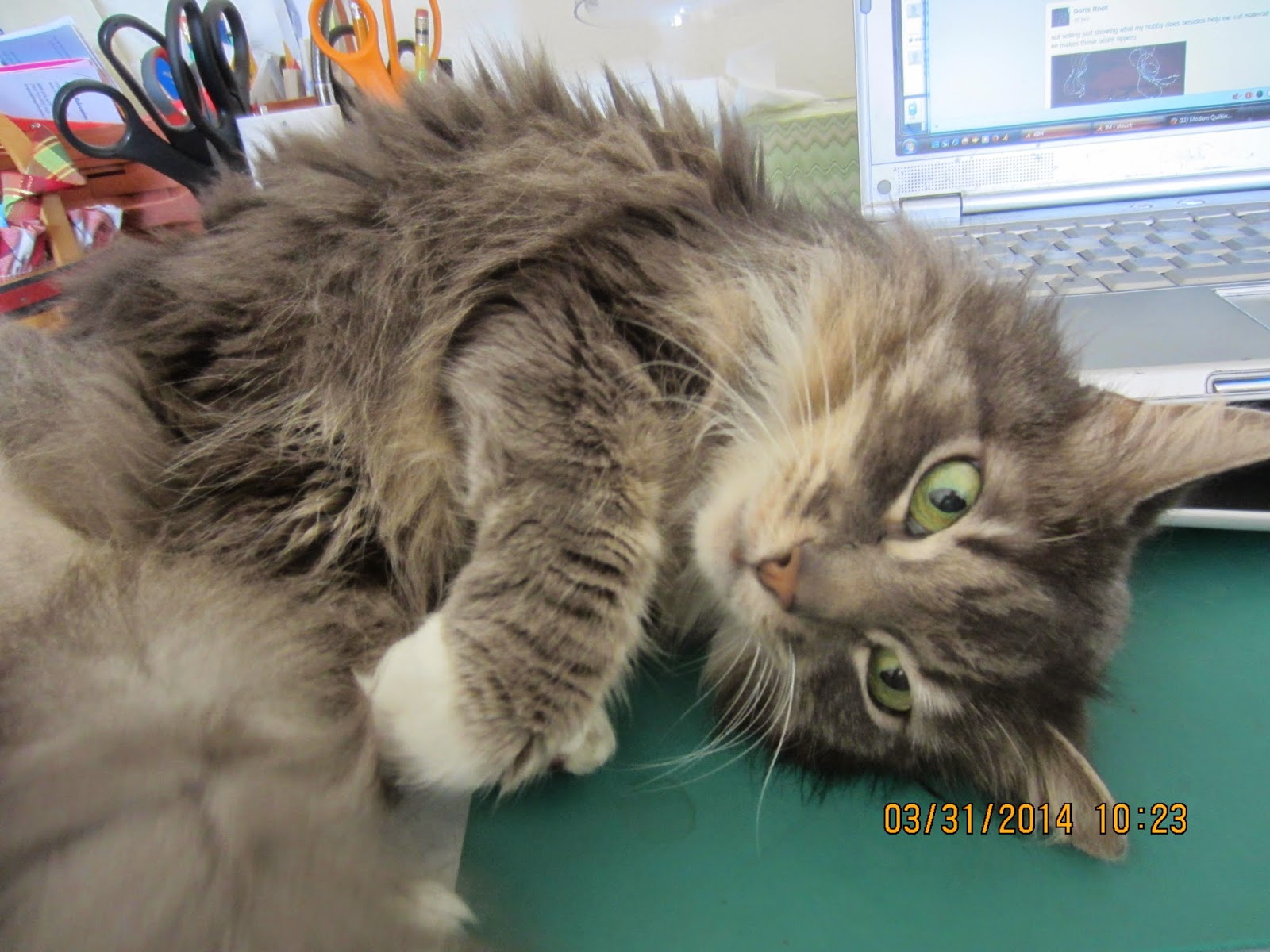 Who could resist that face?  And all that soft grey fur?

Does make it a little difficult to do any work on the computer, though.

Sorry, dear IRS, I couldn't do my taxes. My cat was bogarting the keyboard and my hands!
eall 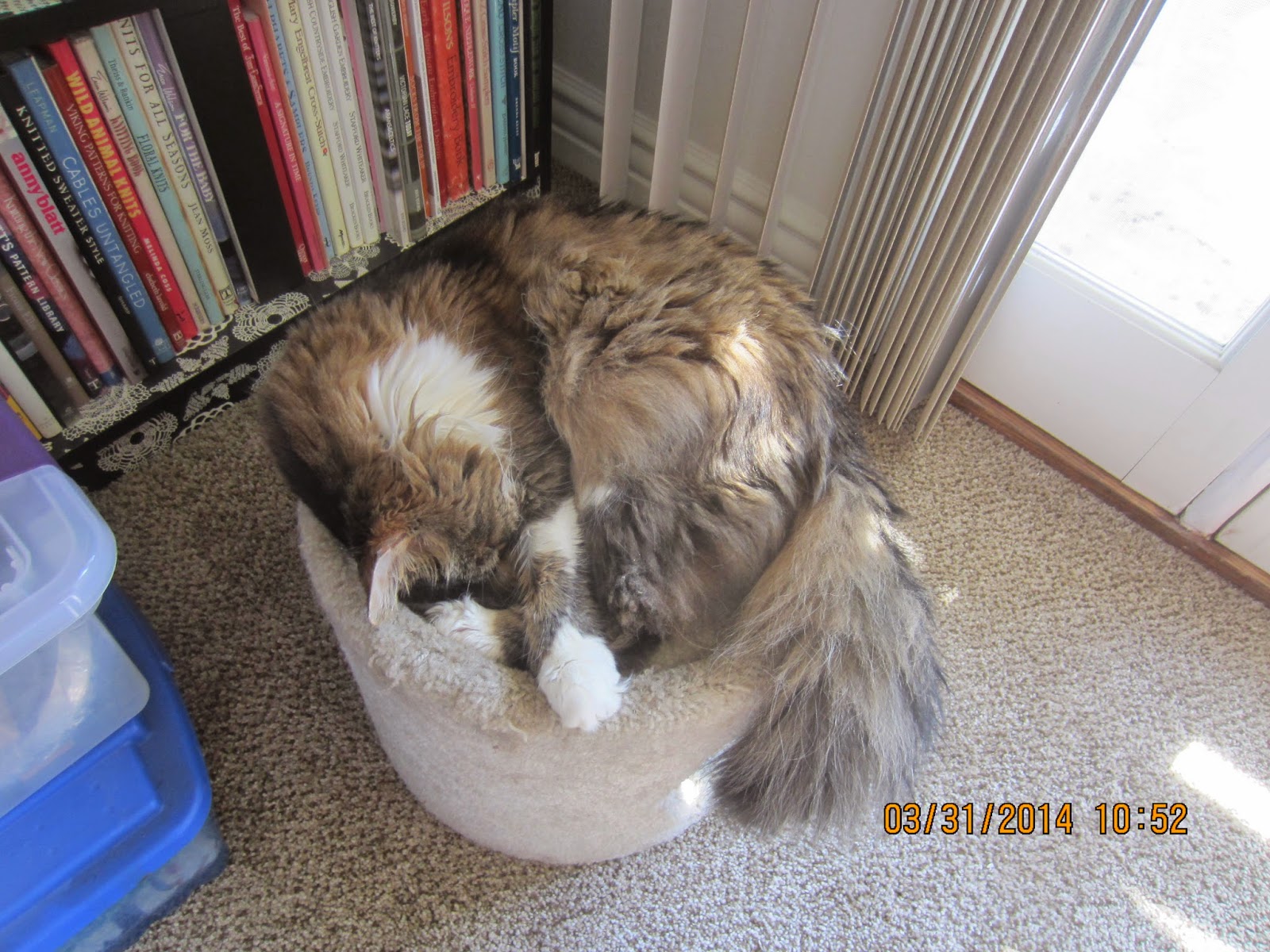 Meanwhile HiHi has rediscovered the little old kitty "condo" from his kittenhood. He's always loved this thing, and frankly it looks like it.

The moving crew (aka my offspring) tried to get me to toss this rather than moving it to the new place, but I thought it would be nice for them to have something familiar in the new place.

He's been curling up in it in the closet where it's been hidden, and really that closet is her "den" so I pulled this out into the sewing room. He's spending even more time in it. Pretzel Boy. 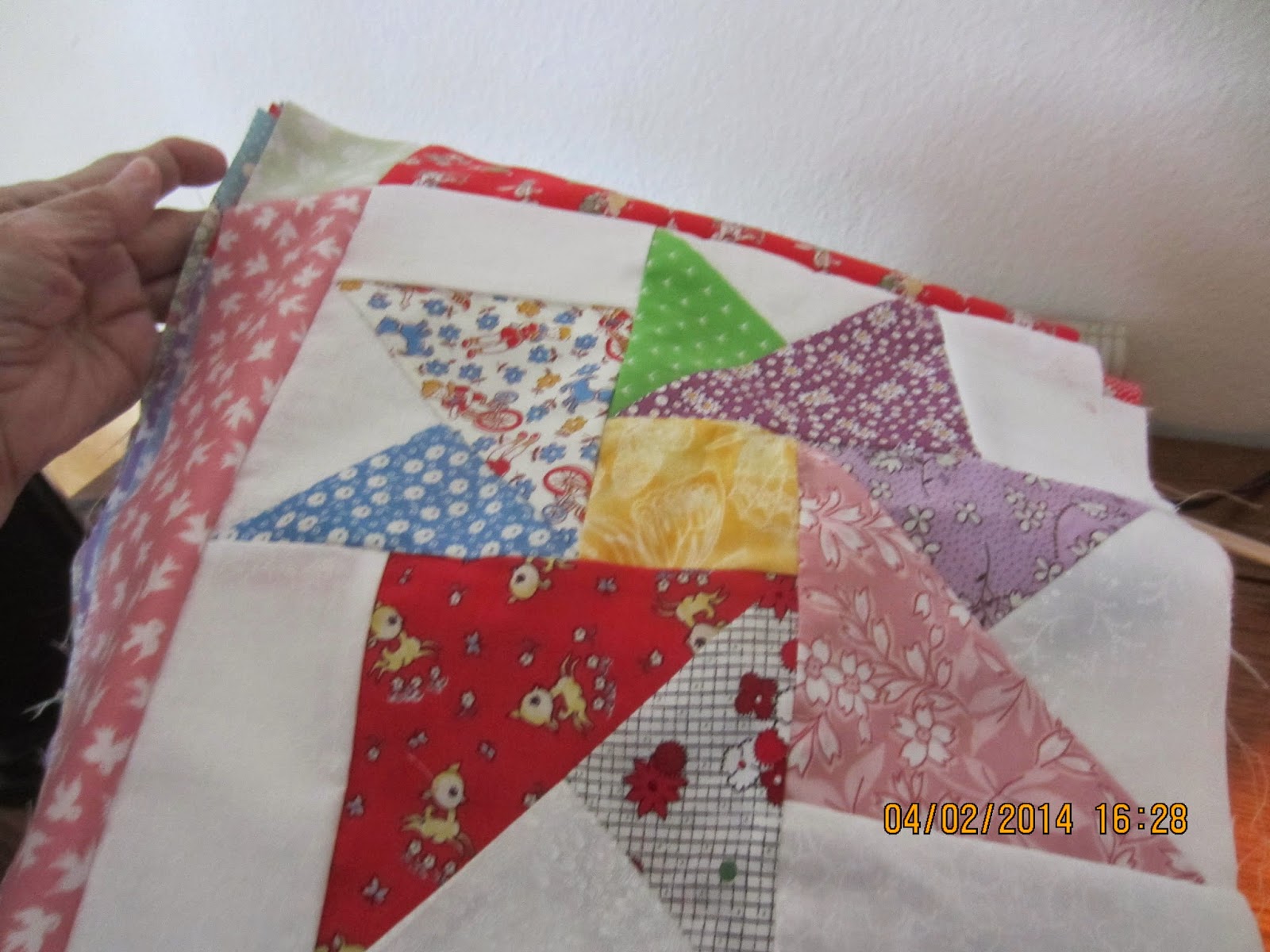 The pinwheels are coming along. At some point in the last day or so, all 150 of the second batch got their second sashing set.

Then I put sashings on the third side of 6 of them, making them Row 1 of the 6 rows needed. Then I sewed another 24 into pairs; then added a third block to them all.

Six of those now have sashings on the last side, so there are now 6 sets of Row 2. 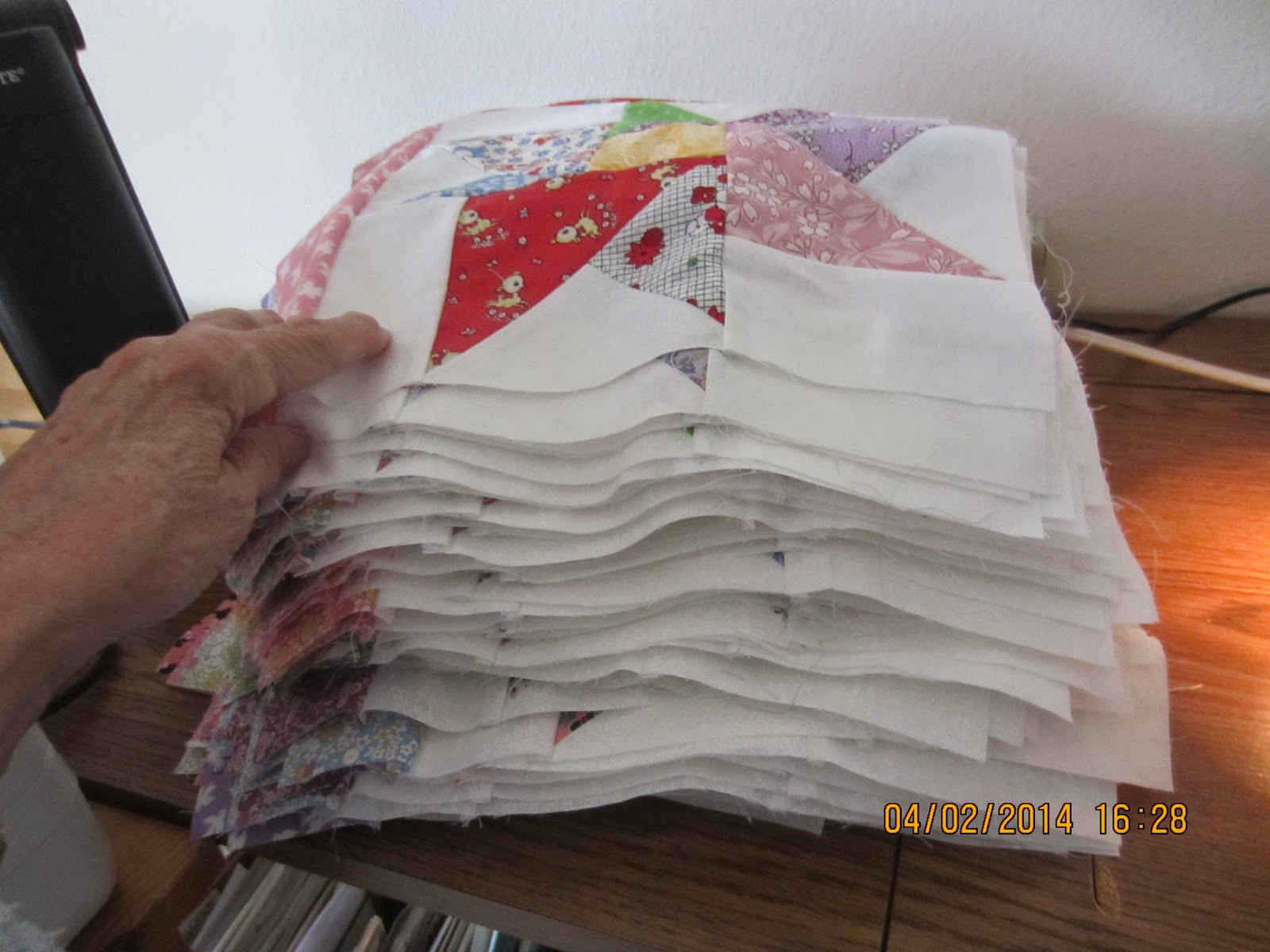 Since my sewing space is a bit tight, I decided it might be better to sew all the remaining blocks into pairs, which could then be added to the "threesies" to make rows of 5, 7, and 9.

When I quit sewing for the night tonight, I had all 6 of the 5-piece rows ready for their last sashing strip. However, see my comment about tight space up there--there's really no place to put things so that I can reach the sashing strips right now! So I guess I'll keep sewing till all the strips have 5 blocks, and then I'll be able to access the pieces I need.
Hopefully the light tomorrow will be good and I can lay out the strips I have done for a preview. Then there's the little matter of locating the white fabric I had cut for setting triangles--oh, and of course, the other set of 150 blocks. 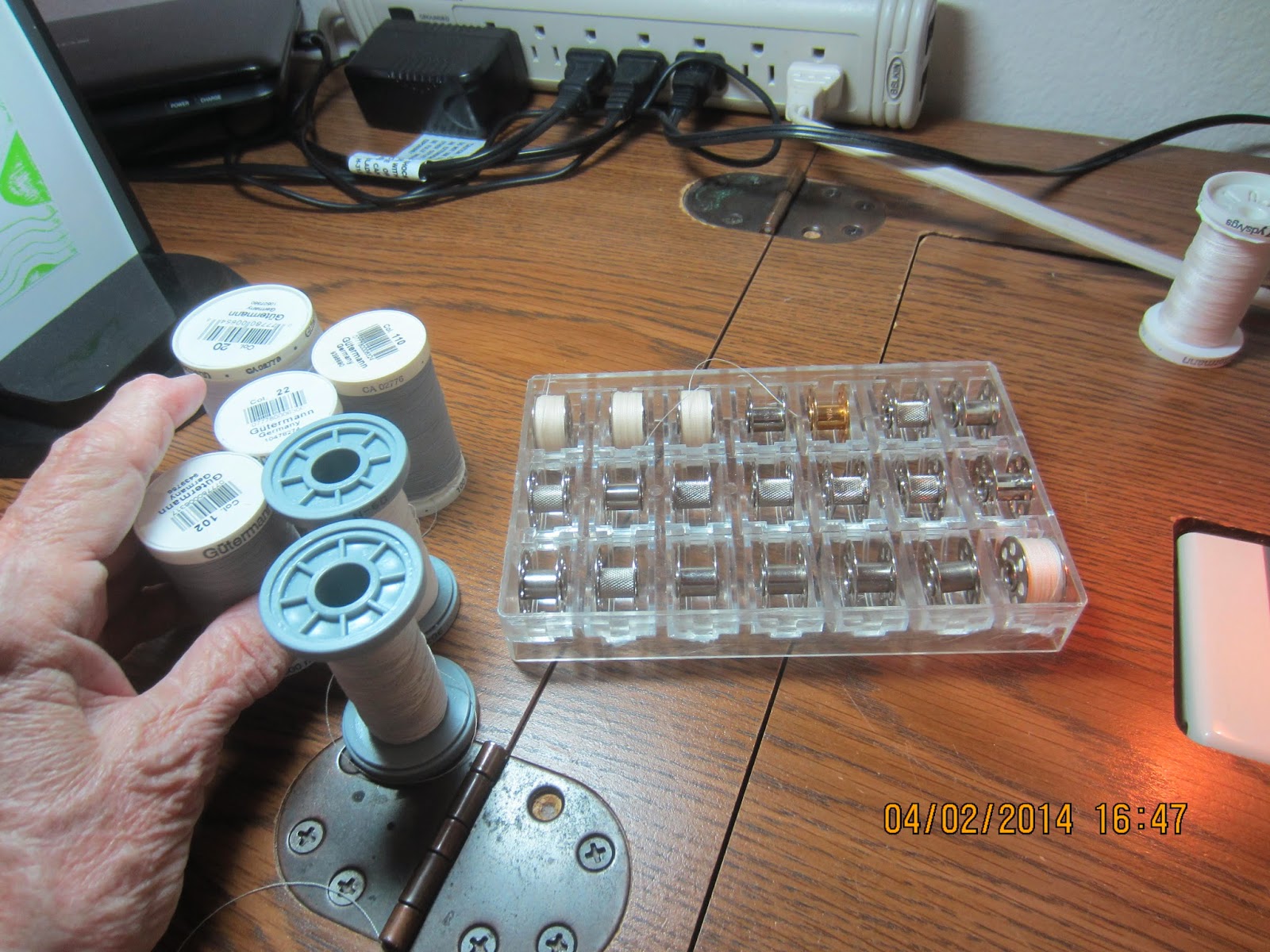 I'd emptied all the bobbins I'd wound to take to Asilomar. Since there's going to be a lot more sewing in the near future, I went ahead and wound up another set of 21 bobbins.

One 500 meter spool winds 7 bobbins. You can see the attrition in the number of spools from the before and after pictures.

And yes, that's the space I have next to the machine to sew on. Even moving the Ott light all the way to the edge (not wise with cats that like to visit my work area) it's not much. 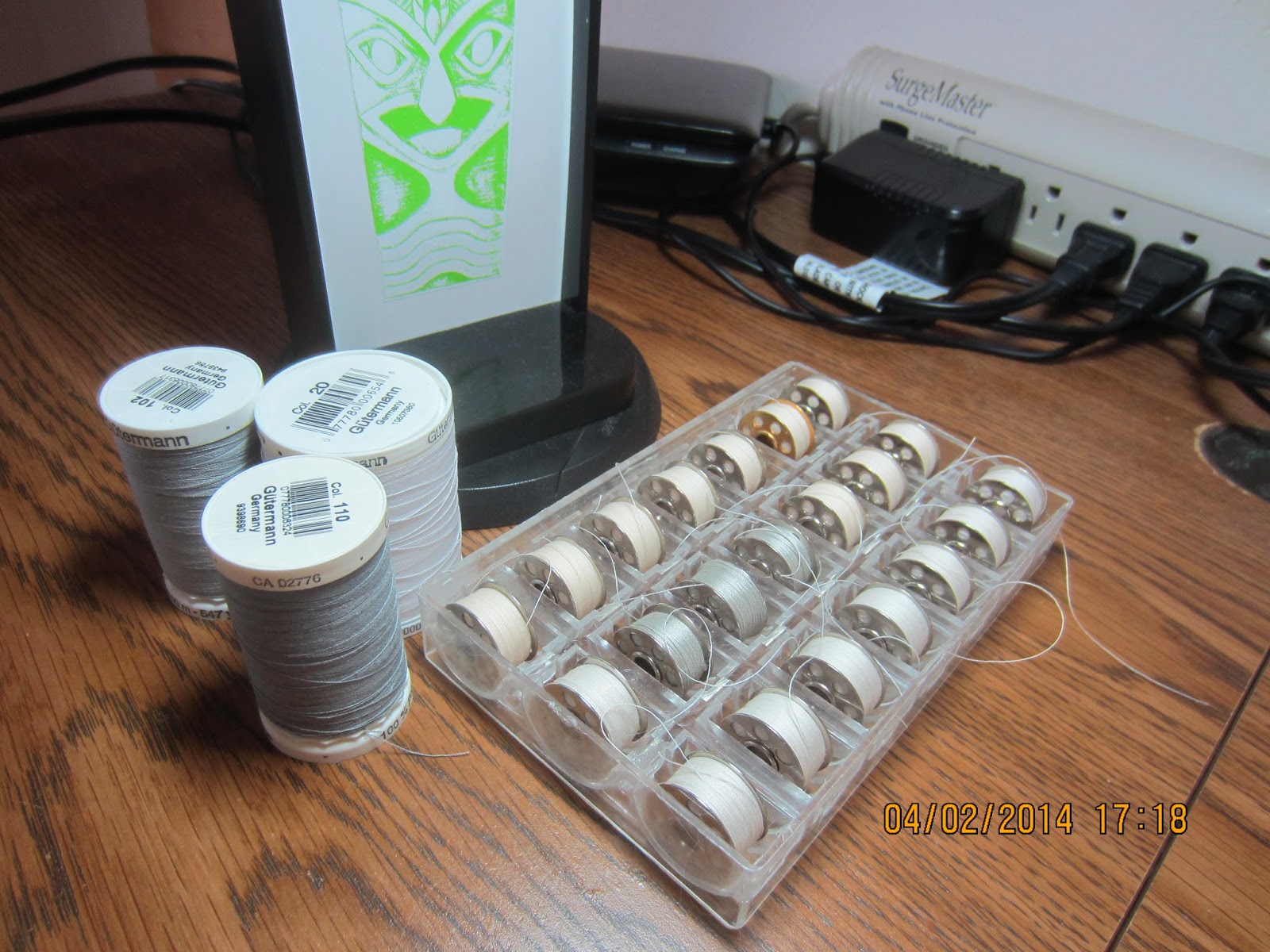 Maybe I need to figure out how to hang the power strip on the wall... that would free up some space, though not much.