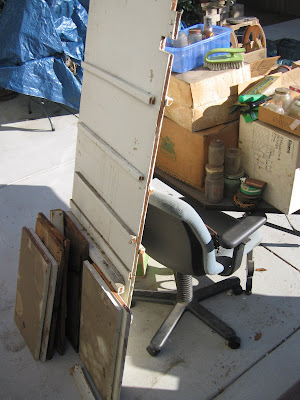 Just in case you wondered what a dismantled old pantry looks like, here it is!

The boxes are what was inside of it...well, some of it, anyway. A lot of it got tossed. I mean, do we think that 20-year-old shoe polish and fertilizer are still good?

If you think so, you're welcome to come rummage in my trash cans and fish it out. I'm getting so good at this tossing stuff!

I tossed all the old baby food jars with the rusted lids.

I tossed all the plastic flowerpots--the ones that were almost crumbling with age and decrepitude.

Tossed the rusty coffee can that was filled with filthy clothespins, too.

Tossed the filthy fishbowl, too. No fish for you!

The boxes of jars are going to go to the curb on Tuesday night, along with all those boards. If anyone wants to salvage them, more power to them. 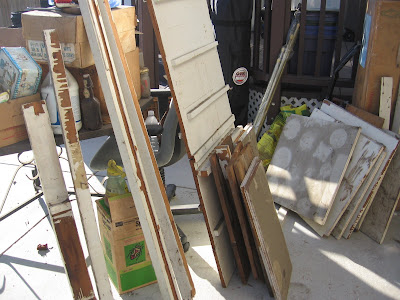 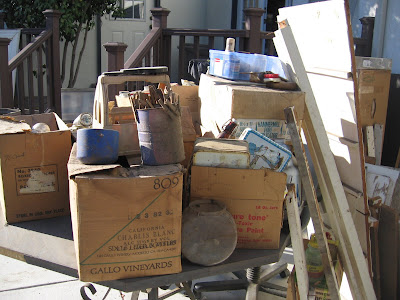 I'm not gonna do it!

We did keep the sprayer and the liquid-fertilizer/bug spray bottles. They might still work.

Kept the Christmas trees, too, including the 7-footer that I wasn't sure about keeping. Turns out, D4 thinks she can make it work. We'll see. I'm game if she is!

Yeah, look at all that. And I was told the cabinet was empty...
Posted by mehitabel at 10:22 PM 4 comments:

Don't see how I can possibly do 4 posts today, so I guess I'm going to have to give myself a big fat F for this month's NaBloPoMo. Sigh. Well, I had good intentions, and you know what those are good for.

Today is turning out to be a working day: I have a friend over w ho is tearing out an old cupboard. This monster was, once upon a time, the "pantry" adjacent to the kitchen. It is definitely a home-made, kluged-together thing, with doors that both swing in the same direction. It's almost 8 feet tall. We had it moved to the garage when we did the addition to the house--that was back in, wait for it, 1983.

It became a "garage storage" cabinet, filled with all kinds of detritus and miscellaneous garden stuff. All the poisons, for instance, lived in there--in '83 we still had a 5 and a 7 year old. I haven't had the nerve to crack open the door to this thing for years--ever since the day I opened it, found myself nose to nose with a huge rat, and slammed it shut.

Anyway, D4 and I decided that it made no sense to keep the space filled with a big old hulking thing that we wouldn't use, so it got slated for demolition. The only hitch is that she had told me it was empty--that "the guys" had taken everything out of it when we did the big garage cleanout. Hah! So B. has been emptying it, and has made a lovely big pile of stuff that I need to sort through (again? what's with all this decision-making anyway?) and toss or keep. Most of it will be toss, but some might just go onthe curb to see if anyone wants to recycle it. Tons of glass jars--baby food jars! Have I mentioned that my "baby" just turned **cough** over 30??

Maybe I'll try to get a couple of pictures of this stuff, just so you can feel the proper amount of sympathy for me. And especially for B. He, after all, has been festooned with spiderwebs most of the afternoon.

Why yes, when he's done, I will definitely buy him a steak dinner! After, of course, he showers...
Posted by mehitabel at 2:08 PM 2 comments: