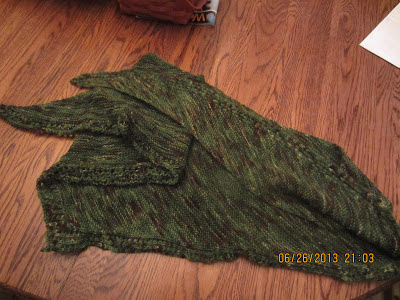 Today was knit group day and I had decided to only bring projects that were already in progress. So last night I went through the WIP bags and picked out a couple of likely candidates and tossed them in the tote bag.

Okay, so I brought five projects with me today to spend a couple of hours of knitting... but this one got done! This is my "Traveling Trillian"  which has indeed traveled the world with me! She's been to France and Germany, as well as Asilomar and many birthday parties, baseball games, and and and.

Came home to an un-cleaned house as my poor housekeeper had a flat tire and couldn't get it fixed soon enough to make it over...oh well, guess the cats and I will be good for another week! I managed to get a good nap in, as well as pressing a whole lot of squares for the pinwheel quilts. No pictures of those--just go back to some of the previous posts and  you'll know what they look like! 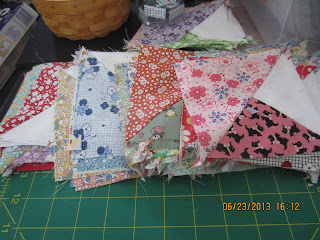 Catching up on the latest happenings around here. There's been a fair amount of clearing and picking up of "stuff" going on, to get ready for a visit from the housekeeper.

Never ever thought I'd be one of those people who "doesn't do her own housework" but here I am. One of Meg's dicta when we got the house renovated five years ago was that we'd get someone in to do the heavy cleaning every so often. After my back injury,. surgery, and the extended recovery (if I'm recovered why am I still in PT?) it's become a necessity. 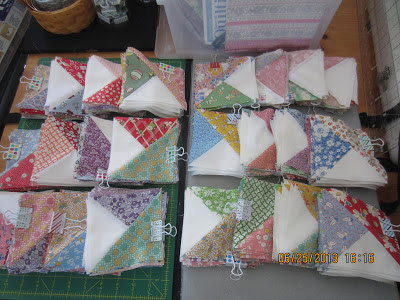 And there are only 2 cats in residence here with me, but the two of them can make more messes (and fill more litter boxes) than it felt like with 5.

But, I have managed to make some progress on the pinwheel quilts! The top photo is what the stack looked like on Sunday...and the next photo shows all 585 blocks, neatly trimmed, lined up in sets of 25. The top right set--you can barely see the little red clippie--that has only 10 blocks in it.

They've been settled into a clear bin to await the next step. Aren't they cute? 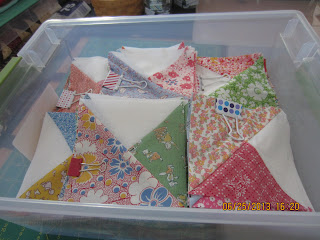 I've also begun to cut the many many setting blocks that will be needed. I did make a connection today, though, that I think will help. The shop has a strip cutter, and if I cut the white fabric into appropriate sized chunks, I can use the cutter to get my 2.5" strips done.

Let's see. 585 blocks, times 2, so 1070 setting blocks. I think I can get 9 out of a strip... yeah, I'll need a lot of strips! Still considering whether to precut them to size or lay the blocks on the strip to sew them. Probably will precut. 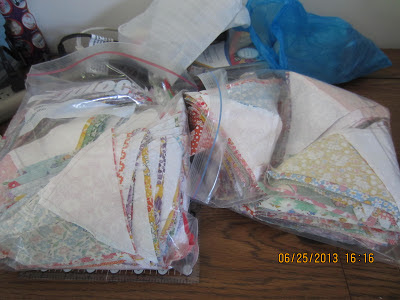 I actually packed them up and took them with me to class tonight, just in case I had a few minutes free to press and cute. Yeah, not so much.

It turned out to be a pretty busy night. We have a very new quilter who is making a quilt for her boyfriend. She picked some really interesting and funkily modern fabrics, and she had the top mostly pieced tonight. So she got the top put together, the back pieced, and managed to get the whole thing pinned. Next week she'll do the quilting. I had an inspiration--one of the fabrics she liked and was considering for the back has rows and rows of wavy lines made up of dots. So I suggested she pin the quilt "upside down" and quilt it from the back, following the lines in the fabric. I think it will be relatively easy for her first quilt and it sure saves a lot of marking! Hoping to get pictures next week. 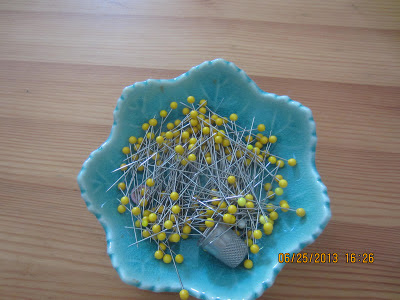 Today's Photo A Day word was "sharp" and I don't know of many things that are sharper than quilting pins..

These little yellow-headed demons have certainly drawn enough blood from me!

The dish has magnets glued to the bottom so they don't go flying all over when I pull one out to use it. The thimble just likes to hang out there. 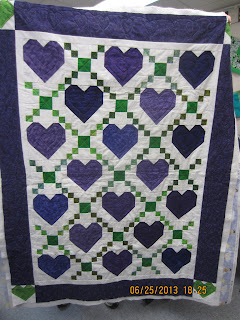 This is Anne's quilt for her new great-granddaughter. (At least I think it's only one great. It's complicated.)  I think the hearts look terrific in purples and greens!

She had it all quilted and put on the binding tonight.

The next picture is the back of the quilt. Cute lavender print, and  you can see the quilting design better there.

By next week the quilt will have gone to its new home, but with any luck she'll take some pictures and blog about it. 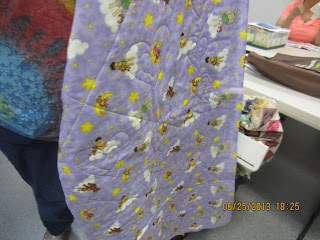 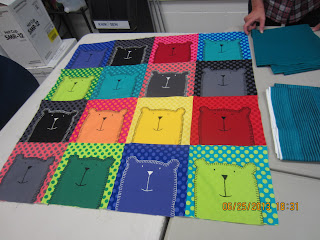 Finally, there is Rochelle's little bear applique quilt. She's never done hand applique before, nor really an embroidery, so this quilt was a great learning piece for her.

She picked out all the colors of the  bears and the polka dots. The two fabrics next toit are the border (top) which is a solid jade green, and the back, which is a stripe.

So that about wraps this up. I do want to mention that three of the quilts you've seen on this blog--the red/white/blue Rail Fence with the little bikes and wagons; the red/navy/Yukata cloth one; and the Twisted Sister in blues and pink--have been sent off to Quilters Dream Batting Co. for their Hopes and Dreams Challenge. This link is for their Facebook page, where they show pictures of some of the quilts as they come in and some of the ALS patients who have received them.

Most of us know of ALS as Lou Gehrig's Disease, and the devastating effects it can have on a person. I have a dear long-time friend who now has it; I can't do much to help her, but I can take part in this project. I'm especially pleased since these three quilts are from the loving hands and hearts of my "quilting doctors" and I've been pleased to have the privilege of finishing them up and sending them on their mission of bringing hope and love and cheer to someone who needs it.

I'm also delighted to see that many of the quilts that have been sent are truly lovely. I deeply believe that a work of heart should be "the best" you can do, whether you're a master of your art or a struggling beginner. I was really crushed and rather heartsick when, working on a "charity quilt" day with a guild I then belonged to, I was told that the quilt I was working on was "too nice" to be a charity quilt.

Okay, off my soapbox. Maybe you'll be inspired to make a quilt for this project, too!
Posted by mehitabel at 11:47 PM No comments: