It's been kind of quiet here on the blog, for which I apologize! The sad truth is that I used to mostly blog on my desktop computer, because the laptop had some quirks (like erasing whole blocks of text if I tried to do something exotic like use the shift key) that made it fairly unpleasant to blog on.

Then the desktop died, and it was either use the laptop or the iPad. Both have their quirks.

Plus it's been a little busy around here, or I just haven't felt up to doing much.

Plus, my daughter is getting married in--let's see, 10 days!  I've also made a quick trip back East to see my granddaughter graduate from Brown, and visit with family and friends back there.

Including finding a couple of new quilt shops, and a yarn shop or two, plus a meetup at Webs with a long-time online friend. 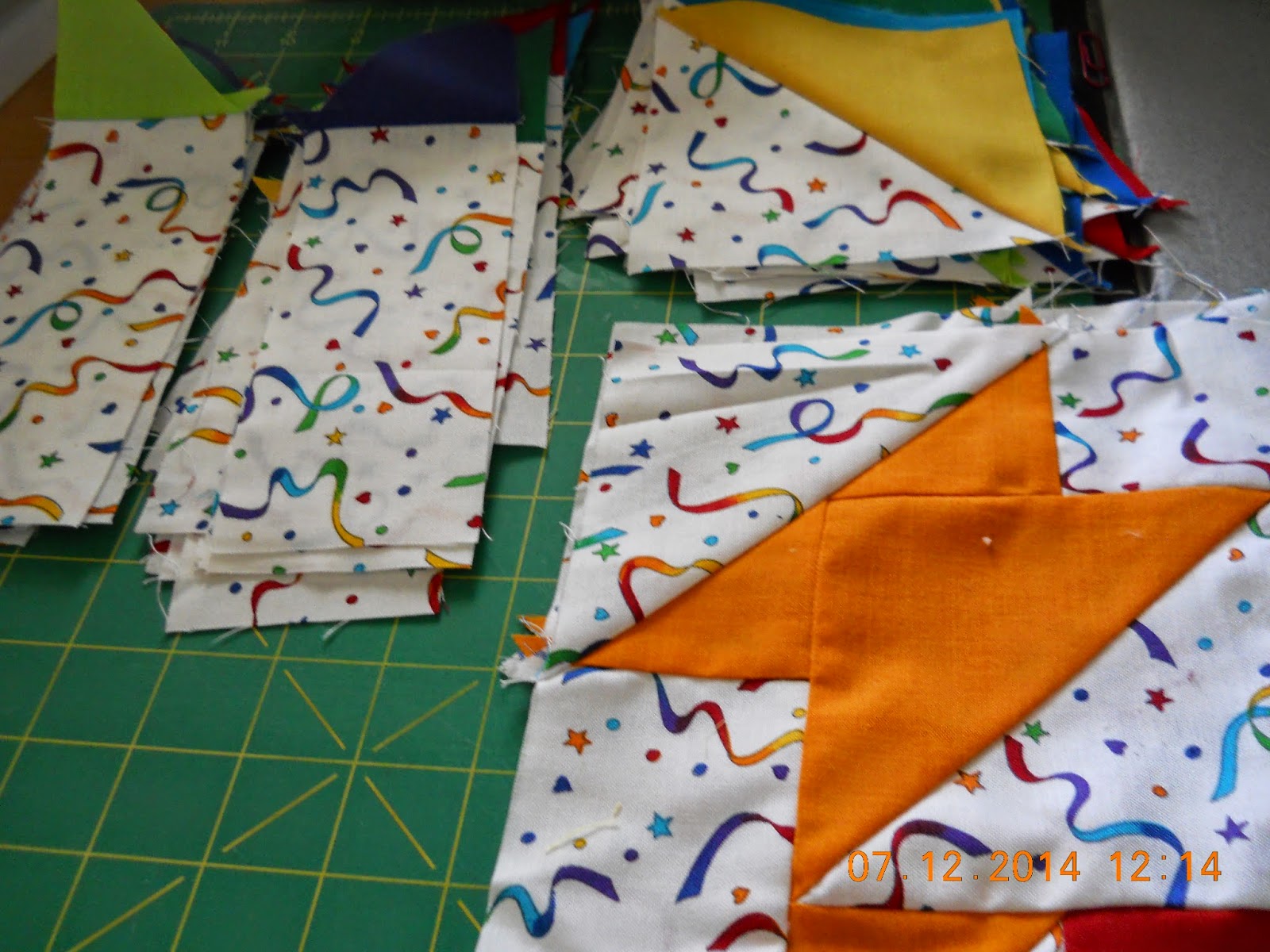 Plus sometimes there's a corrupted process that means my layout ideas go straight down the tubes. This seems to be one of those posts.

Anyway, enough kvetching! On to the quilting!

A slight inversion here as far as project continuity goes, due to (once again) the wonky way my pictures uI ploaded and have settled themselves. So first let's talk about the "new" project here.

I had been looking at a tub in the garage through which I could see this very celebratory-looking fabric, so I hauled it inside and checked it out. Oh my blueberries! Inside were all 6 or so of my Mary Ellen Hopkins quilting books, plus Judy Hopkins' Around the Block and a Trudie Hughes book.

Tucked into Judy's book were quite a few post-its with notes scribbled onto them. The piece of fabric turned out to be wrapped around a whole lot of cut pieces, plus two partially-completed blocks. I realized that I could easily put all these pieces together if I chose to-- I even found the page with the pattern. She calls it Grape Basket.

So I finished up the sewing on the borders for the pinwheel quilts (more on that below) and set all that aside for the massive pressing and trimming project entailed there.

And then I could play with the baskets. There are only 20 blocks, everything is cut out and they go together really quickly and smoothly.

So now I have 20 half-baskets done, and I'm busy working on the other halves to get everything done. Still deciding on a layout--20 blocks might work if I do one layout, but another (with sashings and cornerstones, like the pinwheels) will only use 18.

The thing is, I'm nearly certain that this was going to be 2 quilts of 9 blocks each. I've been able to date the contents of the box to 1996, and I think it was part of an Asilomar class with Judy. I used to go to Asilomar with a "friend" who always wanted to do what she called "team sewing" where we'd both work on the same project and finish up with a quilt apiece. This would have been really cool if she had done much sewing, but well, she didn't really. Lots of naps and time spent away from class. It took me about three nanoseconds to realize what was going on, but I enjoy sewing and it really is just as easy to do twice the sewing when it's easy chain piecing, or twice the cutting. We stopped going to Asilomar together when I balked at bringing her breakfast in bed every morning, and decided that a certain project was too complicated to make two of, and she had to start her own.

But that's a digression. Now I have twice as many blocks as originally planned, and I think this will make a nice quilt. If I wind up using 18 blocks on the quilt top, I'll put the two extras on the back. Problem solved!

Backwards to the pinwheel quilts. As I said just above, I don't mind doing a whole lot of sewing or cutting or piecing at a time, which is a good thing with these 6 pinwheel quilts! 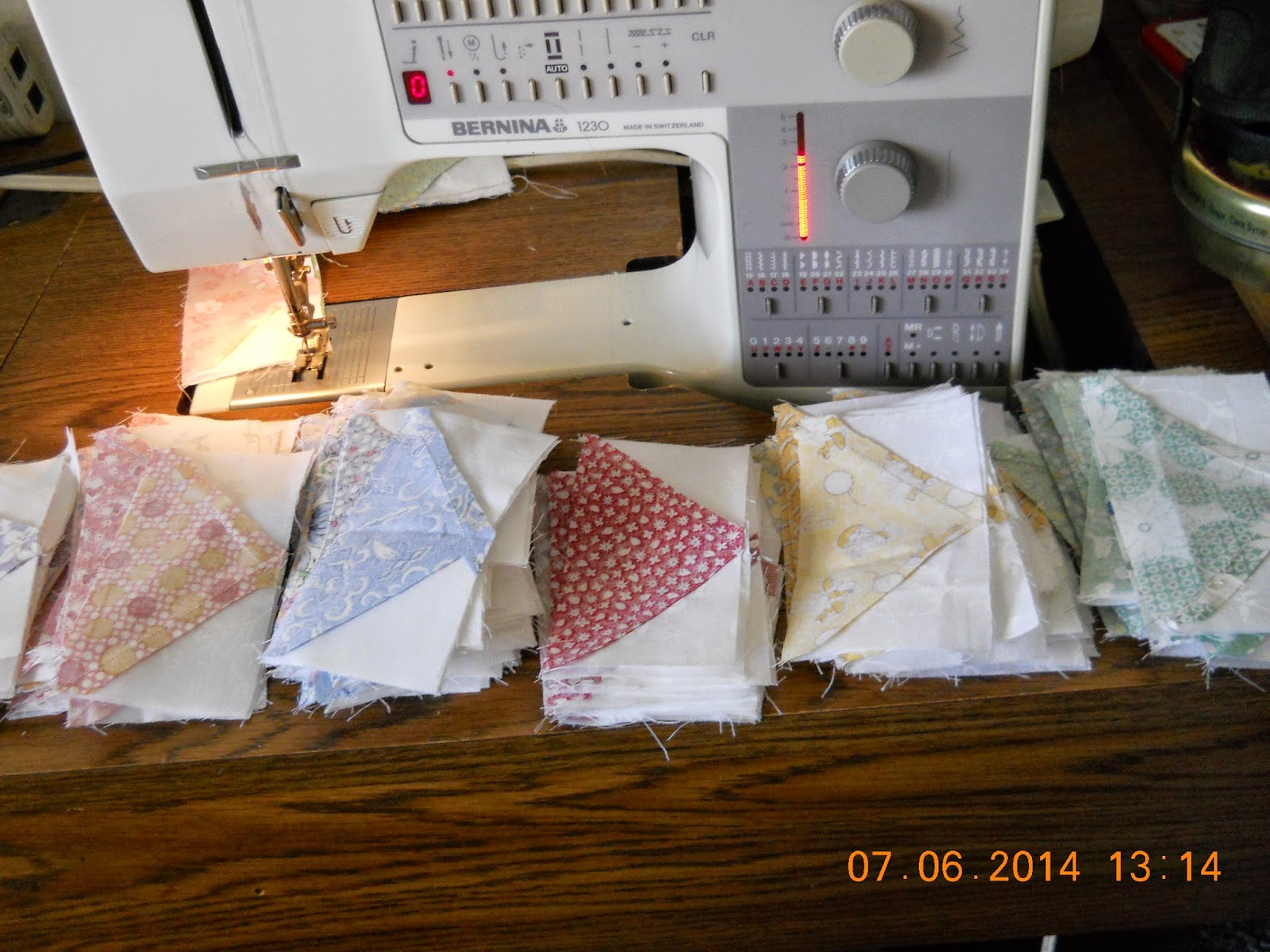 I decided that it might be fun to make a Flying Geese border for one of the quilts, since I had a whole lot of 2.5" squares of the white fabric already cut. I had cut a lot of 2.5" strips out of a "new" tub of 30s fabrics, so I cut a bunch of 4.5" rectangles and got to town on the sewing.

That's what Audrey is helping me with up top there. She and her sister just love my setup with the little travel iron--Abby was delighted when I brought out the mini pink applique iron, too! (They iron without heat.) 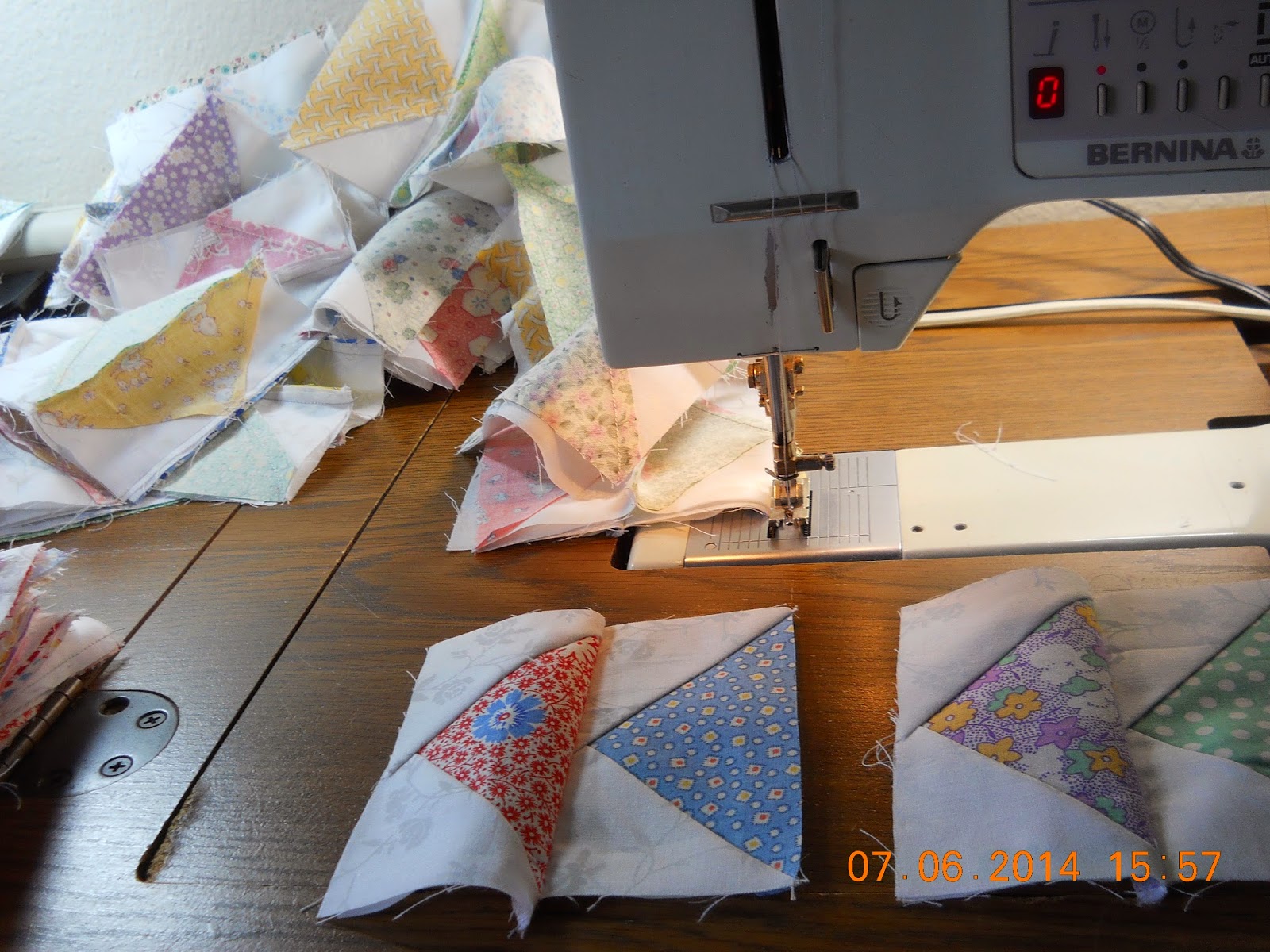 Now all the geese are done and assembled into 4 long strips, ready to be sewn on. Then I took all my random chunks of 2.5" wide pieces and sewed them into long long strips--these will be  borders for the last two quilts, and there's likely enough for binding for at least one quilt too.

So my rocking chair (the one next to the sewing machine) is piled with 6 quilt tops, and a whole lot of border pieces, waiting to be pressed and then trimmed down. 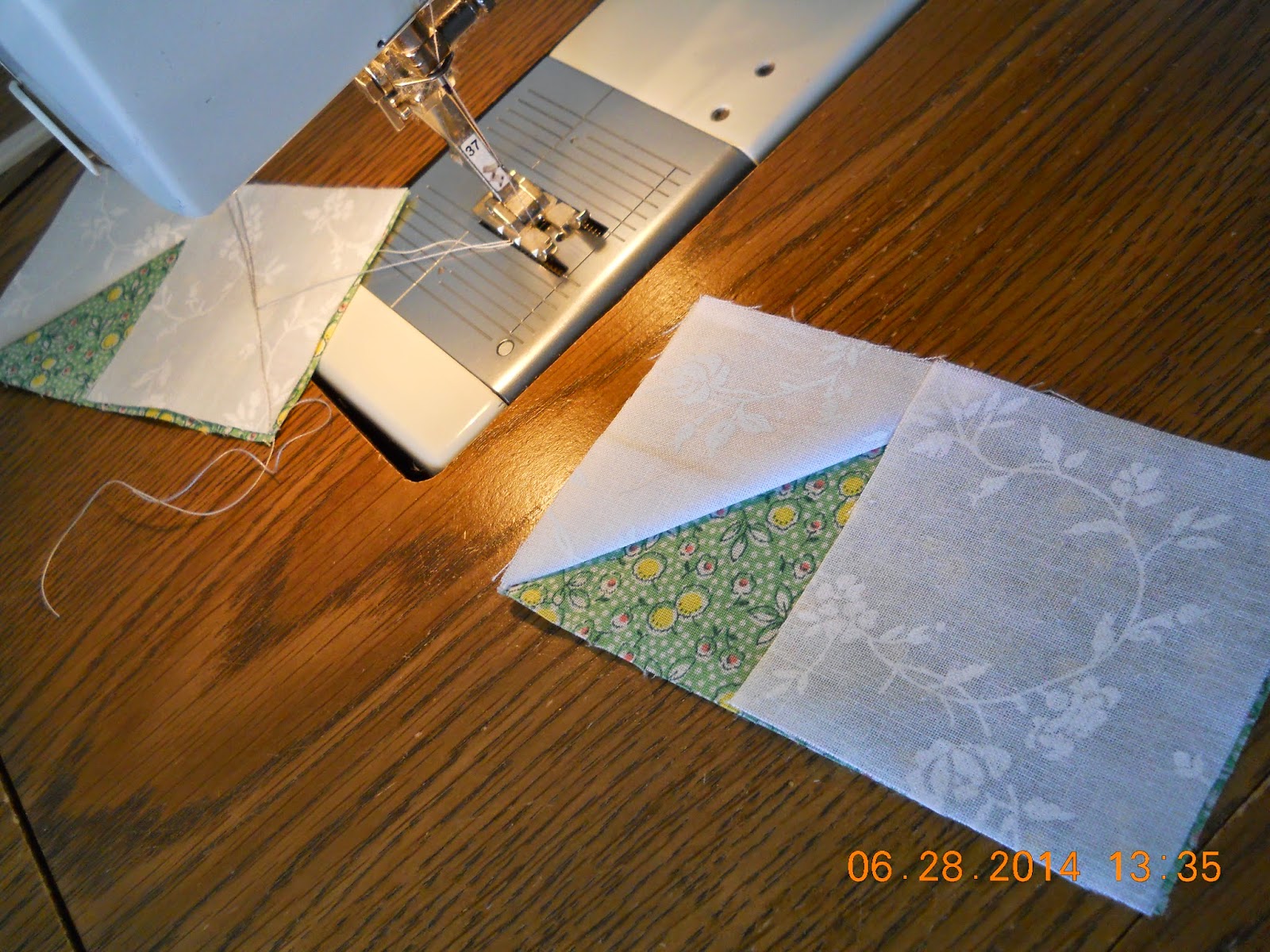 Sadly I've been having a flareup of my foot/back problems, so standing up long enough to press a whole lot of giant quilt (they are going to be roughly king size) isn't happening today.

Thus my rationale for letting myself work on the baskets! Not that I need to justify my choices to anyone but myself, of course, but there's a bit of Yankee conscience buried deep in my soul and that little voice that says I should finish one project before starting another one. 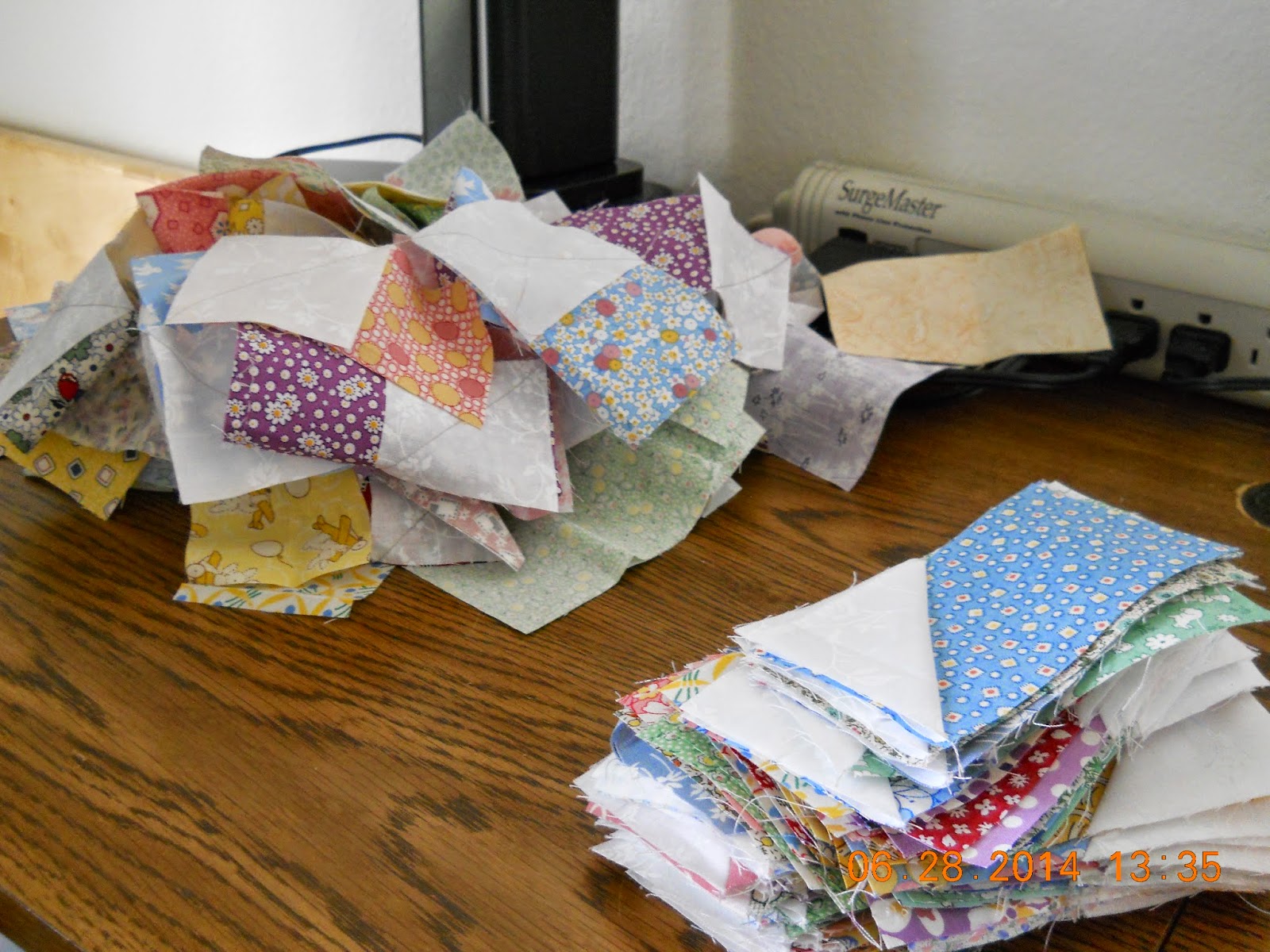 So this is where I am, piecing basket blocks and contemplating the easiest way to get all those pinwheel quilts pressed and trimmed and bordered so they can be shipped off to the longarmers.

While simultaneously getting ready for a wedding, which will involve most of the family converging out here. It will be so good to see everyone!

Probably a little bittersweet for some of them, since the Old Family Homestead is no longer there! 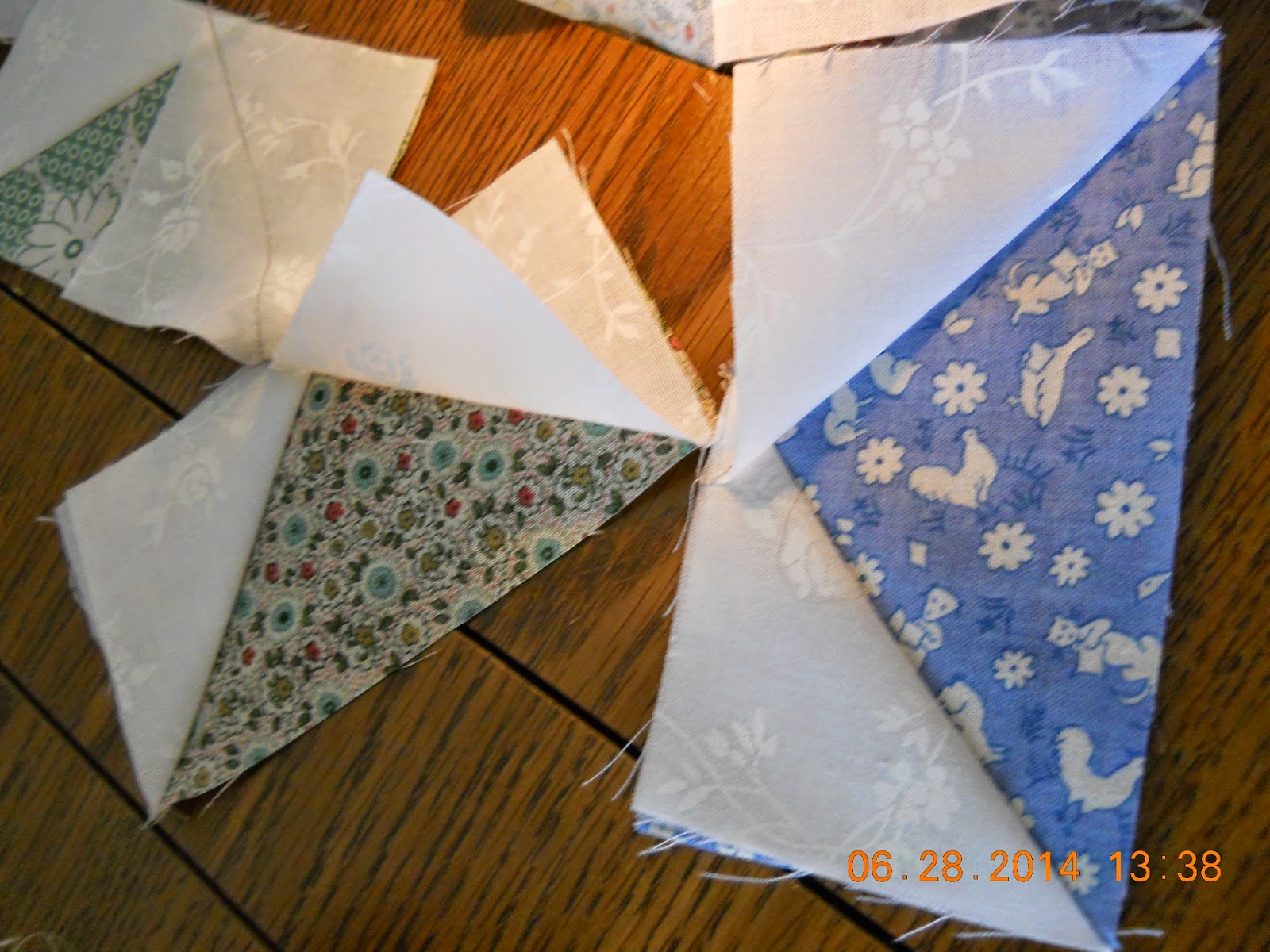 But that's a blog post for another day. Right now, there are baskets calling my name!
Posted by mehitabel at 4:59 PM 3 comments: