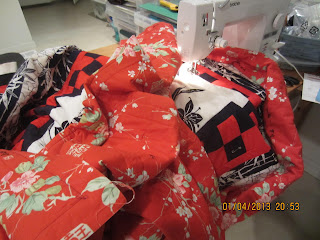 ...yes, I know that's the name of a magazine. One I rather like!

But today, I was the one quilting. Got the Brother threaded up--my glasses are awful for threading a machine with invisible thread, that stuff just disappears... but I managed to get it done. This quilt needed some more vertical lines quilted, so I thought doing that would be a good way to get used to the machine. This is a new machine, a semi-industrial type that sews straight stitch only, and can go very very fast. Unlike my mother's industrial machine, on which I learned to sew, it does have a reverse so I can back  up if I need to. Not that I need to very often, but it's nice to have it. Very handy when sewing on binding. 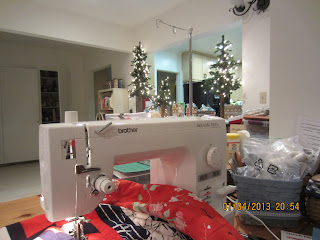 This is the machine I used to sew the binding on this quilt and its counterpart. It already had the walking foot on, and I really do want to become proficient with it. I've learned that for me, the learning curve on something new--a new technique, a new machine, whatever--just can't be rushed, and once I accepted that, I've been a lot less frustrated with myself. (Not that I don't occasionally slip back!)

The plan for this quilt is to do straight almost-ditch stitching on all t he vertical lines, including the bamboo stems in two of the yukata prints. Then I'll free-motion the center panel, and  probably add some free motion work to the bamboo panels too. The batting is Warm n' Natural, so it doesn't need to be quilted too closely, so I'm not going to try to do the horizontal lines on the block strips.

So the quilting session went along quite nicely, interspersed with jaunts out to the garage to wrangle the laundry. Then things started to go a little wonky--first, I ran out of bobbin. No problem, had another one ready to go. Then the top thread broke, and for the life of me I couldn't get the needle rethreaded.

Took that as a "sign" that maybe it was time to quit for the night, so I've shut down and put it to bed for the night. Hopefully tomorrow morning my eyes won't be too tired (and my fingers too large and klutzy) and I can once again get the needle threaded and get back to work!
Posted by mehitabel at 9:41 PM No comments: 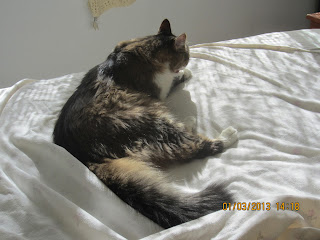 ... can  have a way of going pear-shaped and toppling over in no time flat!

Today's plan including changing the bed sheets, doing some laundry, and hanging out at the sewing machine, working on some of those quilts that I've been talking about working on.

Because talking about them doesn't accomplish much, other than making me feel bad about not, actually, working on them.

Started off the day okay. Got the bed stripped, much to Hi Hi's displeasure. 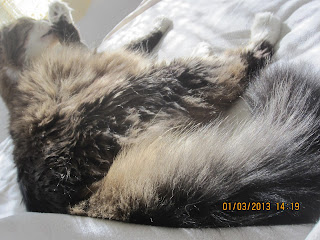 He had been comfortably curled up in a nest of quilts, and resisted quite strenuously as I attempted to wrest t hem away from him.

It was a battle to get the sheets off, too, but I am still bigger and stronger than he is... and I know how to lure him off the bed by waving  the brush at him. He loves to be brushed!

So here he is, getting himself all ready for a nice long nap in the sun. I do like the way the sun throws shadows through the lace curtain to make patterns on  the bed. I was also trying to get the sheen of his fur in the sun. He still has a nice thick luxurious coat, but it's not nearly as when he was younger. Still, he's looking good for an old cat! 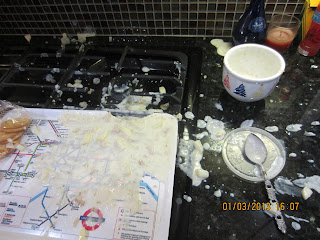 And this is how the rest of the day went... tried to heat up some chowder for lunch, used the microwave instead of dirtying a pan. Great idea...except. The bowl slipped out of my mitt-covered hand, dropped onto the tray, chipped off a chunk of the tray and splashed EVERYWHERE. At least the bowl survived--Fiestaware is pretty tough, and it did land on the plastic tray rather than the stove or the granite.

Now I've finished cleaning up the mess, heated up the last serving of chowder in a pan on the stove, and t he laundry is chugging merrily away out in the garage. No quilting has been attempted, though--it's been "one of those" days. When I was trying to upload my pictures, I got a message from the computer that it didn't have enough free space to upload them! Three pictures and there was no room? So it was  housecleaning-the-disk-drive time, and now it's almost dinnertime.  Going to (gulp) reheat the leftovers from last night's chicken and dumplings, and hope that they, too, don't wind up all over the outside of the stove instead of inside me.
Posted by mehitabel at 5:41 PM 1 comment: 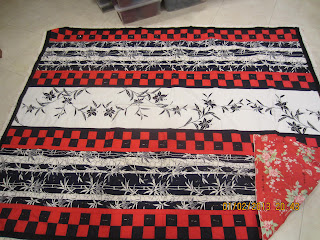 After listing all my UFOs (well, as many as I could lay my hands on fairly comfortably in the last couple of days) I decided that perhaps I should actually,  you know, maybe start doing something to them?

Does taking their picture and blogging about them count? I hope so--at least, it's provided a wee bit of motivation!

These two quilts are listed on the UFO list on the sidebar as "red white and blue" quilts, but they have some history to them.  If   you've been following this blog for a while, you may remember my "quilting doctors" from several years ago. Both retired--he was a pediatrician, she a pediatric nephrologist--they'd taken up quilting as an activity they could both enjoy and do as a team. It sort of worked out that she sewed, he cut and pressed and pinned. I "consulted." 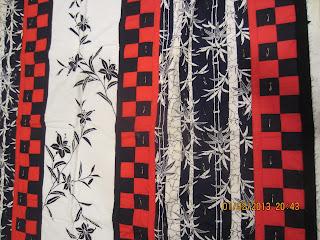 After Hurricane Katrina, moved by the plight of the displaced dialysis patients, they began making quilts to send down to their colleagues in the affected areas.  A group of us would get together and team-sew, producing a lot of quilts out of our "ugly fabrics"--lots of scrappy Log Cabins and 9-patches and Yellow Brick Roads.

These were a couple of the last quilts they worked on together. When they knew she was dying, they passed their fabric and projects along to me. Both of these quilts were already pinned and ready to be quilted, so of course they moved to the top of the list. I took them with me to Asilomar last year for the machine quilting class I took with Sue Rasmussen, and got quite a bit of quilting done on both of them.

The top one was a surprise--I hadn't opened it up, had just seen the back and could tell it was pinned and ready so when I did finally unfold it and saw t he wonderful Yukata cloth bands, I was delighted. I think those bands will lend themselves to some nice free-motion work. Well, we'll see how nice my free-motion quilting can get--it's been a while since I did much, although during that week I found that yes indeed I still remember how to do it!

So that's project #1--you probably can't tell, but I have sewn the binding onto it already, since the edges are all quilted. It mainly just needs the free-motion work on the Yukata, and of course sewing the binding down.

Here's #2--also in red/white/blue though quite a different feeling to it! 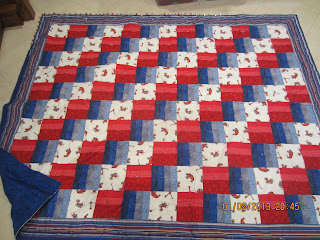 If you look at the picture in a larger version,  you'll see that the binding is about 1/3 sew down and there are binding clips holding it in place. I love these little plastic clippies--no more punctured fingers from pins, no more pins falling out all over the place for the cats to chase and bat and hopefully not eat!

I took a close-up so you can see the cute print and the stripey blocks.  I guess it's a variation on a Rail Fence, and the striped border fabric is mitered. I started by quilting this in the ditch along the block lines (which is what I was doing with the other quilt as well), getting it anchored down. I'll probably do something with the print, maybe echo-quilt the little wagons and bikes and cars and things. 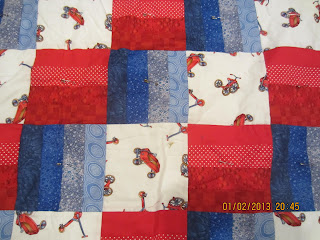 So, thanks to Anna at Woolie Mammoth for the inspiration/encouragement to get busy on these quilts!

Now, if you'll excuse me, I think I'll go sew some binding tonight. I haven't forgotten about the little sweaters; the lime green one--Abby's--is only about 4 loooonnnggg rows from being done with the knitting. Then some hand finishing, buttons, and on to the next one. It's just that it's kind of a chilly night and the thought of sitting under a quilt to keep me toasty while I sew is very appealing!
Posted by mehitabel at 8:50 PM 1 comment:

A New Year, A New Accounting 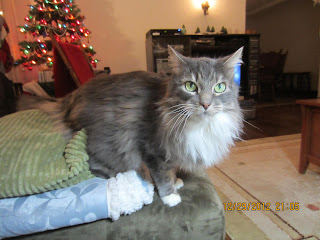 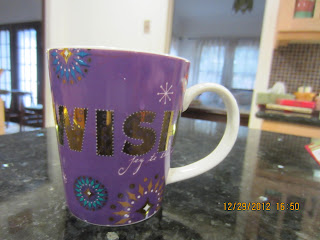 My lists of WIPs has been updated over there --> on the sidebar, and just for fun I listed as many of my FOs for the year as I could recall. I'm sure there are more, as I seem to recall binding off several things and of course the quilts had a little help from the nice folks at Cloth and Quilts, who longarmed 8 quilts for me. I could get spoiled with this whole quilt-by-check business. Well, except for the "writing the checks" part.

All this accounting is part of my accountability project. I have a LOT of yarn and a LOT of fabric, as well as a LOT of other craft materials and projects around the place. So it really makes a great deal of sense to work on what I have, instead of acquiring new projects and letting the old ones slide.

What a concept, huh?

When I listed the quilts, I made a note of what stage they're in. Hopefully I will be able to remember how to make the necessary changes when I finish something.

And I will finish something. Honest.

For today, I have one project (the Cedar Leaf Shawlette) that I'm going to cast on--it's kind of a tradition with one of my Ravelry/FaceBook groups, a way of affirming that yes, indeed, I dan start and finish something this year. I'm also hoping to finish up another project--Abby's green sweater is only about 5 rows from completion. Which will include weaving in a lot of ends, closing up  the armholes, and sewing on buttons. (Uh oh. Where will I find buttons? Oh yeah...) 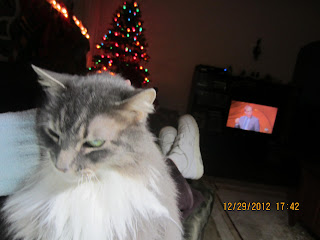 So here's a toast to this year's wishes--health, happiness, love and joy and all the good things of life!

PS--Don't know if I've posted much about Shyla before. She came to live with me about a year and a half ago, and she's been a "hidey" kitty for most of that time. She's begun coming out for pets and this week she actually came out and climbed on my lap while I was knitting! Now, if she'd just learn to tolerate HiHi a little more (he has a scabby ear from their latest set-to) we'd have a nice little happy "family." Poor HiHi misses his buddy Simon a lot (well, I do too) and he really wants a cat buddy.

Maybe that should be Shyla's new year resolution?
Posted by mehitabel at 1:08 PM 2 comments: