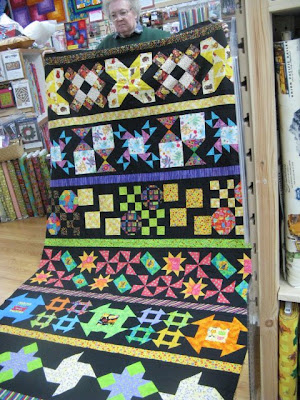 Just been a little busy and a lot tired from all that effort getting rid of the remainder of the debris from the old pantry.

Took the trash guys a week to take it all, and there is still some left in the back. After the rain today, there will also be some soggy cardboard.

Some of the tired has to do with health issues--no big surprise, I'm anemic again. Low hemoglobin, very low iron saturation levels = a very low energy mehitabel. Not what I needed at this time of year, but paradoxically, just getting the diagnosis has lifted my spirits.

Otherwise, I just feel tired and draggy and lazy and good for nothing, and start worrying that I'm getting too old and maybe I'll never be able to do anything, ever again. Once I know there's a "real" cause for it, it removes all the self-flagellation. Or most of it, anyway.

So, I'm back to blogging, although this post may be truncated since I'm hearing little sounds that tell me that "someone" is awake and playing, and not napping. 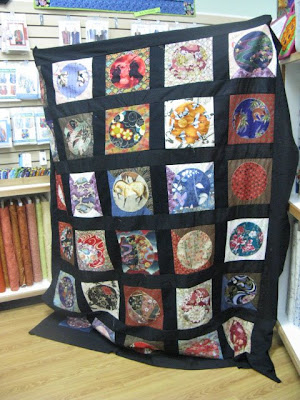 I'll start with the quilts. These two finished tops were presented at the last class--Anne's is a "row robin" quilt that her mini-group has been working on all year. Basically, each person did one row and set the specs for her own quilt: Anne's was cats and brights, with black. After being passed around in a brown paper bag each month, the quilts have finally come home to the original owner, ready for backing and quilting and binding. You can see more of these at Amy's blog. Ummm, Flickr page! 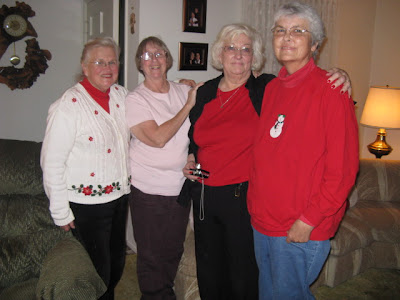 Yeah, our "babies" are now in their late 30's/early 40's. But we've been getting together for lunches and dinners, and the kids' weddings too, all those years. Doesn't seem like it has been that long till we look at some of our earlier group pictures.
There is a fifth member of our little "posse" but she moved to Nevada a few years back, and isn't able to come out as often as we'd all like.

Speaking of friends from Nevada, my pal SH came out for a quick visit last week. We took a day trip down to Roger's Gardens in Newport Beach, which was great for getting us into the festive spirit. 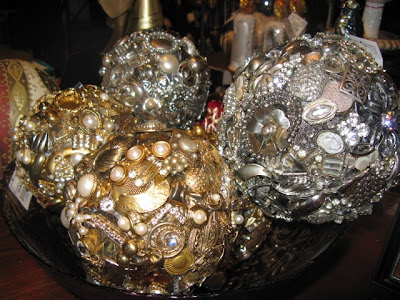 I took a picture of these ornaments because they were so unusual, and also because as the proud possessor of many many MANY buttons, it seemed like a good way to use them. Now, these are not hanging ornaments--at all. They weigh a ton each.
(This is where I stopped and put up the post when it was time to come home. Sorry. Now to resume.)

Anyway, if I were going to make some of these, I'd use fancy buttons and probably figure out a way to wire them into a styrofoam ball. Since I couldn't even lift the largest of these--seriously, it was that heavy--I see no need to reproduce them exactly! 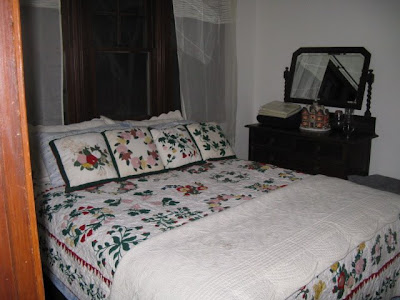 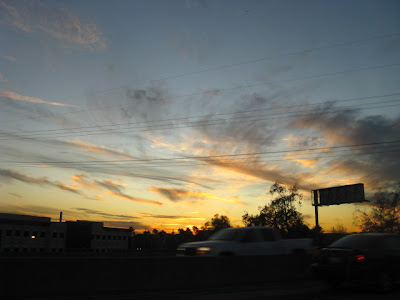 I've been trying to get into the holiday spirit. One room is almost ready, and with a little judicious camera-angling so you don't see the boxes in the closet--here's the guest room!

Yes, I do have two more panels to fill in that space in t he window--see the white blur on the dresser? That's them. Just need a little ladder or a tall person to fix it up.

But at least it looks festive and pretty in there! I figure that q uilt ought to be good at least through Valentine's Day, don't you think??


Finally, I had to take this shot of the sky out of the window of my truck. No, we were not moving, it was one of those days when traffic is stalled so at least I got something good out of it.

Even made it home, eventually. Today has been a rainy day and predictably the freeways are a mess. I did make a good choice, though, and took the 210 home since I needed to go to Target (no lights for the tree, oh noes!, and T. has t hem on clearance). Since the 10 flooded somewhere around Baldwin Park, traffic was backed up clear over Kellogg Hill. I would not have been happy about that, since apparently my truck's heater is on the fritz. One more thing to fix!

All right, now my intentions are good. I will blog again. Soon. Promise!!

and Anonymous, thank you for giving me a burr under the bustle...
Posted by mehitabel at 2:03 PM 9 comments: