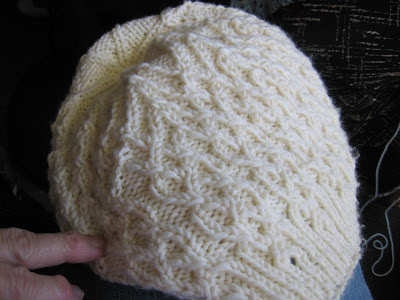 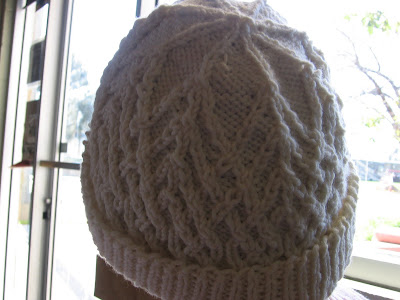 It's done!
Happy dance--my Shedir, the OOPS KAL for the month of January, is done.


The good news? It's not my first FO of the year.

But isn't it purty?? (Ok, I don't know where the bad spelling has come from. I SO don't talk that way!) 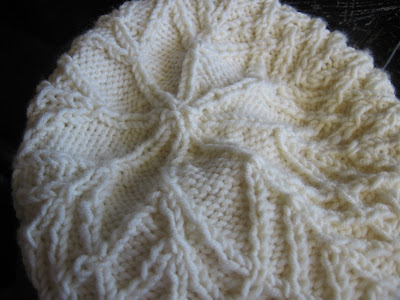 Look at those little decreases. When it's on a head, it really doesn't look that pointy.

Pattern: Shedir from Knitty.com
Yarn: Berocco Pure Merino in ecru, 2 and a skosh skeins. Love the color, love the texture. It is a bit splitty to work with, though, especially with the super-pointy Knit Picks needles. Size 3. Only did 3 pattern repeats and it's more than big enough. Might have to do another one, go down a needle size or two and see what happens.

Blogger is playing games with me, so you'll please have to make allowances for the rather wonky layout today. The next picture should be the Jiffy Comfort Shawl--but it might be Anne's quilt instead.
I guess I'll find out when I hit "publish" won't I?

Anyway, the shawl is my first FO of the year, and the first of the MP08 goals to be crossed off my list. Almost 6 skeins of Lion Brand Jiffy, in two different but semi-compatible colorways--the yarn had some old Wal-mart labels ($1.27) on the bands, and since I have never bought yarn at Wal-mart (I've been inside one exactly once), I figure this is a yard sale or similar purchase. Or a "legacy" from someone else. The completed shawl is about 6' long which ought to be enough to wrap around someone who can use its comfort and cheery coloration. 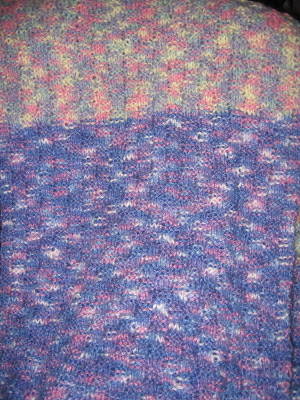 I do think the color separation is more obvious in the pictures than in real life. 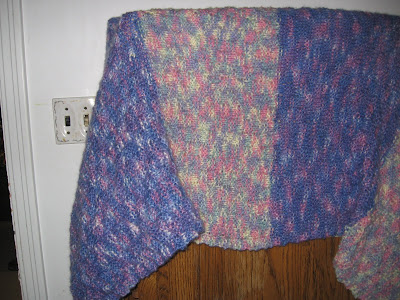 The floral multicolor is a charity quilt for our guild--the fabrics were a packet of pre-cut rectangles. She trimmed them all to the same size, added "windowpanes" and assembled it. She got most of the quilting done on it at class on Tuesday night.

As well as sewing the binding down on the lavender quilt, which is going to 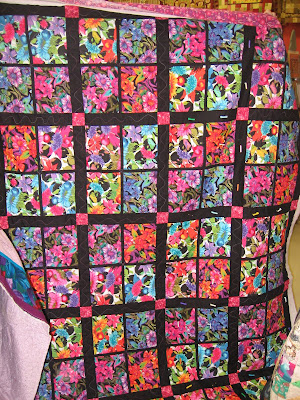 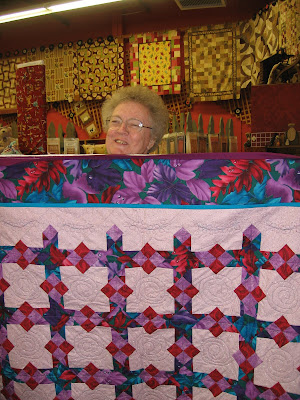 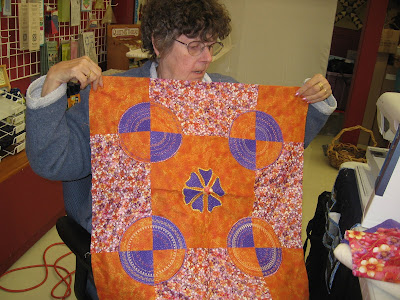 a benefit auction for her community, I believe for Cinco de Mayo.


Gail was working on this wonderful wall hanging. The circles are machine-embroidered and then appliqued to the blocks; the center block is also appliqued. 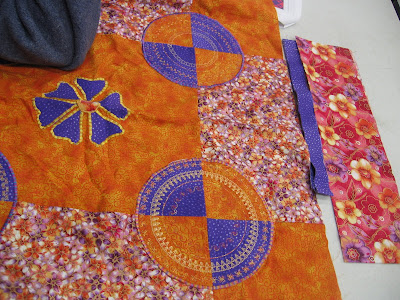 Here's the layout of the borders, ready to be assembled. 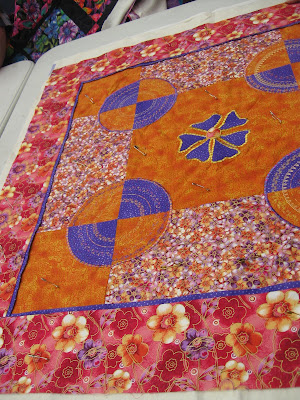 And here it is, at the end of class, bordered and with a narrow fillet of piping, pinned and partly quilted already.

She's going around some of the flowers in the outside border, which gives a nice effect especially on the back.

Made for a very productive night! 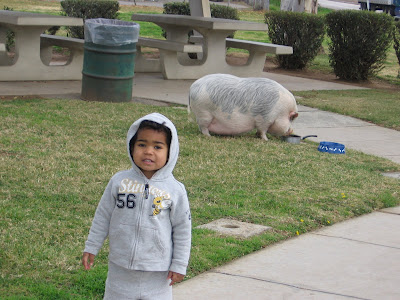 Spotted at a rest stop on the way home from the out-of-state trip:

Who on earth travels with a pig in the camper?

Yes, it's a pig. At a rest stop. Eating out of a saucepan.

Another view of the piggywig: 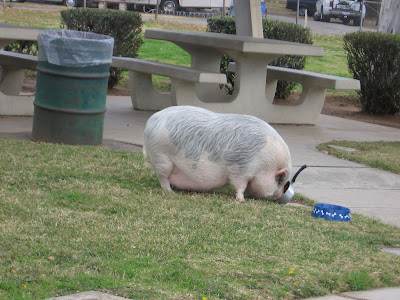 Garrett wasn't quite sure what to make of it, but he certainly took it in stride much better than the older folks.
Oh, it was cold and windy. Very windy. Very chilly, and we could see the mountains (Big Bear/Arrowhead area mountains) which were covered in snow. But the weather held, and we made wonderful time, and got home just before the deluge hit.

Nate has been held and cuddled by his aunties and uncle and has met his cousin Audrey--it was a mutual oblivion-fest. Just wait till they are older, though! As the 12th cousin in our family, he has lots more family to meet--and we know they will love him as much as we do.


Warning: if you haven't yet received your BMFA STR shipment yet, don't keep reading. 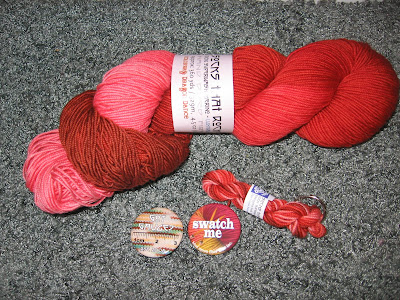 Probably love it too much to make socks out of it... but isn't it purty??