It Was a Party!

Just got home from partying heartily with the quilt guild members. Tonight was the guild's annual holiday dinner.
Here was the centerpiece for our table: 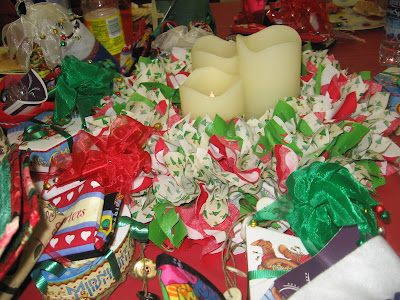 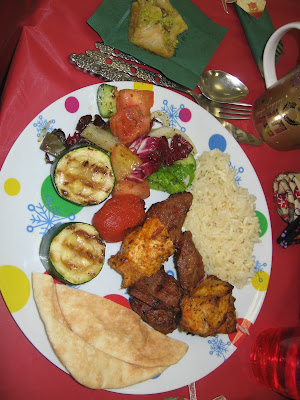 And here's dinner. Provided by a Mediterranean restaurant. It was pretty yummy.
I'd have enjoyed my baklava more if the nuts had all been shelled. Luckily I am a cautious nibbler where nuts are concerned, so I caught it without having to break a tooth.
We all brought fabric postcards to share. They were quite interesting--some of them were more "postcardy" than others.
After dinner, we played a game with them which involved passing them left and right and getting thoroughly confused. That way, we wound up leaving with a different card than the one we'd brought. 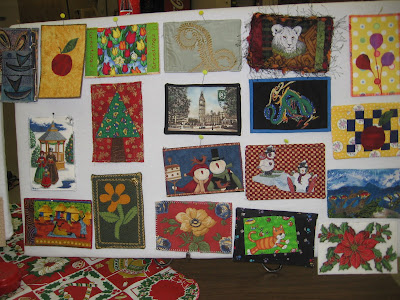 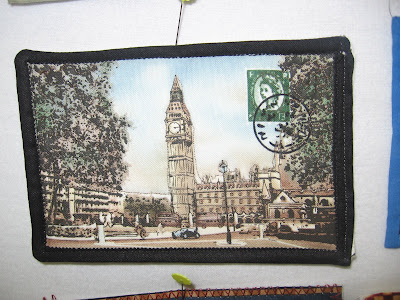 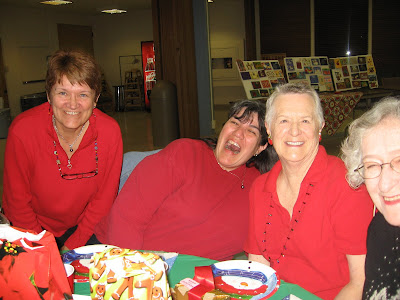 Some people had more fun than others.
(This group is saying Hi to Amy!)
So is the next one. 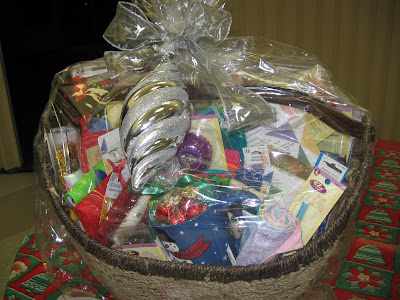 There were prizes, too. Each table contributed a basket full of quilt-related goodies.
This is the one from our table.

There are pictures of the other baskets, as well as other table centerpieces and more postcards on my Flickr page--click on the badge on the right to get there. 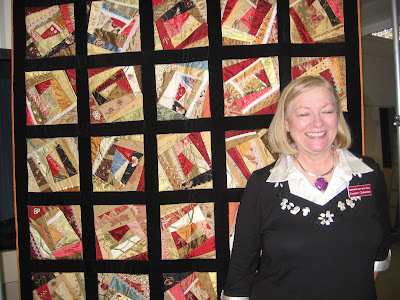 The guild does an Opportunity Quilt every year, and sells tickets all year long.
Usually the winner is someone who needs to be notified and we never get to see how he/she reacts. Well, not tonight.

Annette won! She's a very active guild member, and you can tell from that grin how delighted she is!

Want to see next year's quilt? 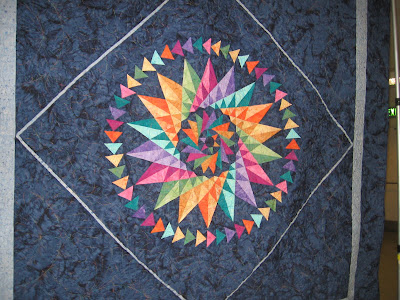 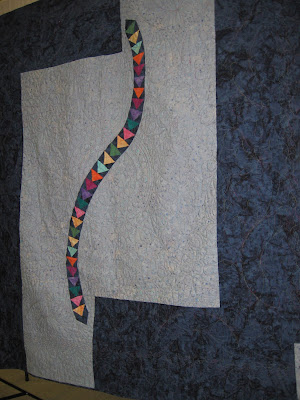 Tickets will go on sale as soon as they're printed! 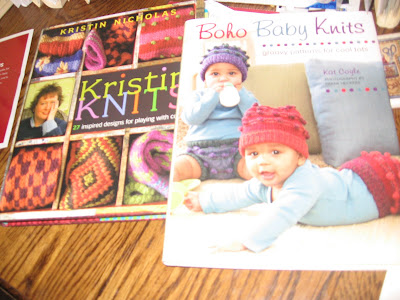 ...with some of the new books added to my library. D5 has said that she will allow Audrey to dress "funky" so that was all the permission I needed to get the Boho Baby Knits book! Besides, Beth is one of the contributors, so I'm just supporting a fellow OOPser, right?? Right!!

The other book, Kristin Nicholas' Kristin Knits, was raved about by Fay Lynn, so that's a good recommendation! Besides, I am all about the color. As well as the texture.

I'm not smart enough to figure out how to rotate this picture--that or it's too late to do it. Take your pick. 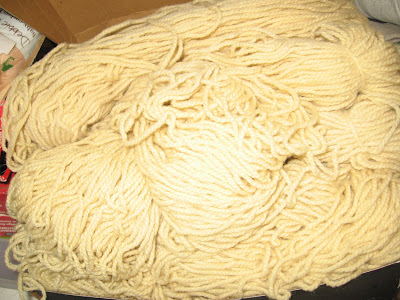 Ethnic Knitting Discovery is from Donna Druchunas, and covers the Netherlands, Denmark, Norway, and the Andes. Norway, hmmm? I'm thinking Dale... among others!

I'm all about the fisherman sweaters. Here's a little proof: this box contains 9 skeins of cream-colored Bartlettyarn, destined for (perhaps?) one of the ganseys in the Cables, Diamonds, Herringbones book. While I love heavily cabled Aran sweaters, there is also something very appealing to me about the more subtle patterning in the ganseys. This book, by Sabine Domnick, is a new translation of a 2004 German original, and I love its combination of historical photos, patterns, and "workshop" approach to designing a sweater.
Because, of course, as we all know, I don't have enough in my queue!
I did join the Ravelry group dedicated to Knitting Down the Stash 2008, which I'm hoping will inspire me to actually--gasp--knit from my stash next year! One of the things I like about it is that it isn't a "no new yarn" kind of thing--rather, it's a way to utilize that yarn that called so eloquently not so long ago. Or long ago, as the case may be--some of it has been marinating for quite a while. I'm thinking of the white mohair that came from Australia when we were there in--was it really 1988? The Australian Bicentenary. Yeah, that was 1988.
But I digress. This is what happens when I talk about stash: the memories and associations come flooding in.
Maybe it's time for some of those memories to become garments, so they'll be more accessible. What a concept!
Posted by mehitabel at 11:48 PM 3 comments: 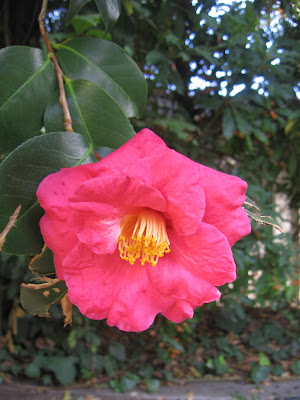 'Tis the last month of the year, already! The refrain I keep hearing is, where did the year go? Well, D5 has a good answer: her "project" took most of the year!

Now we enter into the busy, bustling, stressful/joyful holiday season. I'm thinking about putting up a tree this year, which would be the first time in five years. Don't know if the house will be ready, or if that should be the criterion for doing a little decorating--maybe it should just be done for the sheer joy of it. Even if no one but D4 and I will see it.

I think a lot of that will depend on how well the shoulder heals. It is making progress, slowly but surely. I can knit 8 rows now before having to give up. Note the Pollyanna quality I'm bringing to this: I said, I can knit 8 rows now. I believe the last time I said I can ONLY knit 8 rows. Trying to work on my grinchiness!

Even been using some of the Christmas mugs. I know, it's cheating if they never got put away last year, but still. They're cheerful and fun. 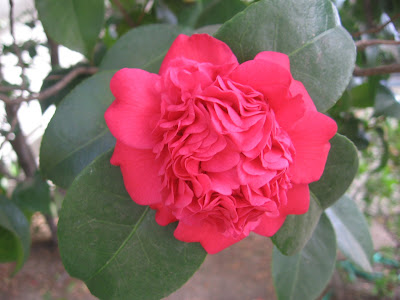 I do believe the East Coast-ers are getting some snow, which will add to the enjoyment of their holidays. Well, truthfully, might add some extra stress, too, but let's keep the outlook jolly.
Nothing like a few snow days to start the winter off right! 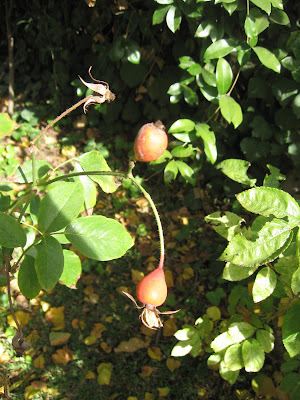 Meantime, here we can look forward to the "Christmas camellia" blooming again. It's that big fluffy one with the masses of inner petals. It grows by the front steps and is taller than the roofline--which, at that point, is a good two stories tall. It is usually in full bloom by Christmas, with brilliant red blossoms that stay on for a long time and make a gorgeous carpet on the ground when they fall. 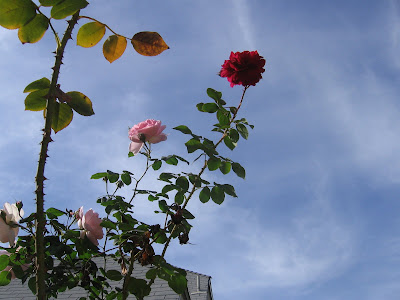 There are a lot of them this year, and perhaps I should look up a recipe for Rose Hip Jelly.

So, while my yearnings for snow will remain unassuaged, I am going to concentrate on the good things around me.

And maybe, just maybe, I'll put up a little Christmas tree. I'll let you know if I do!
Posted by mehitabel at 10:00 PM 6 comments: