True Confessions of a Clutter Freak

After visiting a couple of knitter blogs today, I came to Crazy Aunt Purl who is on a cleanup and de-clutter campaign. So I thought perhaps I would blog about my efforts to reduce the CQ (clutter quotient) around here. Oh, and get ready for a possible move to CT. 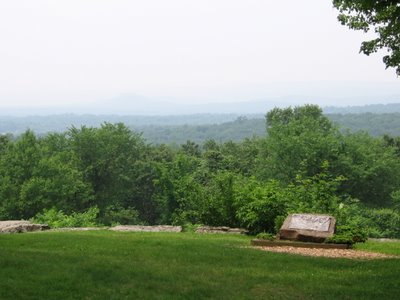 A little background: about a year and a half ago, the Mr. and I decided (well, I decided, he was all in favor as long as I didn't make him do the work) that we really needed to do something about the state of this house. Between his various problems (the broken leg and subsequent knee replacement, then the cancer) my attention had not been on the house; and we tend to be packrats anyway. The Grand Plan was to reduce the volume of "stuff" by at least half.
Now, this is a big house. As in, 2500 sq ft big, with big rooms and big closets, and a full attic. Ah, the attic. And the two-car garage.
So what's the current status--what left? Well, thanks to some heroic efforts by the Younger Generation, the attic is now empty. The garage is still full, but some of that is stuff the The Resident Daughter is holding onto for her move--grandma's table and 6 chairs, a dresser--and the glass collection. Or part of it. Depression Glass is bulky to store. The piano is gone, along with the 8-foot brown sofa; we sold Himself's car to Carmax, and Youngest Daughter took her beloved VW bug home with her, so now there's only 2 cars in the driveway. I took two full Explorer-back loads of really nice (but way too small) clothes to a friend who works with a thrift shop that helps women get back into the workforce.
The sad thing, of course, is that we now have fewer people here, since Himself lost his fight with the cancer. It was inevitable, but he is still loved and missed here.
His clothes went to friends who were assembling boxes for dialysis patients uprooted by Katrina. Our group of charity-minded quilters (that's another whole post, how we migrated from Ugly Quilts to Hope Quilts) had a bunch of quilts ready to go, too, so our friends wound up sending 42 boxes of clothing and quilts to their contacts. The cat population is lower now too--the white cat, who was Himself's most devoted nurse and constant companion, at the age of 21 went to join her man.
A couple of rather largish dressers have also gone to live with Youngest Daughter, so you'd think that it would be getting better around here instead of worse. Well, maybe. It seems as though, the more I purge, the more stuff creeeps out of hiding! I had to move a lot of stuff so the contractor could get to the French doors, and some of it actually went all the way out. Books--most of the law books--are gone, and I'm going to weed out and organize magazines, too. I don't think I will be wanting to cross-stitch designs from those old magazines; and I'm beyond the Country-Living type of thing. Now I want that Craftsman look. (In THIS house? It is to laugh!)

Okay, okay. Enough of this. I did take a whole lotta pictures of the "before" look and as I get areas done, I'll post before-and-after, just like I did with the deck and the fence. Maybe you guys can keep me honest here, huh?
Posted by mehitabel at 10:33 AM 2 comments:

This is the "before" shot. Remember that tree that fell over? Well, this is the way the neighbors repaired the fence. I especially like that one panel was put up (leaned up?) upside-down. Oh yeah. I have lots more revolting pictures, but this one tells it all. Really, the only thing holding up this fence was the termites, holding hands and praying little termite prayers. 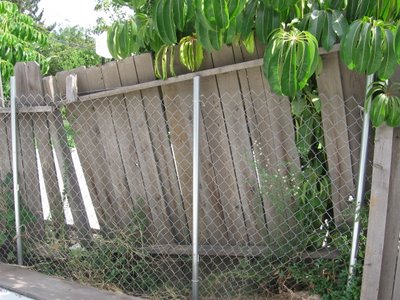 This is after. I won't say it was super-speedy, but it's done right and it looks really good. See that little planting area? Can you say, whee, new plants! This is taken from the front of the driveway, the shorter part of the fence. Can you see the old gate there? They didn't want to pay for a new one, so the old one went back up. Awfully nice of my contractor, don't you think? 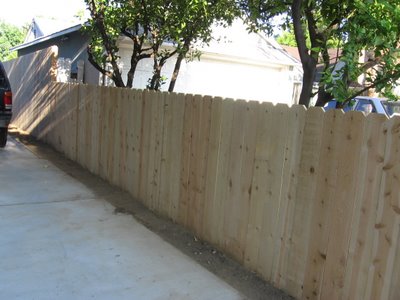 View in the back yard, under the apricot tree. Does this not look like a nice place to sit and knit on a summer afternoon? 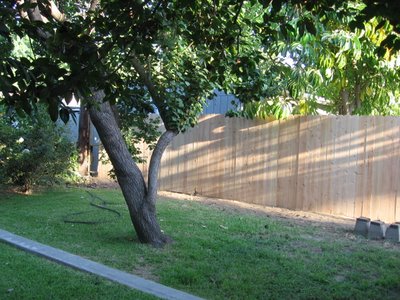 That little bit of concrete curbing you can see on the left side is a vestige of the original house and yard. It delineated a professional-sized croquet court. Yes, back in the '20's, people with big houses and big yards could have a croquet lawn in the back. There was a lily pond about where that hose is... the apricot tree is "new" since we planted it, way back when. I've made a couple of tons of apricot jam and apricot jelly from its fruit. Now, I'm afraid it's almost gone--we had it cut back last year, and no fruit at all this year. I will give it a year and see what happens and then it might be sayonara apricot tree. Very sad.

Off to SnB to get my knit on. If I can find the camera, I'll likely have another post later!
Posted by mehitabel at 9:37 AM 1 comment: