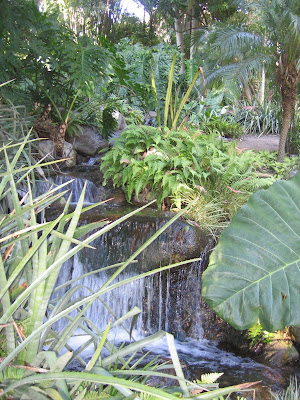 In my innocence (or is it ignorance?) of the Ways of the Huntington I did not realize that First Thursdays are a Big Freakin' Deal there.

And me a member, too! 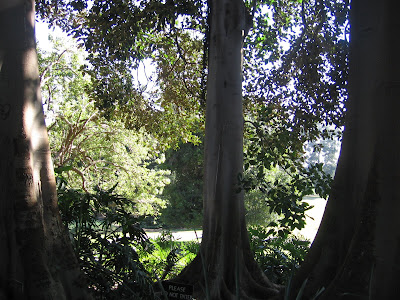 All you have to do is call for a ticket, or request one online. This means that there are a whole lot more people there than you would normally find on a Thursday. Not that it felt crowded, you understand, once we found a place to park and got through the entrance.

It's a big place.

This shot will give you some idea of the vistas.

This little grovelet is right across the path from the waterfall.

Lots and lots of things in bloom, even in February. 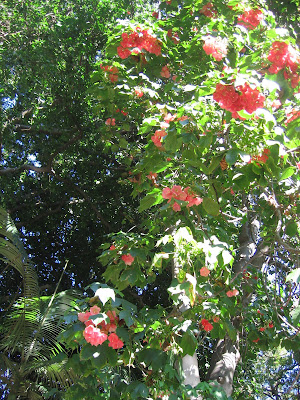 I'm not sure what this tree is called, but it's sure spectacular. 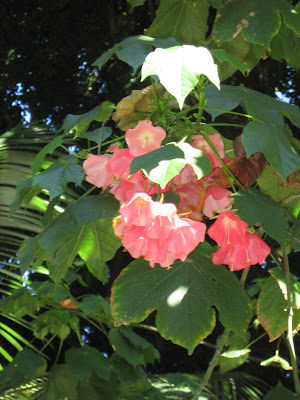 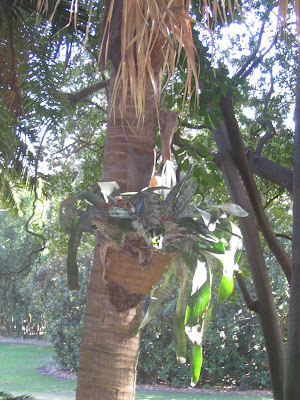 attached to the trunk of a palm tree.


Here's Nate, sleeping his way through the Japanese Garden. 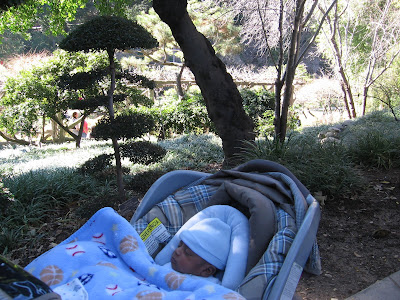 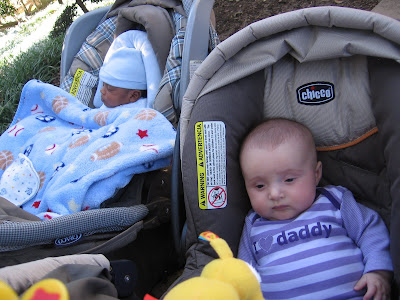 In fact, she found her toy lion much more fascinating-- 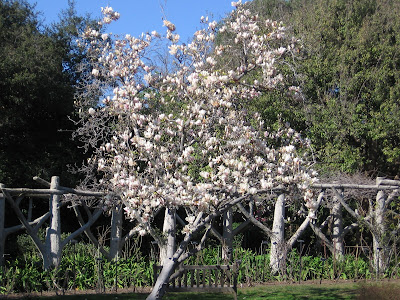 it jingles every time you hit a bump with the stroller, and when the path is paved with squares set off with 6 inches of grass between them, there are lots of bumps.

The magnolias are in bloom all over the place.

These pictures are dedicated to the people all over the east and midwest (you know who you are!) who are selfishly hogging all the snow and forcing us to take long walks in the sunshine and balmy temperatures.

Would I rather be snowed in and able to sit and knit on my sofa with a fire in the fireplace and a nice hot toddy, and a clear conscience? 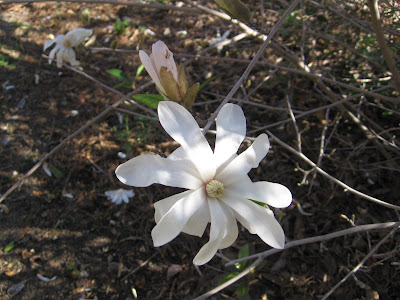 But would I want to have to dig my vehicle out of the snowbanks? Or listen to the thundersnow?
Well, maybe not so much.

I guess I'm going to work on a new theme for me this year: 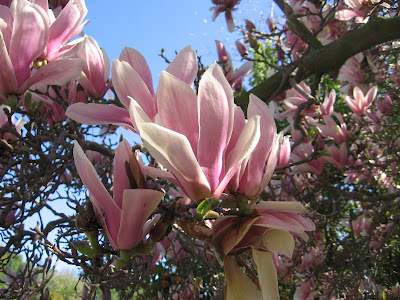 Wednesday is for Knitting 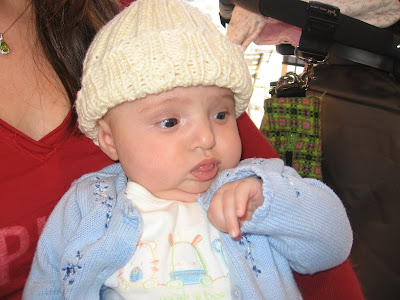 Audrey is letting us know what she thinks of her new hat. She kept it on, though, and Mom was quite happy to have it.

So, of course, I had to cast on for the third part of the set: a hat for her daddy.

He has wanted a "Charlie Brown hat" for as long as I can remember. As soon as he found out I knit, he asked for one.

I bought the yarn (Knit Picks Wool of the Andes) and the book (EZ's Knitting Around) and have had them ready for a couple of years now.

But, I wanted to do the hat in double knitting, not at two hats joined at the brim. 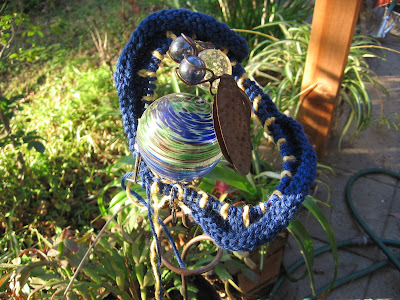 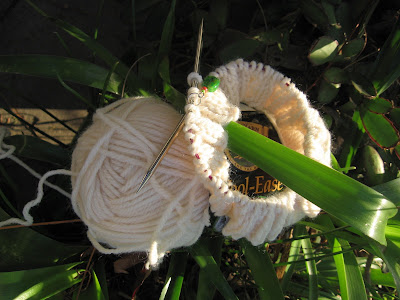 Now, of course, with both mom and Audrey having new hats, well, I figured I'd just go for it.

Now if I could just figure out a way to knit on both projects at once!

It occurs to me that I was awfully busy knitting for quite a while today, and somehow having only this much of each hat to show for it means that I may have been a bit optimistic. We'll see--there's got to be some good train-wreck TV on, so that should give me time to work on these. 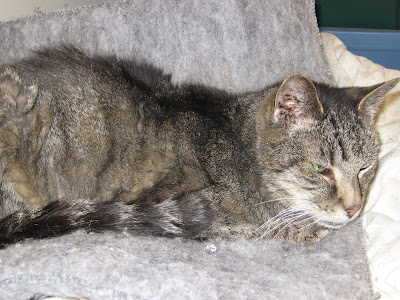 Meanwhile, the feline part of the family was showing me that they know how to live...
find a comfy spot. 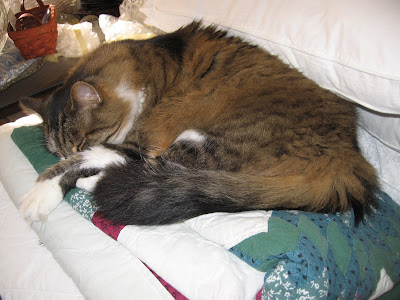 Curl up and look adorable.
Tell the world to go away already. 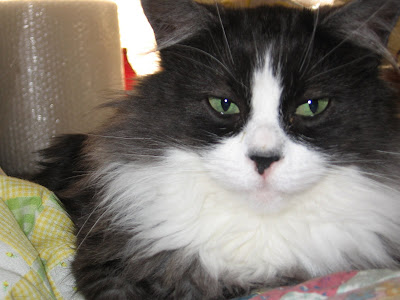 Simon says, why are you putting that thing in my face?


Don't you know it's nap time?


What ever happened to personal space anyway? 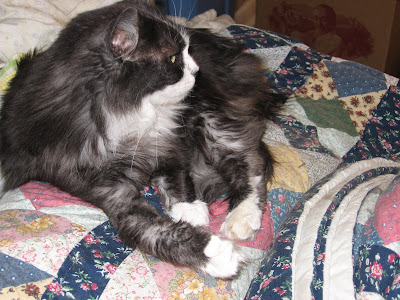 He knows he looks adorable on the quilt.

This is why all of my laundry is covered in cat hair, or as they would put it, properly seasoned. 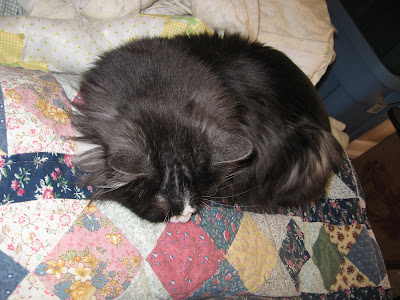 Hmmm. Forget it then.

This is what I'm good at, and I'm going to just do it. You go play with the sticks and string.

The world is my purr pad!
Posted by mehitabel at 4:43 PM 5 comments:

And Another One Done... 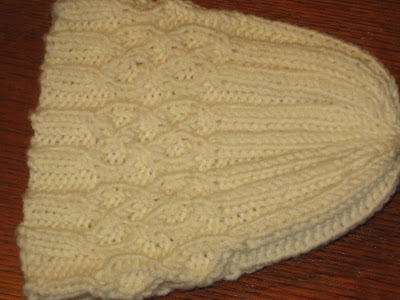 Probably one of my fastest FOs ever! This is the Nottingham hat, made from the leftover ball of Pure Merino from Shedir.

Since Shedir was claimed by D5, it seemed right to make a semi-matching hat out of the remaining yarn for Audrey.

After three failed efforts on Sunday night, this was successfully cast on Monday night.

Worked on during my two hour wait at the doctor's office today (see previous post) and then again at class. 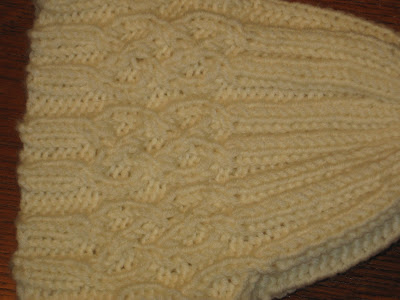 There were just a couple of decrease rows left at the end of class, so I finished them off while watching the tail end of The Biggest Loser. 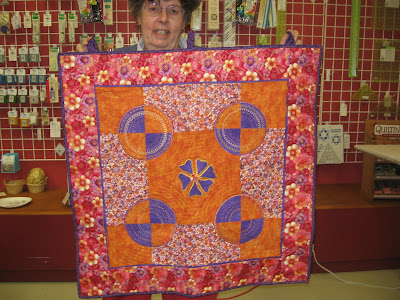 Hey, free pattern, leftover yarn, cute as a bug's ear. What could be better??
Hurrah for finishing! Gail brought her little quilt to show us that's it's all done. Quilted, bound, and ready to be sent to France.

Anne started a Mystery Quilt project on Sunday--there are more pictures on her blog, but I wanted to take a couple and put them here as well.

Bright beautiful colors! And dinosaurs, too!! 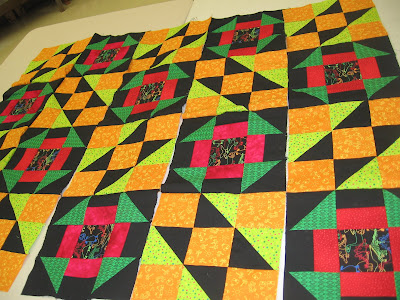 And , one more quilt, which is a WIP at the shop, and no it isn't mine although I do like the style and I'd love to have one like it! I just thought it was interesting and inspiring and I wanted to share it. 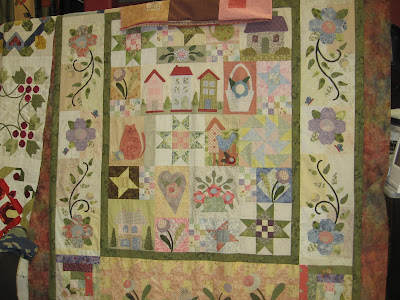 Whatever your political beliefs happen to be, don't forget to go out today and vote if you have primaries today. I've been, and have expressed my opinion on the Presidential primary and all 6 initiatives.
I'm usually way out of step with my fellow Temple Citizens. Oh well, as long as they reserve one booth for me I'm happy.
Then go over and see what Franklin and Dolores are up to. I didn't get to vote Fibertarian today, although I did manage to do a whole lotta Nottingham while I waited (and waited, and waited) at the doctor's office today. (I'm fat. My hemoglobin levels are down. Same old same old!) Knitting does keep one from throttling anyone while stuck in Doctor's Office Hell.
Pictures later. This little hat has finally taken off, and I have high hopes of getting it done shortly.
And if you don't have a reason to vote today, then Think Fibertarian!
Posted by mehitabel at 2:50 PM 1 comment: 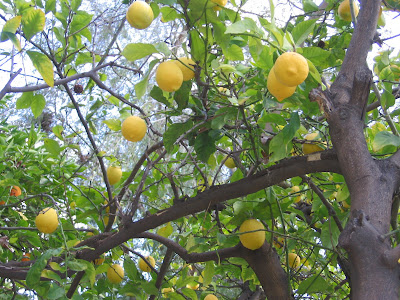 This first picture is for Dave, who expressed amazement when I mentioned going out to pick a lemon or two to make Lemon Squares. I suppose there are a few perks to living in the winter-less depths of SoCal.
Lemons off the tree would be one. So would oranges.

It was a busy, very tiring weekend around here--not that you could tell from 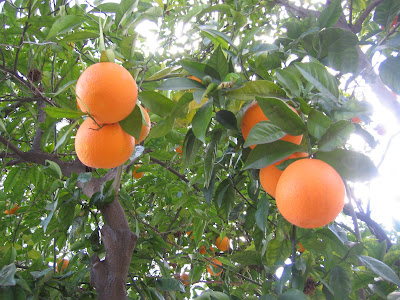 any results around here, but it definitely was an on-the-go experience. D2 came to town on Friday and we spent the day getting her admitted to the Local University Hospital for some testing. Since her husband had driven them down, and was also operating with an injured knee, I drove out there and back. Let's just say, I've known for a long time that the 10 West and the 405 are really busy freeways. When it takes you 2 1/2 hours to travel across town, though, the reality does hit with a smack.
We finally bailed off the freeway and took surface streets the rest of the way back.

Of course, yesterday I had to make the drive again, this time with D4 & D5. So far, the testing has not been very uncomfortable for D2, and she's taking it all like a trouper. 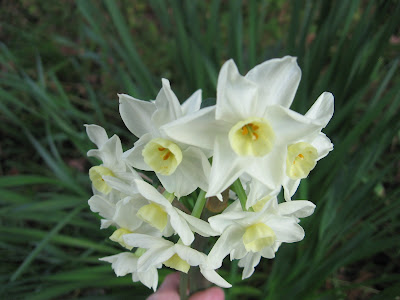 Super Bowl Sunday isn't one of my favorite "holidays" but it's definitely high on the list for the spouses of my Ds! D3's husband went to a big party and was quite happy to enter the football pool--and little Nate won! I guess that can be the start of his college fund--hey, every little bit helps! We already think he's a lucky little boy, and I guess this just reinforces it.

My knitting for the weekend was pretty much 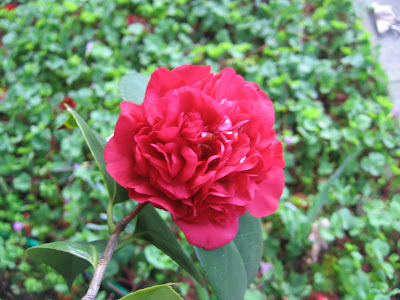 an exercise in frustration. I tried casting on for Nottingham, a cute little hat-- and, after the third botched attempt, I finally gave up and threw the whole crinkly mess back into the knitting bag. I'll try again tonight and see if the Knitting Goddess is in a better mood. I mean, 72 stitches? In the round? I just finished Shedir--how hard can it be to make a smaller version?
Apparently, a lot harder!

I need to make up a few hats--Shedir was a big hit with Jessica, and she asked me to make her a hat. Now, you know as well as I do, if I make her one, her sister will want one as well. And Shedir has found a home with D5, but the last ball of yarn is just enough to make a little Nottingham for Audrey--how cute is that, anyway? Then Nate is in need of hats to keep his little bitty noggin warm--very tiny babies need to conserve body heat, even when they live in a relatively mild climate like ours. Oh, and I have some Blue Sky Cotton that is just asking to be knit into a Baby Bolero (from One Skein) before he gets too big for it.

Hmmm. Laughing Carrots (from Knitty.com) for, who else, the Grandcarrot. And working on my Mission Possible '08 goals, too. I think I need some couch time--here's hoping the Tivo worked, and I have some choices for tonight! (I love Tivo. I still don't believe in it, though--but it hasn't failed me yet.)

I did get a bit of baby-holding and Grandcarrot-snuggle time, though, so the weekend's activity was all worth it. 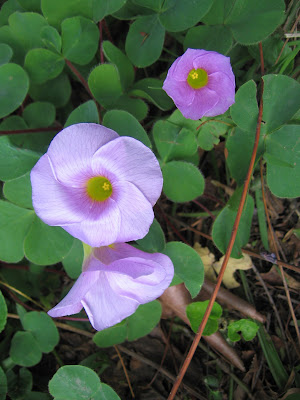 Today I decided that, without any great knitting pictures, I should just feature a few of the cheerier aspects of life around here. I mean, if I can't have snow days, then I have to play Pollyanna and look for the brighter side of things. (Pollyanna was one of my childhood favorites. If all you know of her is the saccharine Disney version, do look up the books--she's a funny, feisty little person who's a lot like Anne of Green Gables.)

These little purple oxalis pop up all over the yard this time of year, and then when it gets hot they go dormant and disappear. The leaves look like clover and I'm sure they're related to the bright yellow oxalis that also pops up--except that I don't have any yellow right now. I've also got my first daffodil of the season.

Oh, you want to see it? Okay. Here it is! Not the greatest picture, but definitely and defiantly a daffodil! (I had to prop it up on the flowerpot, because I stepped on it trying to get the picture of the camellia that's up above there.) 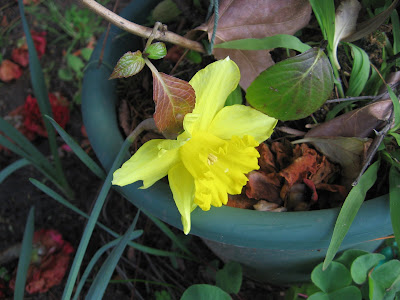