A Finish, and A Good Beginning 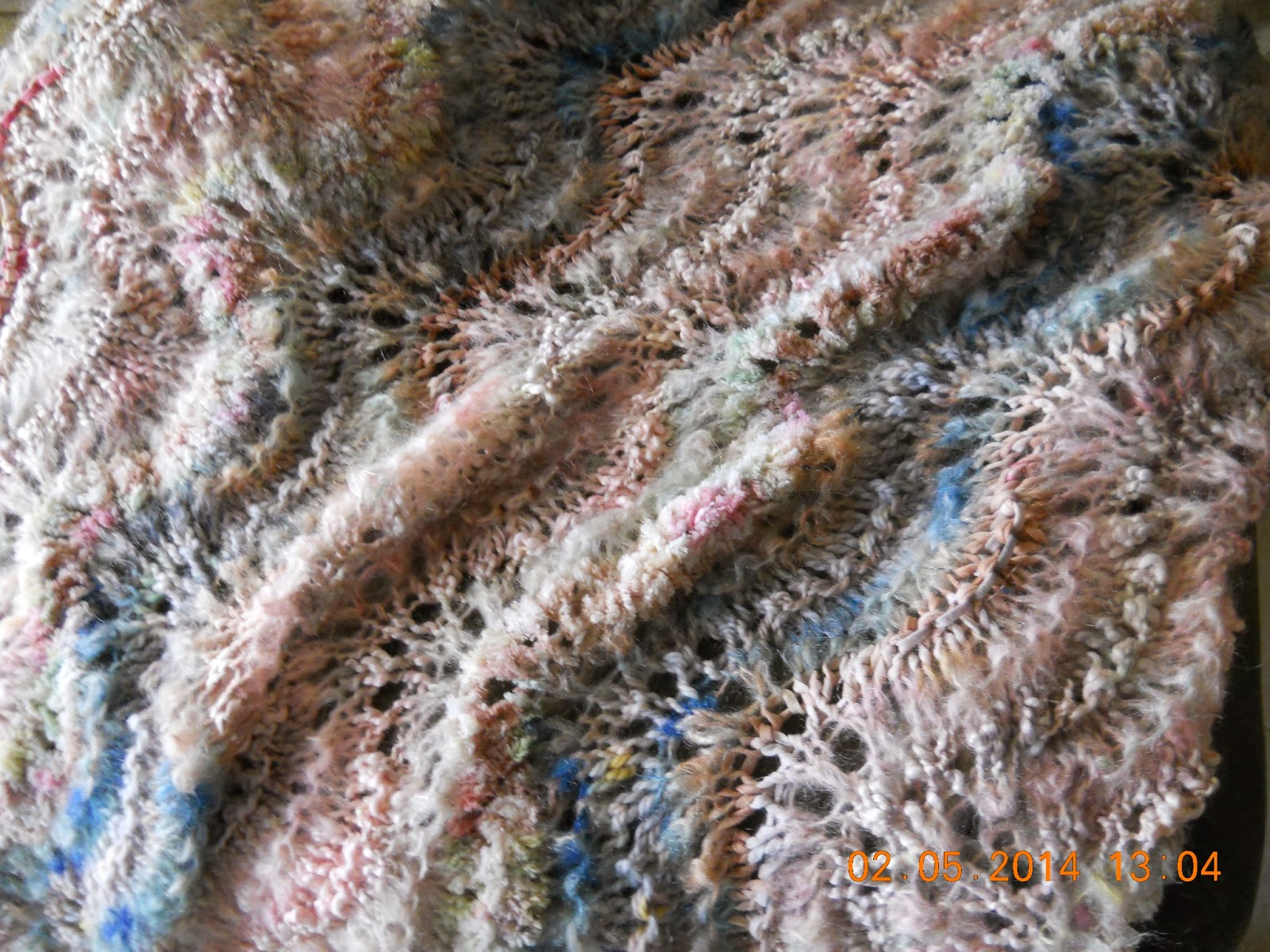 Wow, I can't believe this is finally done! (Well, except for running in the ends. That's another day's work!)

I started this throw, the Absolutely Fabulous Throw using Colinette yarns, back around 2005. It's been in and out of rotation being worked on over the years. There are 9 different yarns in it, 3 colors of variegated mohair, a tape yarn, a chenille, a wool, a couple of boucles.

It was the project I brought with me when I did a Relay for Life event with a group called Stitchers for Life. The booth had a couple of rocking chairs and featured people sitting and knitting.
So, instead of walking laps overnight, another knitter and I rocked and knitted from 10 pm till 8 am. 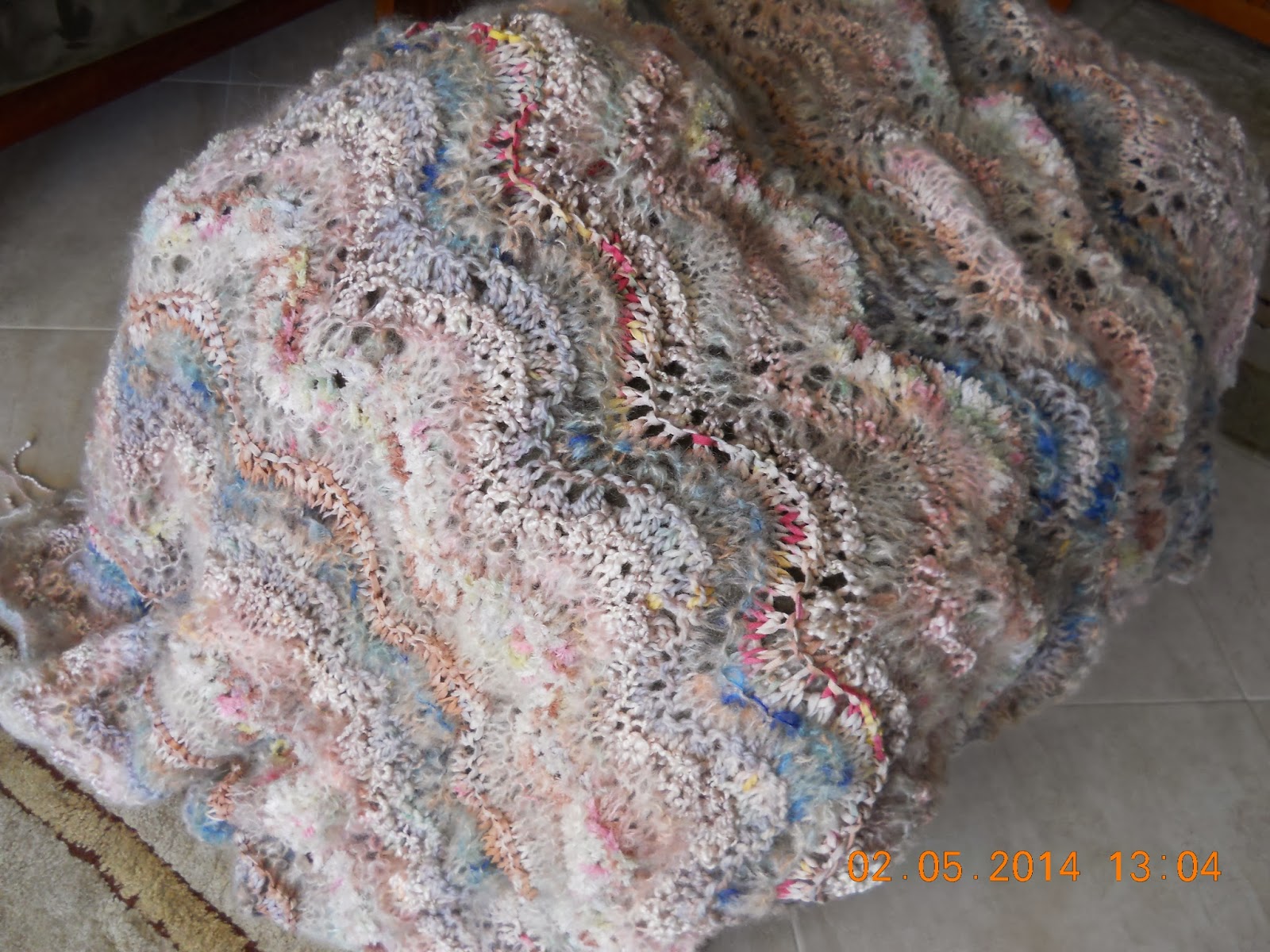 Yes, that was a 10-hour stint of knitting. You can see why this was the perfect project--kept the lap warm, and there wasn't a chance I'd get even close to done overnight!

I did manage to give myself a good charley horse in my shoulder though.

And now, it's finally an FO, ready to be put to use, and one BIG project bag emptied. Yay!

Now on to the next project! 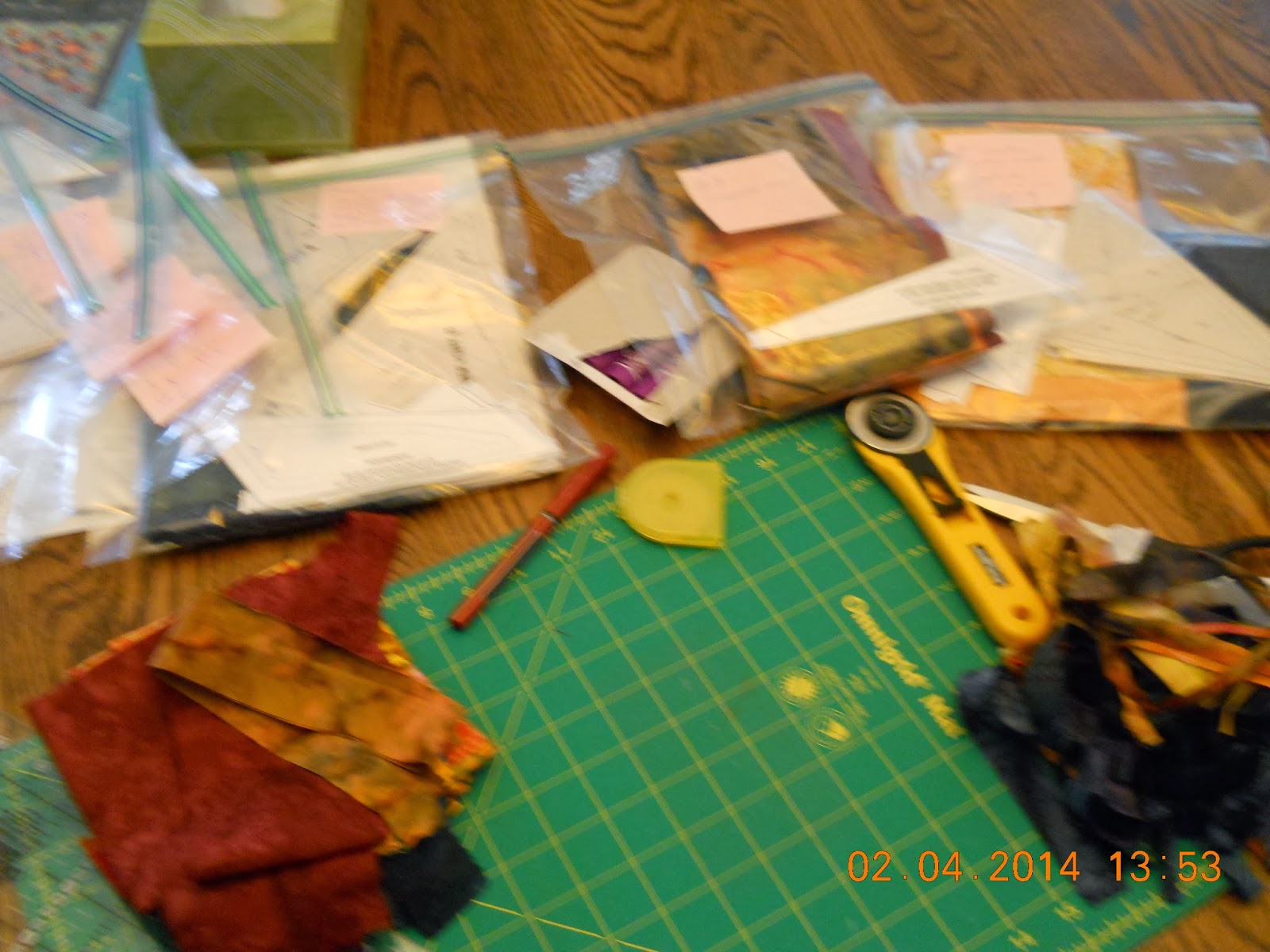 I went through several boxes of fabric--there's been an influx of project boxes coming "home" from storage--and pulled some oranges and orangey yellows and golds and browns for the stars. 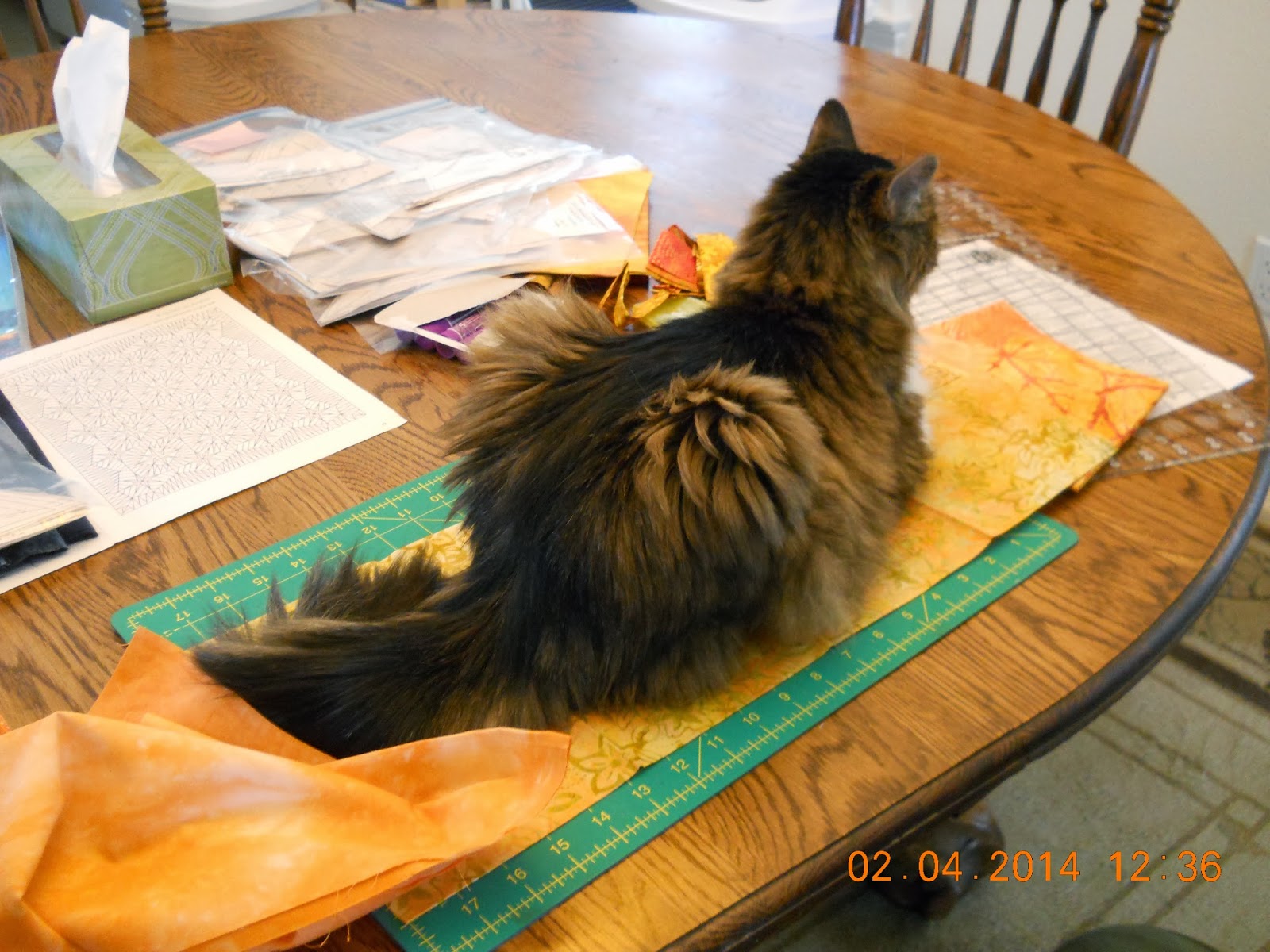 Of course Mother's Fluffy had to help out in his own way. You never can tell if that pesky fabric might decide to fly off into the sunset if it wasn't weighted down.

Luckily he gets bored easily so I was able to finish cutting the strips for the different star sections,

There was a small error in the math department, but after a second (or was it third?) cup of coffee, I was able to resolve it.

There will not be six of this quilt. It wasn't that kind of math error. 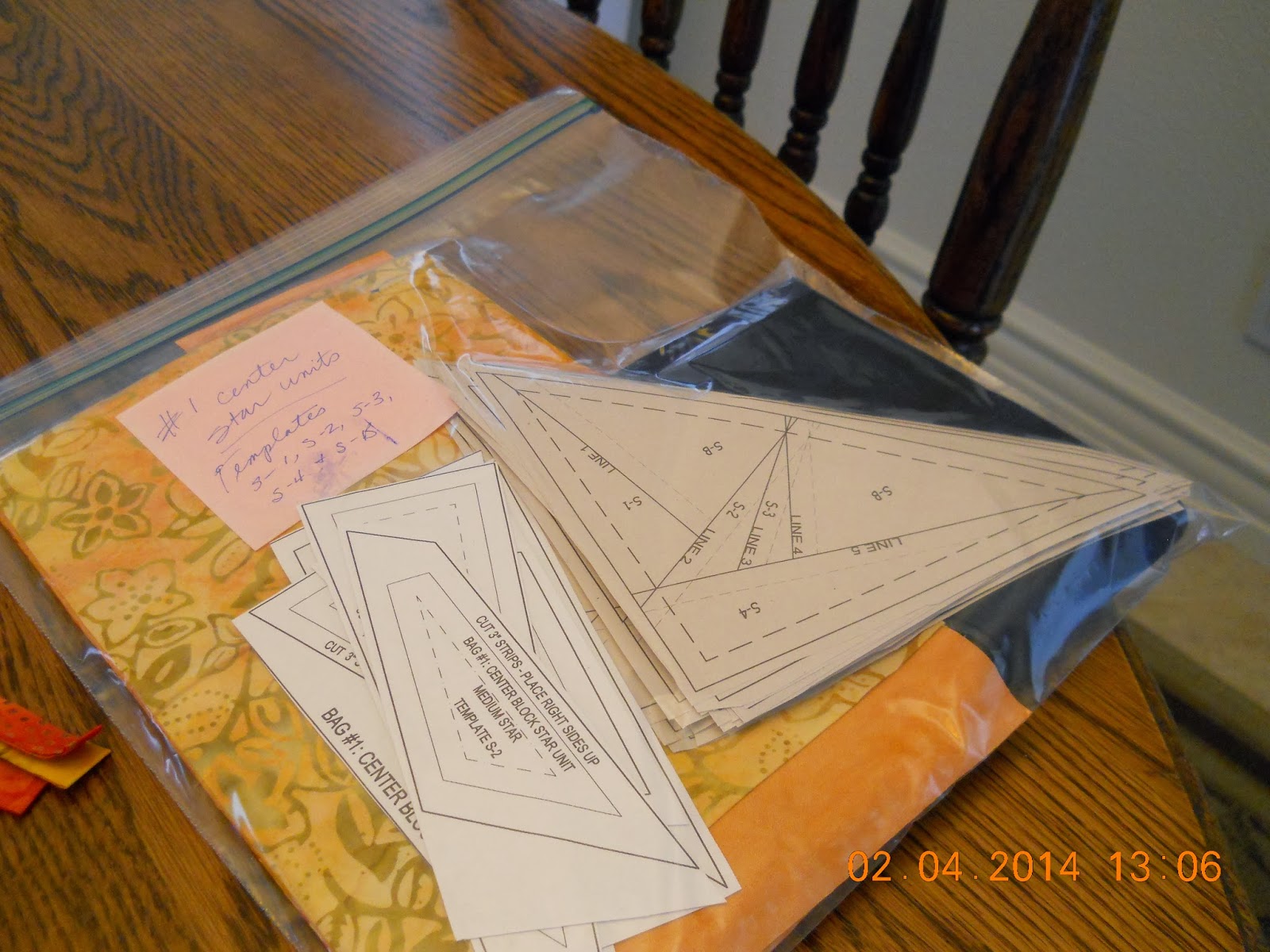 I had also pulled some dark blues for the first background pieces. These blues are the background to the central stars, and then become spiky rays around each star. The spikes are set against a second background, and there are secondary star patterns that show up when the 12 blocks are finally pieced together.

That's where I am now. The main background is a turquoisey blue with purple streaks--prettier than it sounds--but it's a 7 yard piece, so it's going to take a little more handling. I've got the ironing board set up (another storage run to retrieve it) and if all goes well tomorrow I'll be pressing that giant piece and cutting it into strips.

Then the strips have to be cut into the separate template shapes, tucked into their own little baggies that will go into the big bags. It can all be done with a rotary cutter, thank goodness, and it all has to be done before I settle into my class on the 16th. You can expect a few more posts featuring all this cutting! In spite of the tedium, it really is rather fun, especially if a fellow sufferer classmate can make it over to work on hers!

Posted by mehitabel at 10:15 PM No comments: 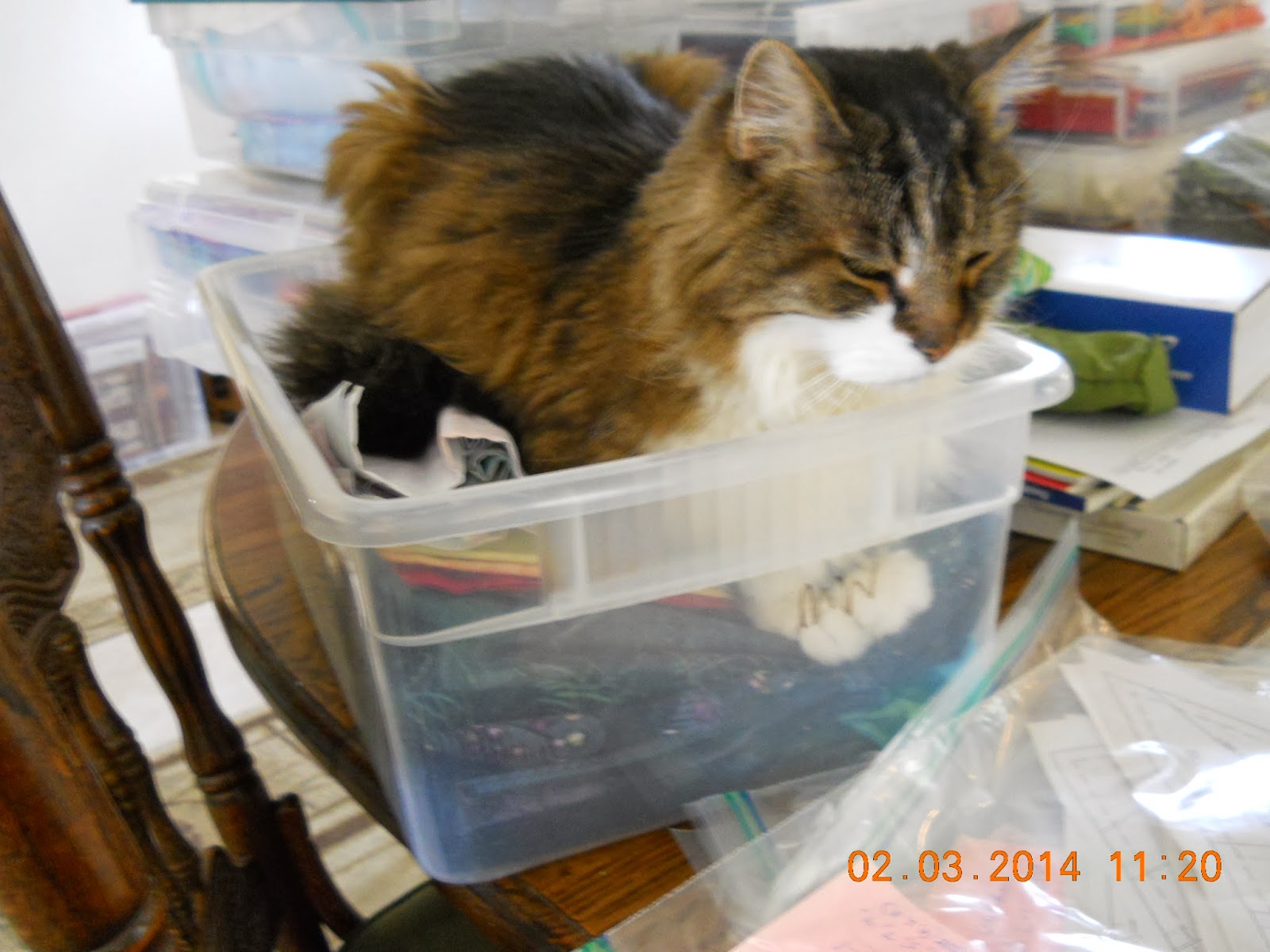 Cooler weather and a little bit of rain seem to have worked some magic with my uninspired quilting mojo. Or maybe just the realization that I'm leaving for Asilomar in less than two weeks, and I'd better get that project prepped.

I'd already started on it--had all the foundation papers cut and distributed into their bags, and last week I printed off the templates and glued them to template plastic. I also had all of that, and the fabrics I wanted to use, set aside in a plastic tub.

Yes, that one over there. The one that's full of cat. As usual, my little furry friend had to be right there with me. 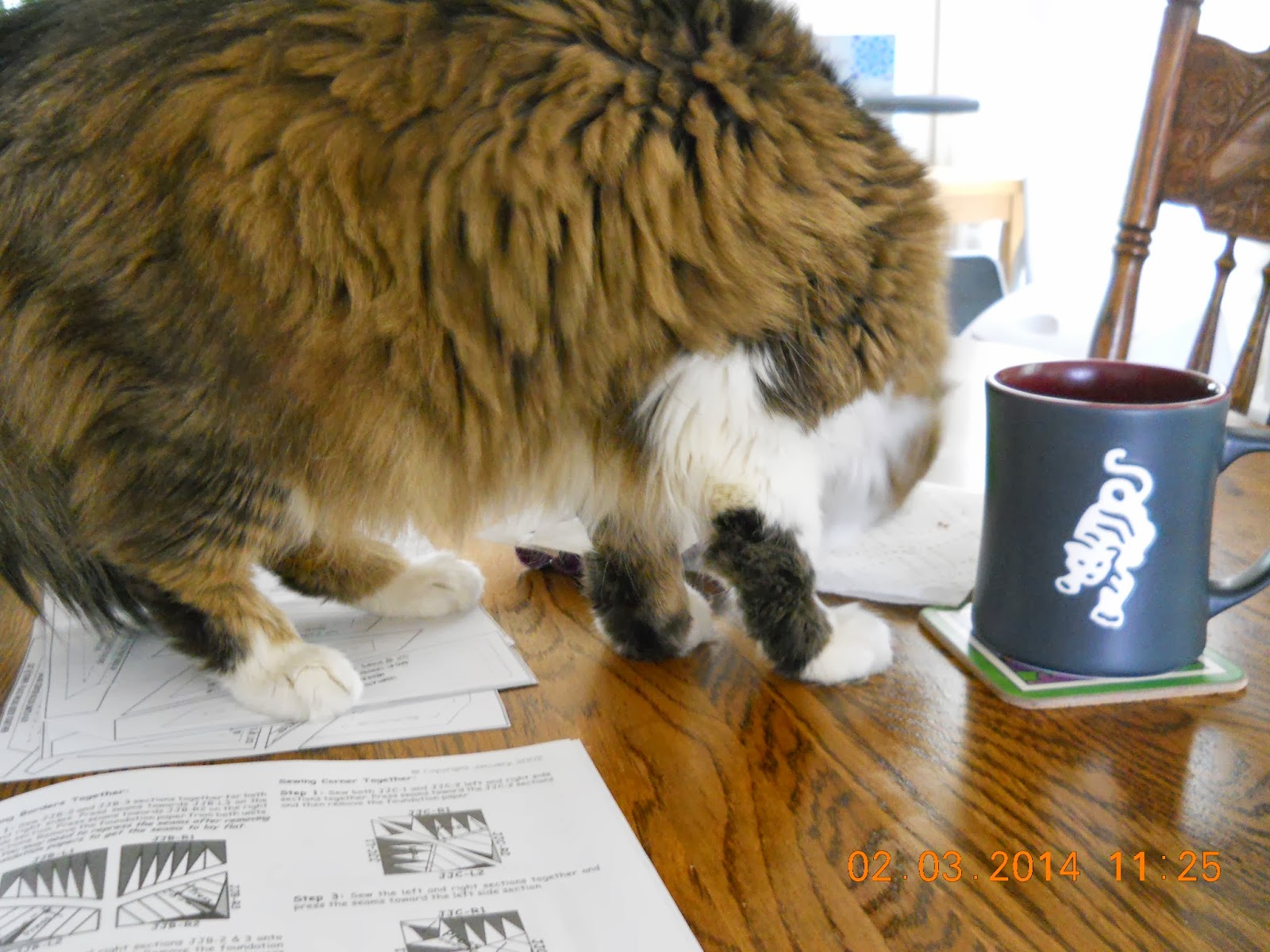 He did want to explore and check out what I was doing.

Kind of hard to cut out templates when they are being anchored down by a large cat.

Even though he has awfully cute feet.

He's sniffing at the napkin I used to hold my buttered toast while I sorted these pieces. Yeah, he loves butter. I had to get up to dispose of the paper before he ate it. 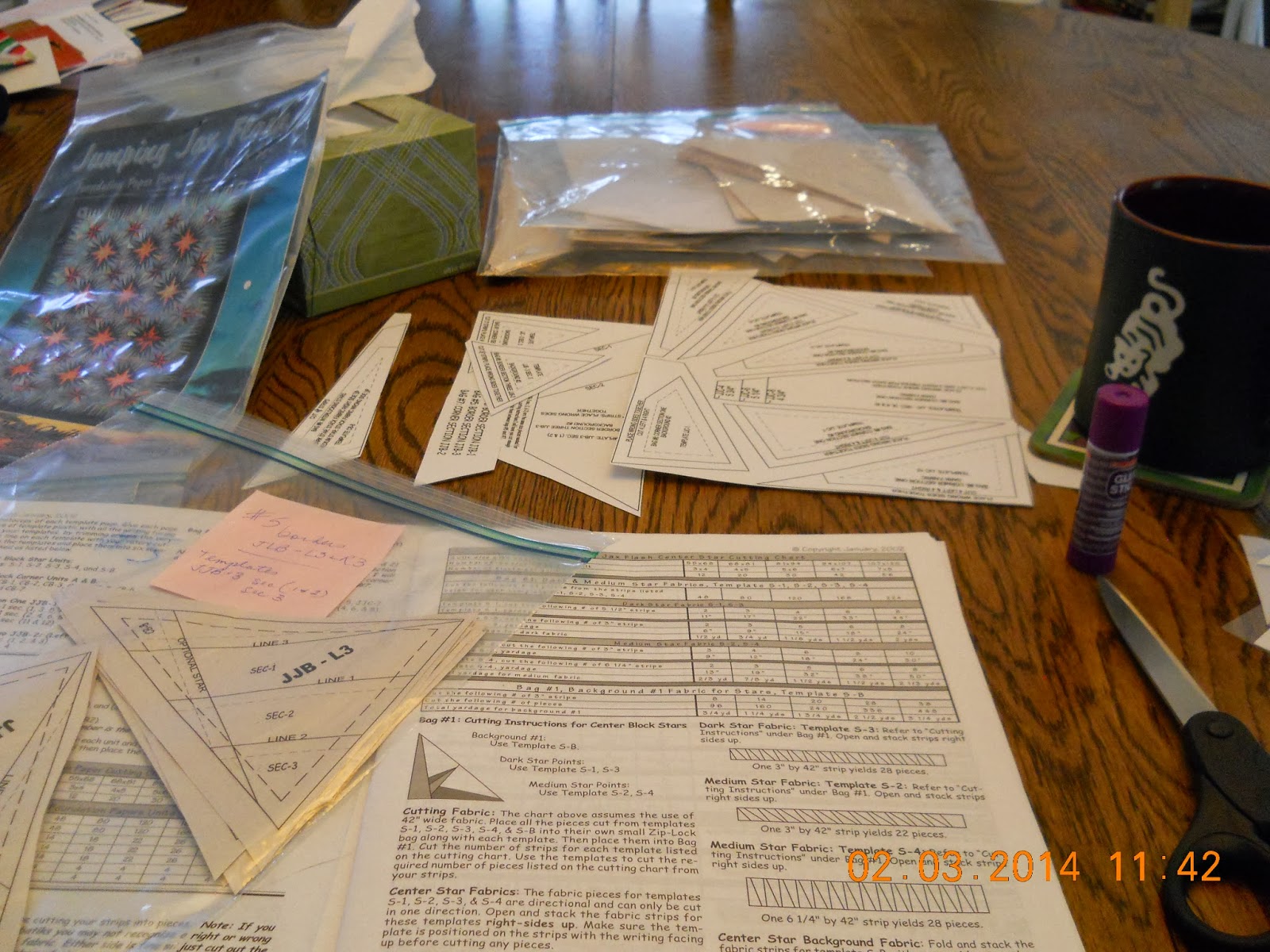 Once the templates were all trimmed and put in the right bags, I had to figure out some fabric colors and assign them to the right places.

I had brought home a few more boxes of projects and fabrics, so I had a lot more batiks to go through, looking for the right colors for the stars on the quilt. Also, this quilt, Jumping Jax Flash from Quiltworx, has two different back grounds, and it wouldn't do to mix them up. Once that was done, I started choosing star colors. 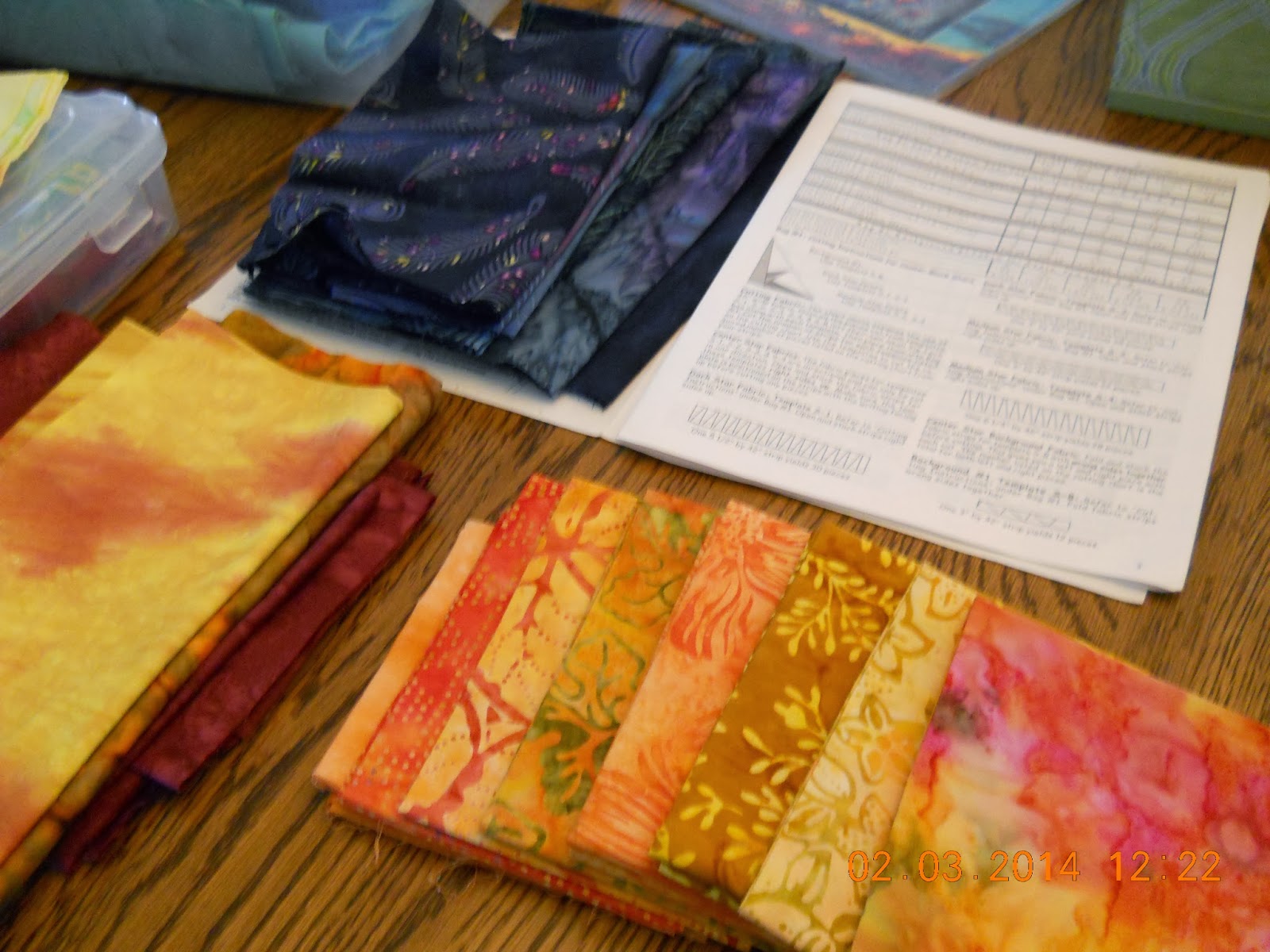 Oh, there are two different sets of stars, too. So here's my semi-final array: the dark blues are the first background, and will go behind the 8 fabrics in the lower right of the picture; the ones on the left are the second stars which will mostly be against the second background, which is that turquoisey one in the upper left edge. I also found a lighter turquoise to throw in for some sparkle--the main fabric has some purple streaks in it as well. I think it will work nicely.

Now, visualize a break in creativity here, since I had to make a quick trip over to the storage unit to retrieve  my ironing board. I did a quick visual scan to see if I could locate the other project box, the one with the project I had really wanted to do. It was a quick trip, because it was chilly out there and the wind had come up. So much for spending the day inside and being unprepared for actual "weather conditions."

I also managed to get the sewing machine set up, cleaned and oiled, and enough space cleared around it to jump in on the pinwheels again. 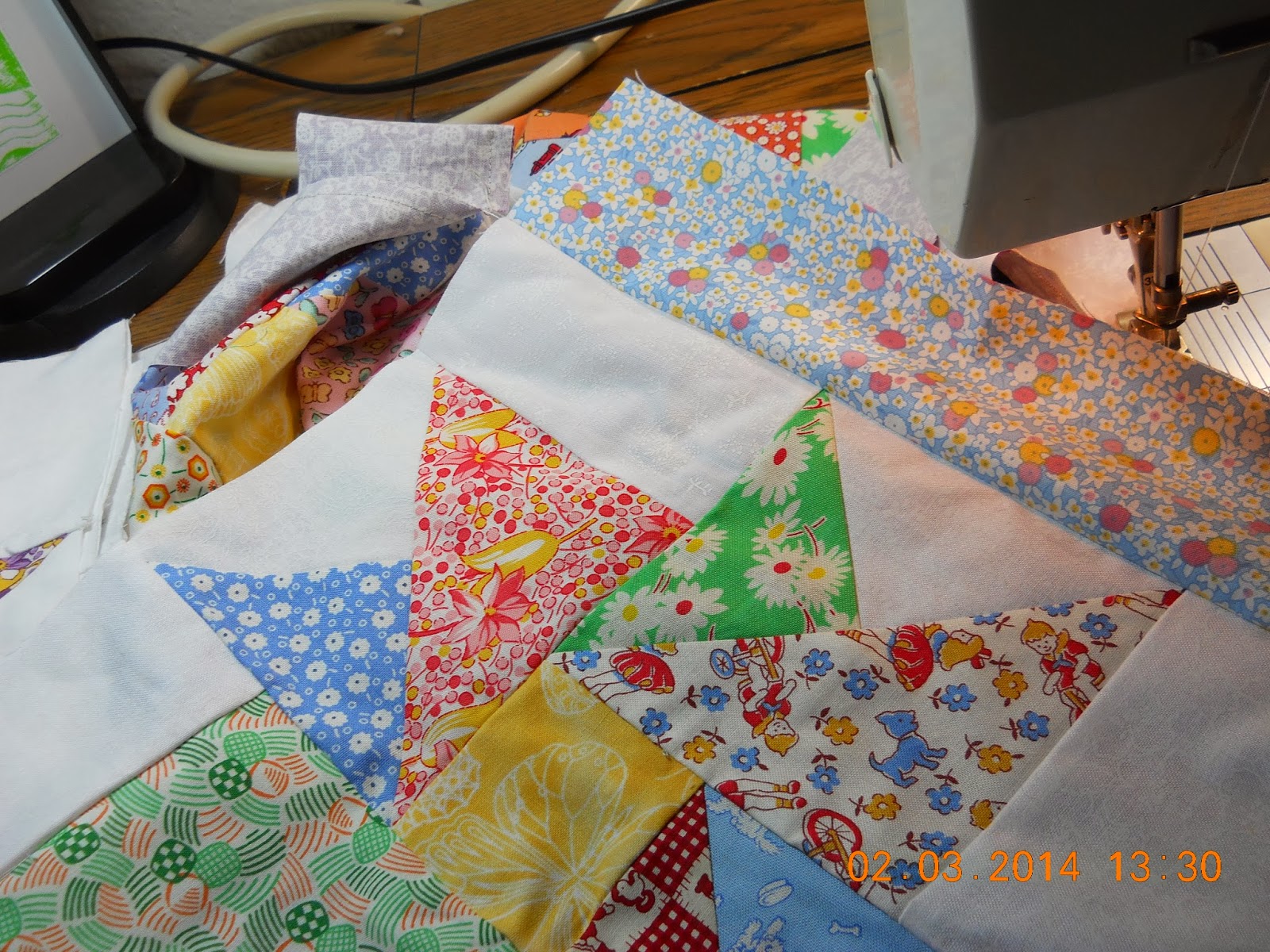 Yes, THOSE pinwheels!  I finally had one box of pinwheel blocks, and one box of sashing/cornerstones, all in one spot, so I gave in to the temptation and started sewing.

I figure each block needs to have a sashing strip attached to it. The sashing strips that are left will all have a cornerstone attached, and then I'll be ready to assemble the tops.

I have a sneaky feeling that there is another box of pinwheels somewhere. 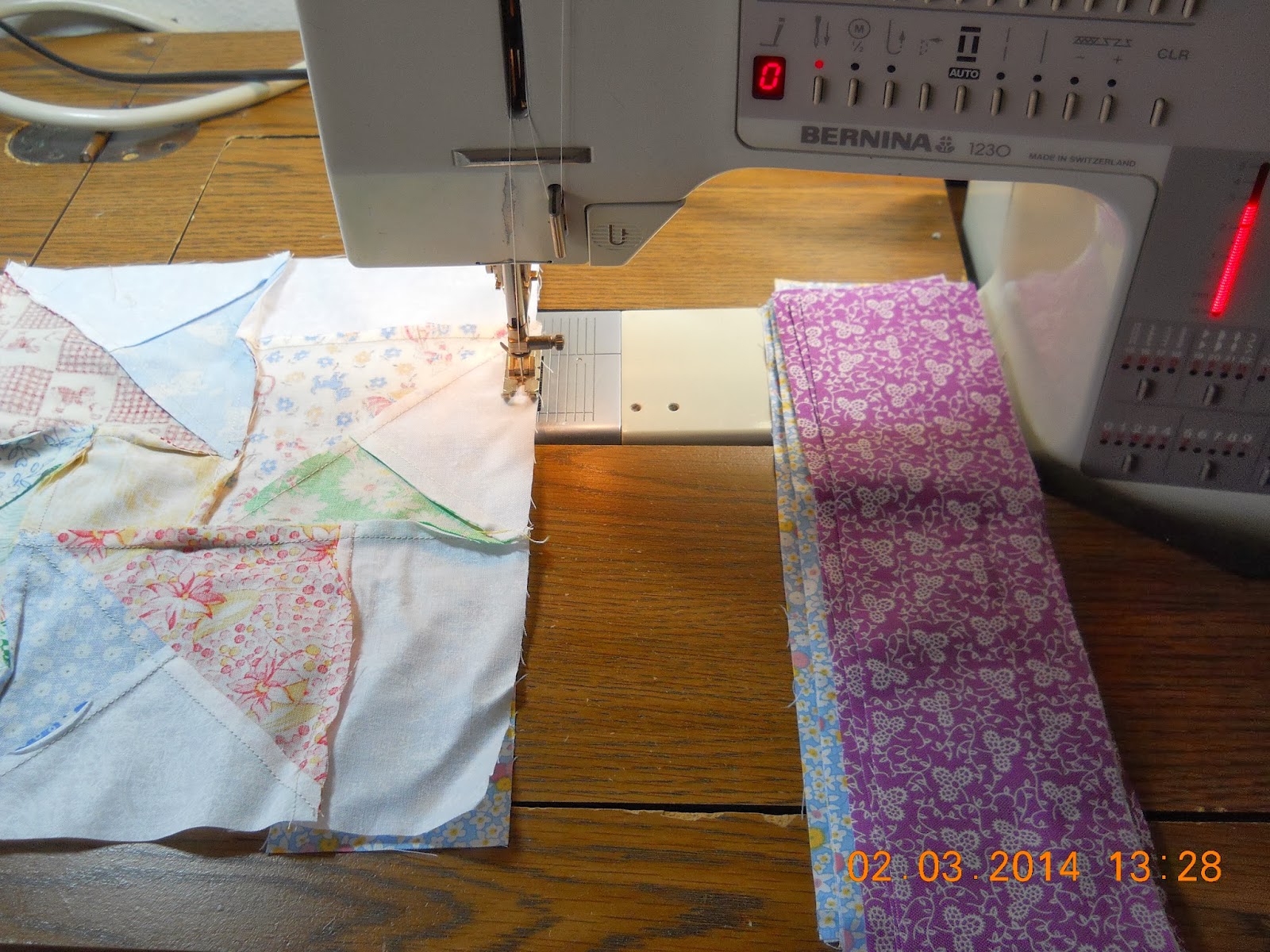 These are all spinning in the same direction, and looking at the stack of the first 50 blocks, I don't think there are a total of 300 here.

But I didn't want to take the time to count them all!

The sashings are clipped into sets of 25 each, so that will make counting pretty easy.

I can't tell you how good it felt to sit at the machine again and just sew. I have missed this so  much! 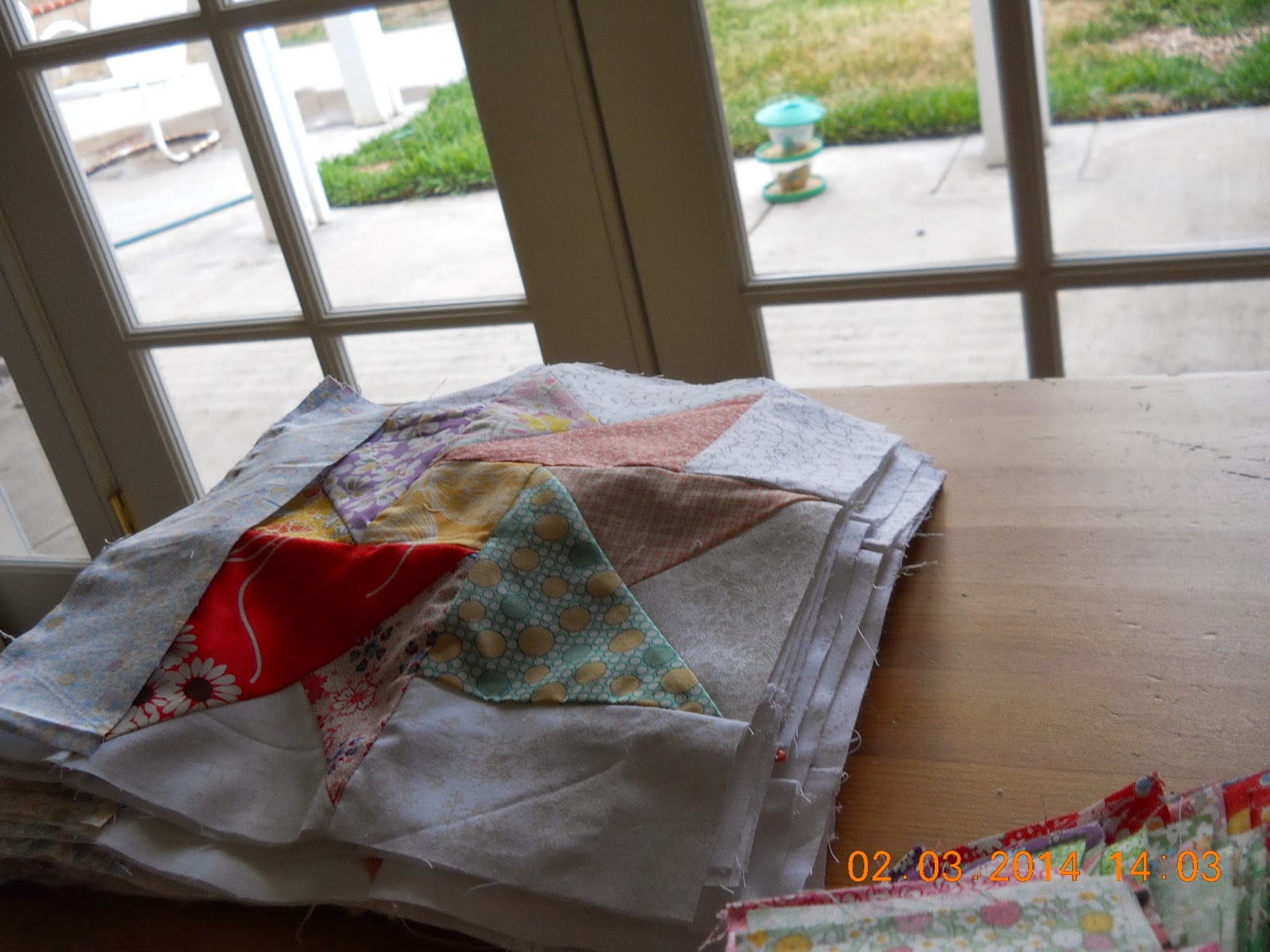 Today marks two months that this new place has been mine, although it hasn't been that long since I moved in. My two-month anniversary of moving in will coincide with Megi's birthday on the 6th. Meg (aka D4 for you long-time blog readers) is My Favorite Engaged Daughter right now, and has us all swept up in wedding plans. We even had our own Say Yes To The Dress event last weekend. Oh, and her fiance is totally awesome and I can't wait to get him officially added to the family!

But now it's time to go sit and knit for a little bit. I am just a few rows from finishing up one of my oldest UFOs--well, I guess it's a WIP again. Every night for the last week I've sat down thinking "this is it, I'll finish this tonight" and every night it gets set aside again.  Stay tuned for my hopefully finished-object post in the next day or two!