There has been progress on the quilting front--just not by me!

Here's Christine with the center of her baby quilt, for her grandson-to-be: 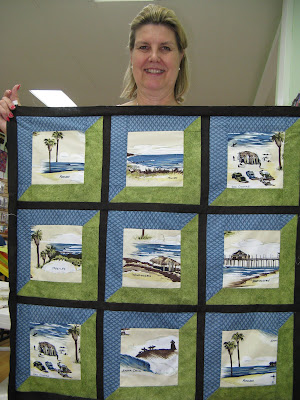 Dad's a surfer, and the images are of some of the more well-known surfing beaches in SoCal and beyond. The Attic Windows setting is a little tricky for a first quilt, but Christine is up to the challenge!


Then there is Anne's very patriotic Yellow Brick Road--why, it even has yellow patches in it! 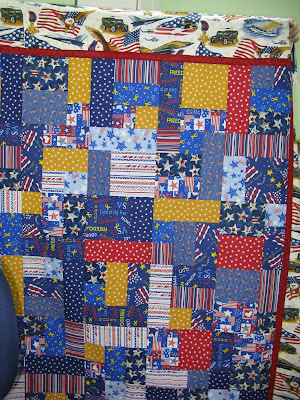 Next up: some crochet!
The baby blanket is for the same potential grandson, but this one has a nice story to it:
the corner squares were crocheted by Christine's mother, who only did the four squares. So Christine made the rest of them. 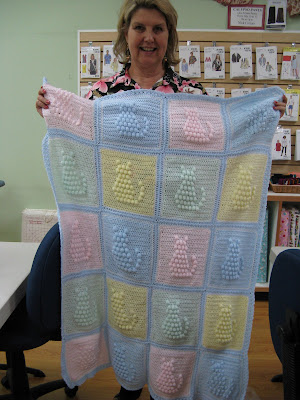 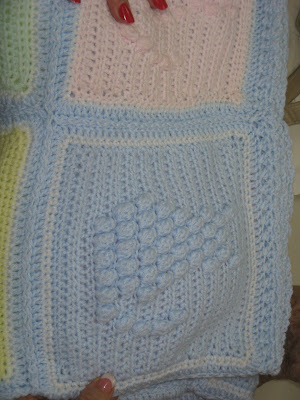 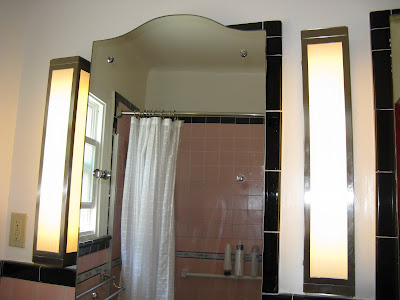 I wish I could turn the photo so you could see that thoses are cats, done in popcorns!
Very cute!


On the home front, there has been some progress now that the ankle is healing a bit more. We had a visit from Audrey's grandpa, who put up the three light fixtures in the "pink" bathroom and the new one for D4's bedroom.

I love those bathroom fixtures! What we've had prior to this has been some old rusted bare-fluorescent-bulb things that clearly showed their age. And only worked when they felt like it, which was not often. These neatly hide the bulb, and have the added bonus of lighted sides as well. The downside? We can now see, clearly illuminated, the condition of the medicine cabinets. Not so good!
(They are from Restoration Hardware, called Pierce, if you really want to know!) 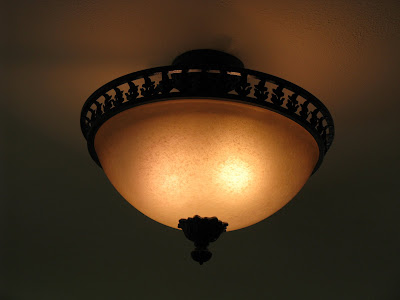 For D4's room, she looked a long time before picking this one. Not the greatest picture, but it really is a pretty fixture, and looks nice with her new bed.

So, there is some healing of the ankle going on, and the back, while pretty nasty, is (I'm hopeful) going to respond to physical therapy and exercise. I do find that, if I am fairly active, the back feels better but the ankle mutters bad words and swells up and throbs at me. So I'm trying to keep a balance of activities that are going to reconcile these two warring factions of the same body. Gosh, I wish they would learn to get along!
Posted by mehitabel at 2:49 PM 3 comments: 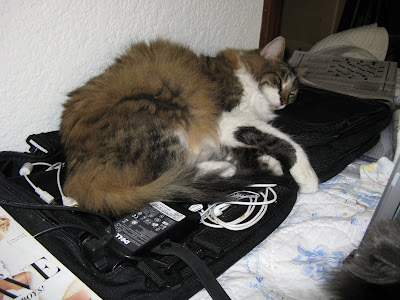 Not much! There does seem to be some sleeping...

and some computer time, too.

Hey, a boy has to keep up with what's happening out in the world, doesn't he? 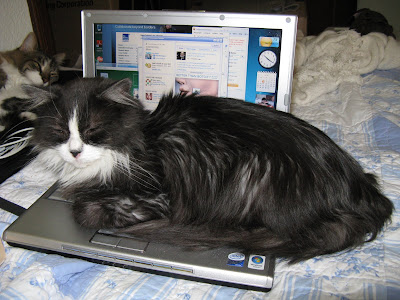 Even if he doesn't happen to read English?

There are so few websites that offer content in Cat!

So now you begin to see why posting has been sparse from this corner of the planet. There's not much going on here.

Nothing to see. Just move along!

Resting and recuperation are certainly not all they're cracked up to be. It seems to be a truism that one only appreciates the value of rest when one is tired. If one is inactive, then one doesn't get tired. One does get bored, or at least this one does! What do do?

Well, I've read the newspaper most every day. And then checked it out on the web, just to see if there was anything new happening. I've more or less kept up with the magazines that have been coming in. I've kept on top of the bills, and I've even been out of the house a couple of times to knit and to teach my class. This is good. What's not good is that all of this sitting around has made my sciatica act up, and it's no fun when your back is hurting so that you can't stand up straight. The solution (besides applying ice packs) is to get up and move around. This, of course, makes the ankle hurt, so it's a vicious cycle.
Knitting, ah yes. Still enjoying knitting but, unfortunately, I pay for it with shoulder aches. 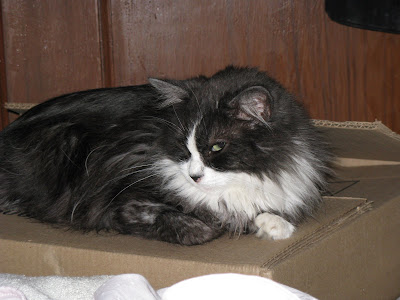 But tomorrow is another day. I have decided that, no matter what, it's now been a month since my fall/injury, and it's time to 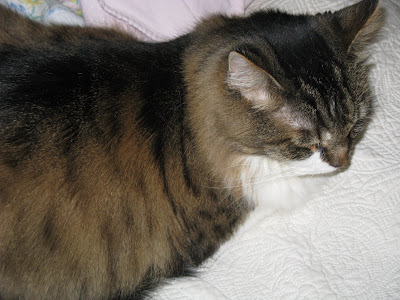 stop playing invalid and go back to living. At least as much as is feasible! There are boxes to empty, and things to put away, and more decisions to be made about things like curtains and rugs and office furniture and all the rest of that good stuff.

I may have mentioned that we had to dispose of 9 of the bookcases because of damage in handling them. There were several other things that were damaged, some so badly that they couldn't be salvaged, some that need repair, and some that we're just going to have to live with scratched and dinged. The bookcases are a major loss since there are so many books here! Even after taking many many boxes of books to the Goodwill (there's a Bookstore/ Donation Center not too far away), there are still big piles of books on tables and floors and on top of filing cabinets. So more bookcases are a necessity. What to replace them with? I'm rather inclined toward replacing them with some like the ones we lost--Ikea white plain ones. D4 is not inclined to go that route. So we're waffling, and I think there will be more shopping in our future. Meanwhile, the books are stacked.
I'll let you know how the new, more active regime works out. The boys have been quite happy with the current plan--if I'm just laying around, they are happy to keep me company. They seem to be adjusting to the "different" house pretty well, and while we humans miss Padua, they don't seem inclined to complain. Thank you to everyone who sent hugs and condolences!
Posted by mehitabel at 11:16 PM 3 comments: