A Different Kind of Progress

Getting my house and  yard ready to sell is a daunting proposition for me. After 41 years here, things have gotten pretty, shall we say, comfortable where they are?

Yes, we did a major renovation 5 years ago. That's part of the problem--it was 5 years ago!

However, the house has now been washed down, so it looks all clean and neat again. The trim that was peeling and chipping (reno contractor did a job that can only be described as sloppy) has been redone.


The yard is being tidied up. Case in point, my beautiful but untamed rosebushes. Yes, they do look scalped. That's because they are.

But  it's a good kind of pruning, and they are already (three days later) showing signs of rebounding. In fact, the biggest rosebush has dozens of new sprouts!

So it's all good. Today they are trimming two of the big trees in front, and doing some more work in the back. More pictures to come.


Meantime, I had promised Amy that I'd put the "recipe" for my Enchilada Casserole here. This dish started out as a rather naive me making enchiladas for a family dinner one night. Doubled the recipe and made 48. At the time I had an infant and 4 smallish children, so that sounded like enough for two dinners, right? Nope. They motored through that like locusts and, feeling discouraged, I decided no more enchiladas.

Then the brainstorm hit. I could layer all the ingredients in a casserole dish, or a 9 x 13 baking pan, and put all the fixings in. This became one of my staple dishes.

Yes, I use the spicy enchilada sauce and the kids gobbled it up. I never heard anyone complain!


This starts out with onions and black olives going for a spin in my beloved food processor. I've had this for *mumbledy* years and it's still going strong. I've replaced the work bowl and lid once, and the knife blade, but the motor is still happily chopping and grinding away.

So, this batch used a 9 x 13 glass baking pan, and here's how the layers went:

Sprayed the pan with cooking spray. Splashed some sauce on the bottom, spread it around, added a layer of tortillas. I used 6, corn tortillas of course (I dislike flour tortillas), then about half of the chopped onion/olive mix, some chunks of chicken (cheated and used some pre-cooked from Trader Joe's) and a good sprinkle of shredded cheese. I had both cheddar and a Mexican blend. Another layer of tortillas, the rest of the onion/olive mix, the rest of the chicken, another layer of cheese, some sauce, then the last layer is tortillas, the rest of the sauce--I put a little water in the can and shoosh it around to get all the goodness out, and the water makes the sauce go a little further too. Topped it all with cheese. 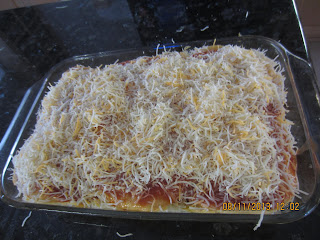 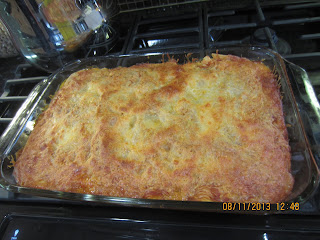 That's it! The beauty of this is that I have used the same recipe with a variety of ingredients--ground beef, especially when we had leftovers from Taco Night; leftover Thanksgiving or Christmas turkey (then we call it Turkey Adios), shredded beef and pork left over from a big roast, even done it with no meat at all.


We hosted three teenage boys from a traveling jazz choir one time--my kids were in the HS choir--and I made up three of these for dinner in my biggest casserole dishes. All gone!

And you wonder why I have trouble cooking for just myself??

This tasted really good the first day, and then I put the rest of it into meal-sized portions in glass containers in the fridge. I don't mind eating the same thing over and over when it's this tasty! 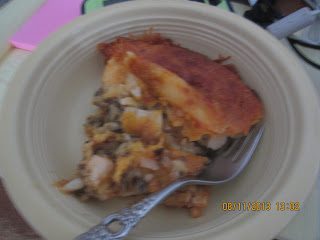 And this week? I didn't want to have to think about cooking or "what can I eat?" all week. Not with a yard sale looming and all the sorting and packing and dispersing that needs to be done!

But what about the pinwheel quilts, you may ask?

Oh come on, I know you've been wondering about whether I can just pack this project up and not look at it for a few months, right? 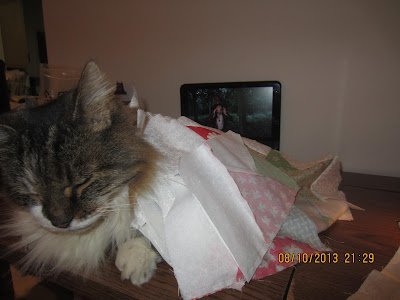 So the answer is that my Quilting Supervisor and I have been destressing a bit by spending some quality time together with the sewing machine and the pinwheel blocks.

I've nearly finished the last set of 50 blocks--halfway through the last seam on them all. My wild idea is to try to get all the tops done and then send them off to the quilters while I'm doing the move. May or may not work out, but we'll see. My back pain isn't letting me do much at a time, which makes me feel frazzled, and the sewing is a good way to get off my feet and still feel as if I'm "doing something."

So  that's progress on a couple of big projects! Now it's on to a whole day of doing these things and being hopeful to get some done!
Posted by mehitabel at 9:02 AM 3 comments: