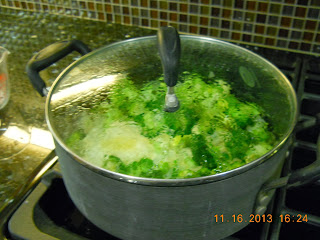 A few weeks ago, I saw a recipe for Broccoli Cheese Soup that was made without milk or cream. It sounded really good!

I had picked up all the ingredients earlier this week, and today being one of those kind of overcast days that lend themselves to cooking, and with the last of the clam chowder eaten for lunch, the time was right to make some soup!

Besides, it's also a day that I've spent going back and forth to the laundry area. 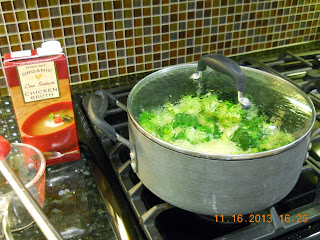 The extra (guest room) beds are being picked up tomorrow, so I stripped off the sheets and quilts and pillow shams etc and have been getting them washed and ready to pack.

I also have been trying to put together boxes, but that's a little harder for me. Don't ask me why, I've certainly put together enough boxes in my time!

Anyway, making soup seemed like a good thing to do. So I got out the broccoli and my soup pot, and got busy "chopping btoccoli."  (There was a very annoying song that my kids used to sing, mostly to harass me I think, about "chopping broccoli." I can never cut up broccoli now without that earworm! 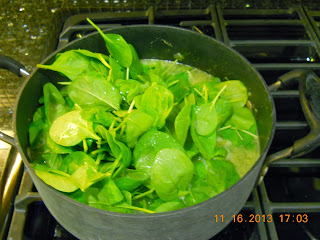 Cooked the broccoli for the length of time specified in the recipe, which is pretty much "overcooking" it. Supposed to bring out the flavor.

Added fresh spinach and cooked that for a few minutes.

Then the "fun" part. I should say right off that I am not a blender kind of person. Mine doesn't get used much, poor thing, but it works like a champ.

Took two batches to get all the broccoli/spinach/cheese pureed. 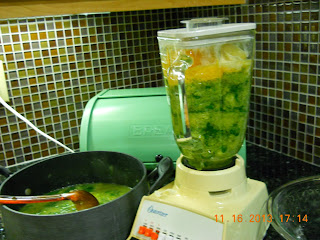 This might work really well with an immersion blender, but I don't have one, and really for as much of this sort of thing as I do, Old Faithful is just fine.

I kind of like the layers of broccoli, spinach, and cheese in the glass blender. It did puree quite nicely.

And, in the end, this is what I wound up with for dinner: a nice big bowl of delicious broccoli soup!

Garnished with some curls of shaved parmesan, courtesy of my good buddy Trader Joe. 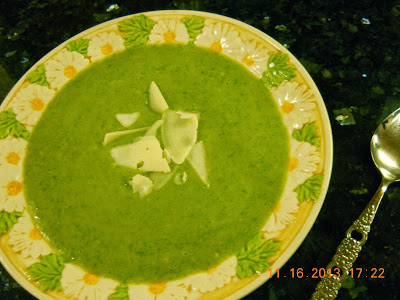 I like the way this came out. The seasoning was good--it includes some hot mustard powder and a pinch of cayenne pepper, but it doesn't have any bite at all.

I didn't have any fresh garlic, having  used up my last cloves in the chowder earlier in the week, so I used garlic salt, which was all I had. Tastes fine.

Maybe next time I'll have real garlic around. Right now, it's "use it up" time in the pantry! 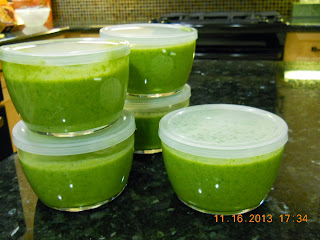 There are five more servings in the fridge now. Going to be some good lunching around here, I think!

I need to find out if this will freeze well.  I would imagine that it might, since most of the ingredients are freezable on their own. For now, this will get eaten this week so I'm not going to try. Perhaps for the next Soup Day? 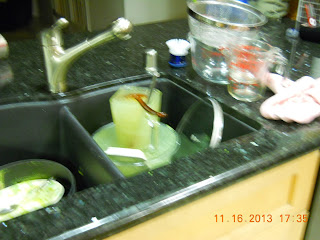 Lots and lots of dishes, pans, bowls, measuring cups, utensils, not to mention splashed around the countertops.

I did manage to get it all cleaned up--amazing what I can find to do when faced with a really repellent task (ie, making up boxes) to procrastinate on.

Now to go put the rest of the boxes together, fold the sheets and quilts and  towels, and maybe I'll be able to sit and knit for a little while tonight. Tomorrow I can start filling those boxes!
Posted by mehitabel at 8:37 PM 4 comments:

And Now For Something Completely Different

A note of explanation about the blurred quality of the following photos. I don't think it's the camera (but it might be the photographer), most likely it's the lighting and the fact that the subjects are never, ever still. 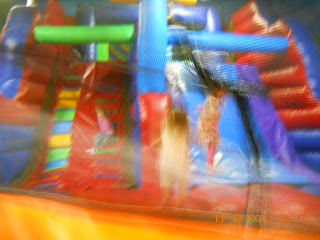 There was a birthday party tonight, for A1, who is now 6. It was held at Jumping Jack's,  one of those "why didn't I think of that?" kind of places. Talk about a great organization and a way for kids to have fun! The place is set up with "rooms" that your party can move through, half an hour in each bouncy room (there are three) and then an hour in the "cake room."

This is what a bouncer looks like when it's filled with lively bouncy kids. Boing boing boing. The room also has an area for tamer pastimes, like a pirate ship climber for toddlers. I think there were four big bouncers in this room, though I may have lost track. The second room is lit by black light. Sort of a 70s flashback, but done in glowing "space" themes.

I have no idea how many bouncy houses this room had. The third room had a basketball hoop and a few other sports-themed activities. Oh, and bouncy houses.

Lots and lots of bouncing.

Then the party moved to the cake room. 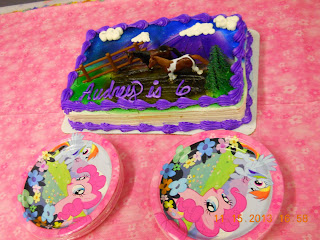 A1 loves horses. Loves. Horses. Yes, there were a couple of large horses among the gifts.

There was pizza and spaghetti, a selection of sodas, and the birthday girl's mom brought a big tray of raw veggies and dip, and a big BIG platter of cut fruit, all of which got devoured.

The spaghetti was (surprisingly to this jaded grandmother) quite tasty. Nice bite to the meatballs and the sauce was yummy too. 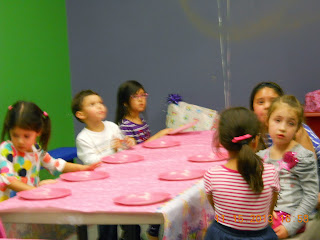 This is one of the tables full of party-ers.

Birthday girl is on the far right, looking a bit pensive. This was just before the pizza was served. 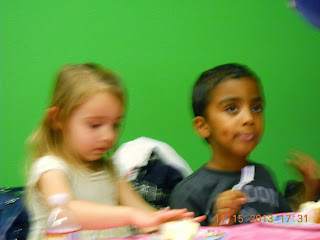 A2 and Cousin N8 enjoyed the cake.

Yes, they are always slightly out of focus like this. Believe me, this was the best picture I could get of them. 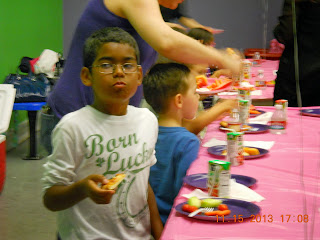 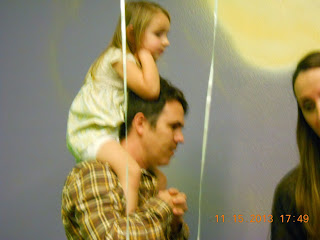 A2 with her uncle Jeff--well, she has two uncles named Jeff, but since the other one lives in Conn., he wasn't available to hold her up so she could watch big sister open presents.

However, he may be coming out soon, as he's said he'll come help me move.

Oh yeah. This was all a nice distraction from escrow worries.

My other activities today included getting a flu shot and meeting with a CPA to talk about some financial things that have been concerning me. Turns out that one of them was easy-peasy, and the other had him scratching his head. He'll look into it and get back to me.

Tomorrow will be filling boxes. Time to start emptying bookshelves, I think. Now there's a task to make me flinch!
Posted by mehitabel at 10:35 PM 1 comment:


Maybe one of these days/months/years I can start a post off without having the disclaimer about how oh my, time does fly when you're having fun, or even when you're not, and wherever has the time gone that I haven't spent blogging?

Well, I can say that for this month, and the last few, it's been flying by pretty fast, and accompanied by a world of changes.

I am now in escrow on two properties--one to sell, one to buy. It actually begins to look as if I dare to hope that they might actually both close successfully. If you've ever been in escrow, you know what I mean. I really do think the only thing that compares to being in escrow for discomfort, uncertainty of outcome, and general stress, is pregnancy. I will not carry that simile any further. That would be painful for all concerned.

Anyway, there are four pictures here of what may become my new home. It's a 2 bedroom one-story condo--more like half of a duplex. Once it's all a done deal and I'm really moving in, I'll get more pictures. It's a smallish development and very nicely landscaped and maintained. I can hardly dare to believe that the only outside maintenance I'm going to have is what you see in the two pictures here--a nice sunny patio (faces south) with a little bit of planting area if I choose to do anything with it other than keep the sago palms.

And yes, that is the trunk of a palm tree. At least it's a pretty "cute" palm tree, the kind that is just slightly taller than the pergola. It has a respectable spread of fronds, too, and it's not one of those spindly skinny things with a teeny tiny cluster of frill at the top.

I could learn to love a palm tree. It's easy to take care of!

There's another small patio too, off the second bedroom. It's pretty shady and is part of the front entryway. I'm currently planning to use the second, smaller bedroom, as my "sleeping room." It's big enough for my bed and hopefully both dressers, and that way the big open sunny room can be my sewing room/craft room/studio/whatever. I might as well have the most pleasant place be the one where I'll probably spend the most time!

Meanwhile, there are still a lot of things left in the big old house that I won't have room for. So I guess I have to try to sell some of it, if I can, or palm it off on family. I've also been reminded that my "moving crew" is older than it used to be, and some of them are injured. 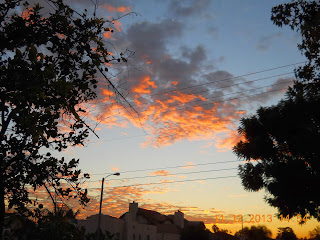 I won't complain about them. After all, I'm not at all the energetic young thing I was the last time we moved. That was 41 years ago!!

Changes, changes. Always changes and the need to adjust my attitude to make the best of the new situation. At least in this case, it's going to make for a much easier life in a lot of ways.

It will be interesting to see what the cats do when they have to share half as much space, and all on one floor! 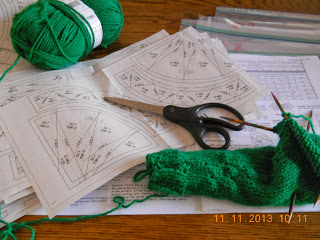 I have managed to get a wee bit of quilting time in, fortunately. Well, prep work.

Cutting out papers for a paper piecing project counts as quilting, right? I picked this one because it was available--much of my quilting "stuff" is in storage or in the garage.

I'm also on the last sleeve of the last of the four little sweaters, so this was my "rest my hand from the scissors" activity.  Monday was the monthly meeting of the "Dear Jane, I Hate You" informal group--at least Anne was working on a Dear Jane block. 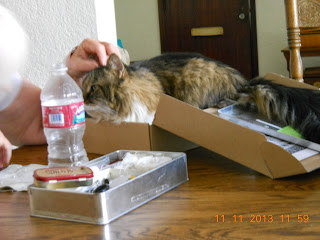 Well, as you can see in the picture to the right (or that's where it should be), HiHi had other ideas of what she should be doing! She is HiHi's babysitter when I'm gone, and she will spend lots of time with him when she comes over... in addition to feeding him. He was rather disappointed that she didn't open a can for him this day, but he did take over her box of project so she could do what he clearly saw as the most important activity of the day--petting the cat! 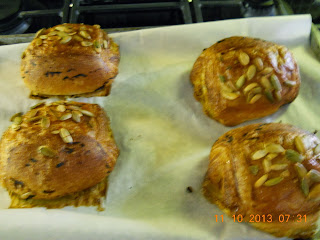 The last picture is a gratuitous food shot--pumpkin croissants from Trader Joe's, which are twice as delicious as they look!

Time to start packing and winnowing possessions again. This is the most not-fun activity on my agenda, and in fact, it's so not-appealing that I think I'll go get my flu shot instead!
Posted by mehitabel at 10:23 AM 2 comments: