Care And Feeding of an ET*

*ET is my Evil Twin. She tends to shop for yarn "just because." Turns out, I'm not the only one who has one. She has a way of finding playmates, and this weekend turned out to be a banner one for several of them! 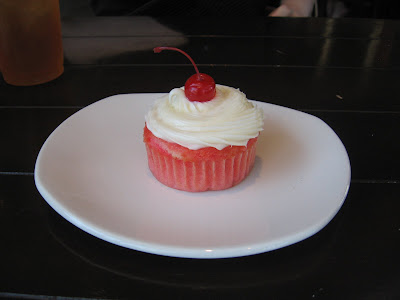 ETs love cupcakes. Well, they like anything sweet. They travel best on iced tea, with or without pomegranate juice added.

ETs can find really cute places to hang out. They are, as you may have noticed by the cupcake choice, particularly fond of the color pink.
Therefore, the Pink Porch is a prime hunting ground. Wait, what's on those PINK flyers in the windows?? 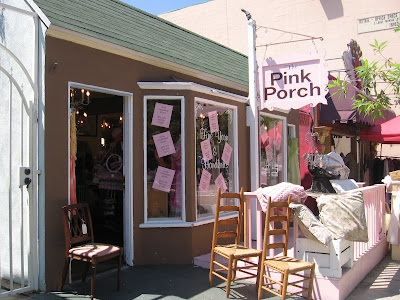 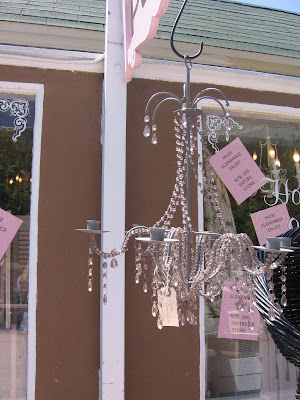 Look closely... they say 50% off entire stock!
No the chandelier did not come home with me. 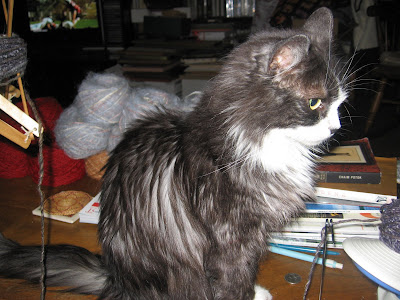 Neither did the punchbowl. However, there were a couple of items that did.
Simon helped to wind them into balls. Well, not everything needed to be wound, so it didn't take the entire evening to get it all wound up. 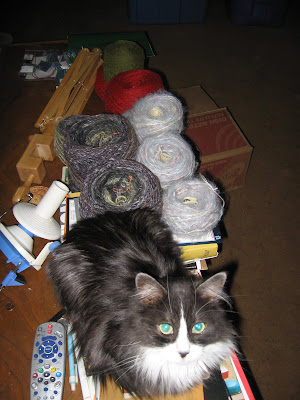 He wants you to see how good he looks with Noro Transitions, Classic Elite Bravo, and red Cascade Baby Alpaca Chunky. There might also have been some sharing of Debbie's Bliss too. However, this post is already too photo-heavy so I'll tease you with a promise to "bare all" soon. 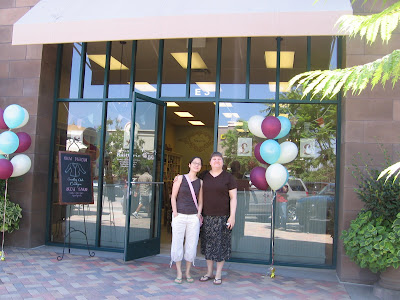 But ET isn't happy with just a trip to the Valley on Friday. Oh no. She found a couple of other playmates on Saturday as well. Braving the horrors that await on I-5 South, this intrepid crew of three went into the deepest OC. All the way to Ladera Ranch, to La Petite Knitterie.

There were spinners there!
There was wonderful handpainted yarn by the incredible Lori Lawson. (I do believe that's her at the spinning wheel. The balloons are for a birthday. The cake was in the back room.) 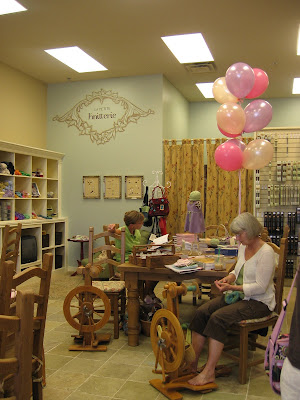 Madgik couldn't resist the siren song of the silk. Oh, did I mention?? They were having a sale. 40% off on many things, 10% off on the rest of the stock. 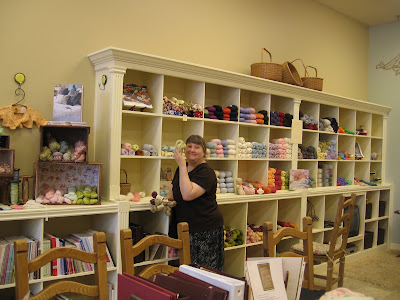 Patty found some handpaints too, in wonderful glowing colors. I hope the two of them will be showing you more pictures on their blogs. 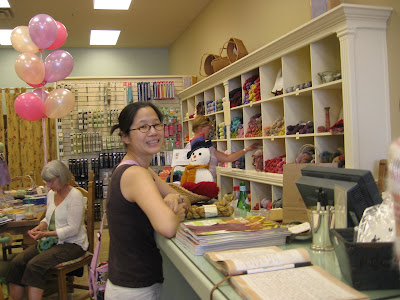 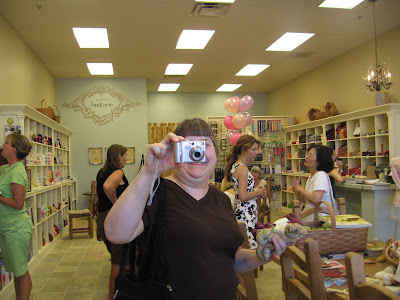 Then there was lunch. This is a Pacific Cobb Salad. 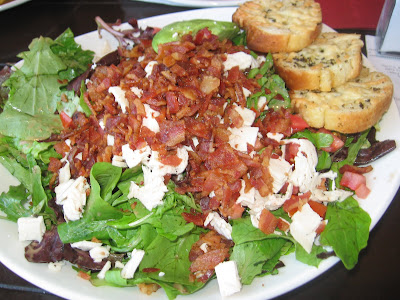 And a roast beef sandwich.... 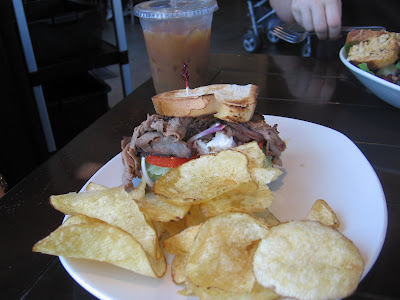 And this wondrous concoction of apples, cranberries, walnuts, greens etc... as well as the cupcake previously seen. 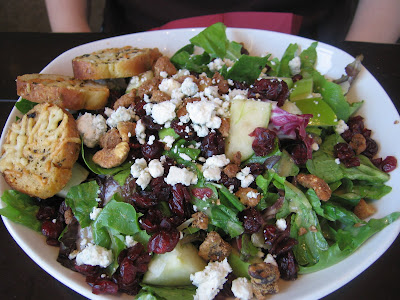 ETs need to eat. Part of the "care and feeding" means finding great places to eat. This one was called Pacific Whey.
My haul:
some handpaints--to go with my Can't Elope from a couple of weeks ago
some patterns--interesting cardigans
and a book of mother-and-baby designs, from Rowan, designs by Martin Storey. Plus a really cute pattern for baby (and teddy bear) sweaters, from the people who brought you the Wonderful Wallaby. 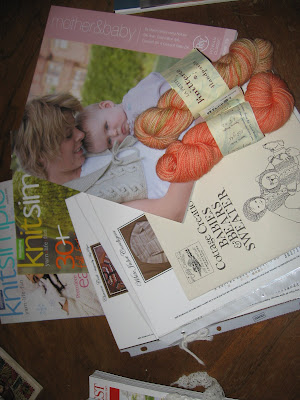 You cannot venture down I-5 without a stop at this iconic location: 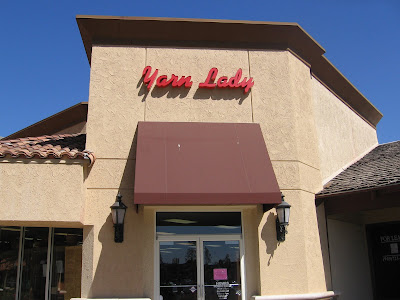 Well, at least we couldn't. It's amazingly freeway-close and accessible, and it's HUGE. I mean, HUGE! They have an amazing selection of all kinds of yarns, from the most basic--more colors of Cascade 220 and Encore than I've seen on this coast--lots and lots of Colinette, Rowan, etc etc. And a world-beating collection of floofy, fun-furry, glittery, shiny, novelty yarns too.

But they weren't having a sale. And ET's been hideously spoiled, and besides the thing she liked best was the Colinette Cadenza and it came in three colors she couldn't decide among. When faced with a difficult choice, ET often will refuse to choose and just pick up her marbles and go home.

What a weekend. And it's only Saturday night! It's been rumored that there is an outing planned for tomorrow as well, but we'll just have to wait to see if it comes off first.

Found this little button today while blog surfing. For some reason, though, it doesn't want to play nice on my sidebar. But it's such a cute idea! More info on it here.

The idea is briefly that instead of JOINING a Sock Yarn Club, you can go stash diving into your own collection and get all excited about the "new" yarn you've found.

I think this could easily be expanded to any type of yarn you might want. For instance, I have some yarns that have been kicking around since my last trip to Australia. In 1988. (Makes it sound as if I've been lots of times, doesn't it? Actually, twice. Both times in 1988. But that's a long story for another day. Ah, Sydney. North Richmond, Windsor, the Hawkesbury River, the Blue Mountains. Bowral. Stop me now before I go book a trip right now!) I have yarns that are older than that.

Moving on. Here's the latest on what I'm starting to think of as the Great Freezer Farce. Our local electrical utility has a refrigerator/freezer turn-in program which they advertise heavily. Of course, that's the PR arm of the company at work. The arm that's actually in charge of picking up the appliances? Not so good.

Consider this: I have an elderly upright freezer. It used to sit side by side in my garage with my old refrigerator, both being very handy when I had a horde of people needing to be fed three or more times a day. Go through 2 gallons of milk at a meal? Not a problem when there's a spare fridge! Need lots of ice cream to get through the summer? How about a place to store that turkey that was on sale? See, extra appliances are good when there is a need for them. Once the need dwindles, though, those appliances sit out there eating up perfectly good kilowatts, and don't get enough use to justify the expense.

So. I called. I made an appointment for a pickup. Monday, July 2. I will save you the litany but today was the 4th appointment I had made. Got a call this morning. Truck is broken down. No pickup. Rescheduled for next Tuesday. That's 6 weeks, folks, and the freezer is still there. We'll see if they make it the next time.

At this point, it's the principle of the thing. They say they want to pick it up, they tell me they will, so by golly I'm going to hold them to that. Even if I have to deliver the thing myself to their corporate headquarters. Hey, Electric Company, I know where you live!!