The sink is in, and so are the granite countertops. 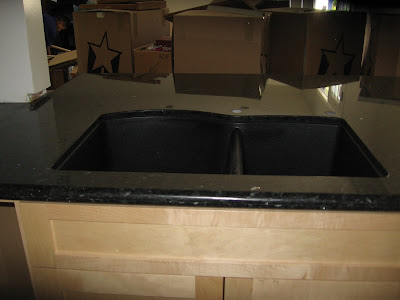 Yes, the sink is black. One of D4's friends told her it doesn't look like a "real" sink--she thought it looked more like a liner. It's black granite, and one of the nice features is that it's the same material all the way through. So if it gets scratched, it's just scratching down to another layer of the same color, and shouldn't show. 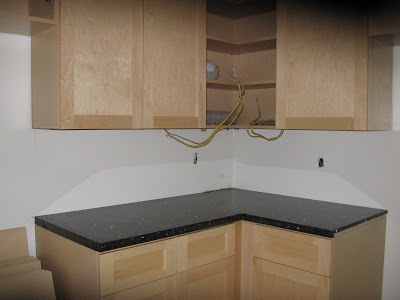 Stove corner. No stove yet, but it's coming.
Well, first we have to buy it. Then it has to be delivered.
THEN it can be installed! 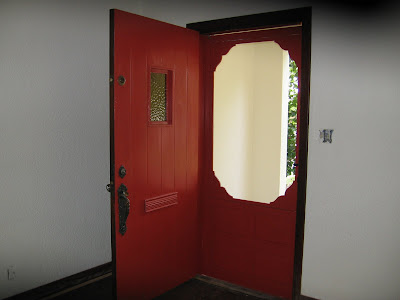 Front door has been painted red. No special reason, just kind of like the idea.

However, the doorknob is now broken, so it won't open from outside with the key. New lockset, anyone?
and: 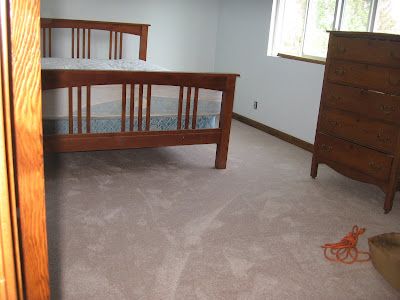 ...now there is carpeting in the bedroom and closets upstairs, and on the stairs, too.


This picture was taken while the carpet-laying was in progress, so I didn't get a shot of the stairs. They were covered with guys nailing down tack strips, not the most inspiring sight.

Unless, of course, like me, you're counting down the days till you can go home again. I think we will give the carpet solvent fumes plenty of time to dissipate, though. I need my last few remaining brain cells! 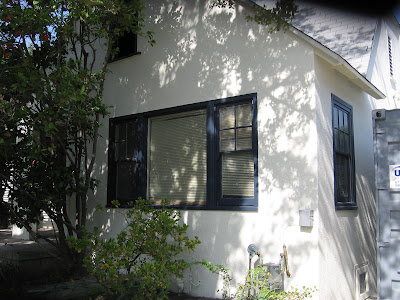 Corner of the house, showing the new colors. The trim is a dark blue, which in the color chips seemed to have a lot of green. In daylight, and on the house, it seems to veer off to the purple part of the spectrum. Just like the Purple People Mover, aka Yarnmobile. Guess I'm doomed to purple-iciousness no matter what. 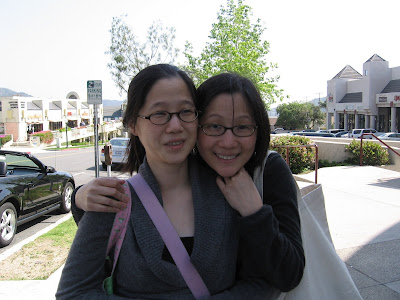 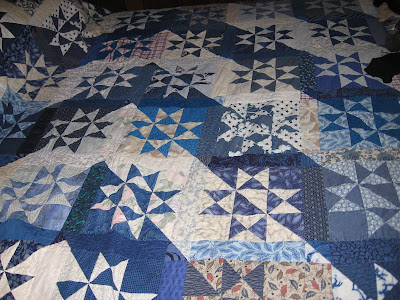 CoffeeCat Patty brought her twin sister to our Monday knitfest! Such fun, meeting the charming Dr. Jenny! And, she's a speedy knitter just like our Patty!

And, finally, a look at one of my "older" quilts. That's the nice thing about passing them along in the family: they occasionally resurface and can be enjoyed all over again.
This one is a pattern called Massachusetts Cross and Crown, and it's from a book by Marsha McCloskey which is currently buried in the bins in the driveway, or I'd tell you the title. This quilt is on the cover, though.
When I was working on it, I took it along to work on during a "quilters' weekend" at a friend's cabin in the mountains. She was trying to start a business, providing weekend getaways with a quilting theme.
Anyway, that particular weekend she'd invited several people including the then-president of one of our guilds, who'd decided that she didn't like this quilt. Every time I took it out to work on it (and it's a fun, addictive technique) she would make a comment, finally declaring that it was the ugliest quilt she'd ever seen! 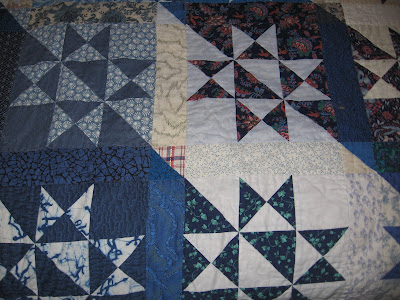 I don't happen to agree with that assessment; in fact, it's always been one of my favorite things! It now lives with D5, who's been sheltering her mother and sister during these last few weeks of rootlessness. She brought it out for us to sleep under, and it's quite cozy!

I love the scrappiness of it. And blues are always right! By the way, the white fabric with the blue streaks in the lower left star happens to be one of the earliest batiks that was offered for sale commercially, at least in "our" neck of the woods. Now, batiks are really popular, but back in the late 80's they were pretty rare!
Posted by mehitabel at 6:38 PM 10 comments: