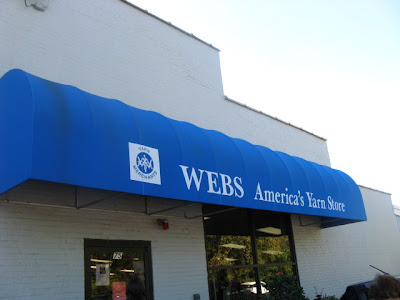 There's one place I need to make a pilgrimage to whenever I come east. I 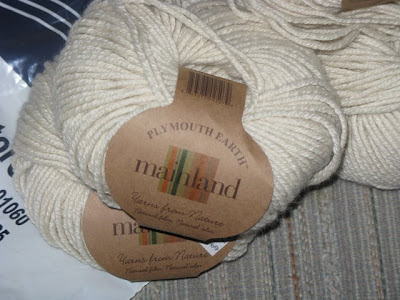 really like to have an hour or two, rather than a meager half-hour, when I come; but I still managed to find a treasure on this trip! I love the way this yarn looks and feels--so soft! There were only 4 balls of this color on the shelf, so that's all I got; but there are more on the website. It comes in "natural" colors and I'm already thinking that the grey would make a lovely sweater. For me. Mmmm!

One reason I didn't have much time at Webs was that I went to see my dad. 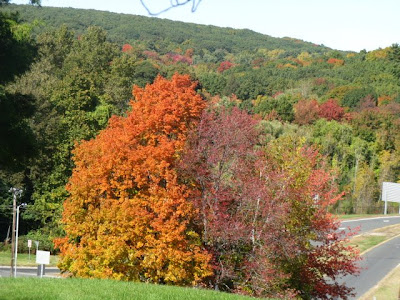 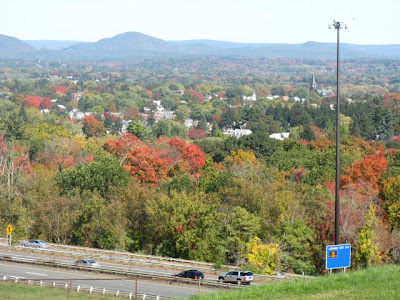 his is the view from the parking lot, in a couple of different directions. It's too bad that I'm here a little too early for "peak color" but it's already well under way. Some of the trees seem to glow with an inner fire. It's indescribably beautiful.

Usually, the hills and mountains are just a mass of greenery, which while lovely is a bit uniform. But once the leaves start turning, each individual tree takes on its own color and you can really see them standing apart. Makes driving down the Interstate kind of dangerous, because my tendency is to get distracted and go Oooh! and Aaah!

More later. I'm driving all the way to the bottom of Connecticut today...
Posted by mehitabel at 6:04 AM 4 comments:

Trippin' Out (of town)

T'was quite a shock to look back and see how long it's been since I've posted! Not a good thing at all. 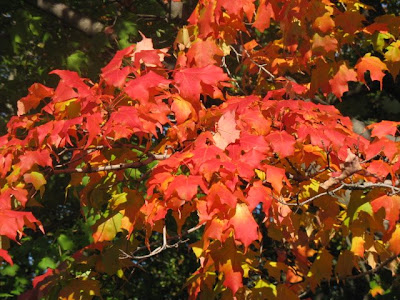 So this post is coming to you from a different location than usual.
A location where the view includes lots and lots of this type of thing. Yes, this is Fall Color. Not a usual sight in SoCal but pretty common in New England.
This particular maple tree is in the yard next door to my brother's house, which is where I am currently staying.

This is my brother's cat. Her name is Tangerine, Tangee for short. 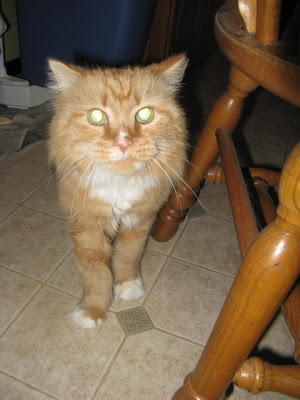 She is very pretty but also rather schiztzy. She does not like me, but I believe I fall into the general category of "person" which she doesn't like either.
I really don't do anything to harass her. Except breathe. And walk. And talk.

Oh well, she'll adjust. And if she doesn't, well, I'm leaving on Monday anyway!
It's a shame because she's the kind of fluffy plush kitty who just makes me want to hold her and cuddle her and talk baby talk to her. 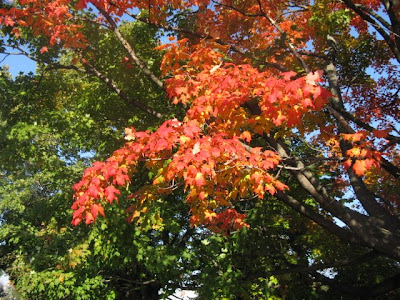 This is not the same tree. I know it looks a lot like it, but it's not.

I will say, though, that it's harder than I thought to get good "color" shots. For one thing, a lot of the driving I've been doing has been on the Interstate or on busy roads. The kind where people would not take kindly to having me pull over and whip out my camera. That kind of behavior is known out here as "leaf peeping" and there is a place for it.
That place is "not on the Interstate." 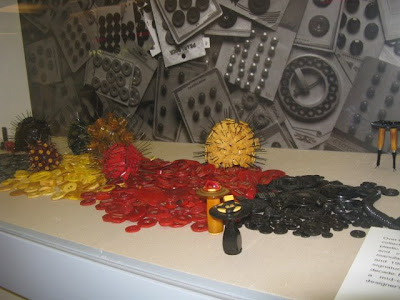 I found this wonderful collection of buttons at Ontario Airport, of all places! The first couple of cases didn't seem all that interesting--apparently some collector has set the exhibit up, and each case features one of her many collections--but the buttons caught my eye, and then I started looking more closely at the cases.
I took several pictures and then realized that I was there to catch a plane, and if I spent too long taking pictures of the assemblages, I was going to miss said plane. As it was, I got to the gate just before they called my "group" for boarding. 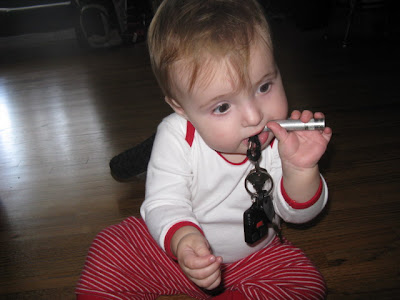 There are more "art" pics onmy Flickr page--just click on the badge over there to go see!

I'll close with this rather pensive shot of Missy A, who apparently is into taste-testing keys. This set has a nice metallic tang to it. She found them in my purse and pulled them out for sampling.

Have I mentioned that she's getting much more active these days?? Cute, too.

I will try to get caught up on posting this week. As I mentioned, I'm at my brother's house, came back "home" for my class reunion, and getting in some time with the bro, the father, the cousin, the sons' families, etc. Good stuff!
Posted by mehitabel at 6:15 PM 1 comment: