Yet Another Road Trip 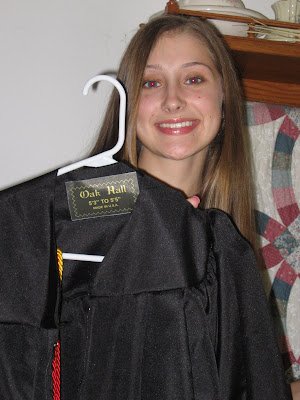 Did I happen to mention that the reason for all this traveling around is that we have a new graduate in the family?
Here she is, Grad Girl herself, aka Oldest Granddaughter Alyssa, just ready to run out the door with her cap (lavishly decorated in school colors orange and black) and gown (adorned with the red and gold cords of the National Spanish Honor Society).
Too bad Gramma isn't proud of her, huh? Well, she's a winner.
Heading for college come fall, for an interior design degree--the program is intensive, and she'll earn a BA in 3 years. She'll have lots of architecture, CAD, and drafting classes. She's been working part-time for an interior design firm after completing an internship with them.
Meanwhile her brother (last year's grad) is transferring to the University, where he plans to major in theoretical math.
I think #2 and Mrs. have done a great job with their kids!! 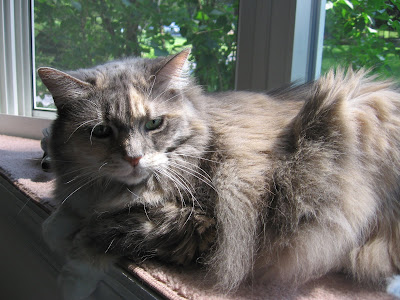 Fur therapy for kitty-love-deprived grandmother: Miss Kitty, all 17 or so lbs of her.
She's as pretty and mellow as she can be, and our relationship is cemented every time I see her--she adores being brushed, and I love brushing her. 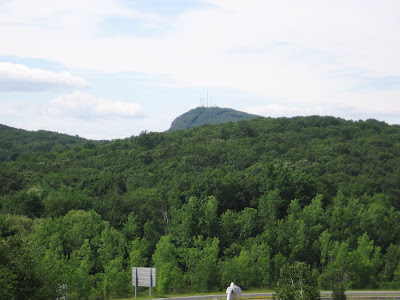 Purrr!
They have another cat, but I have never seen shy little Snickers. Maybe one day!

Massachusetts mountains--they're green. Northeasterners know this, but in SoCal mountains are either totally barren brown sand lumps, or black chunks of dried-out vegetation.
Me, I love the green.

This is one of the views from the hilltop whereupon sits the Soldiers Home where my dad is residing. At nearly 90, he's still feisty, still sharp as a tack, in spite of failing eyesight, failing hearing, and the residual effects of a stroke. He's planted a garden here--there is an area set aside for the residents with raised beds that are easy to tend from a wheelchair. The Master Gardener is growing (what else?) tomatoes. 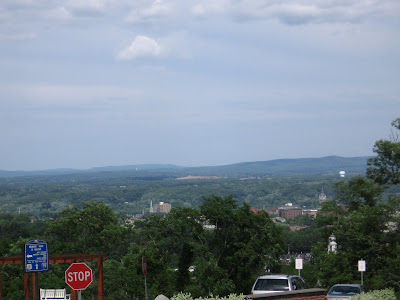 Another view from the hilltop, looking north and east. Believe it or not, this valley is home to some major industrial zones--but the trees hide it all. 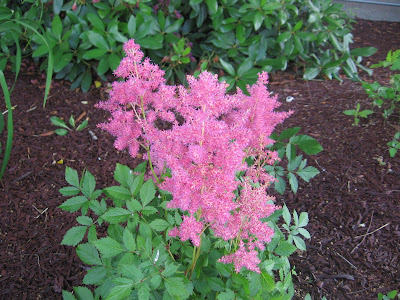 Even along the interstates, and the major highways, there are few areas where you're aware of the city you're driving through. I drove 80-some miles through Conn yesterday (each way) and the only city I saw was Hartford. All the rest was trees, including a lovely watershed area.

Another flower picture. Isn't this pretty? I think it's astilbe, but I'll have 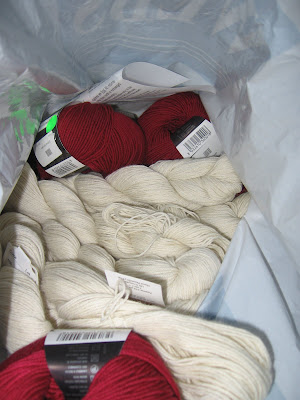 to look it up to be sure.

One last "confession." Perhaps you can see the name on the bag? I just opened it and took a picture of the contents.

Yeah, it says Webs. After all--that mountain in the picture above? It's just a little way from Webs. I told you, you can't see the interstate for the trees. So I went to see my father today, took some pictures, and then ET steered the car on the Northbound side of I-91 instead of heading south. Bad ET. Bad bad me--oh, but that laceweight alpaca is the softest nicest thing I've ever ever felt. And the red Zarina? Well, I had one ball, and it was lonely. So I bought it some friends. And I hit the magic number for the Webs discount, so it's all good.

July is going to start my yarn fast. My clean-out-that-stash-fest. Think I'm just talking? Hah! I have found a resource that I think will be just what I need. As soon as I see if it works the way it promises to, I will share the info.

Promise. Until then, I have to go figure out how to get this into my suitcase... and then how to lift it all, since I'm traveling home alone. Wish me luck with the airline! As promised, here's the latest version of the chevron scarf--one repeat of Feather and Fan, plus 3 edge stitches. I'm using two skeins of Noro Cash Island (wool, cashmere, nylon) alternating every two rows. This is version 2; version 1 was 2 repeats, but it would have come out wayyyy too short. I originally thought even short would be okay, but there wouldn't have been enough to even tuck into a neckline. And, since these were two orphan balls that were on sale at Webs, well, this will have to do. There are lots more colors to come, although both balls have a LOT of black. We'll see how it looks! 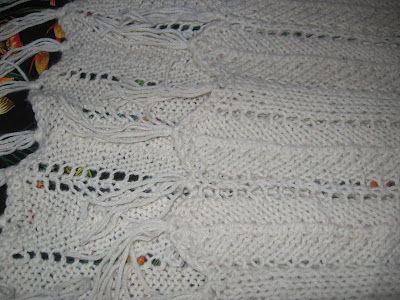 Closeup of the afghan that I used as a background. This is one my mother made, in a creamy color, and it's HUGE. Mama made blankets! The pattern is very interesting--I may try to decipher it for my next scarf. (Yeah, I have some red Cash Island, 3 skeins, probably enough for a good long scarf.) I am fascinated by my mother's work, especially since she never did learn how to read patterns. She'd just work at something till it looked like the picture, and she did this with crochet, and tatting too.
Me, I've never been able to learn to tat. She really tried to teach me, too, for many long years! 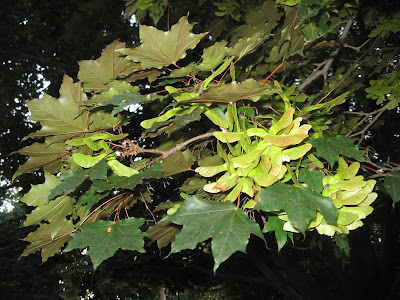 Because there was just a small road trip today, with no photography involved, I'm treating you to some greenery.
These are seeds growing on a Burleigh Maple, one of two that live in my brother's front yard. The leaves have a nice russet-y tinge when they mature, and they turn a lovely chestnut brown in the winter.
It's been a very long time since I saw maple "helicopters" since we don't have a whole lotta maple trees in SoCal. Oh, our first house had a lovely tall thin maple tree in the side garden, but the next door neighbor used to prune it straightup from his side of the wall. It always looked a little odd, and when we moved out of the house, he trimmed all the branches on the tree so severely that it was dead by winter. This man was the kind who did not allow his grandchildren into the house--they had to sit on the front steps, and after they left he'd scrub the steps down with bleach. My husband referred to the guy as Twinkletoes.
All this because I wanted to share some maple seeds. Well, they are pretty and interesting anyway! 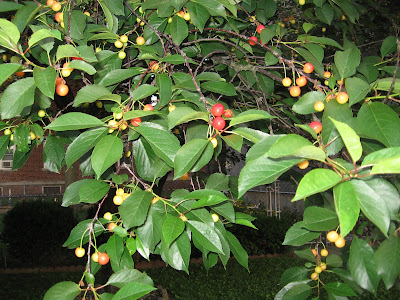 Cherries on a cherry tree. SoCal is also rather light on cherries, especially the sour "pie" cherries. But they are so pretty on the tree!
Okay, time for strawberry shortcake and knitting. This house has cable--whee!--and I get to hold the remote, too. What a treat! I have already watched one episode of What Not To Wear and two of Ten Years Younger.
Even with cable, my taste in TV is trash. Sigh.
Posted by mehitabel at 3:00 PM 3 comments:

Quilts! Where is a good place to see quilts on a random Saturday? 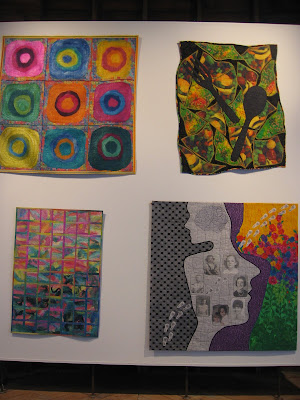 Hint: takes a few hours of driving northward.
Of course, when the route is mostly through Vermont, it's a very pleasant drive indeed.
We took the interstate--I-91, the one that runs by Webs--north to White River Junction, then cut across Vermont via Route 4 and Route 7. Took us past Quechee Gorge, through lots of lovely towns and even more lovely countryside.
Finally made it to our destination: the Shelburne Museum! 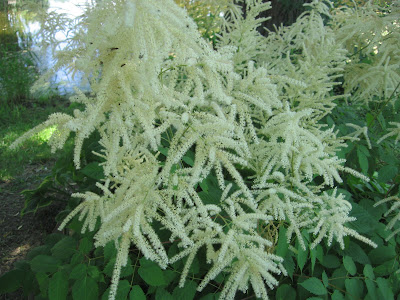 What a place! I can't begin to list all the delights in this very interesting museum--although, I don't think "museum" conveys the full flavor of the enterprise.
Electra Havemeyer Webb was a collector. Her tastes were eclectic and her purse ample, so her museum has lots of room devoted to some of her favorite things.
Quilts.
Dolls.
Trains--yes, there is more than one. Even a whole train station.
Dollhouses.
Samplers.
Folk art of all sorts--painting, sculpture, weathervanes. 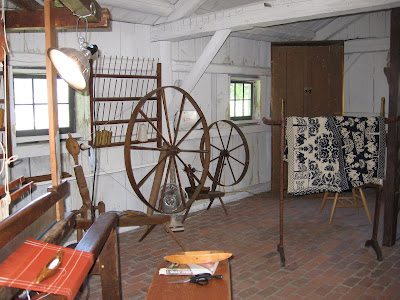 Spinning wheels and looms have their own building.
So do the print shop, and the blacksmith shop. The blacksmith was making a large hook when we were there, chatting about the original owner of the shop on the premises and telling us what he has in his own shop, at home.
The weaving shop has a full-size operational jacquard loom, as well as lots of different spinning wheels and other looms. 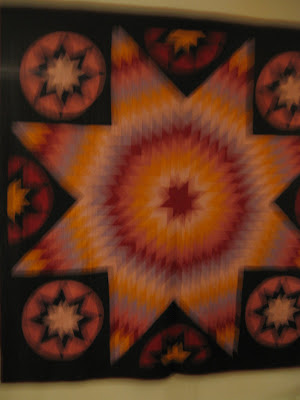 Art--one building is Impressionist art.
Wheeled vehicles, including a couple of stagecoaches, peddlers' wagons, medicine wagon...
A lighthouse.
A schoolhouse.
A meeting house.
A recreation of an early New England family's house and outbuildings, with all of their furniture and tools, so well done you almost think you can hear them talking in the next room.

The round barn is the visitors' center, and it holds the current exhibit of contemporary Vermont quilts.
It's also got an exhibit of chandeliers, ranging from pretty to funky to downright weird--how about a chandelier made of plastic tableware? Or covered in feathers, fur, lace, and tassels? 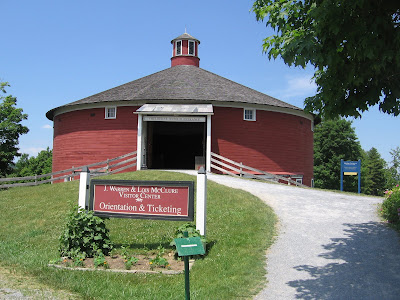 There's a whole building devoted to a miniature circus parade, and carousel animals.
You can adopt a carousel creature if you'd like, as they are in need of restoration and your sponsorship can provide it.
Oh yes, there is a carousel on the grounds.
As well as a steamship.
If you are thinking that you'd like to visit Vermont, or any of the New England states, don't miss the opportunity to visit Shelburne.
Seriously. 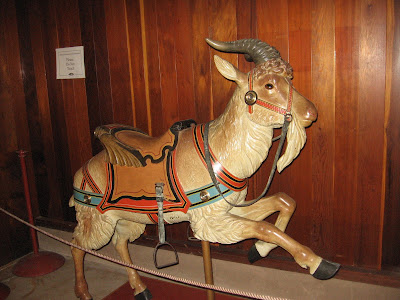 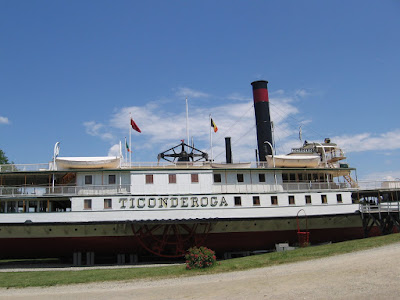 The steamship Ticonderoga. Used to ply the waters of Lake Champlain--which is actually just a few miles away. Now it's got a rather interesting new career, wouldn't you say?

Oh, and the flowers are glorious.

So for part of the drive up, I wound up two balls of the Noro Cash Island, cast on a ripple scarf, and knitted happily away. (I told my brother that when I drove, he'd have to knit, but he convinced me that wasn't a great idea.) 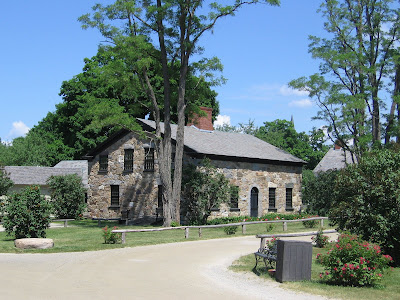 We had a great time exploring. The docents were very interesting, and friendly.
One of them in particular was very chatty, and as we were saying goodbye to her, I happened to look at her name tag. Her last name is the same as my maiden name--my brother's name! 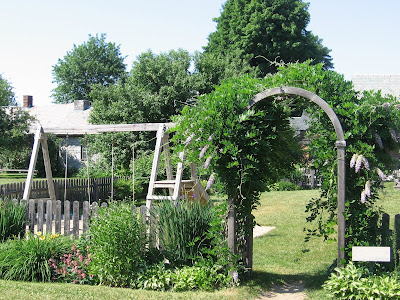 Small world, huh?
We rounded out the day by meeting up with my cousin, his wife and daughter, for dinner and some good talk. Then we headed for home.
I got to knit some more on the way home--I opted to take the "dark" part of the drive, after the sun had set.
We also saw a double rainbow. At one point, the bottom of the arc touched down in the valley just a mile or so ahead. Quite magical.
Not so magical? Running into the very heavy rainstorm that was responsible for the rainbow! Quite a gullywasher.

So, back home again in the same day. But what a day!
Oh, the scarf? It got pretty far along, and then I realized that I was going to have a scarf that was 9" wide and 12" long. So it's been frogged, and re-cast-on at half the width. Now it's about an inch and a half long, so when it gets longer I'll take its picture and post it.

More road trips in the near future, including the one that's the reason for this whole trip. Stay tuned?
PS--if you click on my Flickr badge, it will take you to my page where you can check out all 175 or so of my Shelburne photos--in the set called, un-originally enough, Shelburne Museum!
Posted by mehitabel at 4:11 PM 4 comments: