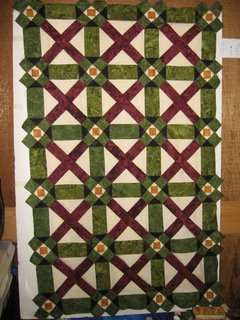 Well, here it is. The in-progress shot of my Asilomar project quilt, destined for Daughter Kate's wall. She chose the colors, I chose the pattern. There's a border yet to be added, and then it will be ready for quilting. I was planning on doing some work on it tonight, but turns out that's not going to happen. We had a "workday" here today and I got good and tired out. Oh well, it's all good!
Posted by mehitabel at 5:30 PM 1 comment:

Been trying to post some pictures, and for some reason they are disappearing into the ether. Blogger and I have to have some serious chats about this. In the meantime, I've been trying to get my tax stuff together so my Wonderful Tax Guy can whip it all into shape and tell me how much I owe Uncle Sam and Uncle Arnie. This has meant putting an entire year's worth of transactions into Quicken.
The reason this has been frustrating is that I had already put most of last year into Quicken. Unfortunately, the data is locked in the dead hard drive of last year's incarnation of the Computer From Hell, or at least, the Computer From A Seriously Defective Place. (When my son-in-law told his daughters, age 6 and 8, that they have a better computer than Gramma's, it's time for an upgrade.) The backup method chosen could have been better: never try to back up on a floppy disk with a diseased floppy drive. Nuff said? So I've been trying to figure out how to do this, and not have to redo it AGAIN. Perhaps there is a miracle in my future.
Or a shopping trip to Fry's.
This has seriously cut into my knitting and quilting time. However, tomorrow the Hope Quilters (the newest incarnation of the former Ugly Quilters, so called because we made pretty quilts out of ugly fabrics) are meeting to work on some more quilts. The output is pretty impressive, I have to say: we've sent quilts to City of Hope kids, to Casa de Esperanza in Tijuana (there's that Hope thing again), to Maryvale, and to Katrina-displaced dialysis patients. I'll try to get pictures and see if Blogger will let me share them. We're still using some truly awful fabrics, but every so often Ellin will sneak in some "pretty cloth" just because she has trouble doing uglies for so long. Ugly fabrics, by the way, are those things we bought in a moment of sheer optimism and then, five or ten years later, look at and wonder what on earth we were thinking. What was the designer thinking? Or drinking. Or smoking. Or whatever.
Posted by mehitabel at 11:26 PM 1 comment: