One thing about getting quilts done in groups is that when the finish line approaches, it's very satisfying to knock out a couple of finishes very quickly!

That's the story with the first two of the Pinwheel Stars. If you've been following this saga for the last couple of years, you'll know that my desire to make one--ONE!--of these sent me down the slippery slope that eventually ended with a total of SIX quilts.

Moving put quite a crimp into my production on these. Hard to sew when everything is packed up so the house looks pristine to show and, hopefully, sell. 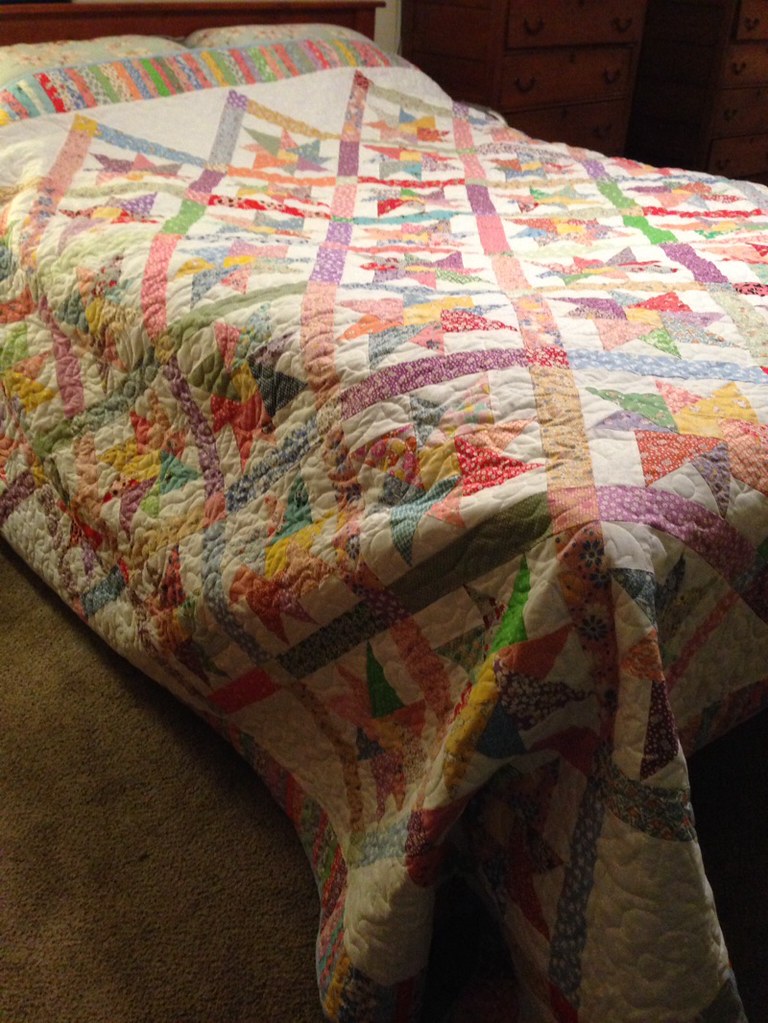 That was an adventure I'm not eager to repeat any time soon. Yes, the outcome was great, but it required a Iot of work especially from my kids. But I've told that story before, too. 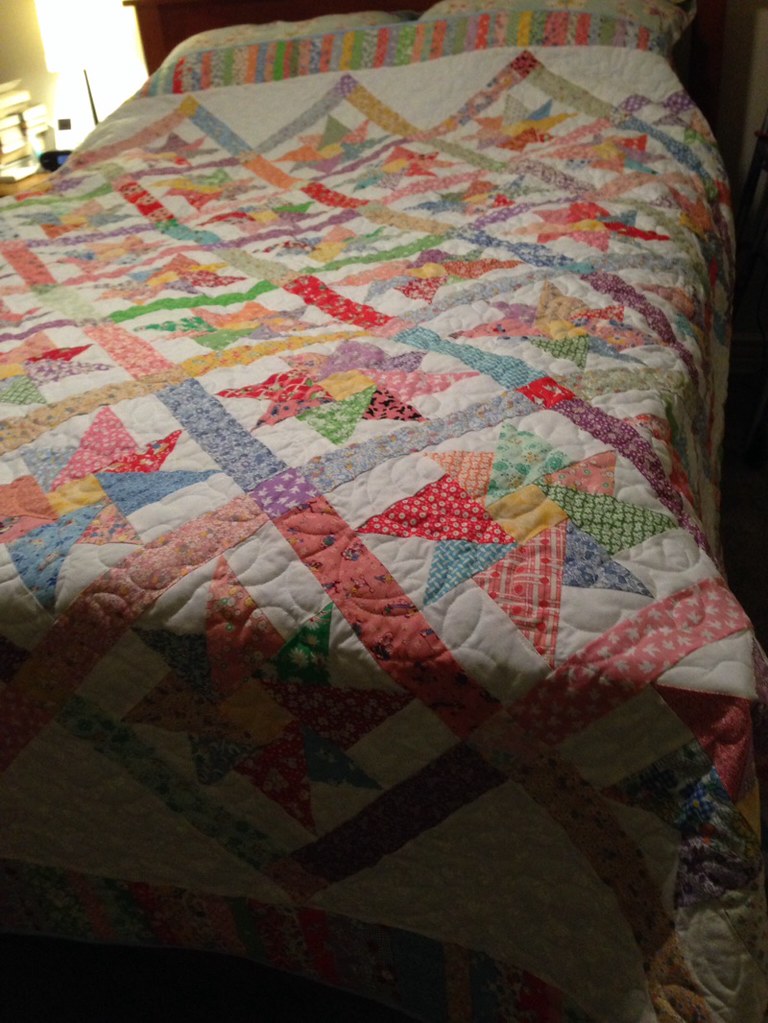 Slowly over the last year, I've been able to get my sewing room up and functioning (with a LOT of help!) and I did get all six tops done.

Took me a while longer to get them all bordered so when these two were done, I sent them off to the longarmers.

More delays due to back issues, but before my surgery was scheduled I was able to get borders on the last four and get them sent off as well.
The first two came back before surgery, so I was able to get the first step of the binding done on them. Now that I'm home and convalescing, I've been able to finish the hand stitching on both of these.

One has blue backing fabric and is quilted with flowers and leaves, a design I think looks good with the 30s prints in the front.
This one has a piano-key border, which seemed like a really good idea for using up scraps. It's a lot of sewing! 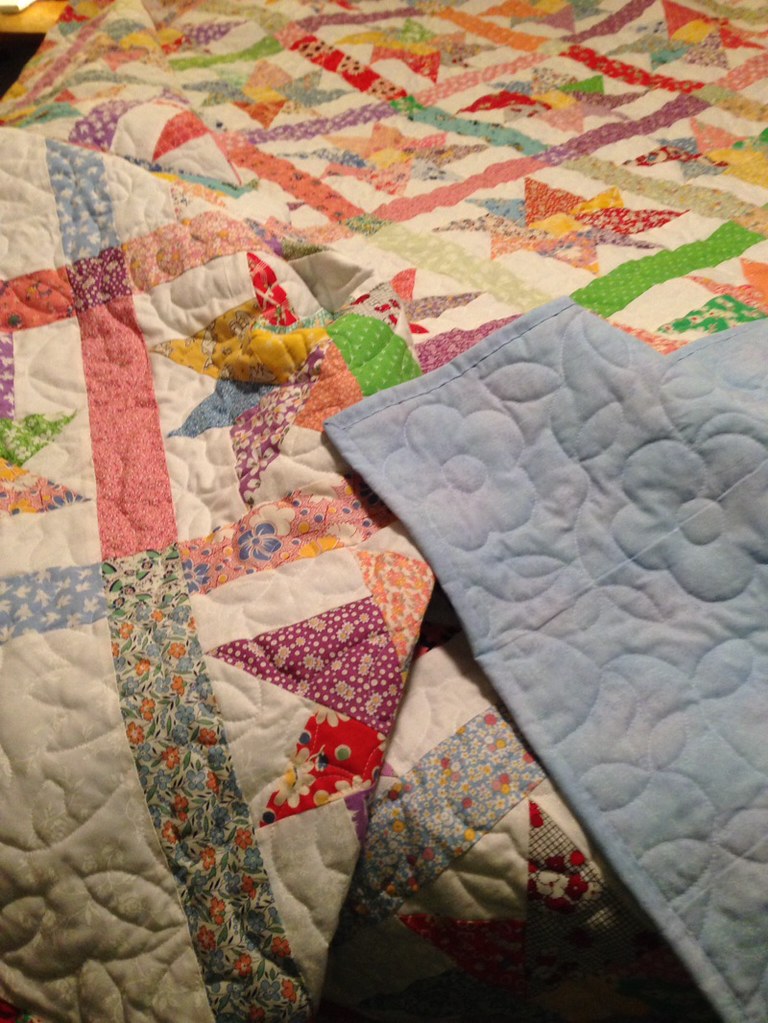 The second one has a border of Flying Geese units. This was inspired by a quilt I had on my bed at the time, a Storm at Sea with geese around the edge.

The quilting on this one is a stylized lily, which I like well enough to have requested it for the other 4.

So now I'm just waiting for the other 4 to come home. In the meantime, of course I've continued working on a couple of other projects and started a new one. You can read my posts about the Mystery Quilt to see more of that--it's using up some more of my 30s fabrics. 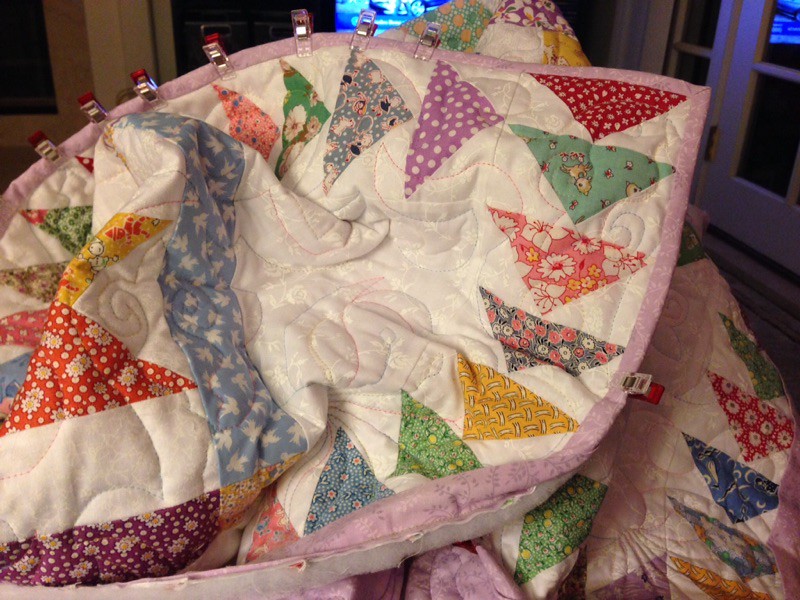 I think I have enough to make a couple more quilts.. Oh dear.

At least my roster of finishes for the year has grown by two more. Not too bad considering that this year was a super busy one!
Posted by mehitabel at 1:31 PM No comments:

Once again sharing my progress with other Mystery Quilters!
Clue Three has a few steps to it... and several choices of how to do them.
I opted to do half-square triangles and trim them down, rather than using specialized rulers. One of the things I love about Bonnie's directions is that she gives you choices. What works for one person may not work for another, and this method works well for me. Plus I have lots of little triangles already sewn. Maybe they'll go in the border. Maybe not.
Here's my lapful of grey catgirl. Now that she's an Only Kitten, she's suddenly my BFF. It's nice to see her out of the closet, out from under the bed, sleeping with me most of the night, and generally being a "real" pet. It's the first time in her 14 years that she gets to do this. Still hides when anyone comes over, though she's been known to sit on Anne's lap. She's a pretty cat and hopefully I'll be able to get some better pictures of her. Look at that adorable little white "ballet slipper" foot!

So back to the sewing... As you see from the first picture, the individual units are now done, trimmed and pressed, ready to join into pairs for a Double Diamond block. They're set aside for that for now... 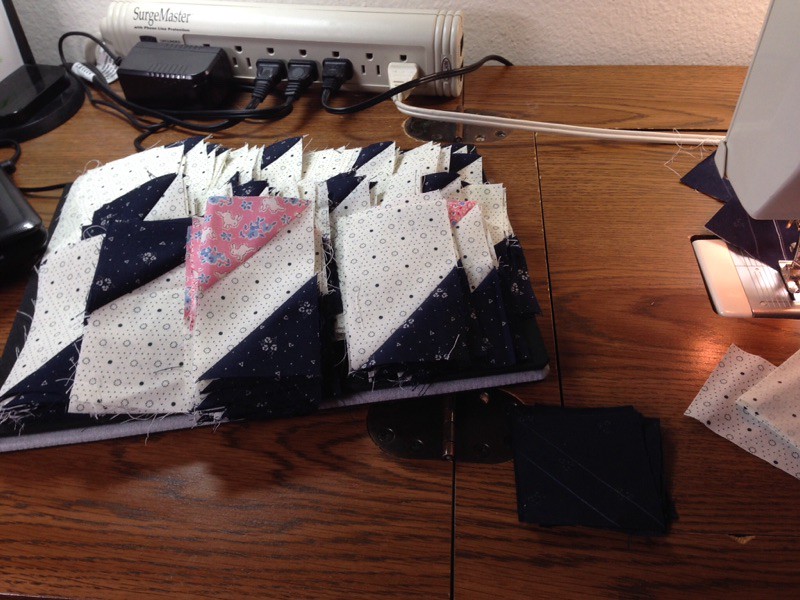 Moving On with the Mystery

Joining the Monday linkup over at Quiltville once again. These are some shots from my prep work on Clue Two, which is currently in progress.

I'll be adding another post with my progress from Clues Three and Four later today (I hope!) but for now, this is an update!

Mondays are often a very productive day for me as far as cutting and pressing and that kind of prep.

My friend Anne comes over and we sit around and sew. Or cut.


Lots of good talk and some kitty petting, too.

Sadly, these are the last pictures I got to take of my beloved Highland (aka HiHi), Quilt Supervisor Extraordinaire.

He was 17 and beginning to fight some of the inevitable ills of aging. He was on two kinds of meds, which was no problem since he loved him some pill pockets.

Later in this same week, though, he stopped eating, stopped taking his pills, and was getting too weak to jump up on the bathroom counters for a drink from the sink.

So now he has crossed the Rainbow Bridge and I hope is reunited with his best buddy Simon. I sure miss him, though.

A last look at the fabrics I'm using for this Clue. I'll have more pics on the next post.